It's day six in our countdown of the best games of 2020, and if you fail to open this door, what lies behind it might change. Better get it right first time.

Graham: At the time of writing, I've played Spelunky 2 for 150 hours and completed it six times. I will play it for at least an hour more today, after or during writing this, and probably more. This is because it's one of the best games of 2020, and one of my favourite games of all time. I think about uninstalling it most days.

Spelunky 2 is about exploring randomly generated levels that are different every time you die, and about using the moveset of a platform game - jumping over traps, jumping onto the heads of enemies - to attempt to not die. There are no progression mechanics, no power curve of unlocks to make you stronger on your 100th attempt than you were on your first. Instead you improve by learning how to navigate Spelunky's complex matrix of interactions between objects, items and enemies.

At the beginning, this means learning how to deal with simple things, like the steep angle of an attacking bat (turn your back, whip behind you). Later it means experimenting with opaque systems, like sacrificing bodies on unexplained altars to win favour from a god. Finally, if you play for long enough, it might mean putting every piece of information you've learned together to complete a chain of secrets and reach hidden worlds with entirely new rules. 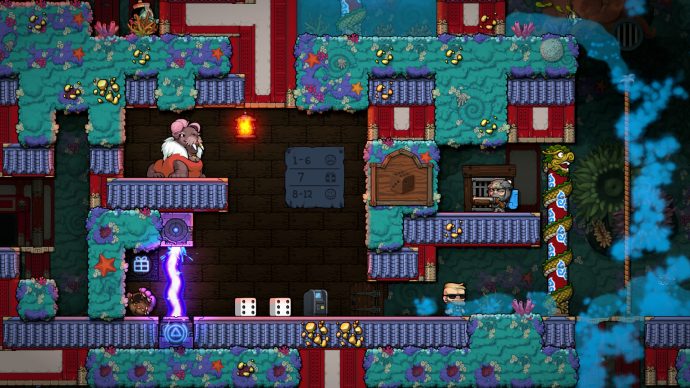 That Spelunky 2 has space for learning and mastery would mean, in normal circumstances, that I'd complete it successfully once and put it down. Fortunately - unfortunately? - it's also an unforgiving git of a game. Even after 150 hours and six completions (five of which were in the past week), every new life feels like a test. I'm better at the game now than I was when I started, and better at Spelunky 2 than I ever was at Spelunky 1, and yet I still regularly die on world 1 or 2. It is tense and rewarding nearly every time.

Sort of. The problem I have is that the rewards have diminished over time. After 150 hours, failure feels more frustrating, and victory feels more like it's establishing a baseline of contentment than delivering a thrilling high. Yet I keep playing it, every day.

Spelunky 2 is undoubtedly one of my favourite games of 2020, and I suspect it'll be one of my favourite games of 2021. I have had over a hundred hours of fun with it, after all, and though it's possible that I've taken everything from it that it has to give me, that's hardly a surrprise after playing it so much. So after a decade of charting my daily relationship with Spelunky and now its sequel, here's where I am today: I love this game, but god, I should give it a rest for a while.