You've gotta fight, for your right, to... fight? Door number twelve is open. 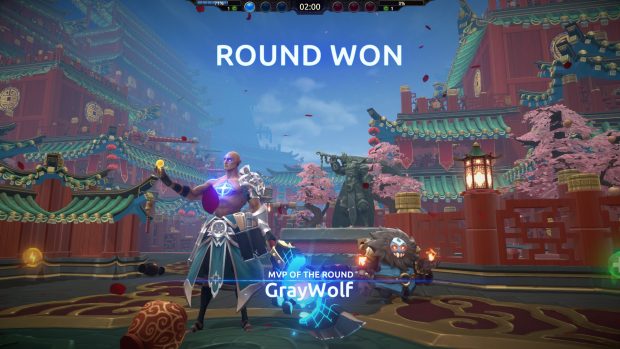 Matt: The creative director at Stunlock Studios described Battlerite to me as ‘the fighting game of the Moba world’, and I can’t think of a better way of putting it. It’s the perfect antidote to the hour long slogs that Dota matches all too often become, offering ten minutes of top-down brawling where reaction speeds, accuracy and psychology are paramount.

As accurate as I think that description is, you know what? Just don't think about the word Moba. That word is loaded with too many connotations at this point, and while a round of Battlerite plays a lot like a teamfight in Dota or League of Legends, there are key differences. Yes, you'll still need to learn the moves of dozens of different characters, but that's nothing compared to the 100+ characters boasted by most Mobas. There are no items or levels to worry about either, which places every player on a level footing from the start of a match to its end.

That means success of failure is distilled into individual moments, rather than as a consequence of decisions you made 30 minutes previously. There's no room for playing passively in Battlerite: each second that you spend in that arena is one where two to three nearby enemies will be trying to kill you.

You don't need to worry about being pigeonholed into a particular role. There are tanks and support characters, sure, but every character has some way of dodging or countering their opponent's moves. Of course it's not as deep as Dota, which is a strength rather than a weakness, but because every single ability needs to be aimed there's a certain sense in which the skill ceiling is even higher.

Testament to that is the way it’s almost as much fun to watch as it is to play. Some of my favourite moments have been when me and someone on the other team were both spectating from the grave, watching the two remaining combatants dance around dodging and countering each other’s abilities. That said, nothing can compete with the rush I get when I’m locked in my own 1v1, and manage to win the round by baiting out my foe’s dodge move then punting them away into the encroaching death zone. Get in the bin, Thorn.