If you click on a link and make a purchase we may receive a small commission. Read our editorial policy.
The Sims 4 Eco Lifestyle review
The Eco Lifestyle expansion adds some of the most interesting stuff The Sims 4 has ever had, but it'd be nice if it was taken to its natural conclusion.

A while back politicians in the UK identified the environment as a key battleground to fight over, and all started riding around on those tiny bikes you can fold up and carry around London to prove they cared about trees. Not to be outdone, EA have, ten years later, released their latest expansion to blockbuster tiny-person life simulation series The Sims 4 along a green theme. Eco Lifestyle adds a new world with three neighbourhoods, a bunch of new Create-a-Sim and build items, and the requisite personality traits, aspirations and skills to go along with being an eco-warrior. The bits that are there are very fun - possibly the most fun I've had with The Sims for a while - but it also feels like parts are missing.

I tested all three of the neighbourhoods in Evergreen Harbour, the new world in which to plop your little code-puppets. Port Promise is probably the most interesting, a post-industrial shithole of a harbour covered in rubbish but, paradoxically, populated almost entirely by people trying to clean it up. One of the fun things Eco Lifestyle adds is a layer of ecological impact to your actions, which are engaging if a little thin. Neighbourhoods now have a collective carbon footprint, as it were, and will show up on the world view either covered in poo-coloured smog or twinkly green god-rays to demonstrate how good your Sims have been at washing their Pot Noodles out before throwing them in the green bins.

This is buttressed by the new NAPs (Neighbourhood Action Plans) that are voted on every week, which change the behaviour of the community. They include fairly normal ideas, like everyone trying to be more self-sufficient, but also fun stuff like nudism, or 'let's all wear paper bags on our heads'. Through these you can also vote for unused community spaces to become gardens, or the disused train station area to be subject to some green initiatives (plants will turn up). As things improve, so does the air quality, and the streets become gradually cleaner.

It's unfortunate that the neighbourhoods still feel quite empty, even though we're supposed to envisage communities pulling together. Conifer Station and Grim's Quarry are suburban neighbourhoods full of identical houses, but they're almost all empty and cannot be affected by the player at all. It feels like a Hollywood set, and if I push one they'll all fall over to reveal they're MDF props. Eco Lifestyle does have four lots designated as flats where your Sim pays rent and lives wall-to-wall with another lot, but these are divided into two lots per block of flats, so it's not exaaaaactly the real thing, is it? Still, I'm sure builders are going to have a lot of fun with both these and the interesting potential for community lots. 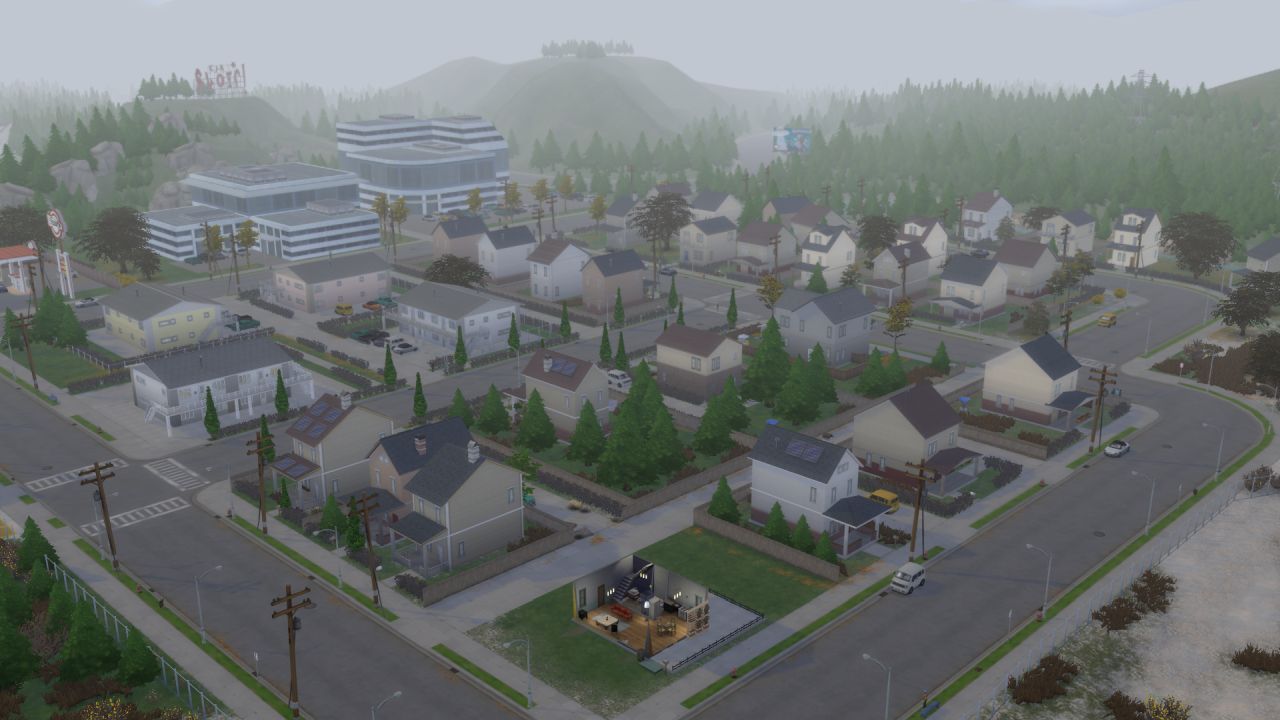 In any case, I had quite a bit of fun with the NAPs, because although you vote using a currency of influence points that you build up (often by doing more of the thing that the previous NAP voted to do) it turns out it is also very easy to use this same invisible currency to manipulate other residents into voting how you want, which is its own simple, maniacal pleasure. Yes, pigs, this is a free love neighbourhood now, whether you like it or not. I am Yennifer from that weird orgy scene in The Witcher, and you are my sex thralls.

In fact, I am actually still playing Britta Horace as my main Sim for this expansion, less elegant witch and more grubby bin goblin. The combination of new personality traits, like Freegan and Recycle Disciple, can make for some really interesting and conflicted Sims. 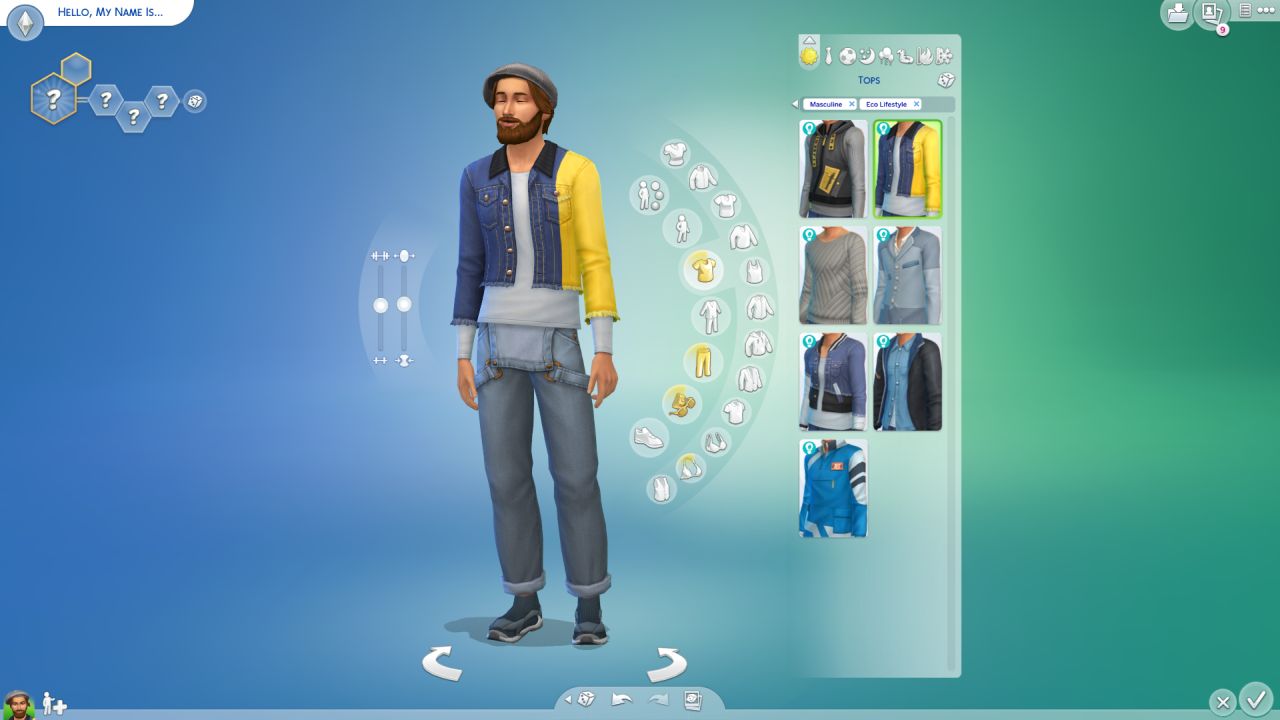 Freegans in particular are really fun, and can finance their entire lives through dumpster diving. They dislike buying anything new, including food, but get a bonus to what they find dumpster diving. Britta dug up not one, but two of the best fridge in the game, which she could sell for many thousands of simoleons each. This, in turn, made Britta angry, because Freegans hate making money too. It is very funny. Currently there seems to be no limit on what you can fish out of your neighbourhood bins; Britta even found a rare frog. I suspect the system is going to be balanced over time, but it's great sending a Sim head first into the trash, not knowing if they'll come up with an old porkchop or a really expensive gaming chair with a bunch of cat scratches all over it.

Aside from the dumpster diving, I've found the new fabrication elements really entertaining. Although I avowed that I wouldn't get into the bougie candlemaking, I totally have, and have harvested some soy beans from a wild plant to grow my own soy - in the new upright garden - and thus create a soy wax production line. Similarly, you can sort compostables and recyclables out of bins to feed your eco-friendly insect farms, or use as components for the fabricator, a big 3D printer. 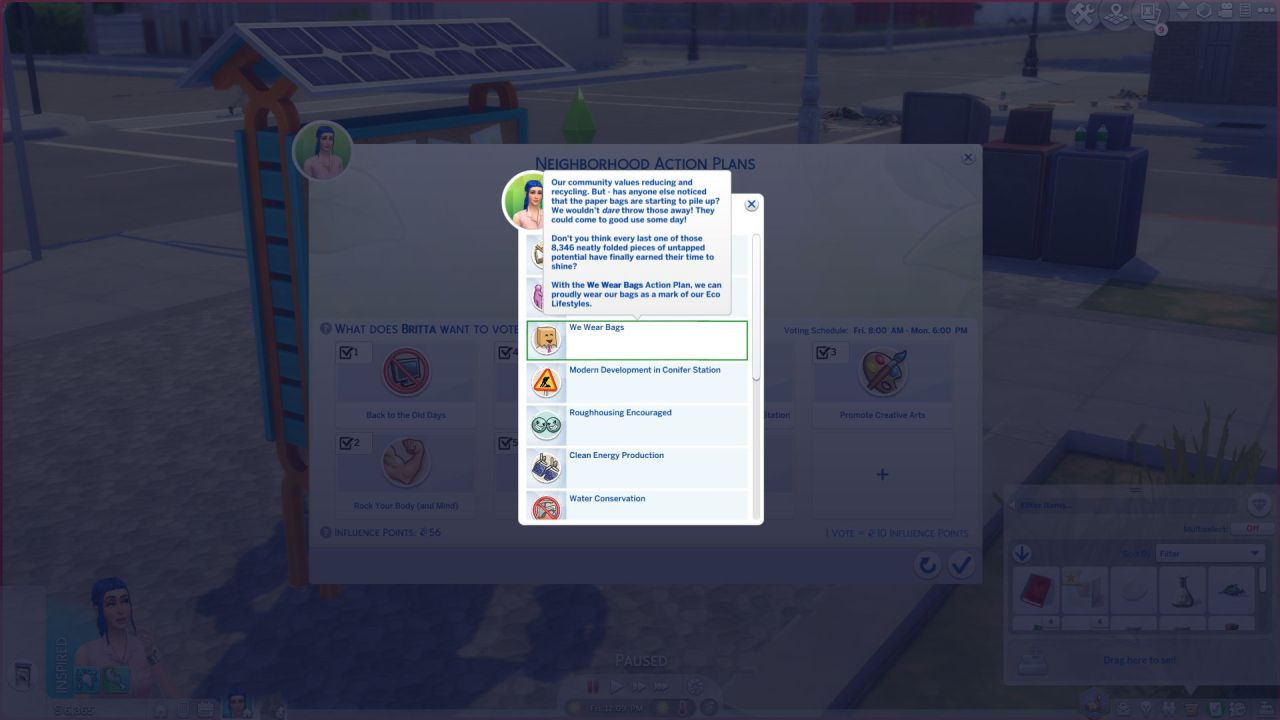 Things like the fabricator, the big home recycler machine, or the wind turbines and dew collectors, have a high initial outlay, but the system is set up that being eco-friendly is eventually its own form of income. Using renewable energy lowers your bills, and eventually you can generate a surplus of energy or water to sell. It's very satisfying making those incremental steps (aided by selling fridges covered in bin juice, obviously).

But at the same time, there are aspects of Eco Lifestyle that feel unfinished. As well adding fun asymmetrical jean-skirts, piercings, and undercut hair in create a Sim, the expansion comes with some new build-and-buy bits - some nice, compact furniture and a few really cute decorations and items of clutter. My favourite bits are swatches for walls that can change the eco-footprint of your house. A grass roof makes it better, whereas shipping container walls make your home more industrial.

And this is cool! But the thing is, these mechanisms point in the direction of living an un-eco lifestyle. Instead of an eco-warrior you could be... whatever the opposite of that is. Some kind of ozone extremist. A post-post-industrialist? I dunno. But the expansion does make gestures towards that all the time. Some of the Sims already living in the neighbourhoods occasionally support modernisation or less eco-friendly NAPs. Instead of solar panels, you can opt for dirty ol' generators to power your home as a cheaper but catastrophically un-eco way to get energy. But there just aren't as many options. 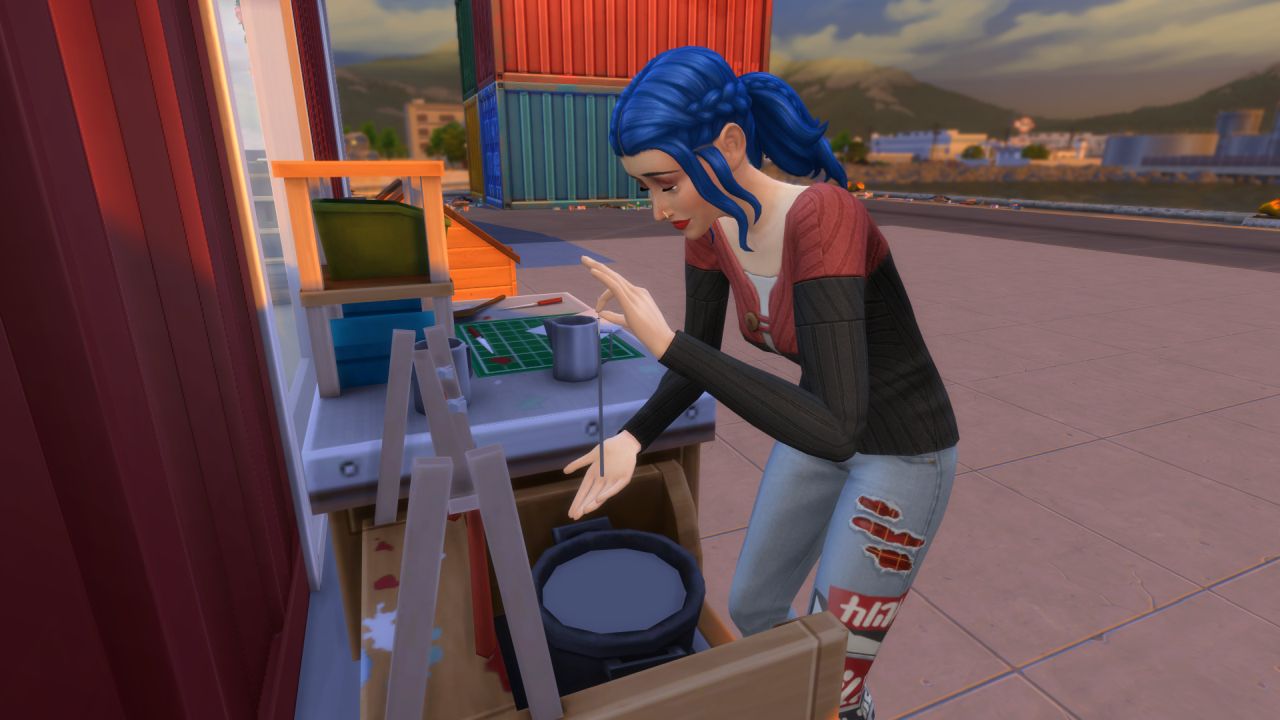 There isn't a character trait for Sims who hate recycling and prefer to burn their plastics (a thing my dad actually does). There's no aspiration to be the Sim version of the evil sludge lord from FernGully. You cannot build a tiny, furious Jeremy Clarkson. I sort of get why, because it's a difficult concept to gamify, isn't it? Plus I suppose we should all be encouraging each other to live more clean and green, and the world already has one Clarkson. But in that case it feels weird that some ways to make your eco-footprint actively, even deliberately worse, still exist without going the full diesel-powered hog.

Britta is currently living in Grim's Quarry, an extremely eco-conscious suburb, and is trying her damnedest to ruin it so she has more trash to crawl through, but it's proving very hard work. There's a sense that progress can only really be made in one direction, but the Sims community has always enjoyed pushing the game to its limits in reverse, too.

You can, of course, turn off most of the environmental impact settings in options, so if you can't be arsed with the energy saving or billowing smog, you don't have to be. But these same systems interlock with the new character traits and objects in really impressive and enjoyable ways, and Eco Lifestyle adds some of the most interesting stuff to The Sims 4 I've ever seen. I just wish they had taken it a bit further towards its natural conclusion.