The Sims 4 is once again courting (mild, predictable) controversy, this time because of the upcoming Star Wars(TM) Journey To Batuu game pack. The DLC itself doesn't arrive for another few days (coming to stores near you on Tuesday the 8th), but Simfluencers like Plumbella have posted preview impressions of it that aren't glowing.

This has not improved the mood of a vocal section of Sims fans, who were already unenthusiastic about Journey To Batuu on the basis that they didn't want it as much as they wanted something else. EA clearly felt the situation had reached some kind of crisis point, because a statement has been put out addressing the "community feedback" the developers have received. Sims players being annoyed at The Sims 4 is frankly pretty business as usual; EA actually responding to it is less so.

The gist of the statement is basically 'look, we're still doing other stuff but this time we've done a Star Wars DLC'. How much you like the idea of the DLC seems to depend on how much you like Star Wars. I do like the space shoots, so I am still cautiously up for it, mostly because I like the new build items. It is hilarious that the alien skins are actually just masks and sexy alien thigh-highs, though. Your alien Sim without clothes on looks like a half-dipped novelty candle, as demonstrated by this screenshot from EnglishSimmer's video. 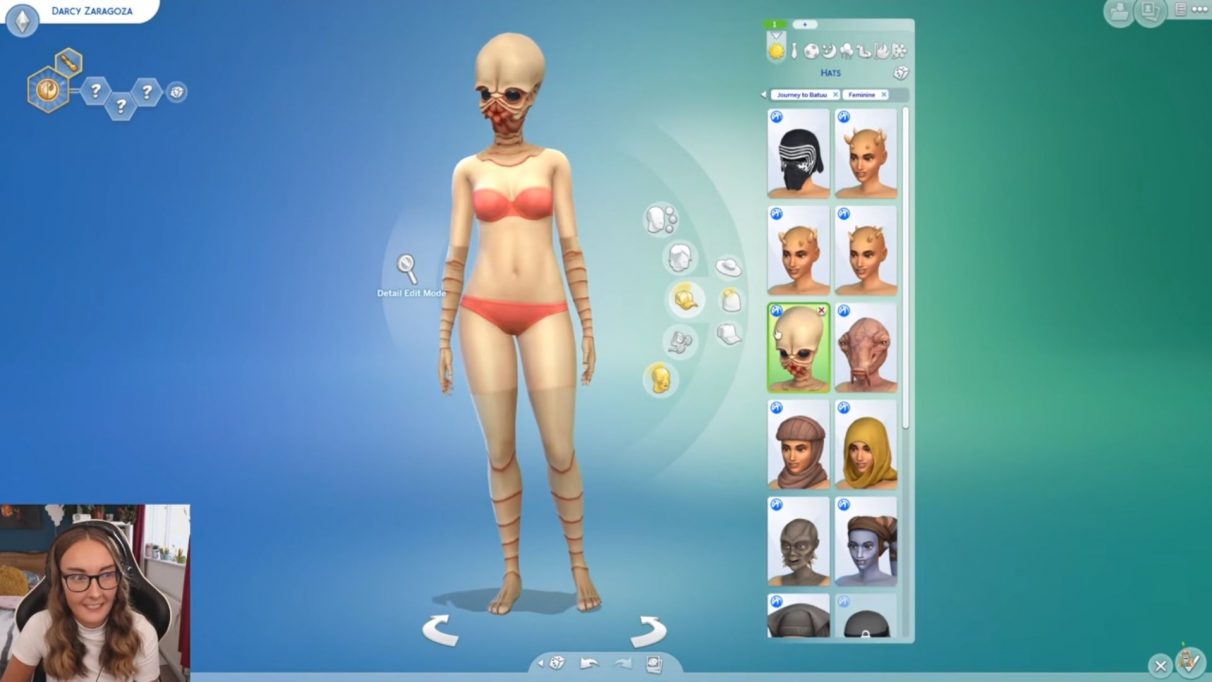 I can see why EA might have expected players to be more vocally excited for Star Wars stuff, because they put a Baby Yoda statuette in the game and people went absolutely fucking nuts for it. But I also share some of the frustrations.

The issue is probably that the reveal of this has collided with existing annoyances. For example, executive producer Lindsay Pearson, who goes by SimGuru Lindsay and signs off on the statement as such, is also the person who made a very sincere video about how the game will be adding new darker skin tones and fix the existing ones on offer.

Different things will be at different stages of development at different times, of course. Journey To Batuu was most likely well into production when that video was made, but despite the statement saying they're still working on the skin tones and that "this is not one step, but a journey", the Star Wars DLC coming out before the diversity-orientated improvements is frustrating to see. Companies got to company, but it obviously makes a Star Wars DLC look like a pure money-spinner in comparison, and undercuts the touchy-feely caring vibe.

Players have also consistently had the same wants for additions to the game for years now, especially when comparing The Sims 4 with previous games in the series. The most frequently requested features cited in EA's statement, are "cars, babies*, farms and bunk beds", all things that I myself would like. This feels like one of those times where the issue is exacerbated by the gulf between what we, the general public, know about development, and what development actually is.

[*babies exist in The Sims 4, but unlike in the older games they're objects that are acted upon and don't count as people until they're toddlers]

The statement points out that when the team is considering additions and updates, "sometimes there is foundational technology we need to work through". Cars existed in previous Sims games, so I could point to that and go "what, like it's hard to make cars?" when in fact yes, it probably is quite hard to introduce a whole new thing into a game with a six year's worth of code stuffed into it like a dangerously full sausage. But for something smaller like a bunk bed? Custom content makers have fashioned working bunk beds, for free, out of spit and code in their bedrooms.

In any case, the statement says that news on the next big expansion pack will be coming in "a matter of weeks" but that "cars, babies, farms and bunk beds are not part of this EP. We understand how important these features are to you but we want to be honest that they are not part of this upcoming pack." So, adjust expectations accordingly.

I think what will inevitably happen is that loads of people will buy this anyway because most Sims players are a silent majority who aren't that bothered, other players will continue to grumble about things, and nothing will have been learned either way. Although it has now been confirmed that you can't shag Rey, Kylo Ren or any of the famous Star Wars NPCs in Journey To Batuu, so we have learned that EA are goddamn cowards.

Alice writes loads about The Sims 4 because she really likes it, so you can find loads of stuff about the latest DLC packs, fun custom content (including our list of the best custom content packs currently available on PC), and the latest Sims 4 news on updates and the inevitable glitches after updates.

We've also got a few guides for the Sims 4, including the all important list of current cheat codes, for when you need to hit that motherlode.