There is an equal and opposite to the internet's Rule 34 which says that if you can imagine it, someone has made it in Minecraft. Players have built castles, Legend of Zelda maps, Westeros, and plenty of very grand cathedrals. Now one of the original cathedral creators is putting its mark on Minecraft: the Catholic church.

Robert Ballecer, a Jesuit priest who has apparently carved out the name "Digital Jesuit" for himself online, has started a Minecraft server for the Vatican. Not to build it. No, just as a place to do all the normal Minecraft things that folks do but in a less "toxic" environment. Folks seem a bit surprised. The Catholic church doesn't exactly have a pro-tech image so a Minecraft server probably sounds out of left field to many people. I'm not Catholic, but I did go to a Catholic school for four years. A Jesuit one specifically, even. If there's one thing I know about Jesuits (but there are still plenty I don't) it's that this kind of dorky merging of tech and faith is extremely their thing.

This apparently all started back in August when Father Ballecer tweeted a poll asking what kind of game server players would want for a community-focused server. Specifically stating that you want a community that isn't "toxic" is usually a great way to ensure the exact folks who fit that description find and flood your service. It may be a bit naive to think that the Vatican's own server would be immune to that problem. It's a nice idea anyhow. There are already gaming communities, some centered around specific games and others specific subsets of a game's community, that are good, wholesome places to be. Father Ballacer's Vatican server certainly wouldn't be the first, but if he's able to lead by example the kind of Minecraft community that he'd like to see, having one more kind place on the internet would be swell.

Ok... I want to spin up a few servers in the Vatican for gamers who want a little less "toxic" and a bit more community.

What should be my first server?

"It's not about the technology. It's not even really about the gaming, it's about getting people together, who can then maybe move those relationships to the real world." Father Bellecer tells Rome Reports. Minecraft is certainly the best of the options from Ballecer's original poll. Rust and ARK are both even more prone to griefing than Minecraft and a church-backed TF2 server just seems like an odd choice. At least in Minecraft, being creative is a goal for most players.

I logged in to Minecraft to see if I could check out the server myself and found that it's currently capped at 20 players. Father Ballacer has since tweeted that he didn't expect an influx of players and is "working on migrating everything to a bigger VM." Right now, you may have to try logging in a few times before a space frees up for you. Once inside though, the Vatican's server looks about like most others. Plus a giant glowstone cross, of course. 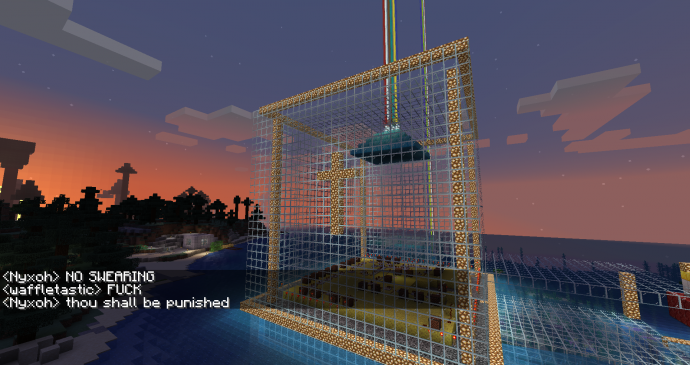 Players have begun building houses and small cobblestone forts as you'd expect anywhere else. That being said, one of the first things I saw when I logged in was someone screaming "FUCK," so Father Ballacer certainly has his work cut out for him to maintain the positive atmosphere he envisioned.

You can take a look yourself by adding a new server to your Minecraft multiplayer with the address minecraft.digitaljesuit.com