It really doesn't feel like it, but it's been five years since Dave Gilbert released one of his splendid point-and-click adventure games, and twelve years since he worked on a brand new story, following his series of Blackwell games. Unavowed is that brand new story, due out later this year, and it's ambitious in ways I wasn't expecting: it's a very traditional-looking adventure, that belies a depth of narrative RPG ideas.

The reason it doesn't feel nearly so long since we last heard from Gilbert is that his Wadjet Eye Games has been publishing other adventure games made using Adventure Game Studio (AGS), with his hand in their development. Really superb games like Shardlight and Technobabylon. He's also voice-directed for other great games, like Kathy Rain. Which is to say, if you see a good commercial AGS game, there's a strong chance Gilbert's had a hand in it. And all the while, he's been quietly working away at Unavowed, pushing at the boundaries of what's usually a very traditional genre.

Unavowed has you playing as someone, from one of three backgrounds, living with the after-effects of a demonic possession. Over the last year your character (male or female) has been waging horrific terror on New York City, and now, finally exorcised, it's time to try to put things right. So you head around the city, accompanied by chosen NPCs, attempting to make good in the fight against the darkness that previously consumed you.

In that preceding paragraph there are a few statements that might have stood out, if you're familiar with the traditional constraints of old-school adventures. AGS is an engine that sees developers tend toward that mid-90s style of point-and-click, a cursor, an inventory, and puzzles to solve. But while Unavowed certainly features all of those, here Gilbert is pushing to include the narrative elements of RPGs, bringing the strengths of two storytelling genres together. Or, as Gilbert puts it himself, tongue-in-cheek: "Ripping off BioWare."

So yes, three different origin stories are available here, setting a subtle form of 'class' for your character. You can be an Actor, Bartender or Cop, each with a unique playable opening tale of how they came to be possessed, and then later influencing their approach to situations and puzzles for the rest of the game. The Actor is adept at lying, convincing people of untrue versions of events. The Bartender has a knack of getting characters to open up and talk about their feelings. The Cop is authoritative, capable of having characters do as they're told.

Further drawing from the BioWare model of RPGs, during the game you'll also be able to choose from a collection of characters to be in your 'party'. There are four others in total, and you can choose two for any particular mission - the game is broken up into distinct sections, each with a character select at the start. Who you bring will, says Gilbert, directly affect how you can approach the puzzles therein. One is a former accountant, now a fire mage (fairly typical career progression), another is an athletic djinn. Then there's a disgraced cop, friendly with members of the police you might meet, and a chap called Logan Cunningham who can talk to ghosts. Everyone in your gang can see ghosts, but only Logan can be heard by them.

So say you've taken the djinn and the cop, and you encounter a ghostie in a park, you'll not have the information and options that would have been available to you had you brought Logan on this trip. But then again, if you'd not brought the djinn then you'd not have had anyone who could leap to reach that ladder, and thus scale that wall. Of course, all of this is played out as a 2D pixel adventure, not requiring any actual athletics. Gilbert's goal is to introduce a lot more variation in how a trad adventure is delivered, importing some of the best RPG tricks, and indeed creating a game that would still be interesting to play after watching someone's stream of it. And for those who've worried just at the sight of the letters "RPG", no, there's no combat at all.

Gilbert's essentially made a number of differing paths through the same game, opening the adventure to genuine replayability, with so many factors affecting how you may approach any given situation. If you'd chosen a different origin, and different companions on that mission, you'd have played parts of it in very different ways. And it will apparently be even more involved, with key decisions made at various points having an impact later on in the story. Do you kill or set free this baddie? That'll have an effect later on.

It sounds an awful lot, and of course all of it will depend entirely on the quality of the story and the writing. But then this is Dave Gilbert, and he's yet to let us down in those areas, so there's good reason to hope. What I've seen certainly suggests good things, with strong voice acting, and even background banter between the NPCs in your party. 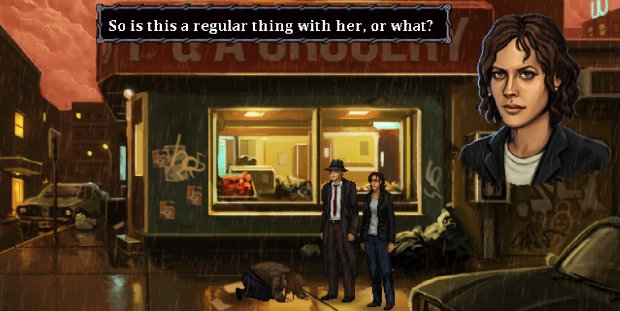 It's a fascinating prospect, taking all the best story elements of the RPG and working them into an adventure. And thanks to some desperately needed advancements in AGS, it looks much lovelier too - twice as many pixels are now available to artist Ben Chandler, and he's done what looks like might be his best work yet.

Due out some point this year, hopefully sooner rather than later, there are a lot of reasons to be very interested in Unavowed, beyond simply that it's a new Dave Gilbert adventure. Although that alone would already have been enough.