You're lucky, readers. It's an optimistic time of year, even for sour-faced mopes like myself, and I damn nearly opened with some lyrics. What can I say? The sun is singing, the birds are shining, and the latest selection of Unknown Pleasures is a zingy blend of drama, carefree fun, and creativity. I for one am feeling inspired.

If everyone plays this, it might become huge, and there's a chance that someone will upload my favourite music into it.

Double Kick Heroes suggests using a Guitar Hero controller well over a decade since that fad died, but fortunately it's a good enough laugh without. Your band is caught at a gig during the zombie apocalypse (I know, I know, me too), but your technician has bolted a massive pair of guns to your truck, then hooked them up to the drums. Naturally there's nothing for it but to cruise across the land fighting off monsters with the power of sick choonz.

Hard rock-with-an-awk is the order of the day, but fortunately it's the catchier, near classical variety rather than the esoteric subgenres, and anyone even half into music would be hard pressed not to get into the mood. There's little to it but rhythmn action crossed with a simple shoot 'em up, and those fun graphics will mostly go to waste as most of your attention is focused on hitting the beats. But it is pretty, and has a fun plot too. There's also the option to add your own music, but you have to set all the beats yourself, so good luck.

One word of parental warning: there really is far more swearing than I expected.

Bomberman is another game that inspires something every other month, but most are exlusively multiplayer and rather slapdash. Bombslinger is a resolutely solo affair, and all the better for it. If you're not familiar with Bomberman, you run around a top-down maze dropping bombs to clear away obstacles and kill monsters, and sometimes yourself.

It also borrows from roguelich (oh no, now that I've said that, someone's going to make that game, aren't they?) shooters with multi-screen maps you have to explore to find an exit, and enemies who drop items, money, and XP, each for upgrading your stats, abilities, and weapons. So once you've charred enough lousy varmints you might opt for more health, or bigger explosions, or the ability to have multiple bombs active.

It's tricky too, with environmental hazards easy to overlook, and enemies with a habit of moving or detonating your bombs. But each type can be outfoxed, and some used to your advantage (gunmen are as lethal to each other as to you, for example), and there's less trial and error than usual - special weapons aren't one-offs but powered by spirit, which enemies drop fairly often.

Normally I take notes now and then in a game. I don't get anywhere close to finishing even the great interactive fiction I play/read for this. But I'd be damned if I was going to quit out of Watch Me Jump before it ended.

It's about a star basketball player called Audra. She's "caught" going to bed with another woman, and a scandal breaks out. But just when I thought it was a simple coming out story, things took a drastic twist, and my perception of Audra gained a whole new, uncomfortable dimension.

It's possibly the only game I know that's based on a play, and it shows. Characters don't tell you their life story, but are quickly established and then developed, taking full advantage of the story's structure. This is split into four quarters, punctuated by flashback scenes. This could have been a gimmick. It's not just pacing that games often struggle with, but communicating to the player what kind of pacing to expect.

I frankly don't want to spoil it. But suffice to say there are several moments where your conversation options are "Be nice" or "Be honest". And at one point you're interrupted before Audra can enact your response, because the point of that decision isn't about gaming the system, but what you want to say. Even if you don't get to say it.

Let's unwind a bit, eh? Autocross Madness is the sort of game I'm sometimes hesitant to include here. You're a car (or possibly a driver, whatever) on a very narrow road suspended over a variety of deadly landscapes. Drive to the end without falling off and you get to blast off the end of the track and explode.

It doesn't even time you, or unlock things, or grant achievements or any of that clutter. There's nothing stopping you from driving slowly and cautiously round every track, so any time you overdo the nitro and skid out of control, it doesn't feel like the game is judging or mocking you, you just bit off more than you could chew.

Controlling the car feels right. The acceleration turns into momentum just when you expect it to, and though frustrating at first, I soon learned to use a light touch, and to treat the velocitator and deceleratrix as equally important, and equally dangerous tools. And the graphics are remarkably fancy for a game that could have looked like Stunt Car Racer.

Oh, but use a controller. Keyboard control is strictly for masochists.

A stealth puzzle game about street art. God I love this era sometimes.

Vandals is a puzzler in which you must sneak past the police on a series of... I suppose boards is the word. You don't move freely, but in single steps across the paths given. Police can see you up to 2 steps away, and will give chase. If you're caught one step in front of them, you're arrested and must try again.

You have a whistle for causing distractions, and can pick up bottles to lob over a distance for the same reason. It's mostly a case of luring police out of the way and calculating where they'll go, and where the safe path lies. If that's all there was to it, you probably wouldn't be reading about it, but the real heart of Vandals is in the graffiti.

You don't just dash to the exit - first you must reach a marked surface and tag it up with whatever you feel like painting. The tools are basic - pick some colours and sizes and that's pretty much it, but within that, anything goes. 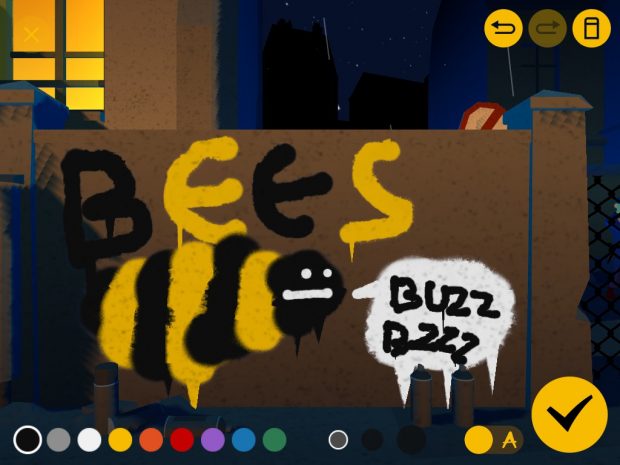 It's tempting to post all the ones I did, even when most were silly in-jokes or historical or hip hop references, and that's why Vandals is here. The addition of the painting is an ideal incentive to keep advancing, doubly so when the police see what you've painted and stare at it, dumbfounded. If you keep getting caught, your paint is automatically restored to the canvas, but after multiple captures it starts to fade and stain with the rain, needling you to be creative once more, and accept that your art will soon be gone. I'm not sure how deliberate this is, but it's totally in keeping with the ephemeral ethos of graffiti.

Pick of the week is Watch Me Jump. 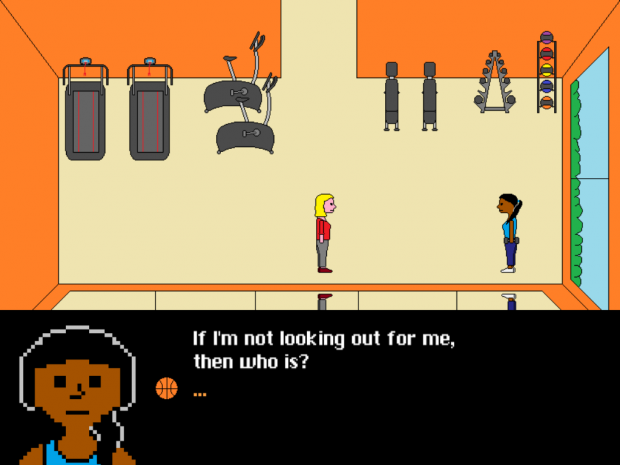 Midway through the story, Audra has a confrontation with a friend. Up until that point I'd been determined to put her above them, but this had me suddenly realise that I kind of knew how they felt. That I'd felt that same horrible disappointment that forces you to withdraw every privilege you'd afforded a friend until now.

And yet at the same time I was angry with them, because it's not Audra's fault that people invest so much in her, and... whew, I could talk about this all night.