It's been a strange week here at the Pleasuredome. Once again, a bud of the Hivemind prepares to detach and spread in-jokes and sinister, fungaloid thoughts about user interfaces to a new, unsuspecting host. And I'd only just confirmed he's real, too. Bye bye, Adam. Subvert from within, yeah?

Still, on the plus side, I high fived Aby Wolf the other night. And now it's time for Unknown Pleasures! Heavens.

Yu Ming has murdered his father. And he might have had a point.

"Young men with daddy issues" is an unspoken cornerstone of games, but I've never seen a game explicitly admitting it before. Typically it gets ignored (if the writers even realised what they've done) or dressed up as positive. Here, we start with a newsreader reporting a brutal killing, speculating about the boy's inherent nature, and then we... enter his own interpretation of his early childhood. School is a land of talking teddies, magical portals, and a giant, terrifying spider woman chasing you with a knife and fork.

It's an adventure game with some light block puzzles, stealth sections, and timing-based combat. Playable bits are bookended by more media speculation and interviews with significant figures throughout Yu Ming's life. Assuming we can believe him, they're all horrible liars, and the media will blindly parrot their "he was just evil and crazy" line. But he's clearly delusional... but then, how much of that is a reaction to trauma? His motives throughout the game are largely about escaping confinement and pursuing justice. But then of course you'd tell yourself that, right?

It's a very strange game, and the translation is a kind of bad that I'd compare to certain subs of God of Cookery, rather than, say, Pathologic. The grammar is awful but comprehensible, and arguably there's a gain in translation that enhances the surreal narrative and imagery.

Ambiguity is for suckers! Space is full of ... you know I'm not even sure. Pirates? Aliens? Whatever, they're hostile and you're here to splat them.

You've two weapons and a couple of special tricks depending on which ship you chose. Controls are strafey rather than the old rotate and thrust, and while the weapon loadout doesn't change, vanquished robo-jerks (maybe?) apparently spend their last moments hastily writing you into their will, as ship parts often spill out of exploding hulls. This element oddly reminds me of a vastly simpler Drox Operative.

Enemies also drop money, and you can scrap unwanted parts for more, and here's where VV does something quite clever. Right clicking on installed parts upgrades them for a cost, but you start out in debt, to pay for your education. With every few waves your debt increases due to interest payments, which vary by difficulty. You could save up and try to pay it all off at once, but the compound interest could get out of hand, and of course it means a weaker ship.

It's a neat system, and more engaging than directly adding points to attributes or gathering XP. Best of all, the shooting and movement are great, and the hostile AI can be really fiendish - each enemy brand behaves differently, and an unexpected combination of them can make things very exciting.

A few clumsy bugs aside, this is one of the best action games I've seen this year.

Someone releases a first-person challenge room puzzler about every 1.5 months, and the results are often respectable, but dull. This one is... it's nice. Rather than the cold, featureless bleagh of a space most put you in, this takes its visuals from Mirror's Edge, with stark white areas complementing bold primary (photic) colours, softly tinted lights, glass panels, and giant windows overlooking neighbouring future-buildings, complete with moving platforms, enormous beams and potted plants.

Oh, right, the game bit. It's the standard setup; a series of rooms that challenge you to open an exit to the next by dropping not-companion cubes in the path of lasers, redirecting or splitting the beams until they touch the right panels. There are rotating platforms, minor anti-gravity bits, weighted buttons, all the kind of thing you'd expect. It's paced well, and the controls prevent a lot of frustration. There are vague mentions of prison, but it eschews the plot-heavy approach, and as far as I can tell you could ignore it altogether.

Soothing sound and pretty aesthetics go a long way, even in what is at heart a simple game. Also I really want one of the big anti-gravity/breathable gelatin cubes. Imagine how lovely it'd be to jump into one of those and just hang there suspended. I'd sleep like a cat. Wait, no, I'd hurl a cat into one, just to see.

A cutesy platformer but also not. The Adventure Pals is silly, funny, faintly subversive, and simply delightful. The villainous Mr. B is kidnapping old people and turning them into hotdogs FOR REASONS. One of those kidnapped people is yer da, so you set off with your wooden sword and giraffe friend to stop him. 2D platforming bits have you running, wall jumping, headstomping, and cheerily bashing bandits and exploding balloon monsters, and a light adventure structure has you trotting amusingly about on your giraffe in between levels.

Battering baddies grants xp and money, which unlock perks for you or your supporting cast (eg. Mr Rock, who trots after you most endearingly, can rescue you from spike pits), or allow you to buy bombs to fling at groups or big'uns. Or groups of big'uns. Or just to see stuff explode, because the animation and sound are absolutely gorgeous and deliver more satisfaction and entertainment than even the most realistic po-faced Lance Corporal Growlshoot type games.

The humour is self-aware and good-hearted enough to avoid both LOL RANDIM and saccharine territory, and it's been a long time since a platformer made me chuckle so many times, both via its dialogue and slapstick. There are groups of hostile cuties (gosh, who else has imitated Adventure Time and not just embarrassed themselves?), and if you beat up the majority of a gang, the remainder will panic and run away. Let us never again accept any excuses from games that do not include this.

It might be a bit early for this, as the devs say there's plenty more to come, and based on what they have so far I'd be surprised if they can't at the very least deliver lots more levels.

Cefore is a physics puzzle game where the goal is to bring data cubes within range of a small doodad you install on the ground. Starting out with that most consequence-free of tools, the bomb, you gather a box of tricks that can be used however you like to bring the cubes together. Attach a winch to a supporting block and then to the floor and you can tug down the wall. Or you can use the sticky warp thing to connect a few blocks, then you can bomb the tower without scattering them apart. There's an undo button too, which can be a real paracetamol.

There's a sandbox option, which is too sandbox for my taste - you don't get a box, just the sand, so unless you have the patience for building something up before bringing it to nitroglycerous justice, you might want to wait for more levels.

Pick of the Week is The Adventure Pals. 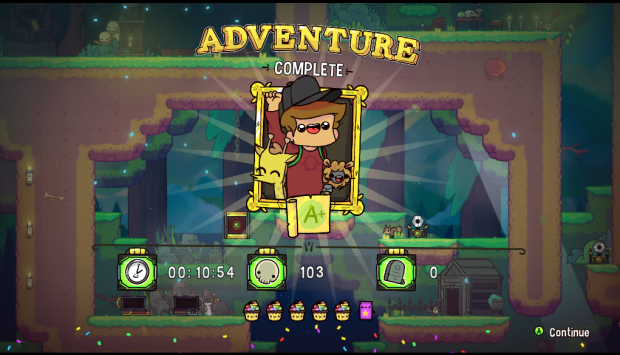 It was the first I played this time, and it wasn't the funny intro or the fighting or bouncing that did it. It was early on, when I noticed you could bash birds and sheep for extra money. I started chasing a nearby rabbit and it escaped me by doing a forward flip. Sometimes you just know.

What I didn't know was that this did the rounds at Rezzed last week. I wasn't there, you see, I just showed up at the drinks afterwards because I am rebellious and cool, and not such a recluse that my own editor didn't recognise me, or anything.