It has been a trying week, pleasure seekers (Okay, we're not using that one again - Ed). A lovely weekend in Wales did not prepare me for a week of kafkaesque negotiating with my PC and router and whatever transdimensional demons were squatting in between them. And of course, this week everyone agreed to stop releasing tiny platformers made in Paint in favour of 5Gb monstrosities. Confound those indie rascals.

Fortunately, they also released a fine crop of clever and intuitive games, easily grasped but with that tantalising complexity that makes Unknown Pleasures such a joy.

If there's one big hurdle most twin stick shooters fall at, it's making the weapons and their impact feel right. Crazy Appliances clears it despite a bit of a graze. You dash around blasting hostile office appliances with your two weapons, clearing somewhat randomised levels and oddly random bosses, hoovering up money to pay for better stats and gear. Ammunition is a concern, and actually one regular problem I had - ammo tends to either drop constantly or not at all, exacerbating my natural Good Ammo hoarding instinct, and in one instance leaving me stuck in a boss fight I couldn't win because there weren't enough bullets to finish the job.

It's here because the fundamentals are already quite sound. Struck enemies and clutter alike shatter most enjoyably, and prone as I am to grumble about Early Access, nailing down the other parts is exactly the sort of thing it's good for.

Typically described as "Terraria meets Skyrim", it's a 2D platformer about gathering resources, building up a little village, exploring, running errands, and whalloping people with swords and hammers and throwing axes.

This could sound a bit kitchen sink, but the core is fighting and exploring the world map by spending food to travel about and see what's going on. Most spots have goblins or kobolds or angry guys who are really into skull-based crafts, so naturally you'll have to stab them and smash up their stuff. NPCs will reward you with resources or offer their services or labour in gathering things from sites you've cleared. As you butcher your way across the land you'll unlock stabbing skills and acquire wood, iron, leather and all that as a by-product, to knock up better buildings and improve your equipment, so you can more effectively butcher your way across the land and oh god we're going to die and turn to mulch it's all futile.

I'm being unfair. Regions of Ruin does away with the grind and the faffing about of the usual survival/gather game, and makes all that supplementary to its fun, tricky clobbering. It's done well, although the tiny graphics can make some of the more frantic fights a bit tricky to parse.

This may be disqualified from Minimalist Puzzle Game of the Week on a technicality, but the judges are still arguing over whether "minimalist" covers structure or art presentation. Kenshō is a very simple colour-matcher in which you tilt a grid cardinally, causing the tiles within to slide about, and a new one to fall in. Align three or more and they'll disappear, but rather than accruing points, your goal is to retrieve keys by matching the block they're stuck in.

Complications arise with unmatchable blocks, some immobile, and limitations on the directions a key can be matched in, but it all remains straightforward. Failure occurs if the grid fills up, which can sneak up on you after a confidence-inspiring early few levels, but it's a mere brief setback. Some strategy is required in balancing your desire to move tiles with where you want incoming ones to land, but it's a calming game with an absolutely gorgeous art style that may well be the most beautiful puzzle game I've ever seen. Levels are bookended by gorgeous cut scenes about floaty sentient cubes and lotus flowers and a deer and lord only knows what the hell is going on. But it really does make for a delightful experience far removed from the somewhat cold style we normally feature here.

Someone's only gone and made a game about salvage, something I've sorely wanted for years. Last time this happened it was survival games, and that ballooned into a fad that, poetically, will not die. I have mixed feelings.

You're a space dude with a wee ship who's stumbled across some strange readings on an unexplored planet. Being a savvy operator, you've decided not to blindly walk in there to get your face humped off by the alien version of Piers Morgan, but to park in orbit and send your remote probe to explore so you can flog some salvage before the scientists show up.

You do this by interacting with the ship's computers, physically moving around from room to room in first-person, and it's this that makes it work so well. Where games like Duskers and Deadnaught made the interface an obstacle, Scavenger SV-4 feels much more like a real operation. The probe must be driven manually but launches and returns via automated sequences that you can leave running while you get on with something else, such as checking up on research your laboratory runs on retrieved artifacts, or keeping an eye on your computers and body as both deteriorate due to the high levels of radiation. The goal is to gather as much valuable material and information as you can before either you or your ship take a fatal dose, and when this happens is entirely down to your judgement. Each playthrough is different, meaning different equipment for your probe (it runs off modules you can refit as you like), and varying degrees of profitability, although obviously you're doing much the same things throughout. I'd dearly love to see more of this.

Flight simulators are a difficult proposition. Most are content to court a dedicated niche audience who are happy with esoteric controls and complex systems, so this one was a real treat.

The technical term for your ship is a rotatey cool thrust jet thingy, and you use this to fly about an alien planet, ferrying goods and passengers between human colonies for money and fun. Gravity and inertia and wind are big factors, making much of the challenge in taking off and landing without embarassing yourself too much. I've complained before about trading games of this ilk being just a grind, but Frontier Pilot Simulator solves that problem by making the flight itself rewarding and satisfying. The flight controls are straightforward, though the trade menus need work and there's a lot of confusing clutter on screen, all of which needs some configuration options. Hopefully this will all be ironed out during the Early Access period, as there's certainly a lot of potential here, although the pricetag is chunky.

For now, there's already the core of an enjoyable flying game here, with a light cargo delivery sim for structure. I particularly like that you can (and must, if your landings are as haphazard as mine) taxi about the bases between loading bays, and that repairs and upgrades happen in real time in big robotic hangars. It emphasises that this is about the flying and the lifestyle, rather than dull columns of numbers.

Oh, but use a gamepad. Mouse/keyboard control could get messy.

Pick of the week: I'm excercising my niche audience rights. It's Scavenger SV-4. 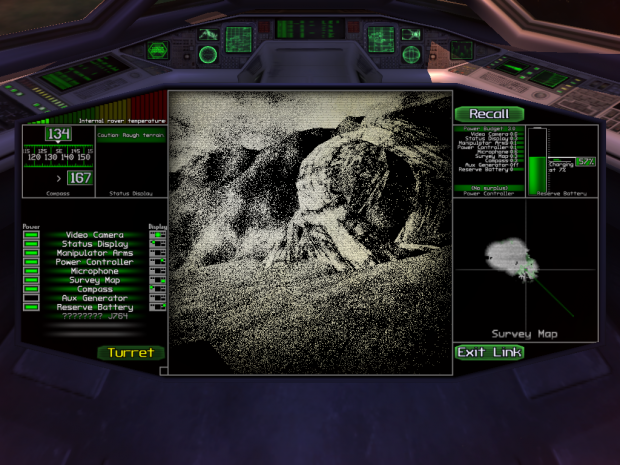 It's tempting to judge it based on what I could see it becoming or inspiring, especially as one of my pipe dream games. But this is still a unique, immersive game doing something original very well. It could easily have been tedious or needlessly fiddly, but everything is just as complex and as responsive as it ought to be, and there's something refreshing about how it trusts your judgement instead of using a doomsday clock.