Darkness again casts its protective cooling veil over us, and we leave the caverns to sift through the desert. As we spear lizards for sustenance, elders play cruel tricks on the children, telling tales of a mythical land where sunlight was pleasant, plants were green, and water fell from the sky. Madness. The heat claims all in time.

But anyway. Don't think about the impending doom of all beings. It's time for Unknown Pleasures!

Ushering in the First Age of Sand this week: wraith dodging, Golgafrinchan skulduggery, and going to page 23. Sort of.

Ark Noir is a curious hybrid of survival horror, roguelike, and dungeon... escape, I suppose. As opposed to delving into some corpsey hellhole like an idiot, you're escaping from the lowest deck of a sinking ship. Said ship is one of two arks meant to ferry a whole civilisation to a new, less collapse-y landmass, but of course something has gone terribly wrong, leaving you stuck below decks with a pack of angry monsters.

Each deck consists of 100 steps. You can only move forward, with most steps empty, but encounters possible at any of them. Every ten steps grants 'fortune' points, which can be spent on searching for items, running from battle, or rescuing over survivors, which double as plot events and, along with defeating monsters, help you level up. It's a simple game and all the better for it. Battles are short and very light on rules, and while the route is the same for each playable character, their varying strengths liven things up a bit, and each uncovers their own angle on the plot. It does that thing where you can unlock perks for subsequent playthroughs, making your first go basically doomed, which can be annoying. But the drip feeding of plot makes replaying it worthwhile, and I like that digging into the setting is essentially optional, rather than lectured at you constantly like every other JRPG ever. YES ALL OF THEM LITERALLY EVERY SINGLE ONE.

This is one of those games that annoyed and frustrated me for the first ten minutes or so, and I kept thinking I was annoyed until I realised about an hour in that I didn't want to stop playing.

It's a single screen action thing where you dispatch waves of nasties until you die. Simple. Hold the left button to move, and click the right button to dash and slash in that direction. Repeat until everything is dead, or, more likely, you are. Success grants a trickle of souls that are spent upgrading your little slashman with more health, stamina and so on, and alternative characters are unlocked if you survive long enough.

It does a good job of mixing things up with a few simple changes in monster behaviour as you progress. My main complaint is that the hit detection on the wraiths feels a bit off, but then you're not supposed to go near the wraiths at all, so maybe that's working as intended.

It's always tempting to talk about games like this by underselling them with disclaimers like "it's nothing spectacular but-". I'm gonna try to stop doing that, because the bottom line is Slash or Die is a clean and simple monster splatting fun with exactly the right level of challenge.

A little bit like Slash or Die, Rifter generates the positive, encouraging kind of frustration that has you keep trying. It's a gorgeous, very fast platformer that encourages (and generally enables) constant movement via swinging, launching your little neon sprinter into things that propel you on again, and doing mid-air dashes to avoid and splat enemies.

The movement is everything. Momentum is half the game - you're even automatically moved to the next level instead of being taken back to the level select screen like a lot of games would do. It's a nice touch. While it's difficult to get your run perfect, it's not so demanding that it becomes punishing or tedious. A lot of hard games have a tiresome, obnoxious attitude to the player, but Rifter is lighthearted and colourful and generally wants you to have a good time. Just like everyone did in the 80s, when everything was made of pink neon and synthwave, and the only way to make a living was seeking out dimensional rifts on alien worlds and repeatedly smashing your entire body into them until they exploded.

Being old is weird, kids.

Essentially a port of three of the old Fighting Fantasy choose your own adventure style books (apparently™ that phrase® was branded©™) from the 80s/early 90s. Except that unlike in the books, here you have to actually use the dice like a dork and not just assume you survived, because come on, who has time to re-read the first 12 pages 20 times just because some stupid numbers said so?

It works well on a PC, thanks in part to the decent presentation. You're directed along a broadly linear path but with frequent decisions to make about the exact route and which items or rooms to explore or ignore. Encounters are usually traps or monsters, which are resolved by throwing your skill or your luck dice and hoping for the best. It's heavily luck based, as is kind of the whole point of the excercise. To mitigate this somewhat you have multiples lives, going back to the beginning when your stamina/health runs out, but with your inventory intact and most encounters reset. The downside of this is a lot of repetition, which in the age of ubiquitous roguelikes will probably be an upside to many.

The general idea is to make decisions that will hopefully protect against bad luck and tip odds in your favour, but there's a fair bit of shrugging and blind 50/50 guessing. Still, it's not cruel with it, and I was surprised by how tense some fights were getting, and cheered aloud in triumph more than once. Fun stuff, even if, like me, you never touched the original books.

I don't like using my microphone at the best of times, so when it turned out mine is still working despite going unused since December and dangling out of the headset with visibly severed and exposed wires, I was not overjoyed. It's mandatory for Stifled, a walking simulator with a horror element in which you explore via echolocation. The environment is whited or blacked out except for around active sources of noise, including your footsteps or whatever you say into the microphone.

"Explore" is a bit of a stretch, as there's only one path for the most part, and the environments aren't exactly imaginative. But the minimalist line-drawing sort of art style gives it a novel atmosphere, and the shrieking monsters you have to avoid and distract by throwing stuff are all the more creepy for being drawn so simply. In principle there's a tension between needing to make noise to navigate and monsters being drawn to noise, but in practice it's not hard to trick them. And I still feel like an idiot sitting there talking to my PC, so took to holding the mic in my mouth and gently coughing instead. Buuut you might not be so self-conscious, and even I was getting into it before long anyway. Although I did find it hard to connect with the player character, as he apparently married a woman who fries and serves the egg on a cold plate before she even starts cooking the bacon. But they have three bathrooms and a spare room with a concert piano. I know what's really going on here.

Oh, and you can do it in VR too, if you're one of those people.

Pick of the Week: it's Rifter. 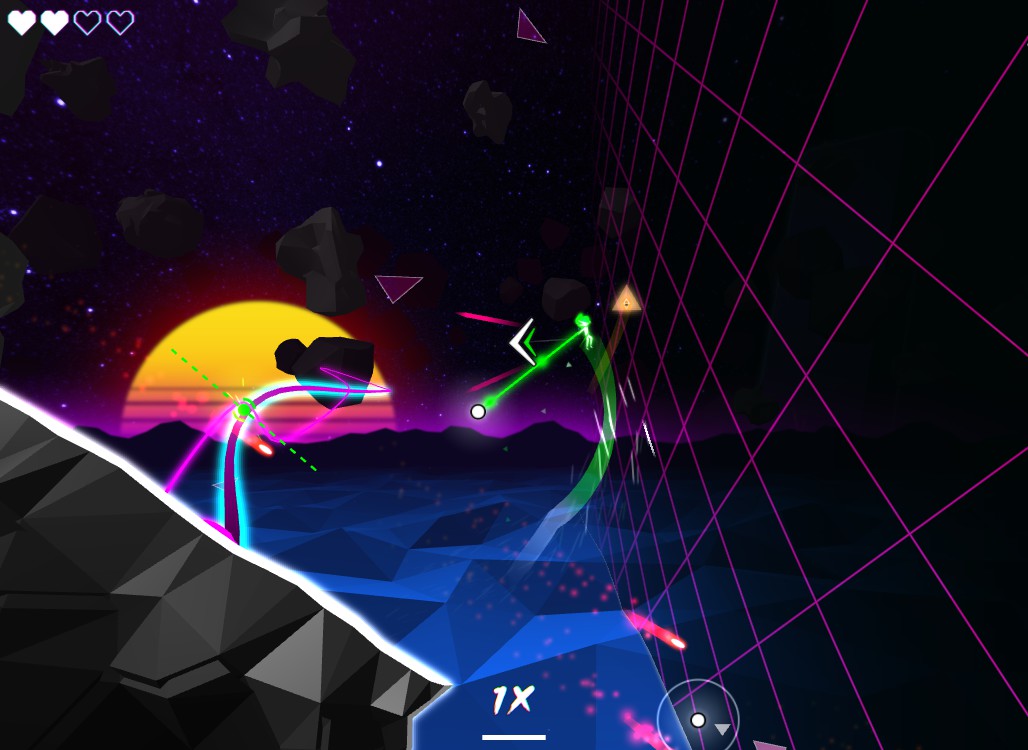 I can't really fault Rifter. It's super stylish, and its use of colour, exciting music, movement, and simple but rewarding controls is really impressive. It's challenging rather than demanding, and gives you just enough breathing room to do things imperfectly or flap about a bit here and there without instantly sucking the wind out of your sails.

Oh, sorry, I should explain. "Sails" are theoretical devices used to steer a sandbarge if were to somehow find itself on a huge body of water. A ridiculous notion, frankly.