Somehow, bank holidays always sneak up on me. You'd think after years of working for councils and universities I'd have figured them out by now, but nope. I remain completely flummoxed by the concept of time this week. What year is it? What are mornings? Why is everything in Britain still open exclusively when you can't bloody get to it?

Games, of course, do not recognise holidays. The tubes emit games, so many games, whether we're here or not. It is time then, to wade through the stream, and pick out the very best under-covered new games on Steam. It's Unknown Pleasures.

Maybe I was feeling especially fragile, but Knights and Bikes is so adorable I struggled not to tear up in the office this week. It's this perfectly childlike blend of boisterous noise and conviction with delicate feelings and worries and powerlessness.

Demelza is a teeny child who lives on an island off the coast of Cornwall, with her dad, in the 1980s. Fear not: there is no neon in sight, but instead one of those charming, crap holiday resorts with a cheerful punk rock intro and He-Man toy adverts (aka "episodes") on the tv. She meets Nessa, a stranger who accidentally stows away on a spare caravan while looking for somewhere to sleep. They immediately become friends. Because that's just how it works sometimes. But they don't quite trust each other yet, and they argue and ask probing questions and completely ignore massive issues that adults would make a big fuss about. When some of those adult things start to peek through into their world, they go on an adventure together to find treasure and save the island. Probably entirely in their heads, because what can they do, really?

When Demelza sprints she makes motorbike noises with her mouth. You heal with plasters when you high five. "I'm not from here, I don't just have things", says Nessa at one point. Demelza's first item is a pair of wellies that let you stamp in puddles "for splash damage". Nessa intrudes on a private space by accident and when she realises how much it means to Demelza, she just... she just puts her hand on her back for a moment and says sorry.

I am going to have to step outside for a moment. Excuse me.

In soulless game robot terms, it's a simple top(ish) down action game where you fight monsters and ghosts and evil bulldozers by kicking or throwing frisbees, switching back and forth depending on which character's attacks you need. The computer, or another player, controls the other one in the meantime. It's not difficult, and there's a lot of running about just to trigger the next bit of dialogue or reach the next area.

With all the 80s revival stuff going on, it's about time we had a retro ninja beat 'em up. Thanks to the suddenly massive influence of Japanese business and culture on the US, ninjas were the 1980s, to the point where various idiots in the press and politics had a full on xenophobic panic about them. So, Pixel Hero: Nine Baddies of Mamoru, then.

You're wearing black pyjamas, so obviously you're a ninja. Your job is to defend your village by leaping about the treetops hacking up bandits, until you're skillo enough to face bigger threats from the sinister Daimyo and his increasingly demonic army. There's a surprisingly involved crafting element, as you buy recipes and ingredients and smush them together into bombs, caltrops, and sexier blades, as well as dozens of unlockable skills. The game encourages stealthy assassinations but (in the opening hour at least) doesn't punish a direct approach, or even putting away your sword. Indeed, there's a chain of unlockable skills focused on the noble art of kicking a bandit's tits off. Punching does less damage, but tends to stun and knock people back, and both it and the staple sword attacks are delightfully effective.

Money is dropped quite generously, should you favour lobbing knives about, and although it's a challenging game, I feel like it wants to you have a good time from the off. Most attacks have noticeable follow through, making careful timing more important than memorising patterns. The controls did bother me slightly, as wall climbing feels just a little bit uncomfortable, and combining attacks, blocks and jumps didn't quite gel as fully as its fast movement and animation suggested. This could well be something I just need to practice at a bit, however, and I didn't tire of slashing and uppercutting my way through a level's worth of mooks again.

Dice in games are generally Not My Thing, but this one uses them in an interesting way. You're a ship's captain of dubious sanity, tasked with clearing the Atlantic ocean of those sea creatures you'd see on medieval maps. It's a really fun idea, and although I wouldn't call it particularly funny, Here Be Dragons is consistently silly. Your tutorial, for example, has you sinking fishermen and life rafts that your first mate insists are very lifelike mannequins. They return fire by shouting sasseny rasseny insults. The linear campaign soon moves you onto attacking whales, then tridenty sea grumps, and the odd human fleet.

Combat is turn based and esoteric enough to take some getting used to. Each turn, a dice (shhhh) is rolled for each ship - spat out by an urchin, which to be honest just adds a slightly irksome delay - and whoever has the initiative picks which of the resulting dies will go into which slot on their ships. Each slot corresponds to an attack, ability, or stat upgrade, but only specific ranges of numbers can fit. Say your ship can fire a broadside if you put a 1-4 in that slot. But it could also repair for a 1 or 2, or put a 4-6 in its attack upgrade slot for a damage boost. Some abilities require multiple dices, and your ships are damaged for anything you leave in the pool. Finally, the sum of numbers you use dictates who has initiative on the next turn. All this gives it a strong puzzley flavour, and though somewhat complex, the battles are small enough to keep things manageable.

It's Interactive Fiction of the weeeeek! I bombarded the RPS slack with lines from this, to a sea of stony faces. Well, they can't stop us. Laura Silver is a delightful story about a pair of paranormal investigators / monster hunters investigating a Vodník attack in 1930s Czechoslovakia. She is an odd woman and I adore her. One of your own colleagues is a bit shirty when you show up at his hotel, and you can respond by pulling a gun on him to shut him up. Your assistant stops you, but that just made me more determined to wave it around at the slightest provocation (THE CHEF HAS A KNIFE!)

Laura is sour, stubborn, openly paranoid, and just the absolute best. The monster story takes a back seat at first as you're introduced to the premise and characters, most of whom are supposed to think you're a film crew (which makes her hostility and trigger happiness all the more inappropriate and amusing). This is set up expertly, telling you the basics of what's going on as it establishes character relationships, and opens enough questions to pique curiosity about both the overall plot and the organisation you work for. Production values are excellent. Screens are less static than most visual novels. As with Heart Of The Woods, just a few little motions make all the difference, and it's surprising how much difference it makes that the characters' mouths move when they talk, but it helps too that the artwork is gorgeous, and the gentle typewriter sound effects as text appears fill in what would be awkward silence or annoying music in many other games.

There's a moment where Laura is offered tea, and asks for "earl brown", which of course everyone politely corrects her about. "I know what I said", Laura replies, and later, to herself "I can't believe they don't know about earl brown". It's rare for a game to capture this kind of intelligent-but-sort-of-dopey personality instead of going full LOL RANDIM.

Plunge! Pluuuuuuunge. Plunnnnnnge. Wow I do not get to say 'plunge' enough. I also don't often grasp a slightly unusual game this immediately. Plunge is really easy to get into, and remarkably fair for a roguelike. You're the billionth prisoner of... somewhere, and decide to escape by going down instead of up. A randomised series of isometric levels follow, dotted with guards and dogs and spikes and the occasional boss.

There's a type of puzzle game where you slide about a grid, unable to change direction until you hit a wall or object. Plunge is one of those crossed with a turn based fighty roguelike. You must glide over the key then to the exit, usually (but not necessarily) killing the guards by sliding into them too. Most take a couple of hits, and will hit back if you're in the wrong position. Some have shields, so must be flanked and then finished off when they raise the shield to attack. Some chuck spears or gas clouds, but you're always notified when a square is in danger on the next turn, which I didn't initially catch on means you can also trick people into hitting each other. It's generous enough to let you "pass" a turn by moving into an occupied square, an often vital trick, since as you've probably already figured out, manipulating enemy behaviour is half the game.

It's an incredibly smooth combination of ideas, with an appealing art style and no wasted time at all. My only real complaint is that the isometric perspective demands you use only diagonals, which is slightly awkward and, with a controller, sometimes frustrating. Oh, and the gas traps that reverse your controls for a turn are the worst thing in the world.

Pick of the week: Laura Silver is fab, but you probably already guessed it's lost out to Knights and Bikes. 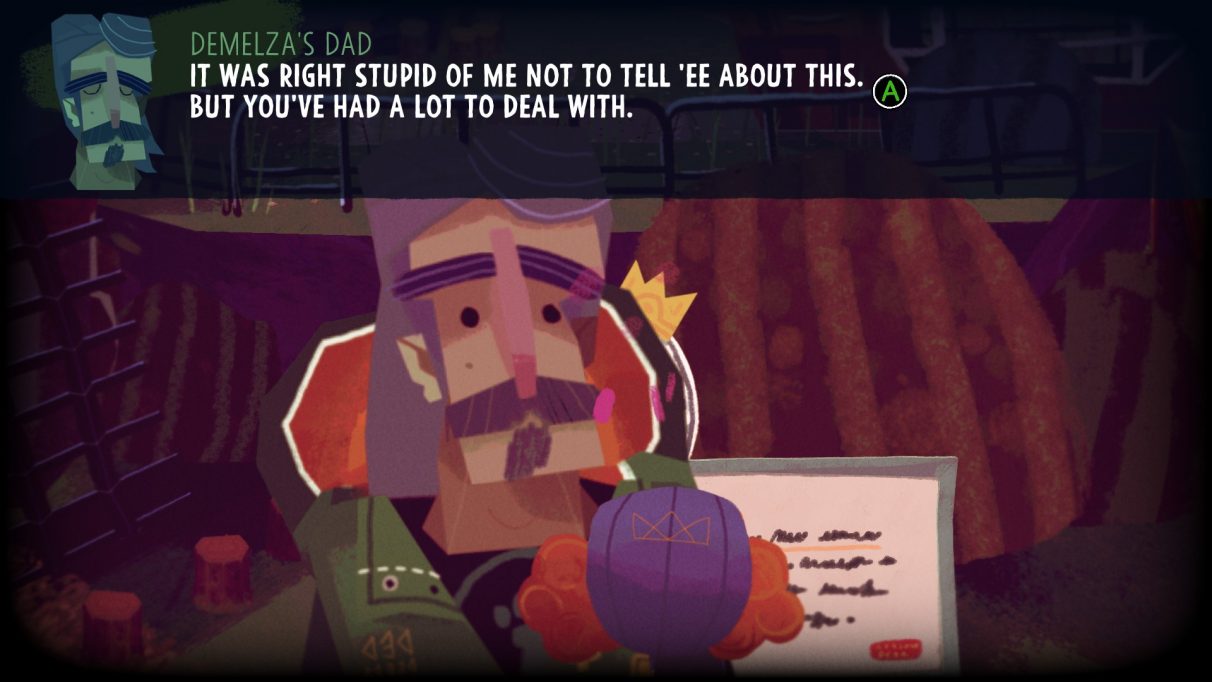 Stripped of its style and story and personality it would be entirely unremarkable, but the talent and joy and sheer heart that have gone into it make it so absolutely lovely that even after my brief time with it, I cannot recommend it highly enough.