Overwhelming though Steam's catalogue may be, it can be a hell of a tool for testing your assumptions. I pitch this to nobody in particular: a free week of everything on Steam. Not just one or two games, but the whole lot, free to everyone. Play something you'd normally hate, I say. See also: food, music, relationships.

Someone has built several towns, power plants, farms, and mines all over the place, but barely any infrastructure. If only some unseen guiding force was watching, possibly in isometric.

So yes, it's a transport tycoon affair, and a promising one too. You and some computer brains are competing to build up a region by connecting and investing in its industries with various modes of transport. Truck food to the village, ship oil to the power plant, lay a rail tunnel through that hill to get those industrial tools to the hammering club. I don't know how manufacture works.

It's in respectable shape. The UI tends to miss clicks, but the controls are adequate for this fairly early stage, and the threadbare tutorial wasn't strictly necessary. A bit of poking about helped me make sense of things quickly. The raw satisfaction of introducing supply to demand, and observing your little trucks and boats as they pootle about is a timeless one, and Transports's bright, clear aesthetic and unobtrusively cheerful jazzy music look set to carry it a long way. It also seems a tad more cynical (realistic?) than its peers, as there are longer term options to bribe towns and sabotage rivals. Could be an interesting one, this.

The Gods of smuggery invite my most obscure Amiga reference yet. Super Slime Arena is, for the twelve people who played it, much like Blob Kombat with a side of Super Smash Brothers: Players control a wee blob, each bouncing merrily around a single screen 2D arena trying to squish the others. Each slime has a different attack, and several dozen can play at once, potentially leading to a whole screen full of unpredictable putty madness. If you have a measly 50 friends (I have 104, obv).

While each blob is simple, the 'choose your fighter' and especially tag team elements could stretch things tactically. King Blob's ground pound makes for a huge kill zone, but his size and sluggish jumps make him a good target. Some blobs fly or leap wildly, some call lightning attacks, fling traps, or fire adorable death beams. It's pretty, ridiculous, and hilarious even with just two or three, which sadly might be as good as it gets. I fear it won't have the staying power of more serious fighting games, especially if, as seems a real possibility, it meets the tragic empty fate of so many multiplayer titles. But if the sight of a squidgy, gelatinous battle royale doesn't make you smile, are you really alive?

You are a ghostie. Possibly evil, but definitely keen on bombs. Your task is to re-kill all the undead monsters in your path, then kill the Ghost King and take his place. Shuffle about on a turn-based grid, walk into enemies to hurt them, and place bombs to trap them or access more goodies. Levels are random, as are loot, special items, and shops, but they're all very small. It's not about exploration at all, and is more like a puzzle game than a typical dungeon slog.

Monsters move after you do, so will hit you if you approach them or get surrounded. Rather than charge in swinging whatever it is ghosts swing (I should note that you can unlock other characters - the bat is the best), you need to plan moves ahead to trick monsters into letting you get free shots in. Each type behaves differently - mushrooms teleport away after they're hit once, ghosties move twice, and some monsters do the usual expletive deleted thing of unavoidably killing you without warning, so go back and start all over again. You idiot, you big idiot, why didn't you use your psychic powers, idiot.

BUT it's really not the arbitrary, time-hostile roguesod I feared, and through the fog of my entirely correct hatred of the genre, I can see that it's rather splendid. The rules are simple, and the small scale coupled with the puzzle-y aspect lend an interesting, vaguely chess-like air. It's arguably more like Rogue or Nethack than most in that regard, but with all the fiddly parts trimmed off.

There. I did a roguelike. You can stop making them now.

I hated this at first. It was floaty and weird and frustrating and far too hard. Then I got a bit of a feel for it. Then I caught on to what I should be doing. Then I realised a clever trick that seems obvious now. Then I started to retrain my instincts. Then my reflexes caught up with my thoughts. Suddenly, this was the greatest game ever. All this happened within the space of about 15 minutes, after which I was utterly hooked.

Blast-off is exceedingly simple. You launch a ball that must climb ever upwards, presumably for reasons. This is done by guiding it over blue accelerator things stuck to the background, but mostly by shooting the endless robotic balls that randomly launch after you, and riding the resulting explosions. That's it.

It's bloody excellent. Oh, there are unlockable alternative weapons, utilities and emergency powers, received for shooting enough balls, reaching greater heights and speeds. There are boss fights and hazardous obstacles. These are all fine, and give the less score-interested something to aim for, but it's all about the rush. The closer enemies are when you blast them, the bigger your speed boost. It's a classic risk-reward source of tension usually seen in bullet hell shooters, but speed is so much more tempting than mere points. The demands of dodging, aiming, and timing (especially with the default weapon, which requires leading your shots) combined with the thrill of acceleration is pure videogames.

Robots sneaking into the top five again. Those wily metal dastards. Vesta might be safer than some of the more outlandish releases this week, but great production values go a long way. A mildly taxing puzzle game with a lightweight action dimension, it puts you in the comfortable shoes of an engineer in an automated factory/processing plant/everything machine. The robots have mostly gone haywire, and you need to escape with the help of your (again, non-wacky. Could game writers be learning?) robot friend "Droid": a big sweet lunk who drags obstacles, stuns hostiles with rockets, and casually lobs Vesta over obstacles. She can then dash around hazards and purloin precious power from disused batteries and knackered robots. This can be transferred to nodes that open doors, activate conveyor belts and the like, taking you closer to freedom.

The contrast is curiously reminiscent of Bioshock's Big Sisters and Little Daddies, but tonally and thematically, Vesta is vastly less dark. The mystery surrounding the installation and absence of other humans doesn't stand out particularly strongly one way or the other, but the puzzles fit on centre stage, and the presentation and controls are difficult to fault.

Pick of the week is Blast-off 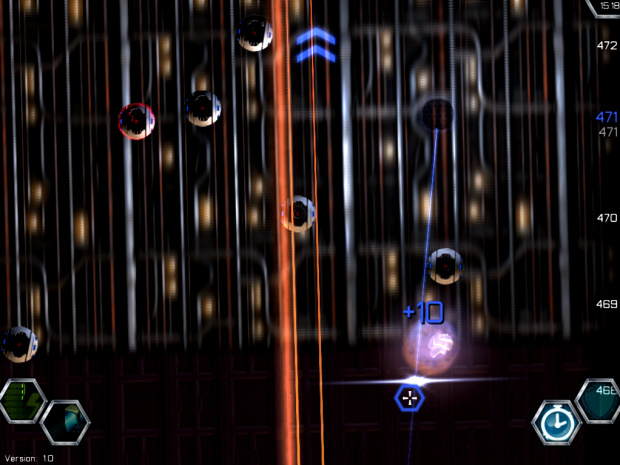 I am honestly a little surprised, but the fact is that I've never gone from hating a game to banging my head and howling with joy so fast. I had to force myself to stop going back to it (and even then, only stopped when it crashed) and didn't give a damn that I'm terrible. Even my highest score so far is probably laughable to anyone under the age of 20. But I probably won't have to fight mutants for the last tin of beans in the glowing ruins of Murdoch One, so it all evens out.