Infants. Infants everywhere. Ooh, look at me, I'm like a human but smaller and I'm allowed to scream and climb on stuff if I want to, oooh. End of term holidays are when you're supposed to be indoors playing games, not studying or going outside like some sort of peon. Bah. Wake me up when they're all back in school juggling cats or bouncer baiting, or whatever this week's Fear The Yoof thing is.

Why, I bet they don't even know what Unknown Pleasures is named after.

Pointing out what used to be grass this week: naive snipers, murine nomads, and a little blobby blob that boings.

Gambol is cuter than all the repulsively samey cutesy platformers that come out every week. It's cute in the way that chicken tikka is spicy. In the way that a good cup of tea is almost, but not quite painful.

I don't know, maybe it's all in my head. But the simplicity of its bouncey, faintly squishy movement is so joyful, and even the blurb on its store page is... sincere. Gambol is sincere. There's something disarming about that. Anyway, you're a blob who must get to the exit by up-to-triple jumping off floors, walls, and ceilings alike, and your jump counter resets the instant you touch any non-lethal surface. If you want an extra challenge you can also collect all the triangles on the level. Totally optional, but you'll try anyway.

It's simple but finely tuned, and finding such novelty and charm in such a basic subgenre is rare.

Recreating the NES colour palette often results in accurately hideous games. Levantera is an outlier that succeeds in looking the part aesthetically, not just chromatically. It also succeeds in approximating "retro" controls without feeling obstructive or gratuitous. Jumping and fighting are simple, even restrictive, but you're rewarded for considered, carefully timed attacks rather than punished simply for playing.

You're a shipwrecked captain gathering their scattered crew together to discover what's behind various spooky goings on. To do this you wander about hacking up hostile animals and pirates, and gathering cash and resources to help build a ship. Then you can take to the seas to explore and trade and adventure and all that traditional bleepy bloopy jazz. Little nuggets of plot and dialogue come along in well-paced doses, and while a mite tricky, it's usually carelessness that did me in, and it's rather forgiving too; Death is a mere pickpocket in this world. 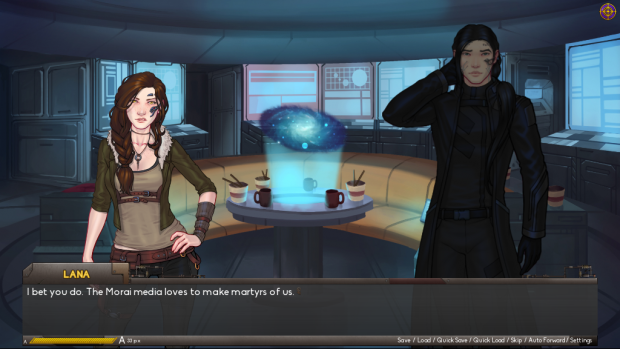 It's another good visual novel! Yes there's some drivel out there but contrary to expectations, interactive fiction is definitely the genre that keeps giving in 2018.

This one comes out fighting, with great artwork and well framed stills to break up the usual static backgrounds. These backgrounds are mostly spaceship or station interiors, as your character, Lana Brice, is a doubly well-drawn space scavenger inadvertantly on the run after getting her hands on a Mystery Plot Thing. You get to colour in some of her lines, with frequent dialogue options ranging from flippant to cold, and Telltale-esque text noting the reaction of NPCs, who so far refuse to conform to any obviously good/evil binaries.

It's unclear so far how influential either of these are, but that's fine because like Omen Exitio, Cardinal Cross is well written. Dialogue is succinct, and characters quickly express their personalities while also hinting at unseen dimensions. There are, if anything, too many extremely short sentences and (argh) ellipses, but that's certainly preferable to going too far the other way. Its sci fi terms link to a Codex, which you can dip into for details about the world. I never once had to. This is a sign of a talented fiction writer.

Final note comes from 4am Sin: "holy shit there's a character with vitiligo. I've literally never seen that in fiction. They uh... also wear black and white clothing and their name is Gemini. I am unsure how to take this."

I'm going to slam this one a bit, but let's be clear: it deserves a place here. Of Mice and Sand has you control a wee band of mice-people in Probably Future Earth. They set out from a stagnant desert settlement in a big ol' mobile tin can, prompting me to stretch this sentence into an excuse to tell you all to read Mortal Engines.

You roll about the desert gathering scrap, directing your meeces to build rooms and turn said scrap into gear to develop your ship further, or sell to outposts. Outposts are the only safe place to stop, as parking in the wastes invites unstoppable Sandworms, while driving leads to ambushes.

Slam time: It's not really the wild adventure it appears. It sounds and looks absolutely brilliant. The concept hints at a more open world FTL with trading and building, but Of Mice and Sand is in fact almost entirely about organising chains of production to pay for food, fuel, and to keep the piles of crap from spilling out of your ship. It's really fun, but a particular kind of sedate fun that demands lots of micromanagenemt, planning, and even some grind as you roll back and forth a known area saving up enough parts to buy access to a new place.

However, it's unfair to criticise a game for what it's not, rather than what it is. Of Mice and Sand is unique, imaginative, and very well presented (aside from the very poorly laid out workshop menu). And! It's not an effing roguelike. You can even have more than one saved game! Man, imagine if we had, say, about 25 years' worth of games where that was standard. What a barmy notion.

I could probably write a decent guide to how most interactive fiction games unecessarily screw up. Even better, I could use a pile of examples like Long Gone Days to demonstrate the right way to do it. Even if it's really more of an adventure RPG. Did you see that? I suggested writers look beyond their noses for ideas. Proper bedlam in here this week.

The leading strength is the narrative, which gets straight to the point. Instead of waxing lyrical, or wasting our time narrating an acre of backstory for a character we don't yet care about, this one gives you the hook with a briefly narrated, flash forward introduction. You're Rourke, a sniper for the Core, a secret underground nation/army trained from childhood to protect the world, keep the peace, and separate your socks into matching pairs like a massive, sad dork.

Which of course is a bit sinister and raises troubling questions to us, but not (yet) to our Mini Morlock friend. You direct Rourke as he leaves the Core for the first time, discovers terrible truths, and has to go on the run and, I wager, investigate and expose a monstrous conspiracy with the aid of a resistance movement and a bit where he stands on a rooftop going "No!" for whatever reason.

I'm being mean. The writing doesn't insult your intelligence, as much of this is foreshadowed from the opening lines, and Rourke himself is a quick study, so there's none of the impatience that comes with being shackled to a dimtagonist.

There's turn based fighting, adventure game looting, and a little sniping. All are absolutely fine, and the parts come together comfortably, neither tacked on or underused. The artwork is bright and attractive, and the understated sound and animations give it more heft than I expected. After well over an hour I'm still enjoying myself and curious about what's coming, which is all you can really ask for.

Pick of the Week: Oooh, this really is a tricky one, but I slightly favour Cardinal Cross. 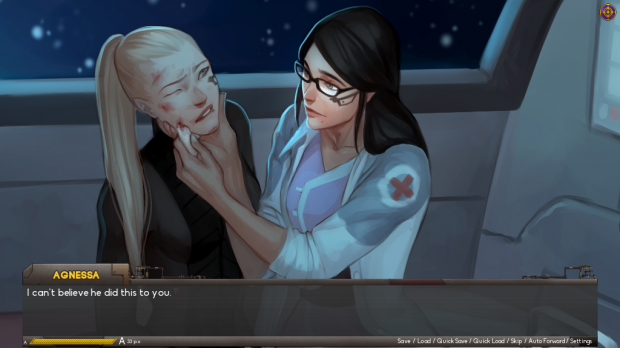 Almost a three way tie there with Of Mice and Sand, and Long Gone Days. But its space adventure setting is a touch more exciting than the more niche appeal of the others, and its promise of grown up interpersonal drama is alluring.