The office is eerily empty tonight, as RPS has vanquished another foe, and been locked out in turn by my guerrilla forces. I am alone in the building. There is only me, Candide the rainbow llama, and the endless invisible stream of code I must consume to sustain my terrible power.

It is time, my friends, for Unknown Pleasures, our regular delivery of the best lesser-known games on Steam, direct to your eyeballs, or possibly your earcubes. Installing malware on every PC I find left on overnight this week: island escapes, imperial collapses, and forbidden studies.

This is an odd game that does very little to explain itself, and yet makes a lot of sense. It's a management game crossed with interactive fiction, with the fat of both genres ruthlessly trimmed off. You're the new manager of an unremarkable team, Calchester, in what I took to be the 1960s but that's just its styling. It's all over the place chronologically, with a lightly jazzy, 1940s fashioned soundtrack, mega-corrupt characters in dramatic outfits encouraging players to slack it in the pub, evoking the 60s or 70s, and the big press conferences and references to social media you'd expect today.

This odd blend detaches it from anything too real, even as it introduces wealthy Russian gangsters, shady match fixers, and the faintly menacing presence of THIEFA. And woven into all that is a surreal, minimalist language and a mysticism that replaces the acres of boring stats you normally get with degrees of Karma and "Kaos".

You play one match per week. Before it starts, you pick one training option, and up to five one-off cards to play during the match. Card haters need not fear - they're really just a shorthand for instructions you shout from the sidelines, hoping the team will listen. "Keep possession" is a dull but useful one, but there are more outlandish ones like offside traps, aggressive formations, or riling up the crowd just to see what happens. But most of the match is a case of playing it safe and waiting for an opportunity, or taking a risk at the cost of (temporary) exhaustion.

It's a simple system that really pares everything down to the point where I punched the air with every goal, even though none of my players even have names. I was proud of my lads, whoever they were. I didn't know what would happen if I turned down the shady feller's offer to hire escorts for my team, but I suspected, and that was enough to make it an interesting decision.

I like this a lot. We need more sport games with this kind of humour and accessibility.

The wrong arm of the law extends once more to point threateningly at gangsters, smugglers, and possibly a chef who walked past at the wrong moment. It's a top-down tactical shooter that leans firstly towards the non-lethal ethos of the SWAT series, then leans the other way towards the more deadly, militarised attitude of Doorkickers, and finally changes its mind and goes directly between them instead.

Your job is to sneak, fight, and yell your way through 18 story missions, chronicling the aggressive investigation and prosecution of a criminal conspiracy with your friend and partner. I don't get the impression it will come down hard on American policing nor particularly cheerlead it, but the bulk of my time was spent in missions anyway. They're hard. This is a punishing game in which one or two shots will kill, and you're penalised for shooting anyone who isn't a threat to you, like a civilian.

Ideally you yell at them and they give up. Failing that, you're encouraged to fire a warning shot close to them (a controversial practice that some police forces forbid), or if possible give them a solid melee whack before arresting them and confiscating their gun. Unlike SWAT though, it's likely that you'll shoot a couple down every time. It's tense and fast, almost to a Hotline Miami degree, but fortunately it has the requisite instant restart button. Options are a tiny bit on the limited side, but the simplicity works as a strength.

Your AI mate is a bit on the slow side at times, though. It'd be nice if he automatically hoovered up guns and arrested people instead of having to be told for each one. And if he hadn't screwed up my near perfect run by gunning down a civilian who stood behind his target, the div.

Survival! It's the milk protein of the decade*. Die Young is something of a reinterpretation of the concept, however, and it's an interesting one. You're a young woman stranded on a large island somewhere in the Mediterranean, except your goal isn't to hoard resources and live a second life here. So instead of bashing sticks together until you're somehow building a helicopter, you just need to get the hell off the island, before whatever attacked and dumped you here comes back.

That does, of course, mean foraging and crafting. But it's sensible stuff so far, like a makeshift knife, bandages, and herbal gack for wounds. And there's a real impetus for exploring too, since the island is such a mystery. You're kind of a vastly less-hateful Whatshisface from Far Cry 3, showing up with your rich kid friends but all getting kidnapped somehow. It's not clear what happened at all, and someone seems to be helping you. There are also other people on the island - I found one person in a locked basement who wasn't part of my group, and saw another feller walking around in the open, ranting and twitching enough to make me extremely wary. Is he one of the kidnappers? Is he another victim whose fate will be mine if I don't get out? Is there something supernatural going on or has he just been poisoned or something? I do not know. I like that.

It also looks absolutely fantastic - the draw distance is spectacular and the first person climbing animations are pretty solid. I like that the island is a very attractive, sunny location instead of the miserable hole a lot of games would have made it. The island's unknowns are actually compelling enough to care about, and the frustration of not knowing how to escape yet works great.

*It's in everything. Come on, keep up.

You're a clone and that's okay. The AI that woke you is vastly more intelligent than all humans and would definitely kick you aside the second you stopped being up to the job. That's okay too. You're stuck on the edge of the ancient galactic empire, which has gone completely dark without explanation. Your ship is alone. That's... less okay. But it's okay.

Crying Suns has a great atmosphere. It's a grim prospect but presented with a near-military matter-of-factness, which is entirely appropriate for both your character (a revived clone of a talented space admiral) and your advisor/boss, the AI Kaliban, who like all their kind is extremely intelligent, well aware of it, and absolutely fine with working with humans anyway.

Your task is to explore the local landmarks, which should be humming with human and AI activity but have been long abandoned and often looted. Strange, hostile forces hunt your ship, and you'll have to piece together what happened and how to restore contact with the Empire - if it even still exists - by gathering data and technology as you go.

FTL is the obvious touchpoint, but its real-time battles are based around launching and directing ships rather than ferrying crewmen about. The latter pilot your attack wings or stay at home, contributing bonuses and skills as needed. It feels less frantic and a bit less extreme in its reliance on blind chance and foreknowledge of the game, although I should stress that this is as always an early impression. I'm very curious though, and Crying Suns' presentation does justice to its sold concept. Even if it is a bit rogue-y. Hmph.

Management games are ten a penny here in the Pleasuredome. My lackeys have to pick their grisly pieces out of the machinery every night, for most are not very good. Most are either impossibly esoteric and demanding, or have very little for the player to do. Spellcaster University is here because it's hit an impressive balance in this regard for a game whose access is still pretty early.

You run a school for magical dorks, building and adorning classrooms and utility rooms to cater to their needs, cramming the students full of knowledge until they graduate and go on to what is hopefully a not-useless career. Each student and teacher has character traits and a classic D&D style alignment that determines their potential in learning specific schools of magic, and the effect they'll have on their peers. So little Larry Bitter might learn alchemy faster than others, but he's lawful evil too, which happens to match the teacher's alignment so he'll be a quick study. But he's also an aggressive racist, so will be a total dick and bring everyone around him down.

Rooms are built by choosing cards (I know, I know) out of the three on offer every time you draw on a magical school. Students earn you more points in a school as they study its related classes, so there's something of a feedback loop where you'll naturally specialise. The element of luck is a weird one - you might not be able to build the things you want simply because those cards don't come up, but students can meet needs by going off-site, so you merely lose efficiency. And after a while, the local evil overlord will come and stomp everyone, forcing you to relocate and start again (you can also use diplomacy to help delay his inevitable assault, either propitiating him or having allies slow him down) in a new spot. It's an odd game and it has a long way to go, but I was having a great time and I'm really hoping it'll fulfill its potential.

Pick of the week: A very tough call this week. But I think Football Drama clinches it. 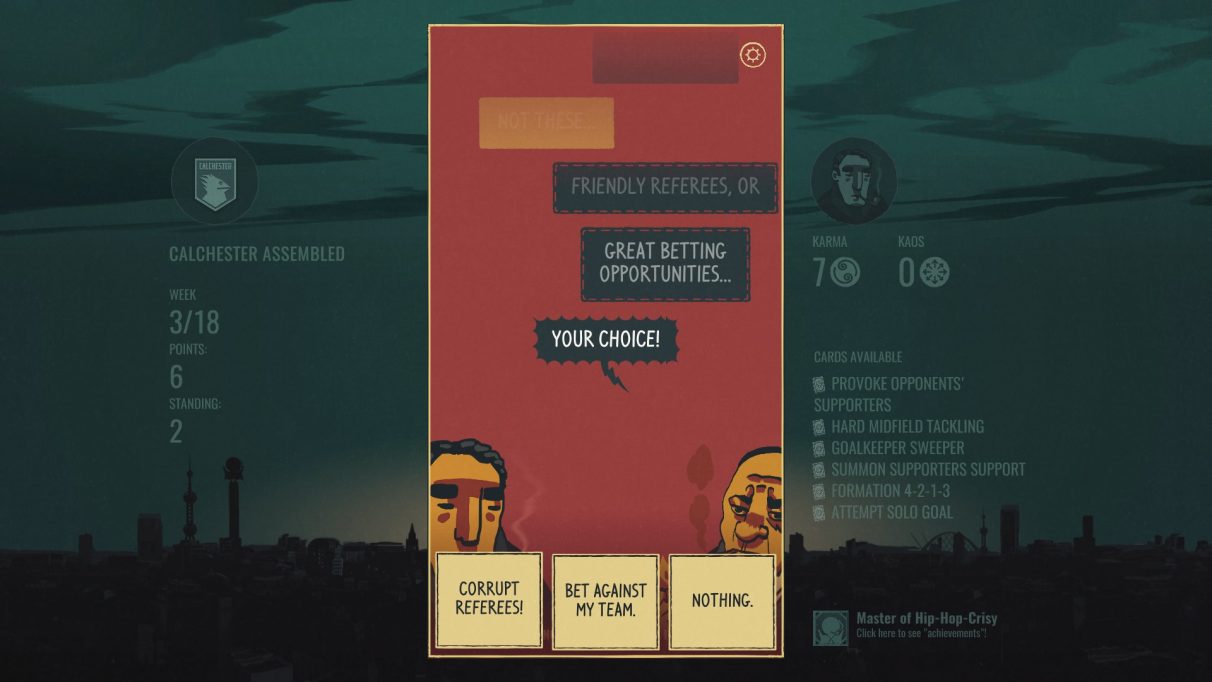 I've whinged before about how miserable football games got over most of the last 15 years, but I wasn't expecting a management game, of all things, to be the one that really broke out of the overwrought stat-obsessed, official sedative of the premier league mould. Football Drama is kinda what it says it is. It's football. It's drama. It's never clear what will happen but it's always clear what the possibilities are. Taking a risk might backfire. But refusing to chance it might cost you even more somewhere down the line. That's the game.