Like any decent human, I like a side-scrolling platformer. So when I spy one with a demo, I'm inclined to take a look - most of the time I say, "Huh, yup, that was another side-scrolling platform demo," and don't trouble you with the news. But do you know what - I'm rather taken with Unsung Warriors. Not least because of how ridiculously charmingly it works its current Kickstarter into the game.

It's fair to say that Unsung Warriors doesn't do anything strikingly original. Not, at least, in this demo level it's released. It's a fairly standard combat-led platformer, with a fairly generic hero, whacking extremely generic skellingtons with a very ordinary sword. But here's the thing: the standards, when done well, are a very good thing!

That's what Unsung demonstrates here. A clean, neat cartoon presentation, cute little animations, double-jump from the opening moments, and nice hefty choppy-choppy combat. You've a sword, a shield, and a bow. And if you gather and spend gold as you go, you can add to this some simple spells, upgrade your weapons in the shops, and... that's it! Enemies aren't one-hit wimps, but at the same time this isn't a Souls-me-do (cheering from the balconies), and you aren't faffing with energy bars to be allowed to hit things. All in single-player or co-op. It's pure and simple, like me. 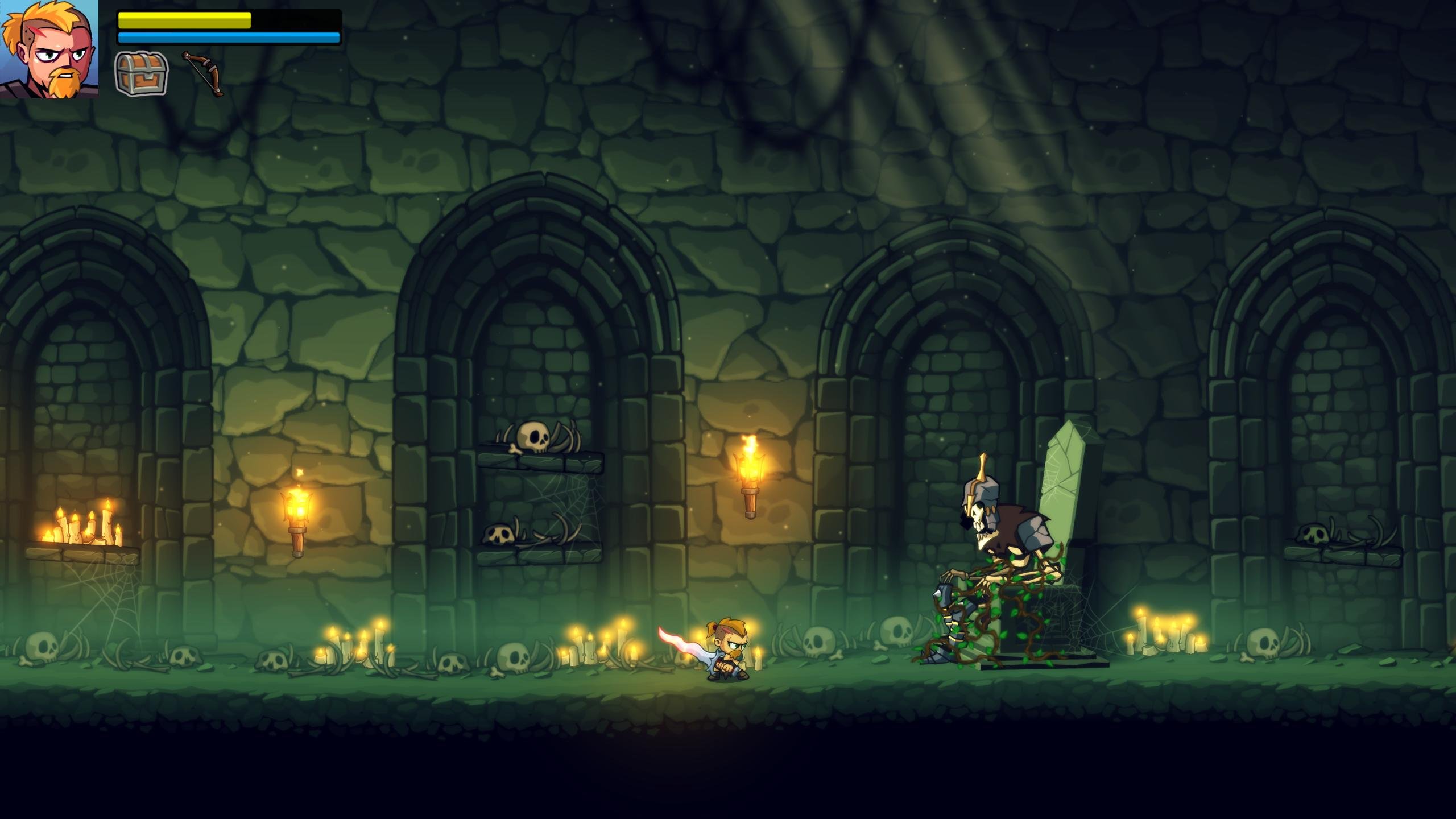 I think that's another part of the appeal, on top of the basics done right. This isn't trying to be a "twist". I loves me some platforms-with-a-twist. Give me your gimmicks, armfuls of gimmicks. But what a rare pleasure to just have none at all! Just some old-fashioned hand-crafted (as in, not procedurally generated) dungeons to clear out, in the good oooooold-fashioned waaaaaaaay.

Get this: it's not even a rogue-lite! There are save points in the levels! You can fail! I barely even knew what to do with myself. 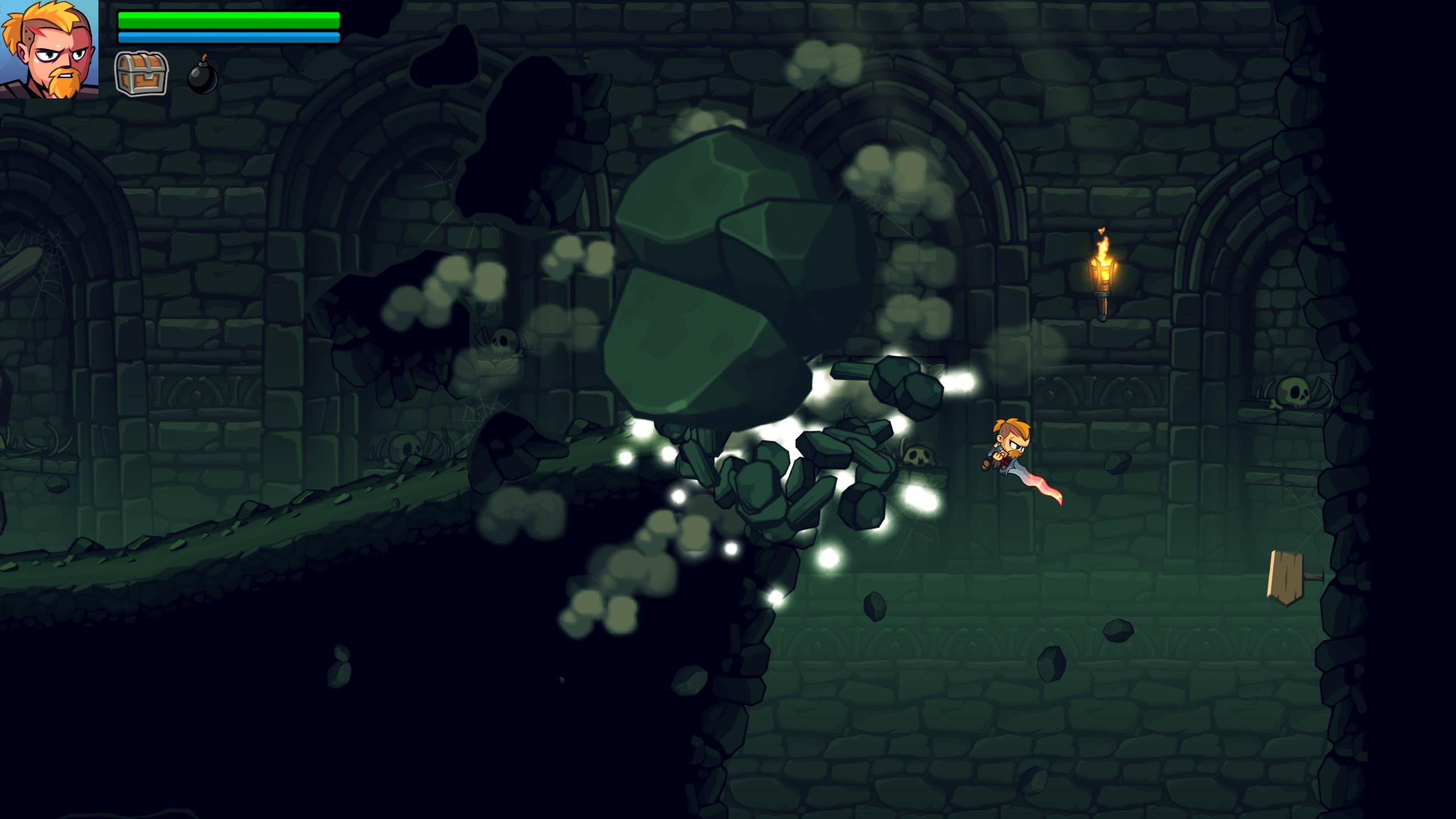 I was still a bit hesitant to write about it. Without that "hook", would you care? Or would you say, "But John, look how many good platformers I've got sat on GOG and Steam that I've still not gotten around to playing!" And then I played it a second time.

Ooh, gosh. You know when you're playing through something again, whether because you want to or the game's making you? And everyone barks the same barks at you, tells you the same information, and you have to impatiently click through it to get on? Like I always wish would happen, Unsung Warriors notices! Go back through the available dungeon again and the characters comment on it! Some even mock you for it. Even the boss at the end has a go! Such a tiny detail, but to deliver it, even in a demo, makes such a big difference.

Also there are a bunch of hidden little extras in there. There's a room that can only be discovered on a second play through, that has the names of everyone who's donated to their Kickstarter so far chiseled into the walls. There's even a dude in there chiseling them. He's on a high ladder, and I thought to myself, "It'd be funny if they'd let me smash his ladder," while assuming that of course they wouldn't. They would. It's cute and funny.

If you head to the left at the start of the demo, there's also a whole extra area dedicated to the Kickstarter, as perceived by the characters in-fiction. They speak of souls from another universe, where a legend speaks of tributes they might pay to see the rising of the Unsung Warriors to save them. Best of all, it's completely up to date, explaining, "We've received 5742 tributes so far," and represented by a tree growing from the rocky ground. 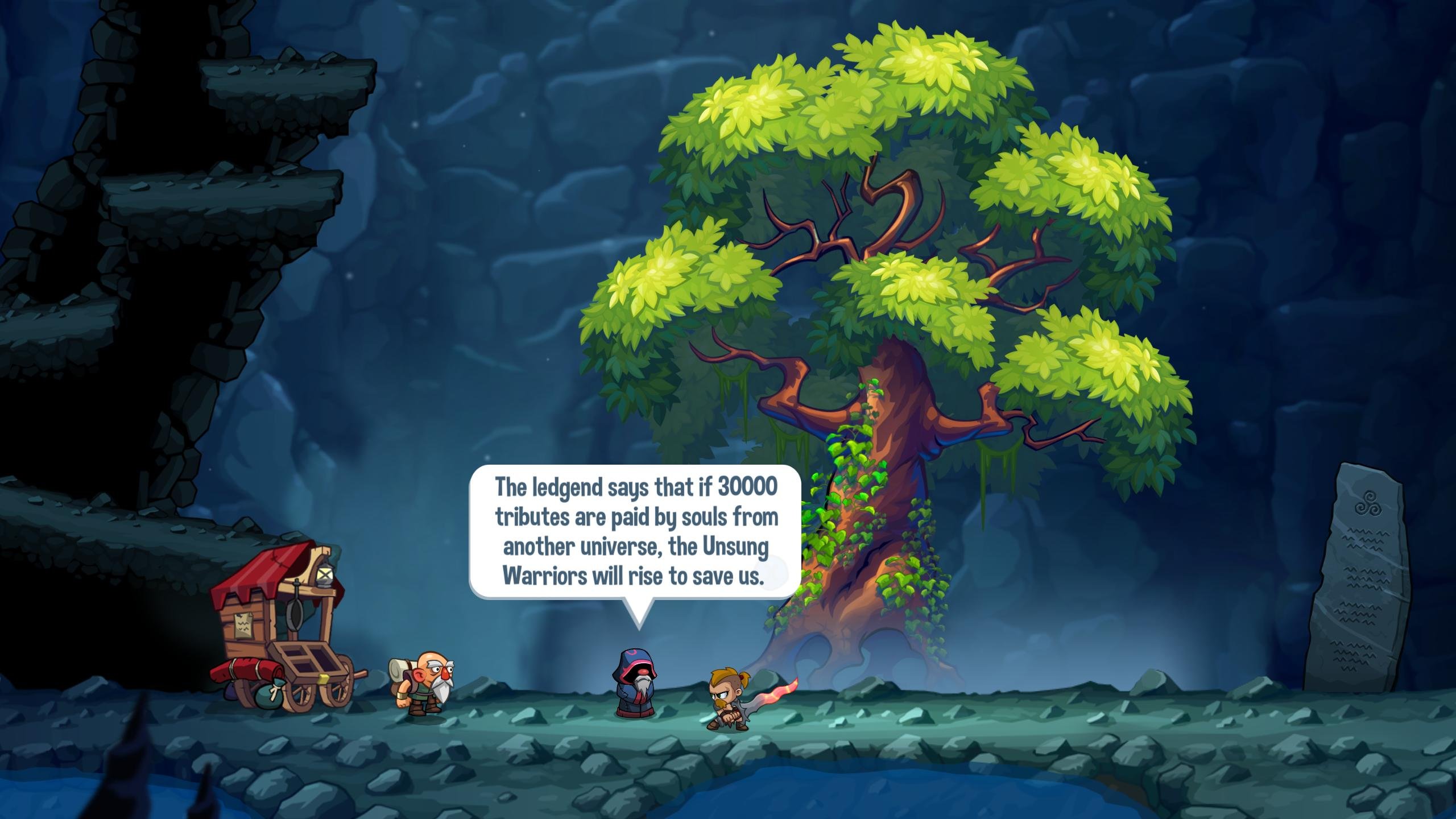 I know these are very minor details in some ways, but they're also indicative of an extra level of care, the sort of things that make a game that delivers the standards into something a bit more special. So, yes, Unsung Warriors isn't anything exceptional, it doesn't have that big twist or hook on which to hang an article. It's just a nice, fun little action platformer with a bunch of extra elements that made me smile.

You can get the demo for free from Itch, Steam and Game Jolt, and back the Kickstarter here.