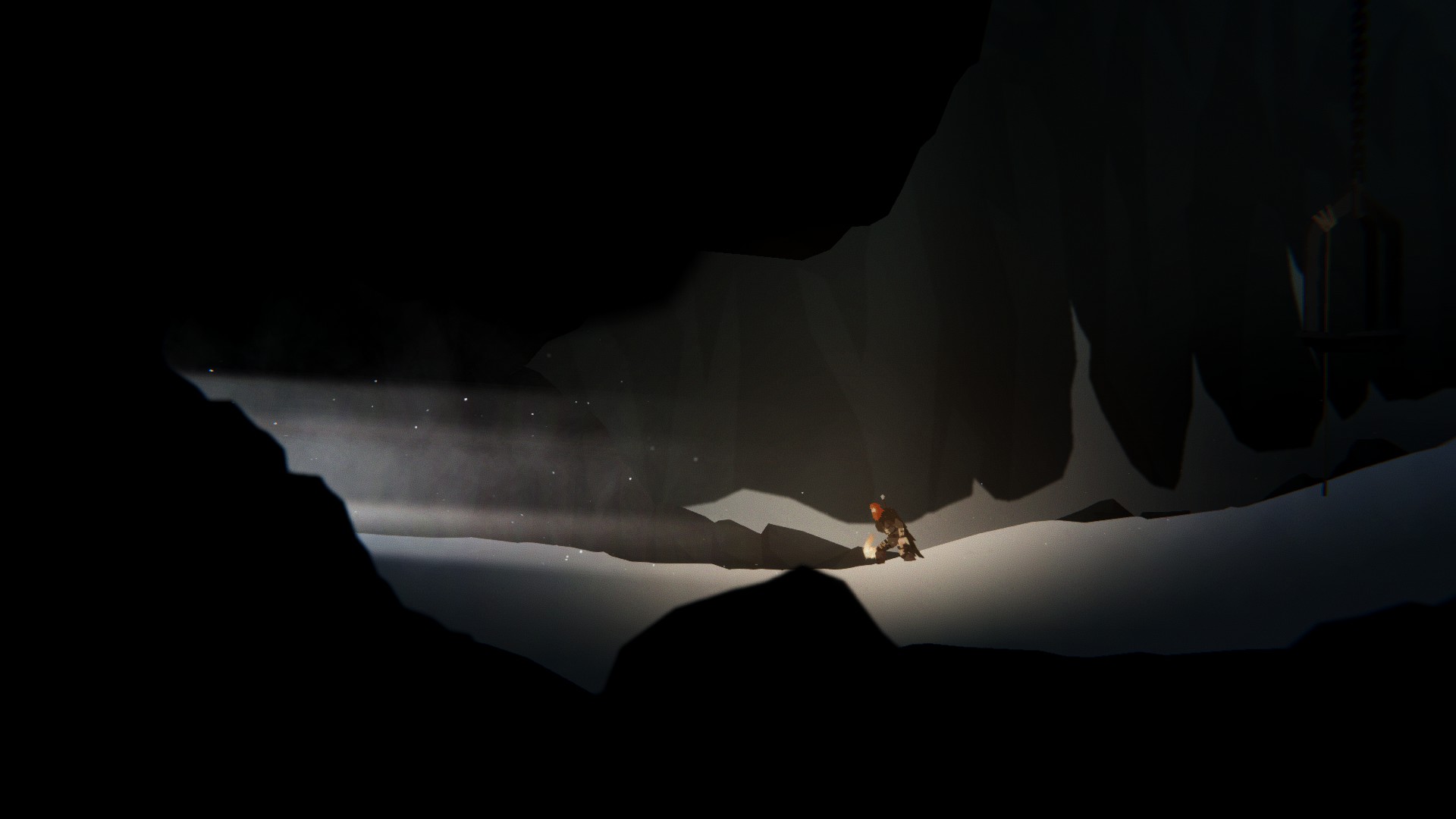 Unto The End review
A unique, demanding 2D sword fighting game that frustrates as much as it impresses.

Unto The End is a 2D sword fighting game about a little beardy man trying to find his way back home after getting lost hunting a deer. You'll guide him through gloomy, cramped caves, climbing and exploring and gathering scraps of leather, bone, and healing herbs. And you'll fight. Lord, you'll fight.

It's very much a game about sword fights, but rather than a hack and slash where you cut down monsters by the dozen, 2 Ton Studios emphasise that Unto The End is about fewer, harder fights. Fights that are deliberate and careful, and reward observation and a cool head rather than sheer aggression or strength. It's a strong concept, gorgeously realised, with some great ideas and a lot of personality.

I hate it, though.

I'm sorry. I really am. There's no joy in slating a game, especially one made by a small team who clearly put a lot of thought and care in. Unto The End has frustrated me into surrender, and I have nothing left but to report on why, and on what it does well, because for all my complaints, I certainly can't say it's a bad game. I'm confident some of you will love it, in fact.

It is fantastically animated, for a start. Simply walking around it is a visual delight, be it the extensive, gloomy caves or the icy surface you occasionally break back onto. Those contrasts are particularly effective. As the dim, often pitch black tunnels you wander through are penetrated by a shaft of sunlight and swirling snow, it's near impossible not to feel exactly the relief your little beardman must. Your perspective is often partially obscured by columns of rock or narrow trees in the foreground in a simple but nonetheless excellent parallax technique. There's a bit several hours in where a deer is visible in the distant background, echoing the deer chase that brought you here. A small herd dashes past as they flee from something you will surely have to fight, which in turn snarls and slams its weapon down when it sees you. Not just in aggression but in a clearly territorial warning. 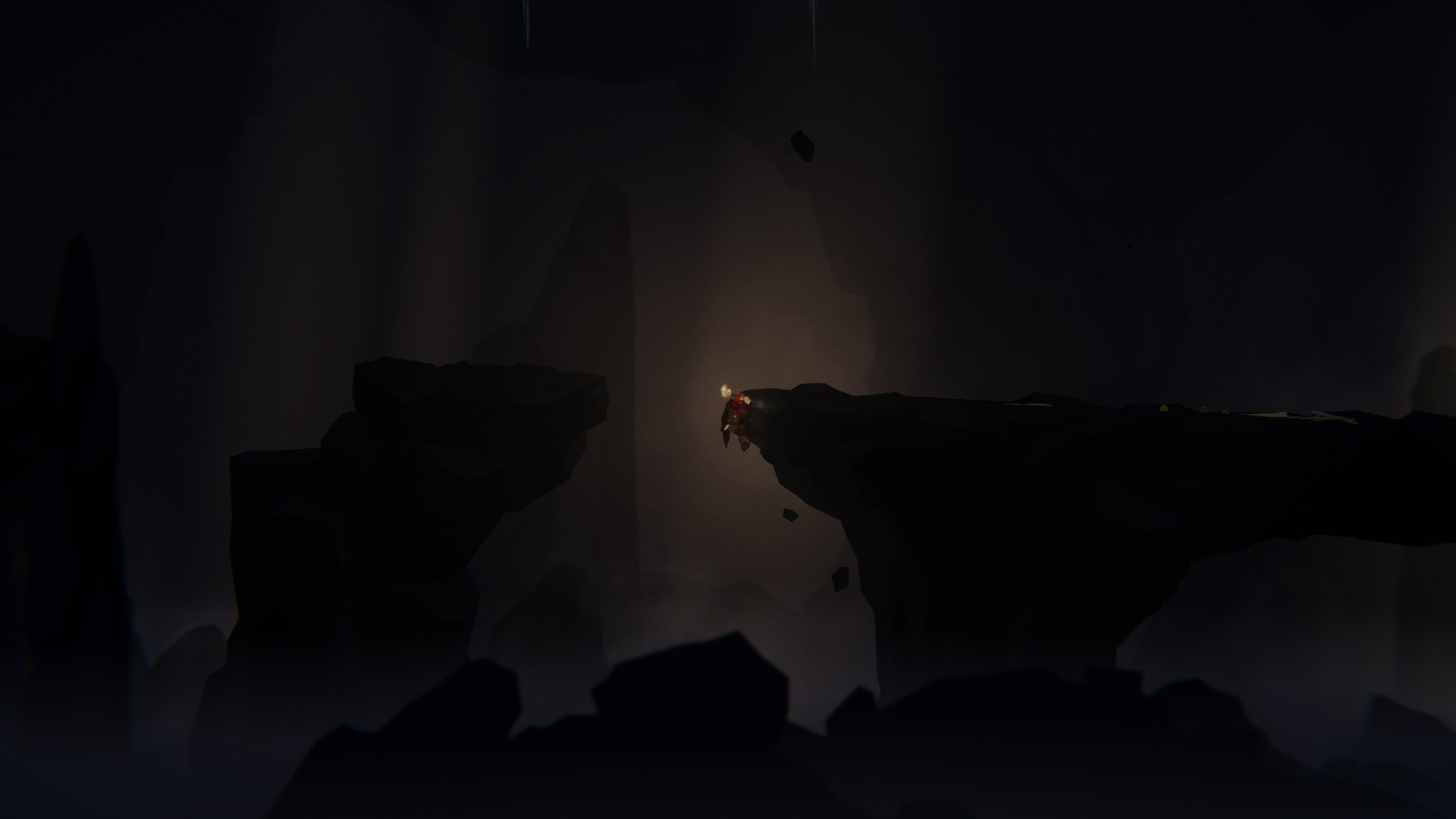 When you break the surface and find several dead bodies and a creature attacks, there's an intelligence and purpose to its movements, a pride in its prowess rather than the raw animal aggression from the cave dwellers you've seen before. This fight is a martial challenge, says the game without a single word. This is a warrior. Its eagerness contrasts with your character's movements, which always have an air of reluctance and exertion.

The sound, too, is terrific. The open spaces sound so. You can hear how cold the air is, and the faint sounds of life underground drive up the claustrophobia as much as the oppressive darkness. Unto (I have decided that his name is Unto. It just is, okay) grunts and sighs with discomfort. He never actively complains, but he's obviously not having a good time down here. I adored the expressive animations of Flashback as a kid, and Unto's climbing, fighting, rolling, and stoically suffering is its rare and worthy successor. 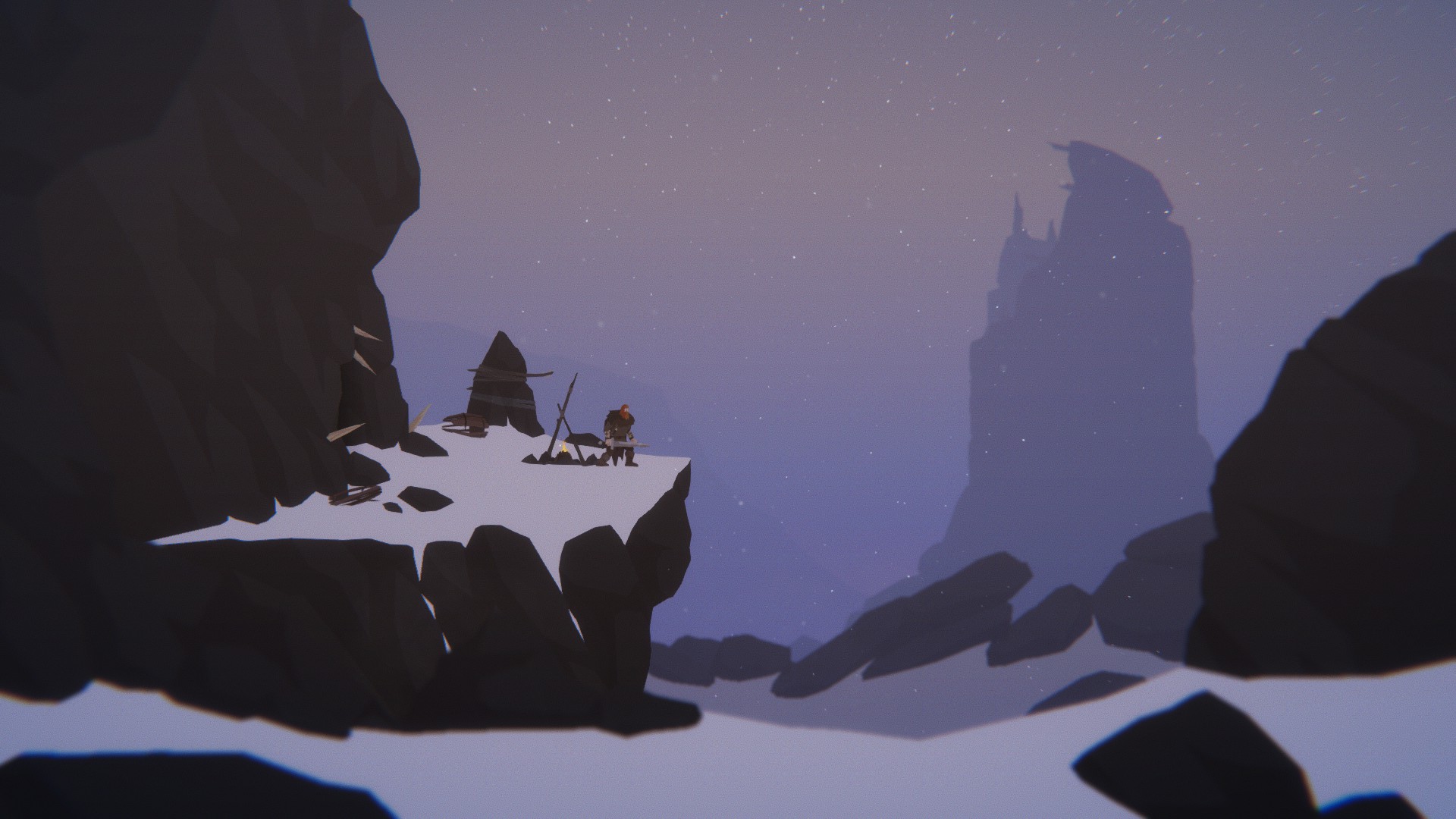 I think some people are going to love it. I found it constricting and frustrating. I can respect, in principle, a melee fighting game in which every encounter is serious and deadly. In practice, I quickly became tired of it. There's an option to practice sparring with your wife in a playable flashback any time you reach a (very rare) campfire, but fighting her feels too different to most of the actual fights. Recognising tells is key, as the core of its combat is blocking high or low, and then counter-attacking with the opposite while the enemy recovers. But she has different tells. More frustrating still is that you don't fight on even terms. If you block an attack and counter, the enemy will often simply hit you anyway, overriding your own hit and if not killing you, making it likely that you'll keel over from blood loss a few moments later.

Damage seems to be completely random. Sometimes a cave feller's spear will kill you instantly. At other times it'll knock you over and you'll assume you're dead, sigh and put down the controls, and then watch as it takes the crowd another four or five hits to kill you. In theory, it means you'll keep fighting no matter what, but in practice, I quickly learned not to bother keeping going if I took a hit or two, since I'd probably just bleed to death anyway. Do any of them keel over mid-fight? Of course not. 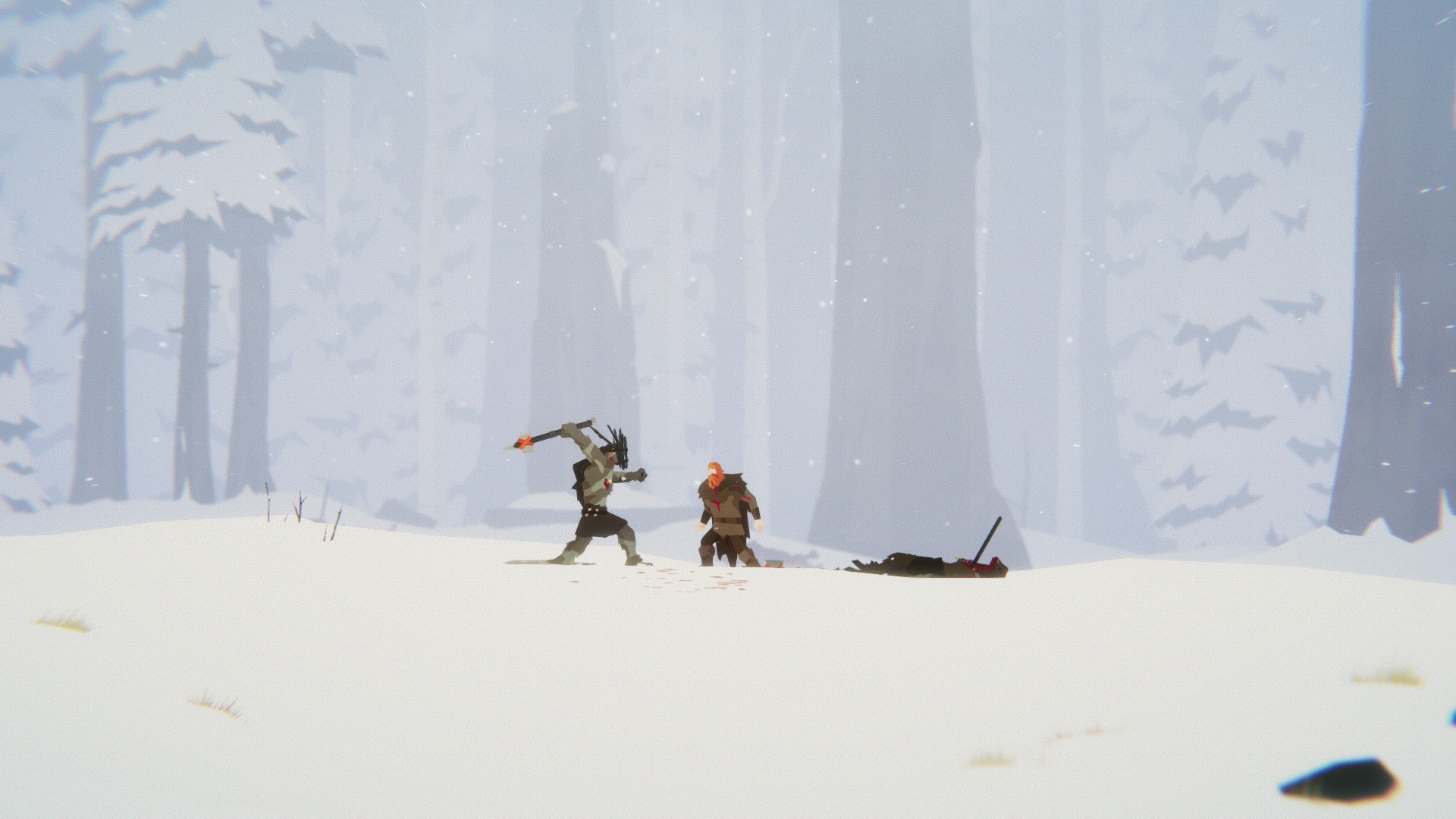 It doesn't help that the tiny graphics, and majority of the game spent with most of the screen in total darkness save for your torch, make the few pixels that are your health gauge (actually just bloodstains on your beard, which I admit is a cute touch) difficult to make out. And his breathing is so laboured that he sounds like he's dying half the time anyway. As the game's intro emphasises that you can run out of supplies, even using post-fight herbs to slow blood loss felt like risking a game over, and thus trudging through the whole game all over again thanks to its reliance on a single, checkpoint-only save.

The checkpoints, too, are plain irritating at times. A game with frequent death needs restarts/reloads to be as near instant as possible, but Unto The End slowly fades out, and then back in, putting a wait of five or six seconds between each attempt. It's a curse, because there are some excellent moments. One encounter, probably the one most players will remember best, involves a warrior lobbing up to three spears that you must duck before (or perhaps roll while) closing to melee. It's a great moment the first time. The first time.

Even using post-fight herbs to slow blood loss felt like risking a game over.

Unto has a habit of ignoring what you ask of him. It's not very frequent, but it's frequent enough to be frustrating. The enemies who can't effortlessly block your attacks are few, and rarely alone, while the rest can often decide that your attack is blockable even when they're flat on their back after you barged them to the floor, instantly flicking to an upright position with a spear raised. I can't even switch my block from high to low that fast.

Rolled a second too soon? That guy can instantly spin 180 degrees in one frame of his attack wind up. Your man Unto, meanwhile, will throw his dagger in the wrong direction if you try to throw too soon after rolling. He will automatically turn to face enemies you're trying to move away from, and awkwardly shuffle when you want to quickly retreat.

I've yet to finish a single feint animation, let alone land a follow up. Whenever I try one, instead of trying to block, enemies just attack as usual instead, and I always come off worse. The barge attack buys space, but it's a toss-up whether your follow up attack will land. The throwing dagger is neat, but why would I only carry one at a time, and why when I accidentally lean on the 'dagger' button while trying a shoulder charge, does Unto take two full seconds to realise he's already thrown it, and elaborately shrug instead of just moving on? It's a good animation, but right now we are being stabbed. Priorities, lad. 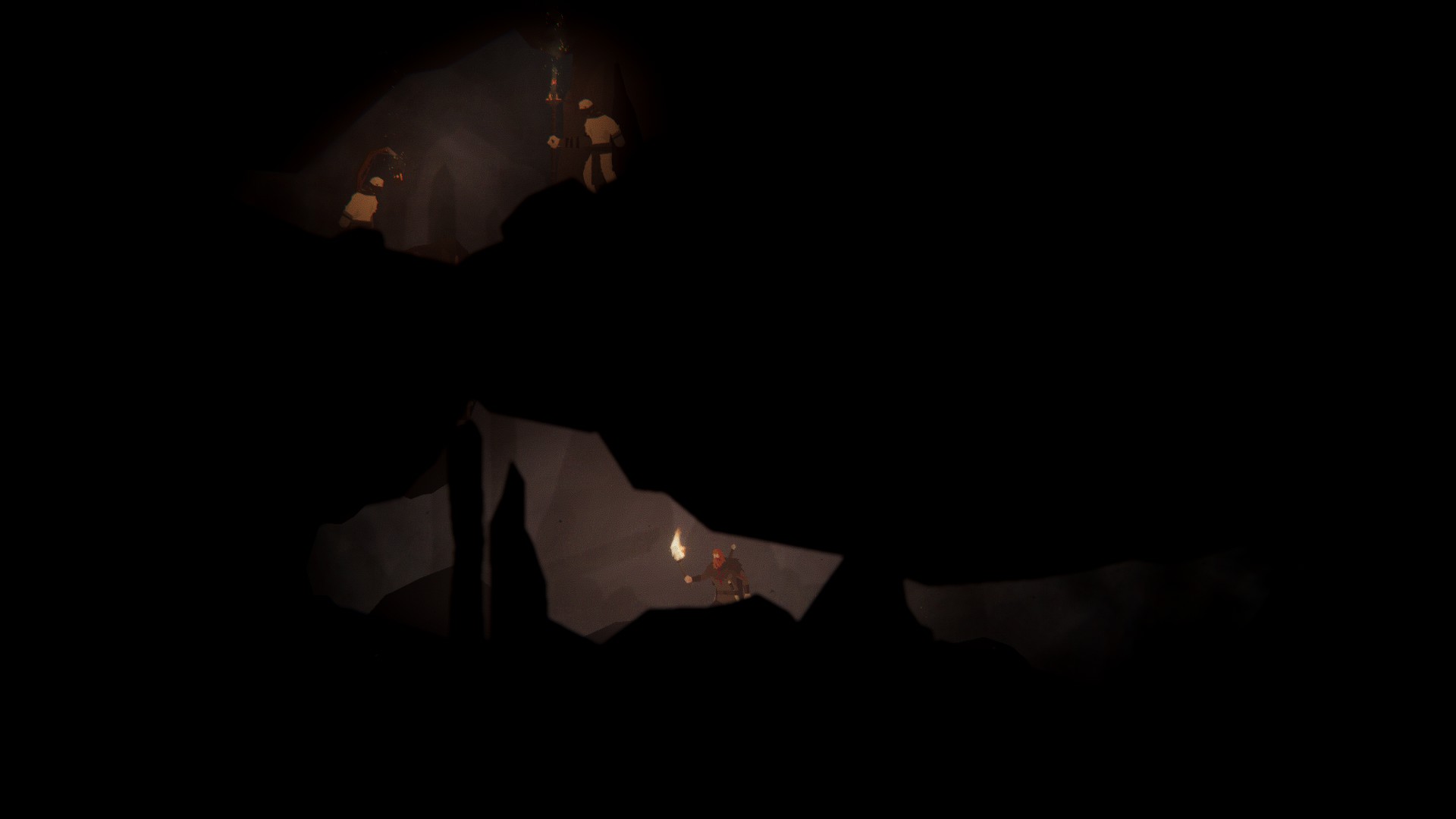 I just don't feel in control. Each fight feels like my only real option is to repeatedly block until my opponent decides I'm allowed to hit him now. I haven't mentioned the non-combat parts either, in which you explore the caves looking for supplies to patch up and improve your armour at campfires. There are a few environmental puzzles, which would be fine if they didn't sometimes boil down to leaping off things until one of them doesn't kill you. The first note I made was "It's fucking Rick Dangerous isn't it", which isn't entirely fair, but it's also not exactly a lie.

There are moments where you can avoid a fight, which is great. They're scarce too, which, despite my moaning about the combat, I respect, and think is a better decision than making everything avoidable. But these moments feel similarly flailing. Offering an injured person herbs is obvious enough, but at one point I tried to show an extremely threatening, but hesitant monster, a lock of hair, and Unto knelt down and died. Just straight up died on the spot. Did I choose the wrong item? Does this particular monster hate my wife? Either way, getting back there again meant trudging through the same corridors again. 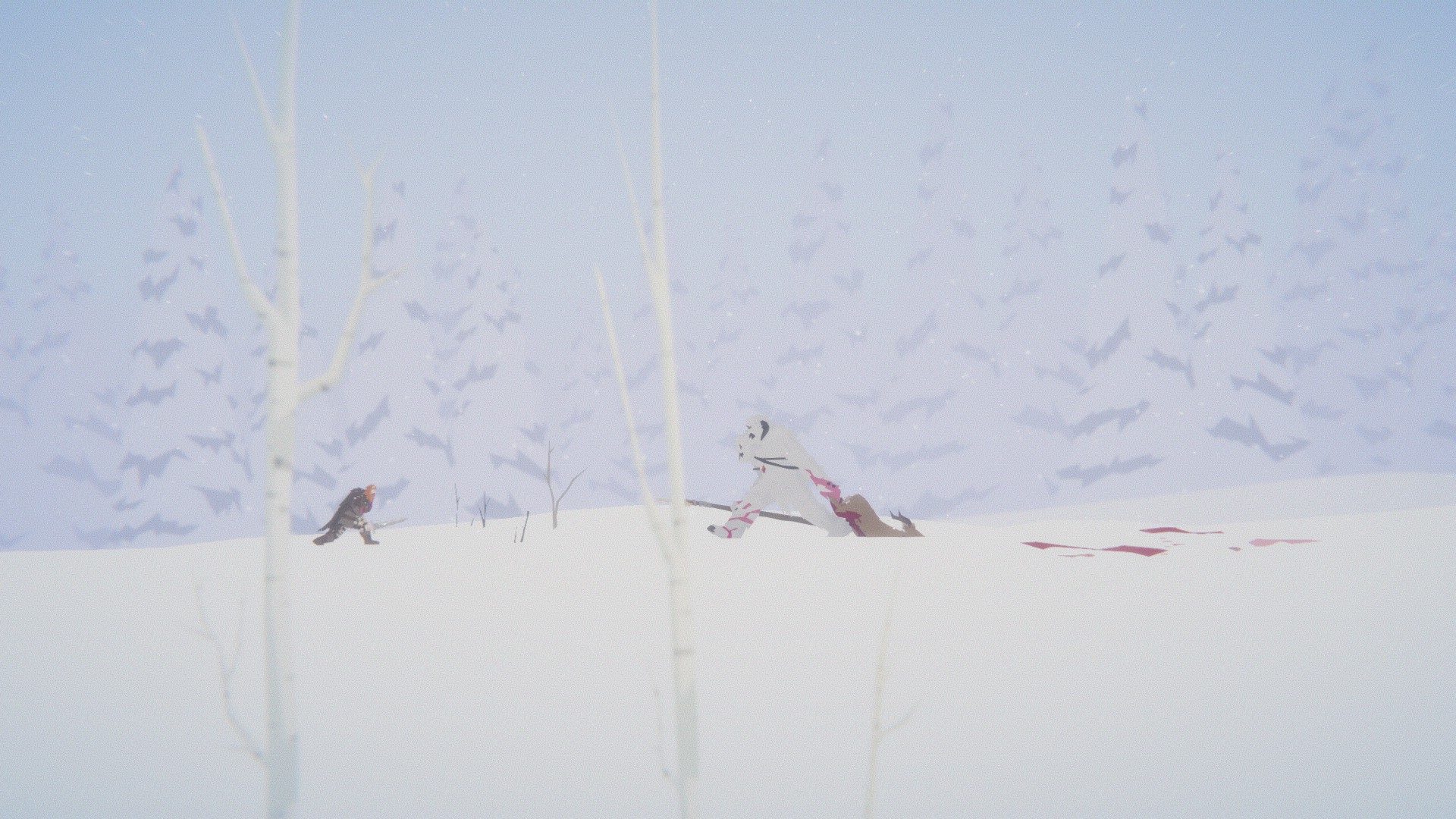 I'd say "I'm sorry, Unto", but I'm really not sorry because I hate this sluggish, clumsy little arsehole and I wish he'd stayed dead the first time. Some of you will like him (and it's worth giving it a go via Game Pass to see if you do). But that's your problem now.