Alice Bee: Good afternoon, esteemed colleagues. We were all locked, at one time or another, in the RPS EGX dungeon this weekend. Given that it's a veritable bonanza of video games, both large and small, we should discuss the bestest games we saw over the weekend. I'm sure it will be entertaining and useful for our readers!

Who wants to offer the first game up upon our terrible altar?

Dave: I will gladly offer up Streets Of Rage 4 [official site]. As a lad who was practically raised by Streets Of Rage 2, I was a little nervous about a new team and a new take on SOR, after all the years lying dormant. But I the dragon has woken up and it turns out it’s basically the same old beast but with shiny visuals and juggle combos.

Alice Bee: I have no history with SOR, sadly. Were you not hoping for a bit more innovation, or are you happy enough with Streets Of Rage: RAGERER?

Dave: The juggle combos made it feel a little more RAGERER, not least because my brother and I were playing tennis with the level boss as a ball. There were a few other minor things too, like new character Cherry being able to leap from enemy to enemy to smack them in the head. The biggest departure from old school SOR is in how this one looks. The comic book style didn’t really pop in screenshots, but it made a far greater impression in person, seeing enemies flying through the air. It also seems like they've made an effort to make levels seem like entire neighbourhoods, rather than just two or three locations. 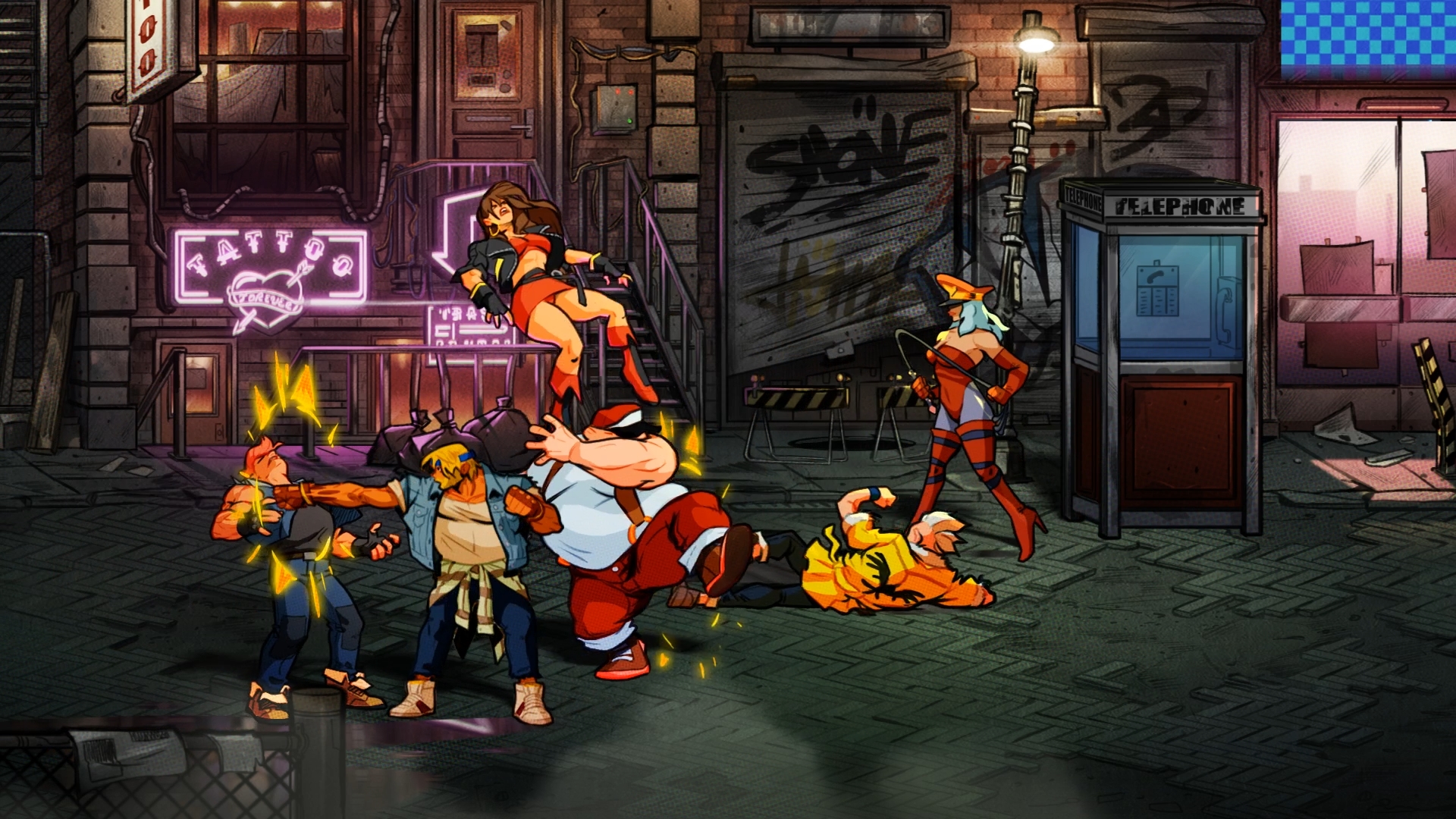 Katharine: I also have no history with SOR, so wasn't drawn to it, but I was very impressed with Tales From The Floating World by Meteor Pixel [Twitter]. The developer only had a short prototype on show as part of the UK Games Fund stand, but I loved its Japanese woodblock visuals. Made me feel like I was inside a Hokusai print, only instead of pretty waves and Mt Fuji landscapes, I was a samurai slicing up oni monsters. Definitely one to watch.

Sin: My favourite was, naturally, a visual novel. I have accepted my fate. Although if I’m being completely honest, it’s difficult to name one game. I played most of the Leftfield collection and some other indie games around its periphery, and while there was lots of good stuff, I’m struggling to single out one that really jumped out.

But yes, Across The Grooves [official site] was really intriguing and I regret that I didn’t play it for longer. It’s about a woman who receives a Vinyl LP from someone she (mutually) broke up with a few years back. That triggers a flashback of their breakup, after which she goes about her day and gradually realises that something in her past has changed. Also Skatebird [official site]. Oh no, I forgot Skatebird.

Alice Bee: I loitered a lot in the Leftfield Collection, and I saw Skatebird, but didn't get a chance to play it. Is it, per chance, what you'd expect from a game called Skatebird?

Sin: It is exactly what you’d expect. You’re a wee bird on a skateboard stuntin’ around and doing the slap lifts and twistos and, uh, radboard… look I don’t know skating words alright. But Skatebird was immediately engaging and I could feel myself getting better at it just by mucking around, not trying particularly hard. I chatted a bit with its animator, Alex Price, and that’s something he was keen to nail down -- interestingly he mentioned fighting games as an influence, where you can practice hard and get really great, or just mash it and gradually improve without stressing too much. That definitely came across.

Dave: I went back to Skatebird multiple times, because I found it strangely calming. But then again, budgies are a calming presence.

Alice Bee: That statement is pure madness, budgies are like the least calming bird type, after parakeets.

Sin: Did anyone figure out what the hell was going on in Epilogue Simulator [official site]?

Katharine: Do not speak of the nightmare that was Epilogue Simulator. That music will haunt me forever. I spent ages solving its weird blood cell puzzles, but they just kept coming. I meant to go back and try again when the demo had been reset, but alas, I ran out of time.

Dave: I tried everything I could to get it to do something, even pressing Alt and F4, but to no avail.

Sin: It appeared … maybe not broken but in some sort of intractable fail state. Sometimes people got it working, and you could walk around without the weird (deliberate) glitches obscuring everything. But even then it was bewildering.

Alice Bee: Whenever I went past it wasn't working, if I'm thinking of the right one. I think there was a note on it.

Katharine: Closed Hands [official site] was another strong contender in the Leftfield Collection. It tackled very serious subject matter and had a lot of strong writing, but I was most intrigued by its 'nosing through computers' sections where it felt like you were hunting for more information. Reminded me a lot of Orwell.

Alice Bee: Yeah, I really enjoyed Closed Hands, actually. If enjoyed is the right word? I believe it's by Dan Hett. His games often touch on said very serious subject matter, and he wrote an article for us that sort of goes into why a bit more.

Sin: It was good aye, although it was probably a mistake putting the harrowing text-based narrative next to the skateboarding game. Also one of the terrorist suspects was called “J Walker”. Called it.

Katharine: On the sillier side of EGX, one of my games of the show was Necronator: Dead Wrong [official site] by Toge Productions. It's fantastic, and a strong contender for our Can't Stop Playing feature, too, when it eventually enters early access next year. Described as a micro RTS, it's a more advanced version of the free Flash game you can play already, only here you use cards to summon hordes of the undead to take over the map. Imagine Bad North, but on rails. It's wonderfully addictive, and its super cute pixel art makes each battle a joy to watch.

Alice Bee: I also want to give an extremely corrupt shout out to Escape From Citytron [official site], by Alec Meer (RPS in peace). It's an endless runner where you play a legally distinct transforming robot that can become a motorbike or a jet plane, and are trying to escape from a city that is turning into a really big legally distinct transforming robot. Genuinely one of my favourite things I played at the show, partly because it had a really strong, clear purpose -- you are a robot, you are escaping, so do an escape.

Alec, in classic Alec style, told me all the things he didn't like about it and then gave me a sticker.

Dave:The fact you can fling yourself across the screen by boosting off a platform sold it for me. Speaking of flinging, Sin, is it about time we talked about Recoil [Twitter]? It's an arena shooter where you play as a gun. Shooting behind yourself launches you miles. That was a ton of fun.

Sin: It was drawing a lot of attention. Also we played it with two randos and one of them beat us both. Oops.

Dave: We failed you dear readers!

Sin: I did enjoy it but if I’d had more time I would have played more of Paradise Killer [official site] instead. A sort of VN detective game with 3D exploration in a bizarre setting. Oh god what have I become.

Katharine: Paradise Killer was fab. It's like Danganronpa meets Sherlock Holmes, with all the flair and style of a Suda51 game, and I want it right now please.

Dave: I watched Sin playing this and frankly I was confused by everything on screen. So instead, I'd like to next offer to the altar space sim Everspace 2 [official site]. I hated the first one, but the sequel has better controls and looks better. It's just better better. There’s also rhythm action game Aaero 2 [Twitter], but I’ve drunk too much of the proverbial Kool-Aid of the original to be unbiased about it. But I will say that the co-op was fab.

Sin: Aaaaaero 2 was great, I wouldn’t have thought it was as early a build as they said. I enjoyed shooting at Dave just to annoy him.

Dave: You did throw me off my rhythm a few times. 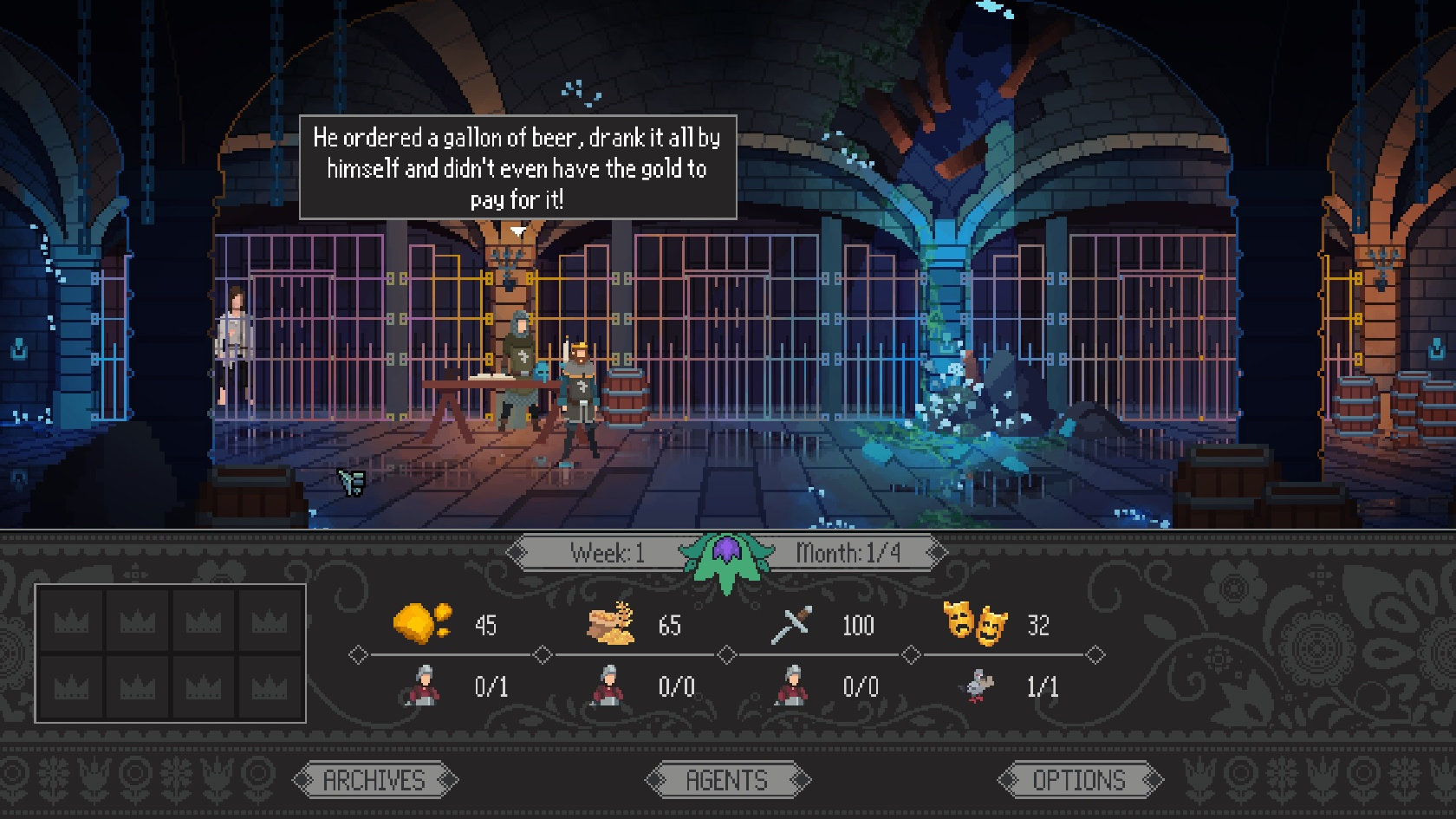 Katharine: I spent an inordinate amount of time playing Yes, Your Grace [official site] from Brave At Night, a kind of kingdom management RPG meets Game of Thrones simulator with lovely pixel art.

Alice Bee: I played a lot of Yes, Your Grace, on your recommendation, Katharine! I was both a terrible king and terrible father. I gave someone loads of food and gold so they could have a show-y off-y wedding, because I am a people pleaser, and my middle daughter (who was, like, eleven) went out and got pissed at it.

Katharine: This sounds strangely familiar to my playthrough, and I can't wait to make more terrible decisions when it comes out next year. I also loved loved loved 2D action adventure game Unto The End [official site] by 2Ton Studios as well. I died loads, but its gritty, meaty combat had a lovely sense of heft to it, and its sound design was super atmospheric as well. Your health meter is also determined by how much blood you've got on your beard, which is just genius. And, finally, I was pleased to see return showings from the lovely Eastward [official site] and Xenosis: Alien Infection [official site], which I played at Rezzed earlier in the year and enjoyed very much. More please!

Alice Bee: I'm going to bang my priestly gavel of mixed metaphors and put a stop to this now, because it's getting out of hand. There are too many games! We have sacrificed so many to the bestest gods today! The stones of our cursed worship circle are slick with their pixelated innards.

And the most bestest part is that, actually, we seem to like a lot of games that are early in development. It'll be interesting to see how they progress. We might get to sacrifice them all over again!

Dave: There’s so much blood...