If you're looking to build a team to stop people hacking your game, why not reach out to the people who are trying to hack your game? That's an idea Riot Games had with Valorant and League Of Legends, hiding a little recruitment message inside part of their anti-cheat system. If you're poking around in their gameguts, they might be interested in your skills.

It's an idea a fair few companies have used before in websites, software, and such: hiding messages likely to only be seen by people with skills or interests that might make them valuable to you. As Motherboard report, the Packman software Riot use in several games has been found to have a little message:

"Protected by packman, a Riot Games product. Developed with <3 by the Anti-Cheat team. We're always hiring talented individuals. If you've found this message, we implore you to take a look at our jobs page and see if anything catches your interest: https://www.riotgames.com/careers."

And Motherboard showed the message even has some ASCII art for that hacker/code cracker/slacker aesthetic: 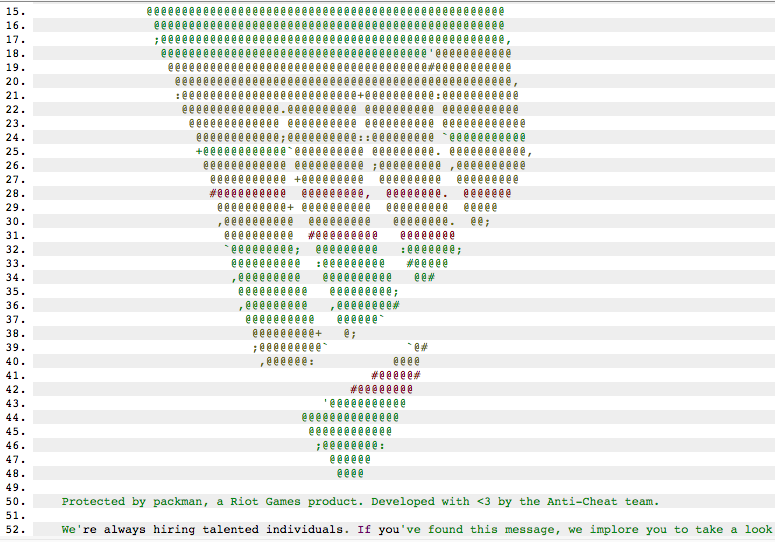 Riot have made a big show of fighting cheats in Valorant, with their their controversial anti-cheat 'Vanguard' hooking deep into your PC to police it. Despite this, wrong'uns are managing to make wallhacks and aimbots for it. Cheat vs. anti-cheat is an endless arms race (still being fought with lawsuits and software in far older games) but perhaps some folks might be interested in going legit.

Not as subtle as recruiting World War 2 codebreakers through the Telegraph's cryptic crossword, mind.