Valve are introducing a set of long overdue new features to Steam over the next month. The first of these updates gives developers a new tool called Steam Events and will be released to developers today. New updates and additions to the Steam Labs experiments launched in July are due to follow tomorrow, and then sweeping changes to the software's game library launch into open beta on September 17th. Speaking at an event held in Seattle last week, Alden Kroll from the Steam development team said that the changes would help players "find what to play next."

If you're a user of Steam, the most interesting of these is the library update, which overhauls how you browse and organise the games you already own. For starters, there's now a library homepage which highlights particular games. At the top, a section called "What's New" highlights games that have had recent updates or community events. Below that, it shows a mixture of games you have bought or played recently, and then games your friends have played recently. 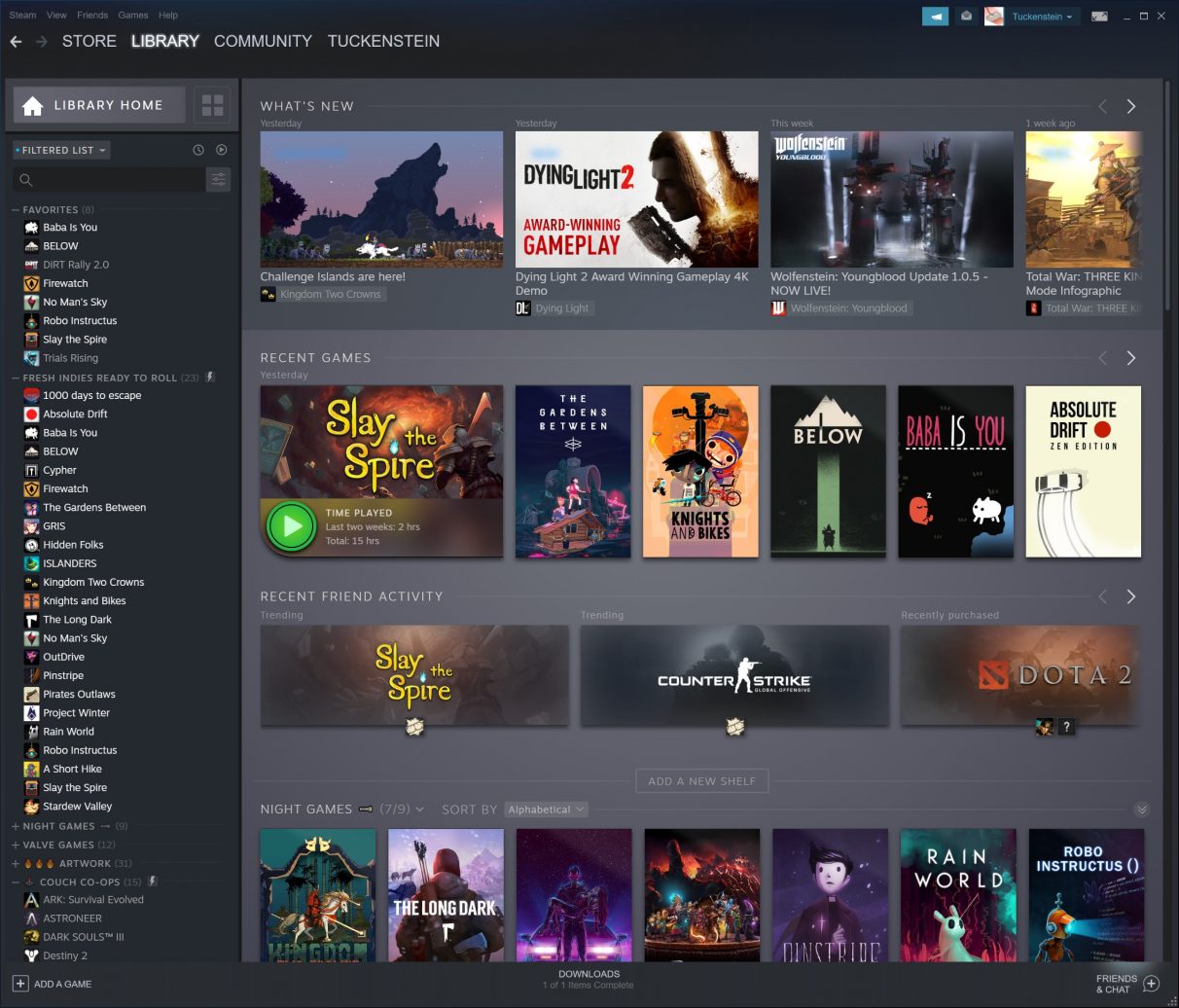 The games themselves are depicted via attractive cover art, and there's some logic behind the way it chooses to show the games your friends are playing. For example, it won't show you again and again that your friend who plays Dota 2 every day is still playing Dota 2 every day, unless they're suddenly playing it more than normal.

Beneath these, the homepage shows user created game collections, which Steam previously called categories. You can create and title a collection and then drag-and-drop games from your list of owned games, which still runs down the left-hand side of the screen. You can then display these in rows on the library homepage. If you've already set up categories in your Steam client, these will auto-convert to collections. 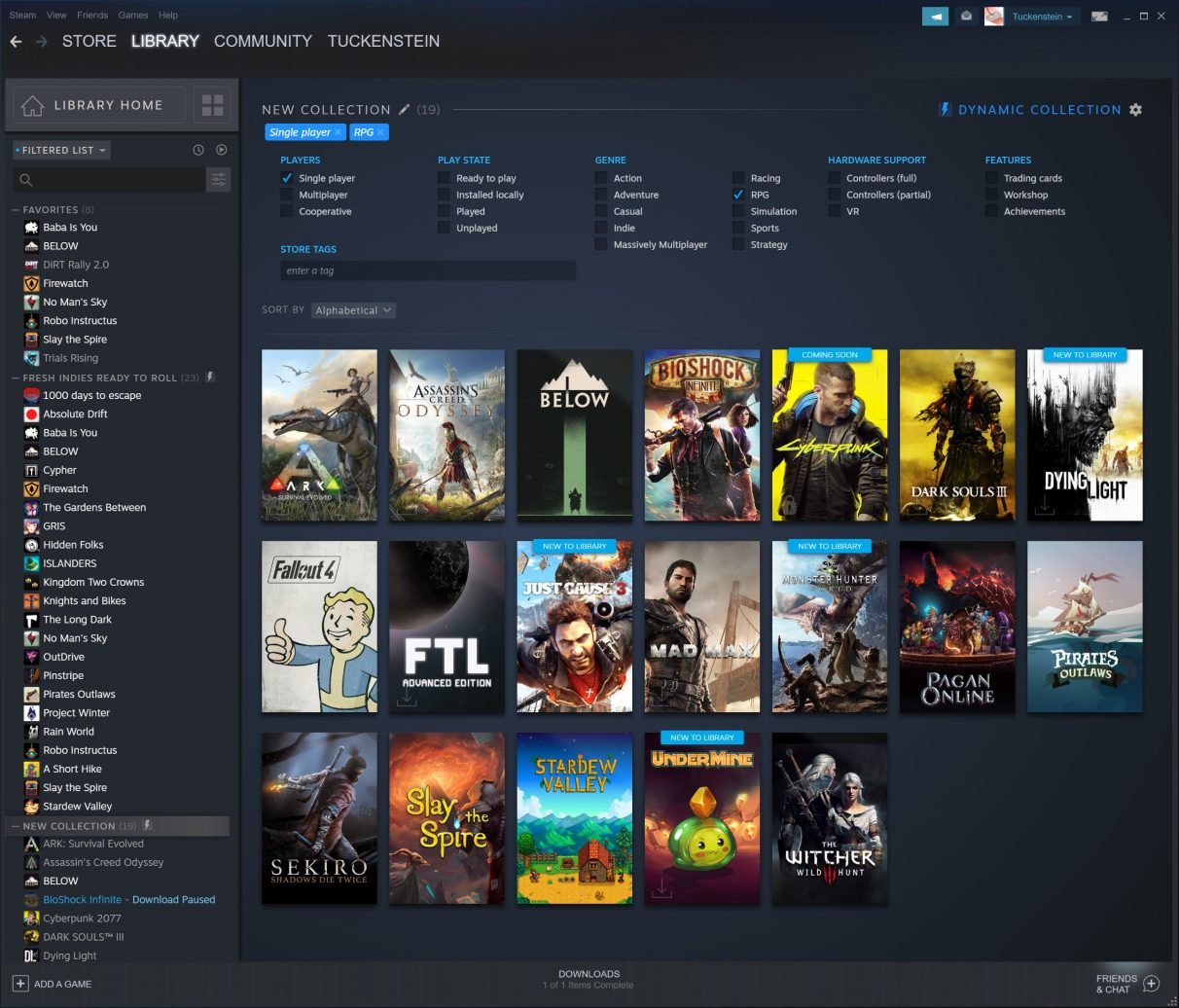 More interesting are the new 'dynamic collections'. The box to search games in your library now lets you filter by Steam store tags or particular game features. For example, you can search for any game in your list tagged 'role-playing game' which also has controller support, then click a button to turn that search filter into a dynamic collection which appears on your homepage. It's auto-populated with relevant games you own, and any game you buy in future that meets the criteria will be automatically added.

Most of these features have likely been present in any media library software you've used over the past 5-10 years, yet they seem a gross improvement on what Steam offers currently. Regular bundles and Steam sales mean that people often own many games they've never played, and have perhaps forgotten they own. Speaking personally, I regularly open up the Steam interface and simply stare, blank faced and paralysed over indecision about what to play. I welcome anything that nudges me towards this or that.

If you click on a game in your library, you now get a more attractive and detailed page with details of the game. If you've played the game recently, your achievements and screenshots are shown at the top as a 'post-game summary'. Further down you'll find information on your friends, and highlights from the community content surrounding the game, including Workshop items and guides. The 'recent news' section, which currently displays a mixture of developer-created stories and those from websites such as RPS, has been removed. 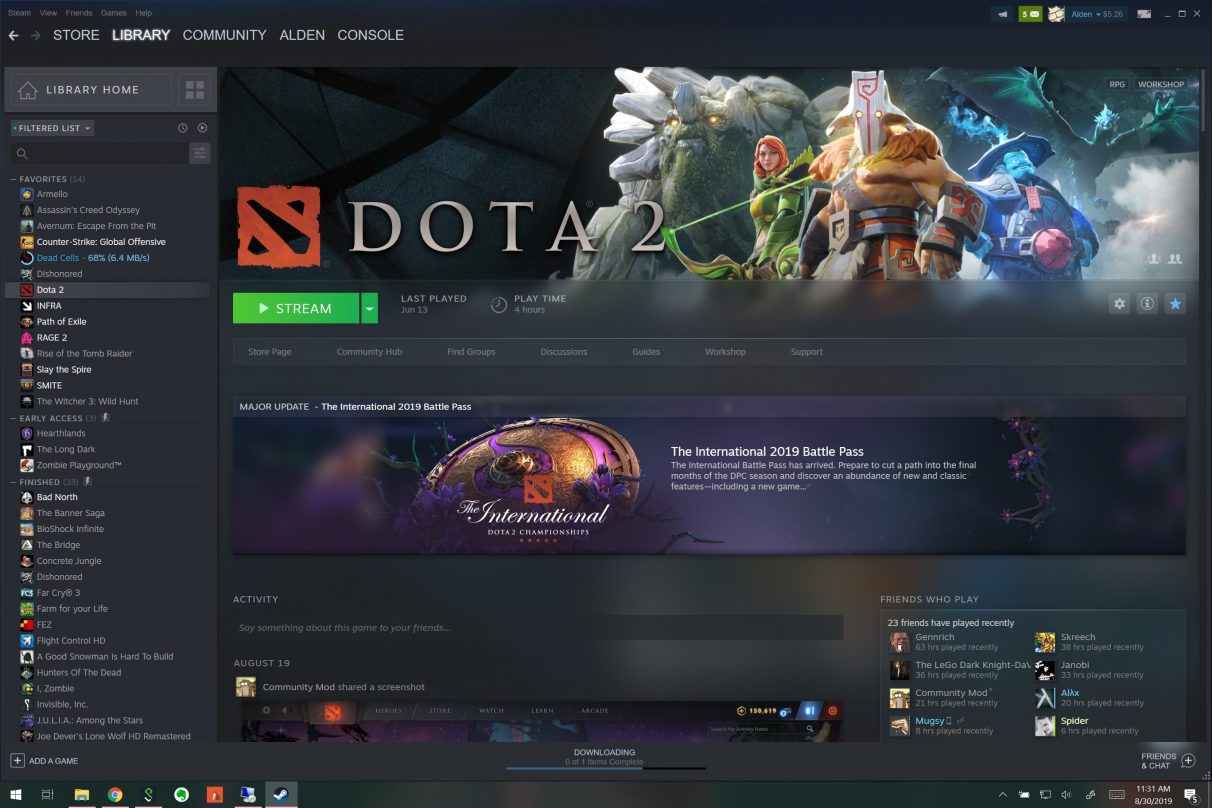 Steam Events function as a semi-replacement to this newsfeed. The feature, which rolls out today, is a richer editor for developers to use when sharing news about their game. Valve define an event as anything about a game that a developer would want to share: a patch or update, a community challenge or tournament, a developer Q&A, a new game announcement, release or beta, and so on. The editor for creating events allows you to embed information from Steam Workshop items and game store pages, and will allow developers to upload text in multiple languages to be served to readers based on their location.

Once the library update is live, these events will then appear in more places throughout the Steam client. Developers can post and schedule them to appear with bespoke art at the top of their game's community hub, store page, and the library pages. It's these Steam Events that appear in the 'What's New' area at the top of the new library homepage. Clicking the event in any of these locations will cause the attached blog post with event details to appear as a scrollable overlay, so the user is not fully pulled away from whatever they were doing. Developers will also eventually be able to choose to have the event news emailed to players of their game (and players are able to opt in or out of receiving said emails). 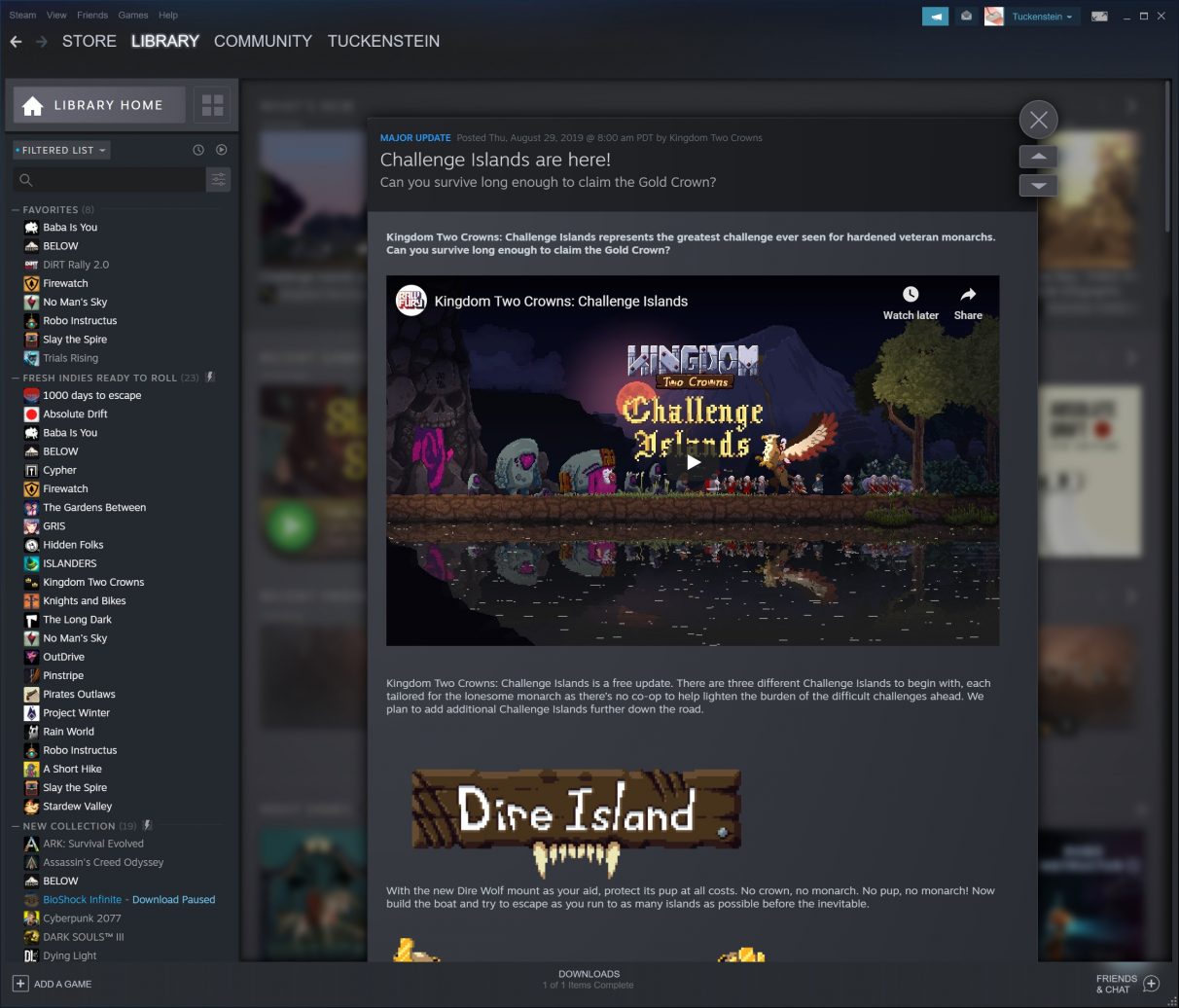 Lastly, Kroll spoke about Steam Labs, the set of experimental tools that Valve launched in July. "It's designed to be this place where we can experiment with new features without having to develop them into a full, scalable product, and it gives us the opportunity to gather feedback from developers and customers that helps us influence what direction we take those features," said Kroll. The first three experiments launched in July, and Valve say "millions of users" have interacted with them since.

Tomorrow, September 5th, an update is coming to the micro trailers experiment, which offers 6-second-long auto-generated montages cut from existing game trailers. The update makes the micro trailers available for every game on the Steam store, with new montages generated automatically as new games release. Previously the Steam Labs experiment page only offered trailers for a limited selection of games released before July 11th.

Kroll said that, if the micro trailers proved popular enough that Valve wanted to roll them out across the site, they'll first ask developers for permission to cut up their trailers in that way, and give them the tools to upload their own bespoke 6-second montages.

On the same day, a brand new search page experiment will launch, offering options to search the Steam store using price and sale filters, store tags, and with infinite scrolling.

Kroll also briefly spoke about another experiment they're working on with the game developer Lars Doucet. In July, shortly after the launch of Steam Labs, Doucet outlined and launched a prototype for his own self-made experiment called Steam Diving Bell. It's an effort to address Steam's problems with discoverability, and Doucet compares it to a "Wikipedia binge." You give it a starting game, it offers 8 other games that are similar according to different parameters, you click on one of those suggestions and are presented with 8 more and so on. Valve are working with Doucet to create a better version of the prototype, with access to the Steam database proper.

Every one of the Steam changes outlined by Valve at the event seemed for the better. The game library in its current state looks ancient, with most of the screen taken up by poorly presented information that I hardly glance at. Likewise, giving developers tools like Events which reflect the modern nature of games as services seems long overdue. 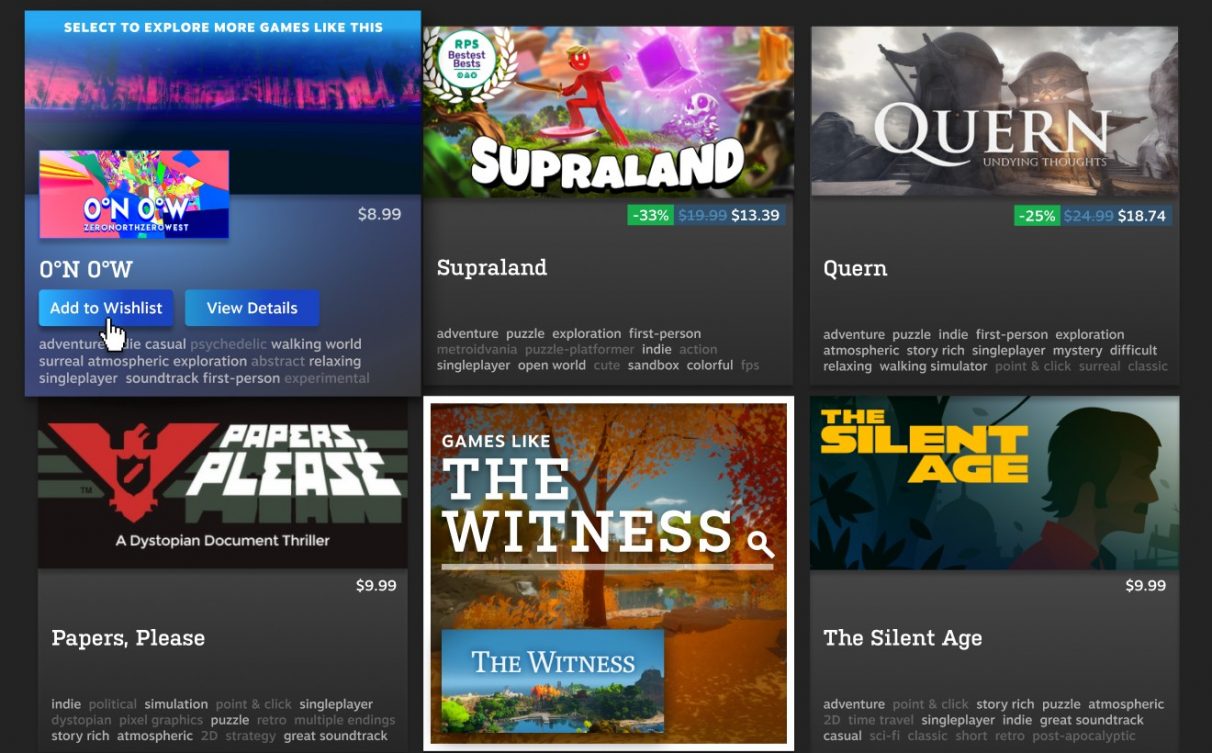 These changes do not address Steam's most urgent problems, however. A feature like Steam Events most benefits games that are constantly updated, which are in most instances going to be already popular multiplayer games. There were no changes, bar Steam Labs experiments with uncertain futures, that are likely to benefit smaller games, indie games, games struggling with discoverability. There were also no changes designed to help the store's (rather than the library's) problems with curation, or the Steam community's problems with moderation. Kroll suggested that the library redesign would inform future changes to the store, but there was no stated timeline.

You'd also be hard pressed to call these changes a response to recent competition from the Epic Game Store, which launched in December 2018, which has a growing collection of games as time-limited exclusives, and which takes a 12% cut on sales versus Steam's standard 30%. Steam already has a far richer feature set for both developers and customers when compared with the Epic Games Store, and a few new tools and a design refresh is unlikely to draw back developers tempted by Epic's deep pockets.

What does feel different is the nature of how we found out about these changes. Previous updates to Steam have tended to be discovered when a game developer stumbled upon them and wrote a post about it on Reddit. Kroll acknowledged that Valve are "not very good at talking about when we make little changes to Steam, so there's a lot of things that we quietly ship and that don't get a lot of notice." This is speculation on my part, but that Valve decided to not only announce these Steam changes ahead of time and invited press to Seattle to do it perhaps indicates that they know they need to do more to highlight what developers get for that 30% of revenue.

Kroll said that - particularly with the Steam Labs work - their goal is to make the act of browsing, finding and organising games entertaining. I'm certainly looking forward to futzing around with the new experiments when they launch tomorrow, and having a more attractive library to use later this month. Still, I hope for bigger and bolder changes from Steam in the months ahead.