There's a ticker at the top of Creators.TF project website. "0762 days since the last major update", it reads, with the aim of inspiring people to join a homebrewed Team Fortress 2 update campaign. Someone has to, they reason.

Long-time Valve employee Greg Coomer has told Valve News Network host Tyler McVicker that "hardly anyone" is working on it, and they're "just going to try and not shut it down or anything". This isn't surprising, but it's still sad to see such stark confirmation. I'm glad to hear the community has something brewing under their many hats.

Official updates haven't been ruled out, but they do seem unlikely. McViker brings up Geoff Keighley's leaked interview with the development heads for Half-life: Alyx, where - according to him, although this isn't in the transcript that's still online - they mention that many people have been brought over to help with its development. There's also the way TF2's playerbase seems to have dwindled below the point where Valve are willing to commit to anything big. Here's McViker's video where he goes over all this.

As he points out, regular Steam traffic trackers misrepresent how many people are still playing. SteamCharts tells me 38,716 are currently playing, while Teamwork.TF only reports 6215. That's because their trackers don't count idlers, who farm items to sell by lurking around and waiting for rare hats to drop. McViker also says his unnamed sources report that Jungle Inferno, the last major update, "was a disappointment for Valve".

McViker also spoke to an anonymous Valve employee who's worked on TF2, who had this to say:

"Valve employees keep looping around to different projects that the company has going on. Why would Valve want to declare that TF2 is permanently dead when it still makes them money? What if Valve comes up with an amazing update idea that they want to implement for TF2 in the future? What if there's a slow period in Valve's projects and the Team Fortress team has time to make something new? Valve doesn't know right now what they will release in the next content update. They would love to if they could, but they have more important things to work on. Just like Valve won't promise an update timeline because they might backpeddle on it, similarly Valve won't ever announce that TF2's development is over because they might backpeddle on that too. The backpeddling works in both ways."

"In short, that means players will have to sit in eternal anticipation of the next update. Valve will not tell you that nothing is coming."

From my perspective, they don't really need to. Team Fortress 2 IS twelve years old, and it's hard to blame Valve for moving on after nearly a decade of major updates. They still make small tweaks, fix bugs and organise seasonal events, like the recent Scream Fortress - although the brunt of the work is done by the community.

I do like the sound of the "TF2 Community Celebration". People have been creating nonsense for TF2 since the game came out, but this is a coordinated attempt to regularly update community servers with work from a dedicated team. Their website mentions "maps, cosmetics, weapons, taunts, skins, unusual effects" and more, along with a contract system "very much similar to what Valve had presented to us". Look, they've even stuck their plans in a slick flowchart. 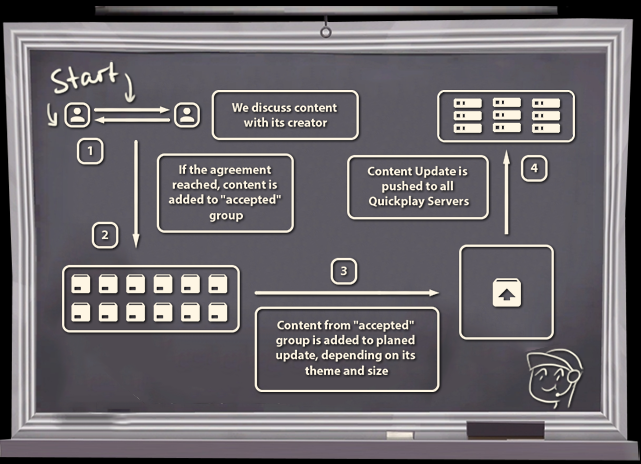 They're recruiting, if you're interested. Please join them and make me stuff. TF2 is still fab.