Despite Gaijin's free-to-play omni-sim War Thunder starting out exclusively as a game of World War 2 aerial combat, recent years have seen it take the fight to Wargaming's rolling festival of tankitude, World of Tanks, offering its own accessible yet semi-realistic take on armored ground battles.

Sneaking in just a week before World of Tanks' v1.0 overhaul, War Thunder has refreshed itself with a shiny new graphics engine and a slew of iconic Cold War era tanks to drive, including that chunky American workhorse; the M1 Abrams.

War Thunder's Version 1.77 (officially titled 'Advancing Storm') feels like the most significant change the game has seen in a while. The star of the show here is a new renderer, which, while not quite offering as night-and-day a transformation as World of Tanks' upcoming overhaul promises, doesn't look half bad. For those with a halfway modern GPU to flex, the game now boasts much more natural lighting, pooling and rippling water and some nicely atmospheric rain effects.

Those of you fancy gits who have played long enough to reach the Cold War era of War Thunder's tech tree will find themselves rewarded with the American M1 Abrams, British Challenger, the German Leopard 2k, French AMX-30B2 Brenus (bristling with reactive armor plate to save it from ATGM hate) and the Russian T-64B. These are all able to be earned through regular play. In the premium-only corner comes the Magach 3, an Israeli refit of the old M48, as well as the AMX-30, which is actually just a cheaper, older version of the AMX-30B2, but it does pay out extra currency, if you want a fast-track to semi-modern tank tech.

It's not just the visuals and roster being updated. They've also gone and given the ground combat side of the game a massive audio overhaul, with some of the bigger guns now generating echoing, reverberating noise worthy of their caliber, especially in the case of high-explosive rounds. Internal noises have also been greatly improved, so you can hear internal mechanisms locking into place before shots, and spent brass rattling around afterwards. 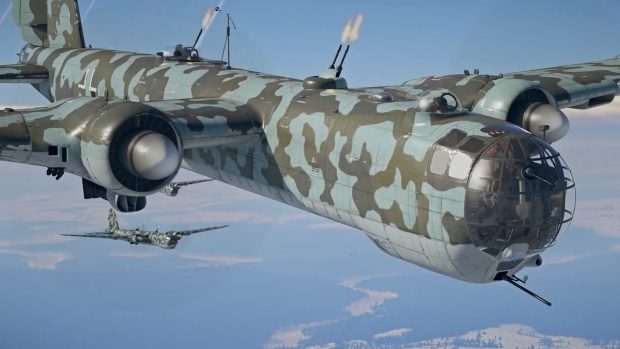 While this is clearly a ground-focused update, there are a smattering of new planes to fly, including a couple more early jet-fighters such as the Russian La-200 and French MD.452. There's some more traditional WW2-era planes too, like the British M.B.5, Japanese Ki-108 and the community-made German He 177 A-5 Greif (pictured above), which is not only a bit of a mouthful to say but also an enormous slab of murder-metal.

While I'm not privy to Gaijin's release schedule for the year, it feels like this could be the last major update to the game until they officially integrate the still-in-testing naval combat layer into the game. It'll be interesting to see how they address balancing encounters containing player-controlled ships, tanks and planes, as all of those will be a required foundation for their ambitious World War mode, which sounds like a mega-scale multiplayer version of their existing dynamic campaign system.

War Thunder 1.77 is out now, and the game is free-to-play. You can grab it direct via its official site, or via Steam. You can also see the full update patch notes here.