Warhammer 40,000: Gladius - Relics of War is an unconventional 4X game that doubles down on the perpetually gloomy universe’s penchant for conflict by cutting out diplomacy entirely. The Space Marines, Astra Militarum, Orks and Necron are all at each other’s throats, leaving them no time to work things out at the negotiating table. War, then, is Gladius’ raison d'être, with Dreadnoughts, Tankbustas and Necron Warriors spilling out onto the hexy map, looking for a fight.

Taking diplomacy out of the equation is a gamble. It’s a system that’s inextricably linked to the genre, but that’s also because the fundamentals of 4X haven’t been shaken up all that often. We’ve seen Endless Space 2 and Stellaris put more of a focus on narrative, and Civ changes with every incarnation, but there’s still a long list of things that every game does and is expected to do. 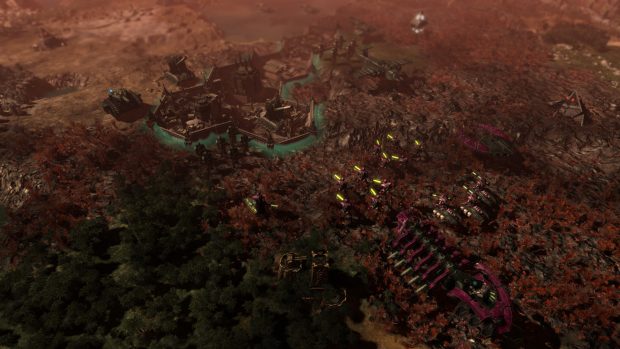 Diplomacy, though, has always been the one system that almost every 4X game has struggled with. It’s not that there haven’t been successes -- my preference is the personality-led diplomacy of Alpha Centauri -- but it often ends up feeling overlooked and perfunctory. Yeah, I’m looking at you, Total War. Regardless, it’s typically woven into the fabric of the game, connecting all the other systems, from warfare to trade. So when you remove diplomacy, you’re getting rid of a lot more than a single system.

By taking an axe to the negotiating table, Gladius cuts out all interactions that aren’t done at the end of a power sword. There’s no trading -- with the exception of buying stuff from a neutral shop -- or treaties or communication of any kind. Everyone, including the two Imperial factions, is at war with everyone else, duking it out over control of a rather unpleasant place. 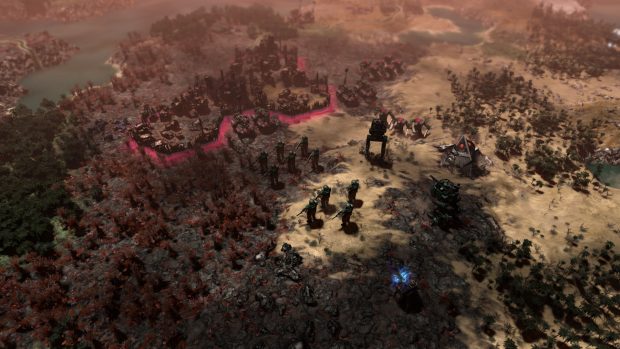 Like so many of the worlds that are unfortunate enough to become battlefields for Space Marines and their multitude of foes to fight on, the titular planet is not the sort of place you’d want to own. Marked by chaos and marred by catastrophe, it’s one giant tomb full of fallen cities and hostile wildernesses. So when you’re not fighting one of the other factions, you’re probably going to be shooting at horrible alien beasties, intent on cracking your armour and snacking on your insides. Unless they’re the ones that can take over the feeble minds of your units, turning them against you.

Gladius doesn’t feel entirely unlike Warhammer 40,000: Armageddon -- think Panzer Corps with Space Marines -- echoing it’s hex-hased battles across a hostile world. Being a wargame, however, Armageddon’s scraps are much larger and visually more abstract than Gladius’ brawls, which typically involve a handful of squads on each side. Where they really feel similar, however, is in importance they place on the weapons each squad carries. Their guns, melee weapons and grenades all come with different stats, ranges and mechanics, making smart positioning and building mixed armies vitally important. 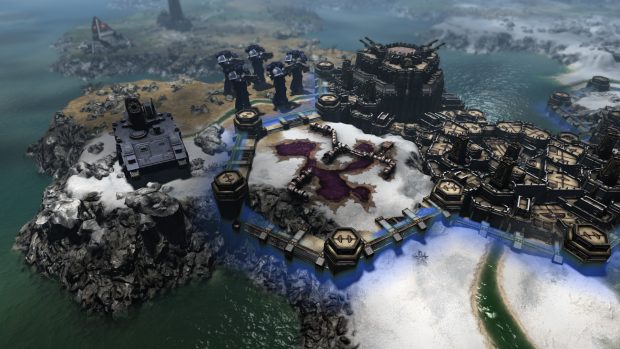 This is a holdover from the tabletop game, of course. Few Warhammer games -- Sanctus Reach being a rare exception -- really follow the original game, and Gladius certainly doesn’t, but when it comes to violent confrontations, it does a surprisingly convincing impression of its tabletop progenitor.

Four factions is an unusually small number for a 4X affair, but none play alike. Take the Space Marines, for instance. The burly, armoured space fascists aren’t in the city-building racket, instead focusing on one huge base and then expanding with small outposts. I’m a sucker for a good single-city faction like Civilization V’s Venice of Endless Legend’s Cultists, and I’m always happy to cut out some of the superfluous faffing that comes with managing a large empire.

Even among the other factions, however, empire management isn’t a massive concern. There’s a simple economy with a few easy-to-generate resources to gather by plonking down more buildings, and the citizens living inside the cities can be ignored as long as their loyalty remains high. There’s also hint of Endless Legend and Civ VI, with settlements physically expanding as they swallow up tiles for their precious resources and sprout new districts. 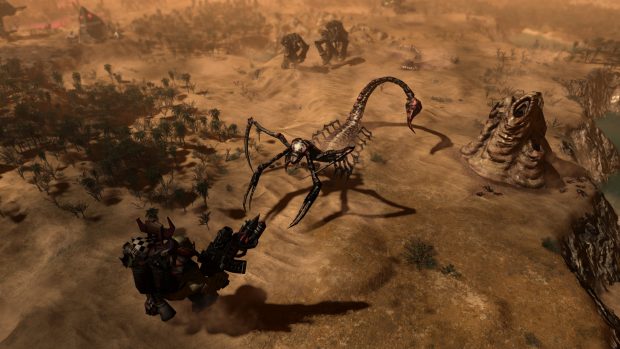 All the diplomats may have been killed off, but it looks like all the science boffins survived. Each army gets a unique tech tree, and they really benefit from this 4X romp’s uncharacteristic focus. There are 10 research tiers, but you only have to research two techs before moving onto the next one, and almost all of them give you a new toy to play with, whether it’s a weapon, like a frag grenade; new units, from huge Dreadnoughts to new bands of Ork Boyz; or special abilities, including orbital strikes and temporary buffs. There are mercifully few incremental stat changes or minor economy improvements.

There are a few tech niggles that I hope are sorted come launch, though, specifically relating to the unlocking of new units. Every unit is connected to a specific building, which isn’t unusual, but here they're separate technologies. To get the Space Marine’s first aerial unit, you need to first research launch pads, and then you’ve got to research the unit itself. It would make more sense for the buildings to come with at least one recruitable unit, so when you research them you can actually put them to use. 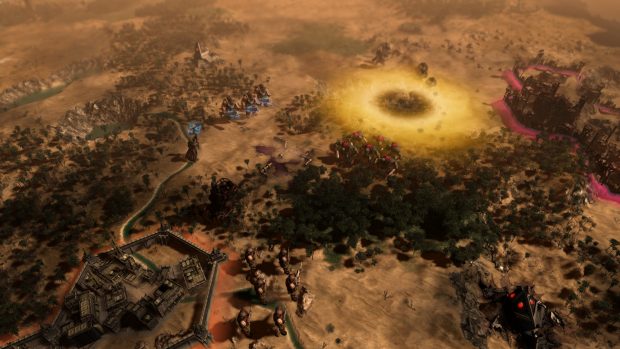 Instead of filling the gap left by diplomacy, Gladius keeps the focus on action and conquest. Even the only other victory condition, finishing your faction’s quest, will send you all over map to get into lots of fights. The broad range of units and their diverse characteristics means that the combat does have a lot of staying power, however, especially if you’ve already got a deep obsession with these angry soldiers and their massive war machines.

As someone who tends not to be an aggressive 4X player, I did start to crave different kinds of interactions and for there to be any kind of structure to the wars. I missed the surprise of an ally’s betrayal or the moment when a cold war becomes a very, very hot one -- things you don’t get when it’s all war, all the time. I didn’t miss the incessant pestering from chatty AI opponents, though, nor constantly trying to placate them with deals and bribes. Just stomping around a planet smashing everything is, admittedly, a cathartic experience.