If you click on a link and make a purchase we may receive a small commission. Read our editorial policy.
Developer: Pixelated Milk
Publisher: gaming company

As your tree trunk-limbed mechanic, his oaken legs rippling under his dungarees, sets a row of sunken-cheeked, hollow-eyed Nazis on fire with a makeshift flamethrower, and your lab-coated doctor follows up by yeeting a vial of debilitating probably-not-piss-but-I-like-to-think-it’s-piss at an SS officer’s forehead, a thought may occur. Considering history is a design constraint here, brutal but poignant turn-based tactical RPG Warsaw does a fantastic job of making classes and abilities feel as interesting as any sci-fi or fantasy setting.

It's the history of the 1944 Warsaw uprising, to be exact. The game places you in charge of the doomed but determined resistance and asks you to fight tooth and nail for a cause that, tragically, you already know is destined to fail.

Kicking off a mission drops your chosen team of four -- and whatever supplies you’ve opted to bring along -- onto a 2D map of the titular city. You get a kill X things or find X thats objective, and a limited pool of action points that slowly tick down as you explore. You can spend time searching for non-mission related story events and supplies, but you’ll fail automatically if you run out of action points before you finish your main objectives. 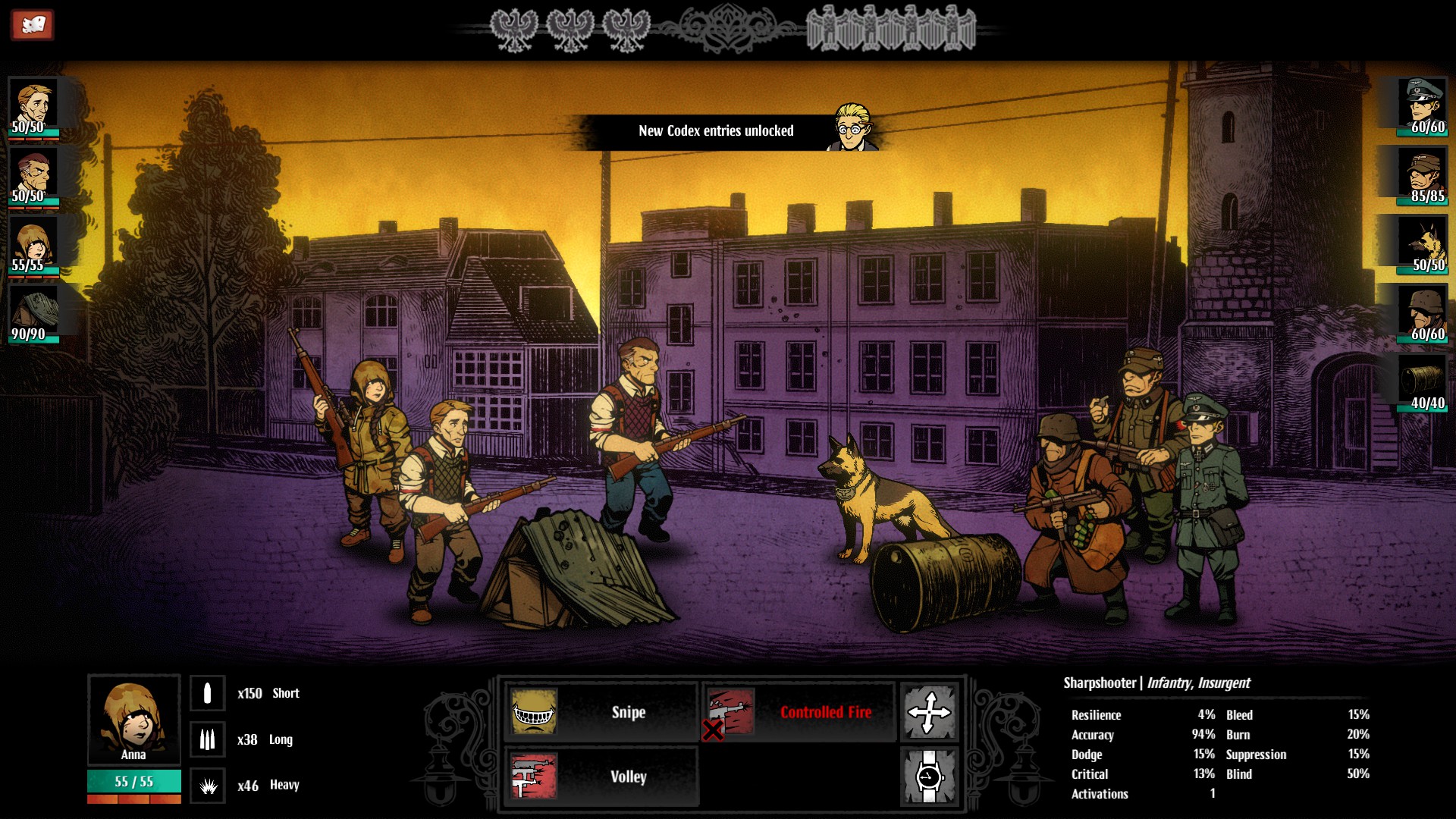 Encounter locations are hidden, initially, but you get some relatively vague but reasonably useful compass arrows when you start to close in on one. You can also spend some of those action points to use flares that reveal a portion of the map, or medikits, or compasses that make your AP tick down more slowly.

As far as 2D maps go, I can’t remember the last time I encountered one doing quite so much thematic heavy lifting. As your primary conduit to the city of Warsaw in its entirety, the map gets the unenviable job of capturing the desperate, fated, defiant mood of the uprising, channelled through the collective spirit of the city as a whole. Its solution is a stealth system that gives certain Nazi groups detection range, whilst buildings block line of sight, turning a simple grid of streets into an imposing concrete maze.

This constant threat of detection from unseen foes means that what could easily have been flat, perfunctory navigation has you scooting your team through enclosed alleyways, and weighing up the risk of creeping around one more patrol than you can feasibly take down to nab the supply crate sat just on the periphery of their detection range. Atmospherically claustrophobic and but functionally elegant? I’ll take six, please. 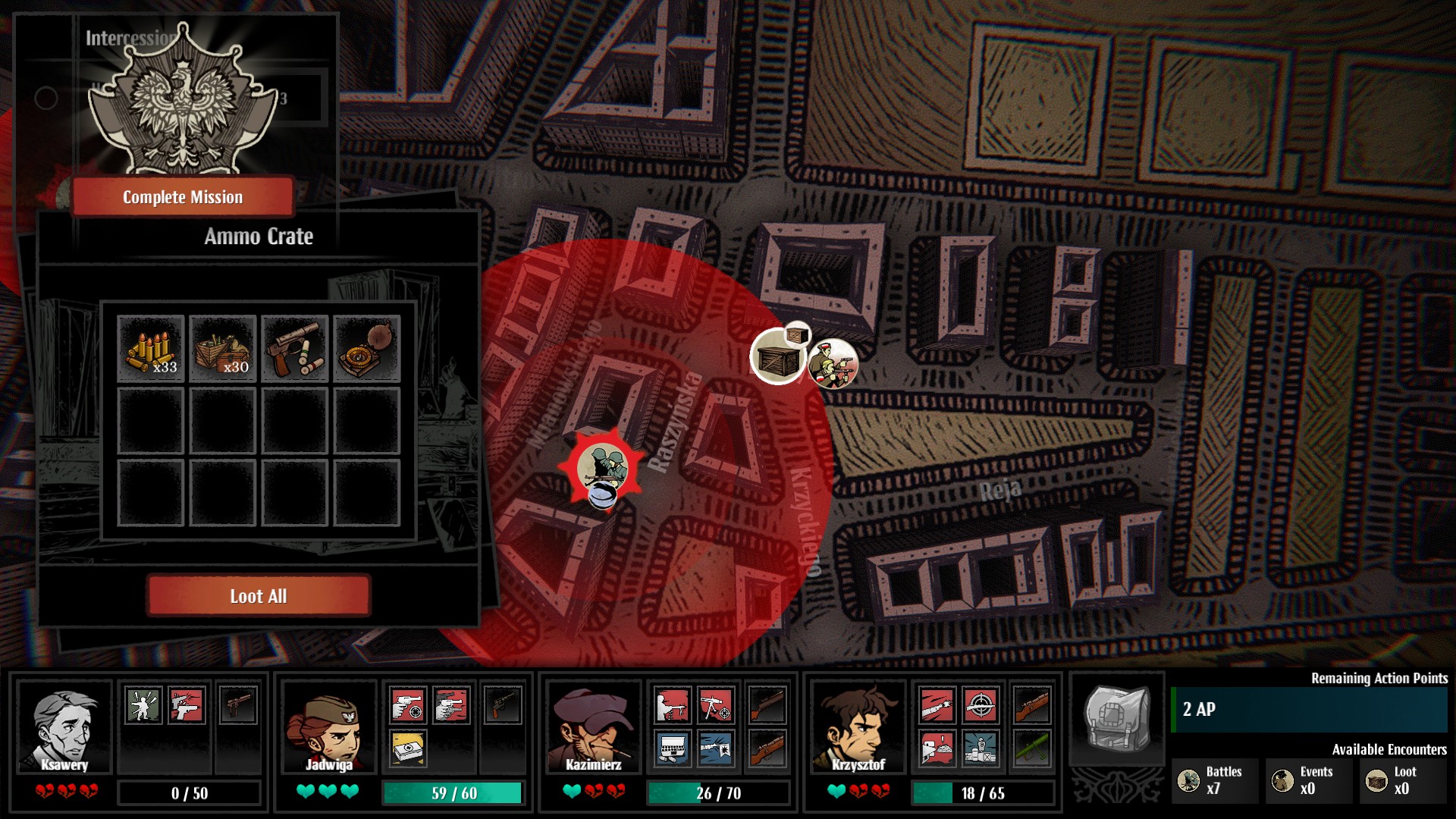 Between missions, you’re shown a story event, then taken back to plan your next excursion from behind the boarded windows and bombed concrete of your hideout. Supplies act as a currency to repair the broken weapons missions often reward you with, buy precious ammunition and items for use in the field, and hire recruits. Recruits are treated as separate from the primary characters you begin the game with, and who periodically join your team at story intervals, in that only your main team can learn new skills by spending mission-awarded medals. It seems like an odd choice in a game that wants to celebrate the people who took part in the uprising, dividing them into ‘heroes’ and ‘also-rans’. A case of function superseding theme, without thought to what’s being inferred.

It’s also in your hideout that you’ll be able to choose new missions, which play into an overarching metagame involving keeping up morale in the various districts of the city. This is affected by mission success, spending supplies on bonus excursions, and the occasional story event. If the morale of an individual district falls to low, you lose the district. Lose the whole city, and you lose the campaign.

Depending on the mission types you get offered, sometimes this structure works nicely, providing an engaging loop of resource management, navigation, risk/reward, and battles. Sometimes, it feels like a hearty crank on the vice Warsaw seems intent on keeping your malleable skull firmly clamped in at all times. More on this in a bit, but first, a word from our sponsor: Killing Nazis! 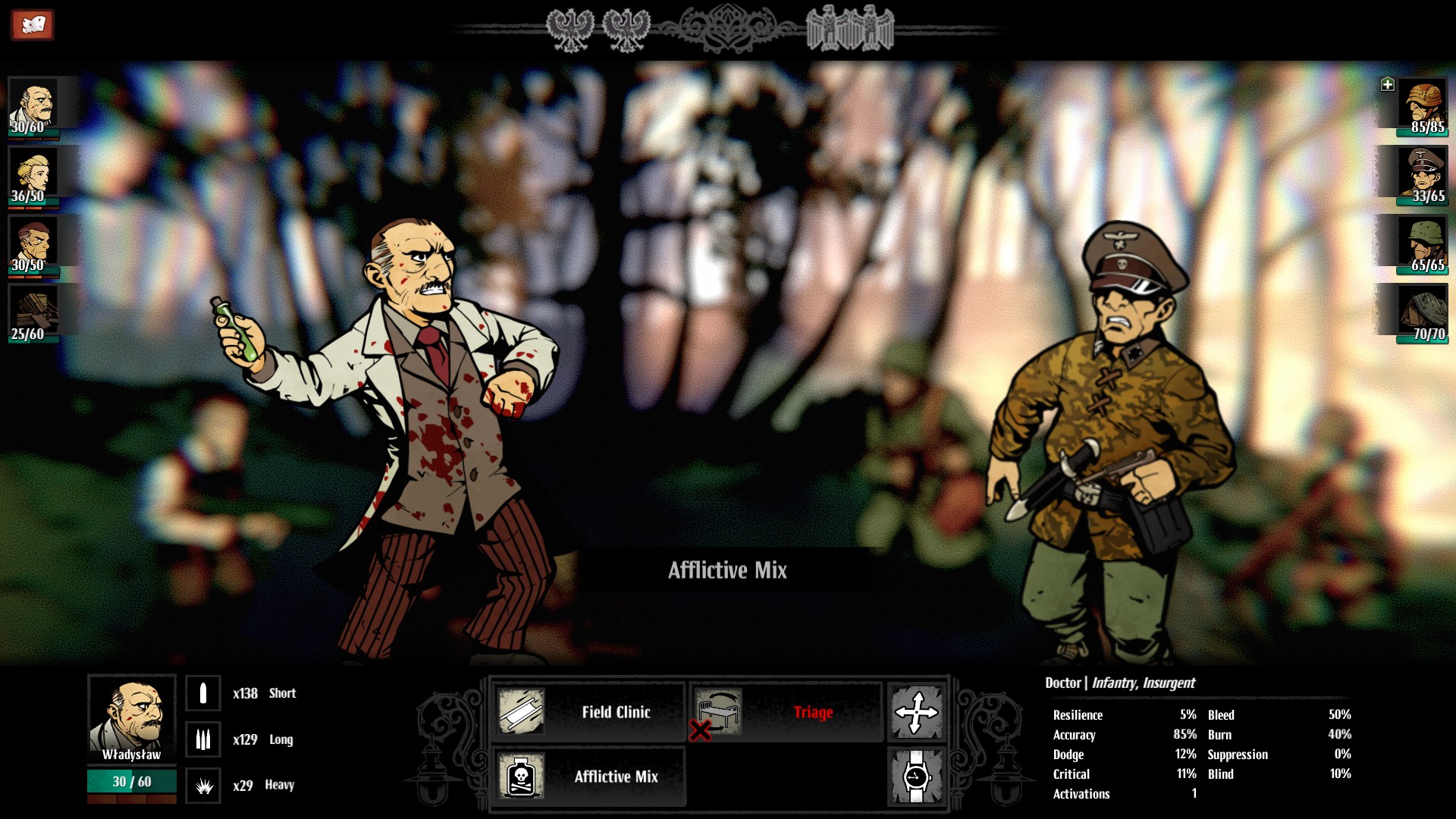 Killing Nazis in polite, turn based order, that is! Insert timely jape about pearl clutching over civility while the shadow of encroaching facism threatens to engulf us all. Anyway. Each turn both you and the enemy shithaüses alternate between activations. You can activate the same unit, and even the same ability, more than once, but each ability costs stamina. Each unit has three stamina, gets one stamina back per turn, and suffers aim and damage received penalties the less stamina they have. I’m a fan of this stamina business. Tactically, it stops you relying on repeating certain plays. Thematically, it means battles feel more hopeless - and the combatants more weary - as they progress.

Each side has two parallel rows of four positions, and both offensive and ancillary abilities have positioning requirements. A bazooka might need to be shot from the back four tiles, for example, while a pistol might require the unit to be at the front. This, alongside abilities that force repositioning, a cover system, buffs and debuffs, and flanking bonuses on attacks that target units in the parallel row, create deceptively deep fights that open themselves up to tonnes of experimentation.

Abilities are pleasingly varied, both tactically and thematically. Enemy variety, too. Missions consistently fling exciting new flavours of arsewaffle at you, forcing you to reconsider priority threats. Your aim becomes building and maintaining a team that can work well together against whatever configuration of eugenicist piss-quaffers you run into. 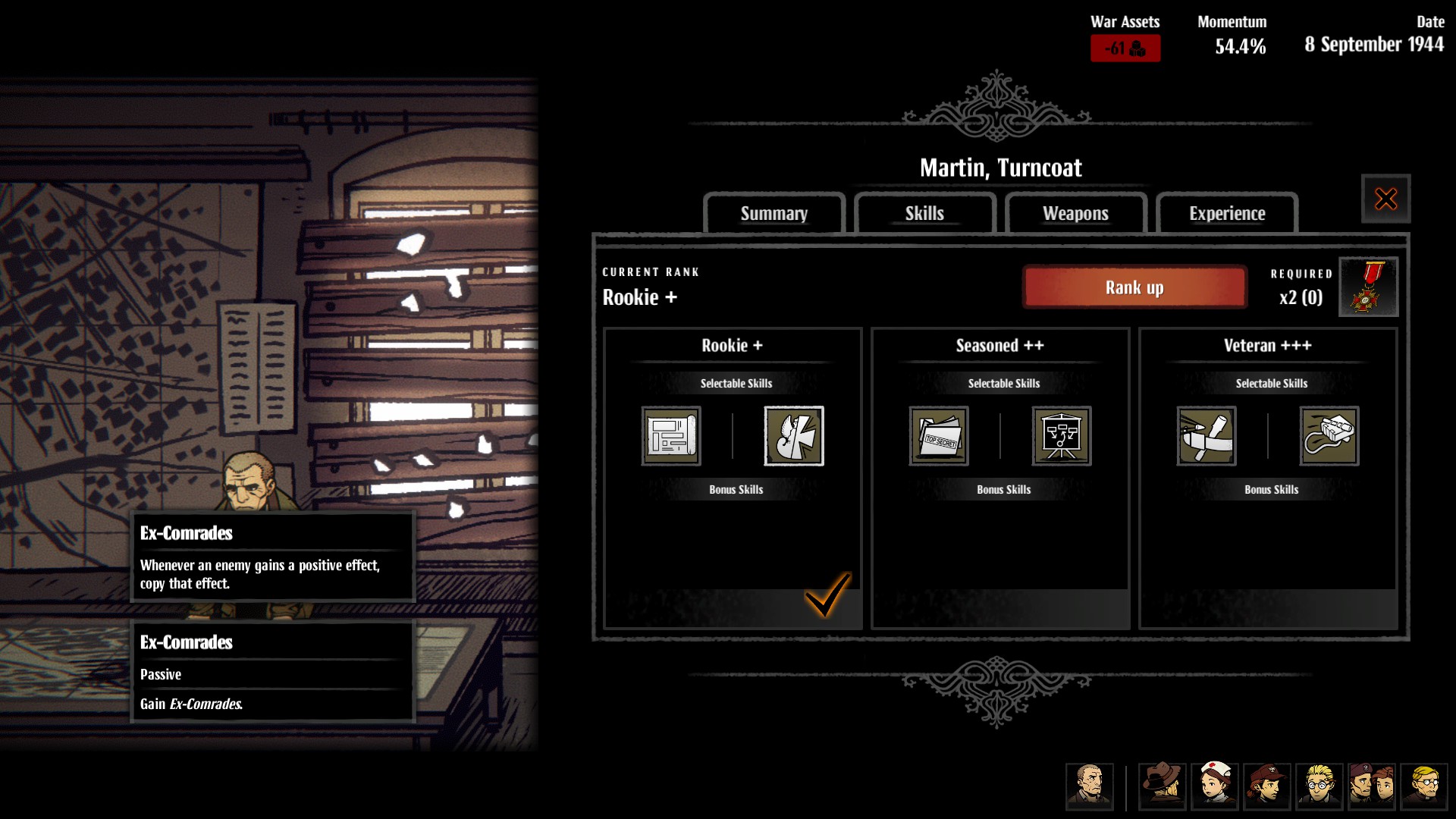 Sure, it means grenades that knock their target into the parallel row, the aforementioned vials of vaguely science-themed liquid, and various other leaps of imagination. But, it does give battles a comic dynamism to match bold lines and brash caricatures of the art. As such, these heightened but grounded conflicts are the closest Warsaw gets to levity. A fine line, for sure, but the game treads it deftly.

There’s a lot of understated character work in the art, too. The sombre, scared but determined expressions on the faces of the inexperienced recruits really sell the idea that these are teachers, and parents, and in some cases schoolchildren, that have grabbed whatever meagre arms they can and joined the fight in a last ditch attempt to smash the fash.

Here’s a thing, though. These battles are, at times, so utterly gruelling that I occasionally caught myself wanting to take a break to play Darkest Dungeon, a game I don’t enjoy, as some sort of palate cleanser. Even after a recent patch that reduced enemy health, both sides have about 25% more health than seems reasonable or advisable. Supply missions, where you might have to fight just one or two patrols, are fine. Missions where you need to take out three, or even five patrols in a row, are a dull slog. 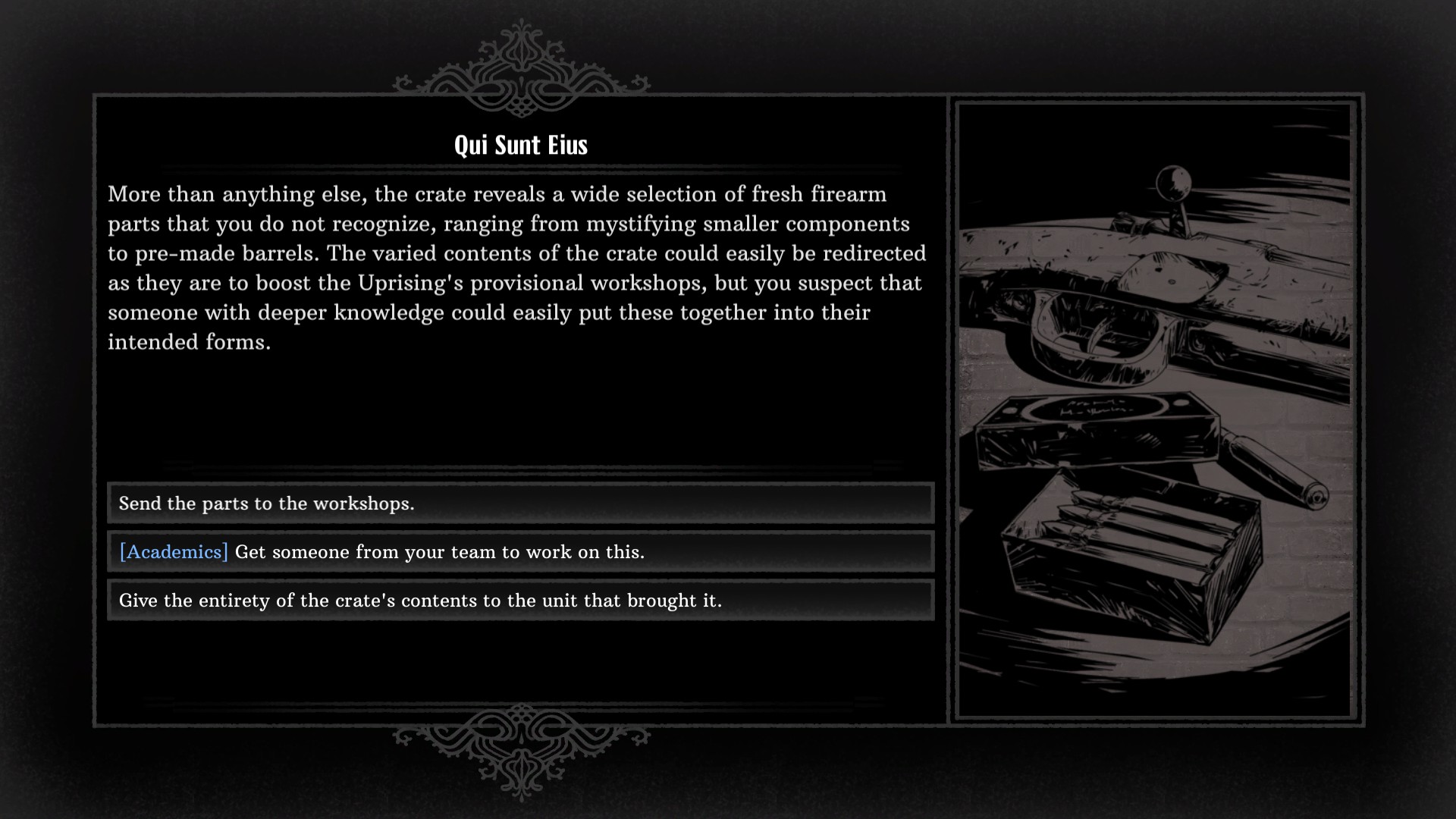 Even when things are going well, you’re still faced with the fact that any healing done on mission is temporary: Once finished, your team revert to the lowest health they had during, meaning you’ll have to let them heal up by leaving them behind on your next mission or two if you want them fighting fit again.You could always string them along in perpetual agony by feeding them medikits and healing buffs, of course, but when they’re dead, they’re dead.

Maybe it’s because I’ve been playing more roguelikes and lites than normal, but I’m starting to become wearier of declaring games successful based on whether they mirror their harrowing themes with frustrating or isolating systems. "Thinking about the subject matter makes you feel bad, and playing it is pretty awful, too! What a cohesive masterpiece!" -- me, when the Last of Us came out, and also probably last week about something.

Thing is, I’m just not sure with Warsaw. It feels almost like a history museum exhibit designed to really hammer home the point sometimes. It’s undoubtedly brave to risk alienating huge swaths of your player base in service of refusing to turn a tragic event into funsies, but this does mean, as you might guess, very few funsies.

In its mirroring of Darkest Dungeon’s art and combat style, too, Warsaw has neglected to find its own analogue for that game’s most interesting feature, the negative traits. Characters can suffer wounds which penalise their maximum health until healed, but these are a dry substitute for DD's system, which could have added some much needed storytelling to the numeric back and forth of battles, some role playing to the dice rolls.

Would I recommend it? Not quite yet, no. Brilliantly named developers Pixelated Milk have already released a content roadmap for October. While some of it looks like bonus story events and the like, the sort of thing you’d expect from traditional DLC, there are also entire new systems and difficulty levels, changes that look like they’ll alter and enrich the game dramatically. It speaks to care and generosity on Pixelated Milk’s part, sure, but also makes me think Warsaw dropped a month shy of being ready.

That said, I can see myself returning to it after that month. Each character class I’ve found so far has been really distinct, and I still have a few to encounter. Warsaw has the makings of a genuinely fascinating, unyielding tactical game with a lot of heart and reverence for the events it’s based on. Still, as is, it’s currently a hard sell unless you’re really intent on a challenge that, while thematically resonant, often feels more arbitrary than it is complex.

Correction: An earlier version of this article referred to the "Jewish resistance". The Jewish resistance fought the 1943 Warsaw Ghetto Uprising, while the 1944 Warsaw Uprising that features in this game was led by the Polish Home Army.