A duck, a pig and a human walk into a store. They buy several grenades and a top hat for the duck which gives him +10% to ranged damage. You were expecting a punchline?

We've covered a bit of tabletop RPG turned tactical hybrid  Mutant Year Zero: Road To Eden before, but previously we only had a CGI teaser trailer and a few screenshots to go on. Now, The Bearded Ladies (again, amazing studio name) and publisher Funcom have released over half an hour of gameplay footage, giving us a better idea of what the post-apocalyptic world holds for us.

While the core combat engine looks to be more than a little bit XCom (so much so it's a bit cheeky, even), the interplay between the real-time stealth segments and turn-based combat looks like it creates some interesting scenarios, with optimal play involving picking off outlying enemies with silenced weapons before they can alert the area to your presence.

Some aspects of the gameplay are VERY XCom, including the armor system, seemingly represented by little metal shields by enemy health bars, exactly as in Firaxis' strategy revival. Overwatch is in as a key gameplay mechanic, and as usual, everything is bound by the two-actions-a-turn rule.

One major divergence in the design seems to be in how flexibly your party can rework their combat roles out in the field. Each character has a suite of major and minor mutations that grow over time, as well as some passive perks. One from each category can be active at any given time. On top of this, there's multiple weapon slots per character, meaning you can switch a single character from a shotgun-toting tank to an agile sniper with a few clicks.

While the first half of the video covers a lot of ground, including shopping, equipment loadouts and some backstory (including references to Stalkers and The Zone, making it feel almost like a hybrid of multiple apocalyptic scenarios), the latter half is dedicated almost solely to a single extended encounter. The trio of protagonists square up against a camp full of enemy mutants, and a rampaging giant robot that's taking pot-shots at both sides while knocking over buildings. 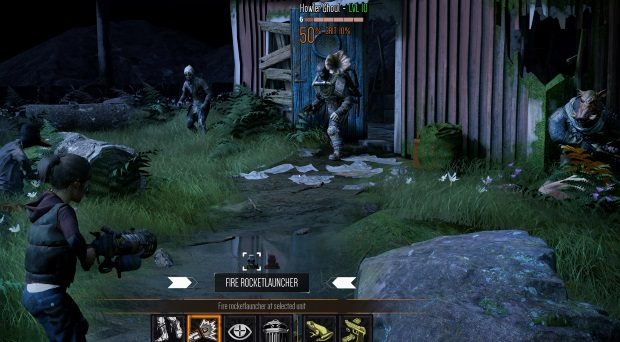 If there's one concern I have at this point, it's that the combat lacks a bit of oomph. XCom's slow-motion takedowns may have felt excessive at times, but it was always satisfying to watch an enemy backflip over cover after a point-blank shotgun blast, while enemies here seem almost nonplussed by damage up until the point where they collapse into a heap.

Still, unlike XCom, the tactical combat is only one (key) part of the formula here. Exploration, stealth and traditional RPG adventuring are key parts of Mutant Year Zero: Road To Eden, and those aren't demoed in full here. Reservations aside, I'm still excited for this one, and it looks like a fun crash course in an interesting pen-and-paper RPG universe.

Mutant Year Zero: Road To Eden is due out sometime this year. You can wishlist it on Steam if you want to be beeped when a more concrete date is worked out. Or you could just read RPS.