“There is no greater love,” sang the late Amy Winehouse, “than what I feel for shooting hostile robots in their glowing stomachs.” If you also can’t get enough of sci-fi space shooting, then you’ll be happy to learn that Destiny 2 [official site] can be pre-loaded now. That’s a whole five days ahead of its release on October 24. On top of that, here’s the exact times you can start playing. Activision aren’t taking any chances, are they?

It’ll be releasing at the same time worldwide, say Bungie, who also give everyone this handy image of release times around the planet earth. 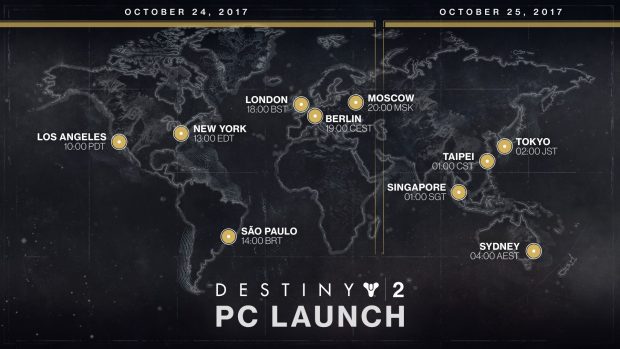 They definitely want you to play their videogame at the correct and proper hour of the day, spaceman. For UK folk, that's 1800 hours British Summer Time. For LA folk, it's 1000 hours Pacific Daylight Time. If your own local time isn't covered, you can check this link to timeanddate.com for an exact time.

You'll be downloading the alien-murdering zap ‘em up via the app formerly yet forever known as Battle.net, which is where Blizzo games usually live, but where Destiny 2 is also planting its flag thanks to being part of the two-headed gaming goliath, Activision-Blizzard. It’s the only place you can currently download the PC version. Here are the PC system requirements.

We’ve already taken a look at it, considering its been on consoles for a month now. Despite being a MMO-ish romp, it can still be enjoyed as a single player game, says Alec. And if you know nothing about this former console exclusive, Matt has you covered with an explainer on the series’ origins. I think it is a pretty-looking and pretty-feeling quest for gloves with slightly-higher numbers, with unforgivably bad writing and a silent, purposeless vacuum where a heart should be. But Amy and I, in this respect, have always been at odds.