Note - this piece presumes familiarity with Wolfenstein 2's entire plot, and as such contains some spoilers, though no specific character fates are discussed.

Out this week is part two of 'The Freedom Chronicles', a triptych of story-led DLC for last year's pretty decent singleplayer shooter Wolfenstein 2: The New Colossus, giving us a pretty clear sense of what's on offer from the season pass. (You can buy the episodes separately, but it ends up being 30% more expensive if you end up getting all of 'em that way). To whit, is it worth forking out for? In short: ehhhhhhhh. 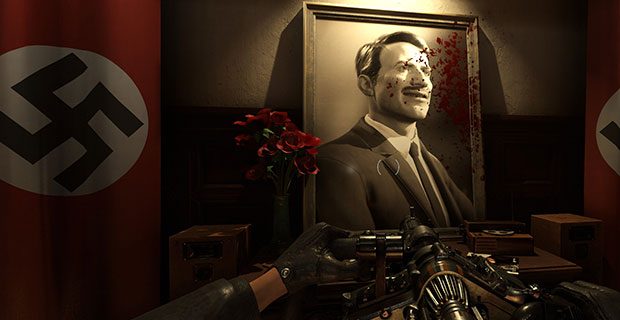 There's nothing wrong with either of the two episodes released to date, and I can't imagine some last-minute rot setting in for next month's finale, either. They continue Wolf 2's formula of solid action, with a side-order of (mostly) optional stealth, and oodles of comic book-grade sci-fi undercut by surprisingly introspective narration. It's all good stuff - but it is, in almost every regard, just the same stuff as the base game already offers.

I think Bethesda/Machine Games might have missed a trick in putting the first chunk of The Freedom Chronicles out just a couple of months after the full game, with others following on a monthly basis. Usually there's a good case to be made for getting the DLC out quick, while interest in a game is at its peak, but in this case it just feels like Wolf 2 didn't have quite enough time to breathe before being followed up by something so very similar. Absence makes the heart, and all that.

That said, there's a lot to recommend episode 2 if you played Wolf 2 as pretty much a straight shooter. I'm going to start with that and come back to the other one - there's no linking storyline between them, and you can play 'em in any order, after all. Episode 2, 'The Diaries Of Agent Silent Death', doesn't mandate a stealth approach - you'll find shotguns and mega-lasers aplenty - but it works hard to encourage you to play it sneaky assassin style.

For one thing, your character, the hard-drinking, hard-smoking, eyepatch-wearing Brit-assassin Jessica Valiant, can only have a limited amount of armour - so she's much more vulnerable than Wolf 2's BJ Blazkowicz or Episode 1's quarterback hero, Joseph Stallion. 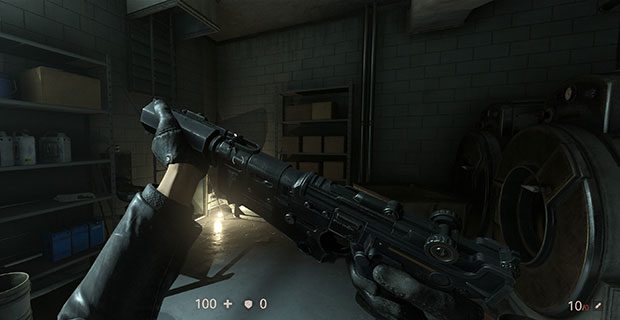 For another, you're blessed immediately with a silenced pistol and the constrictor harness (allowing you to crawl through super-tight passages), both of which you have to choose whether or not to unlock in the main game. There's a reasonable chance that folk who favoured an out-and-out carnage approach in Wolf 2 proper have yet to use the constrictor harness. Jessica's entire unlock tree requires hitting stealth-specific milestones too - headshots, sneak-kills, knife-throws, that sort of thing.

In other words, you're all set up for maximum stealth mojo from the get-go. I really dig the stealth systems in Wolf 2, but most of its levels aren't particularly built for it, often making it more a matter of grim determination than anything else. Silent Death is much more self-consciously an assassin's playground, with an abundance of vents, side-tunnels and improbably tiny gaps you can magic-squeeze your way into. One level also uses banks of theatre seats for a memorably atmospheric game of hide and seek, you crouch-walking behind the red felt as headtorch-wearing enemies roam.

It also cements my feeling that the silenced pistol - able to one-head-hit-kill all but the most heavily-armoured enemies - is the game's best weapon. Brutal, efficient, noiseless: it's a joy to use, and every other shooter Jessica carried just felt like dead weight. 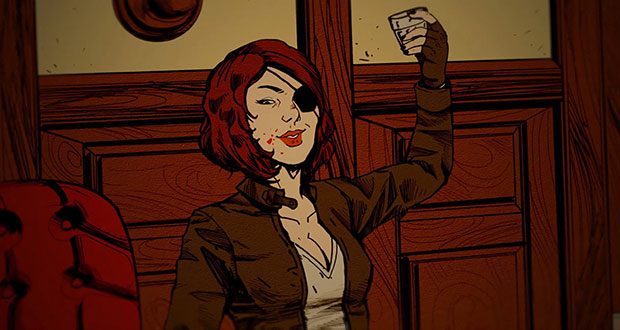 Jessica herself is almost a great character - she's after revenge for her long-ago tortured and murdered husband, then just wants to get back to drinking and toyboying her way to death in Rio, and she has an excellent line in very British swearing. "Nazi bell-end" particularly stood out.

Her smoke-deepened, acidic voice is charismatic, but the actor plays it very one-note, tackling what should be fun lines efficiently but without ever selling either Jessica's decades of pain or her gleefulness at the bloody revenge she's exacting from the aforementioned bell-ends.

And, apart from that theatre section I mentioned, the locations are far too forgettable, far too much like gentle remixes of the parent game's over-reliance on shadowy iron corridors. There's none of the plot or setpiece insanity of Wolf 2, just a pick and mix of its workaday stuff.

The third and final level involves a trip to the moon, but it's basically just a less yellow palette-swap for the disappointingly perfunctory and corridory (monstrous audition sequence aside) Venus section of the main game - not even managing to recreate the memorable mid-century sci-fi elegance of Wolf 1: The New Order's excellent lunar jaunt. You don't ever get to go outside either - best you get is a brief glimpse of white rock through an indestructible window. 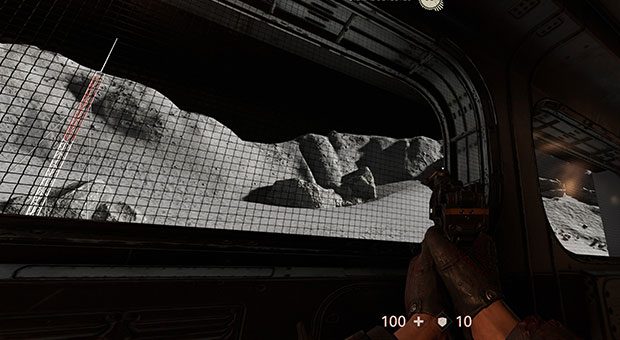 Then it's all over, 90 minutes later, without anything new having been seen or done, or the overall storyline dial having moved any further. None of the the three Freedom Chronicles have any bearing on Wolf 2's main story, or on each other - they're self-contained tales about other people in other parts of the worldwide resistance against Nazi rule. I don't object to that in principle, but it does make them feel a little bit meaningless - all you've achieved is to kill a few more Nazi generals, who seem to be pretty much infinite in number and entirely interchangeable.

Put this together with Wolf 2's ending and post-campaign circumstances, and it's pretty clear that the current vision for this series is that of ongoing resistance, Nazi rule remaining status quo, rather than actually overthrowing the regime. It makes sense from a franchise point of view, but it's hard not to wish for a bit of real closure after killing so many thousands of Reich soldiers. Especially because it's hard to shake the worry that, what with Wolf 2 not being the chart-topper it was surely expected to be last year, there are no guarantees that BJ's tale will ever be picked up again.

As for episode 1 of the Freedom Chronicles, it's perfectly likeable and capable, but moves the needle even less than 2 does. This time around, its star is Joseph Stallion, an American football quarterback who already possess BJ's optional 'Ram Shackles' ability, which enables him to charge through certain walls and knock over lighter enemies. His unlocks lie in a more overt action vein too, so essentially it's encouraging an all-guns-blazing attitude, although I found that it was a lot more suited to stealth than ep 2 was to carnage.

Joseph is a likeably earnest sort, and his tale involves some exposition about how the Nazis make their super-soldiers as well as a certain degree of parable for racial tensions in current-day America. He hasn't got quite the degree of personality or personal motivation than Jessica is given, but on the other hand his actor's monologuing is a lot more naturalistic and convincing

His levels, meanwhile, involve much more outdoor spaces than Jessica's, but in the main, they feel even more like an extension of Wolf 2's main campaign. One section, charging around with limited ammo health on a football field, stands out, while the other major setpiece is a reiteration of the panzerhound sequence in the main game. Honestly, it's the same problem again - it's all fine but familiar, and leaves my memory almost as soon as I've finished.

It would be unwise, I suspect, to expect anything different from the upcoming third chunk, starring US army Captain Gerald Wilkins on a mission to Alaska, and which seems to riff off the more outlandish, Bondy elements of the original WW2 Call of Duties. I assume that like the others, it'll be a perfectly pleasant 90 minutes of Machine Games action with no bearing on any other Wolf 2 stories, then it's all over and that's that. But maybe they'll surprise us.

Not helping matters is that the three-level Episode Zero handed out last month as a pre-order and season pass bonus turns out to not be the prologue it implies, but instead a multi-pack of levels that appear in the subsequent episodes - one level for each of the three characters. In other words, if you pre-ordered Wolf 2 then you already own 3 of the DLC's 9 levels, while if you went for the season pass expecting four episodes, the truth is you only get three. 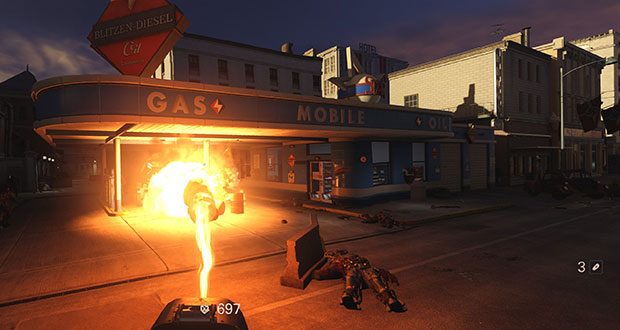 So, that's four and a half hours of new Wolfage for eighteen quid (or £24 if you buy the episodes seperately). If there were exceptional hours I'd be absolutely fine with that, but for what is almost entirely reused stuff from the main game - no new powers, weapons or enemies - I'm just not sure it's a good enough deal.

I dig Wolf 2 a lot, both its madcap-yet-serious personality and its carnage-or-stealth action, and I can't pretend I didn't enjoy a few more hours of that, but, with the exception of a handful of brief, comic-styled cutscenes and getting to hear someone say "Nazi bell-end", everything that's in here is already available from the main game. You might as well just play (or replay) its many post-campaign side missions and modes, really. I'll be delighted if episode 3 manages to change that.

Episodes 0, 1 and 2 of Wolfenstein II: The Freedom Chronicles are available now via Steam, with the third and final one due at some point in March. It's £18/$25 for the season pass, or £8/$9 per episode. Wolfenstein II: The New Colossus is required to play 'em.