For years, the people of Baltimore had to content themselves with the long, winding route through New York, Albany, Syracuse and Buffalo to get themselves to the fabled city of Pittsburgh, where steel grew on trees. But in 1834, the Baltimore & Ohio Rail Company, my company, finally had the funds to embark on an audacious project: a really big tunnel.

Broadly covering the first century of North American railway expansion, Railway Empire is a battle against geography. Huge mountain ranges and serpentine rivers ensure that flat ground is highly coveted, but if you’ve got enough cash in your bank account, then even the Alleghenies can be conquered. 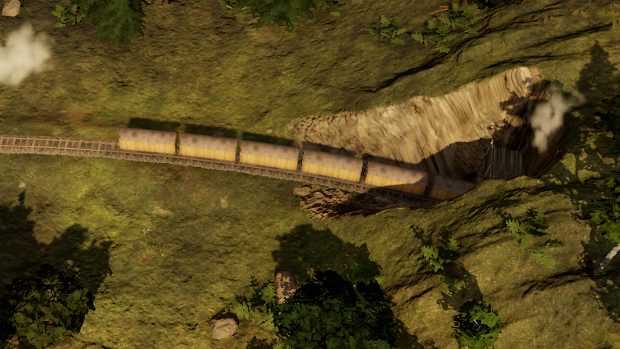 Instead of heading north through the cluttered web of routes, signals and side tracks to New York, this new line headed west, a tricky path following a meandering waterway, until it hit the mountains. Going further west means going through those mountains, but that wasn’t possible. Going over them was nearly as unlikely, as the steep incline would make it hard for even the most advanced locomotives of the era to make much headway. Hence, a tunnel.

That one tunnel cost about the same amount as my entire rail network, but with it, Baltimore and Pittsburgh had a direct link, and quickly the money started to flow. At least it did after I spent 15 minutes tweaking it, trying to reduce the incline and thus ensure the trains passing through maintained a consistent speed. Constant tweaking is the greatest weapon in the fight against dodgy terrain. 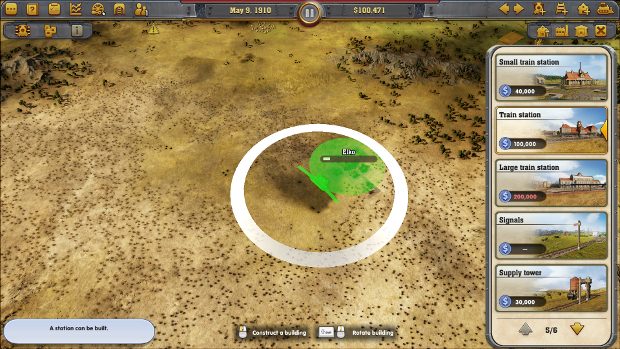 As exciting as monumental feats of engineering might be, the main objective of Railway Empire, whether you’re playing through the campaign, a scenario or one of the game’s sandbox modes, is to create the fastest, most lucrative routes, and that often means avoiding obstacles and racing to swallow up all the flat ground. Even then, though, there are plenty of logistical and engineering conundrums to solve.

The inherent complexity of creating a transport network from scratch makes beginning with the campaign a necessity. It's a series of disconnected, time-jumping scenarios but also a large five-part tutorial that digs into the sim’s many nooks and crannies. 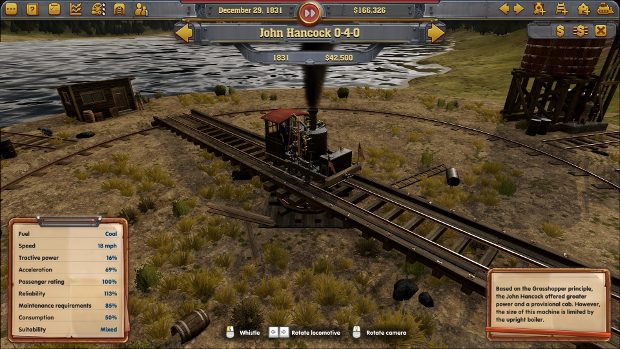 The first step on the journey to becoming a train savant is constructing stations and tracks, as well planning the actual routes trains will take. This gets complicated the moment you introduce a second train. With two trains you're faced with jams and obstructions. So you'll need parallel tracks, side tracks and signals that can create one-way systems or more elaborate connections. You might recall how well I handled this challenge in another recent  choo-choo sim, Mashinky.

I’m still rubbish at planning and building an efficient route, but Railway Empire’s track tool is forgiving, letting you lay out a blueprint of the track before committing to it. It shows the cost, the incline and any problem areas. If you click on the track associated with one station, then click on a track for another station, the tool automatically creates a railway between them. You can either approve it or tweak it by moving specific sections. 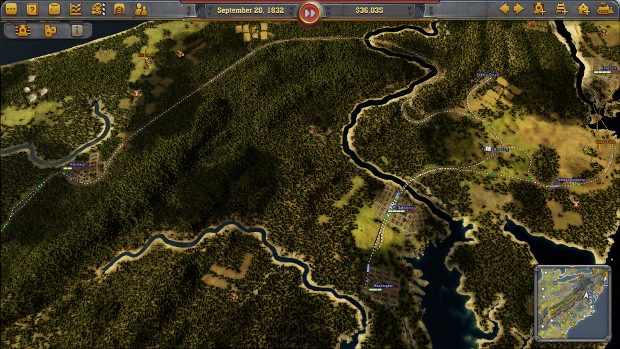 You use signals to create branching tracks, express routes, or one-way lines. This is a bit tricky, but they’re free at least, so you can make mistakes and just start again. An overlay that appears when you select signals also offers some clarity by showing the direction of the track. And finally there’s an in-game guide, complete with video demonstrations if you’re more of a visual learner.

I sped through the first mission, which eases you into things by making you the only company in the area, already pretty confident by the time I was given a checklist of tasks to prove I’d grasped it all. I was still feeling it when I fired up the next one. A couple of hours later, I was yelling at cartoon tycoons and pleading with the game as I sank into a mire of notifications, pop-ups and alerts, with music provided by the carnival of the damned. 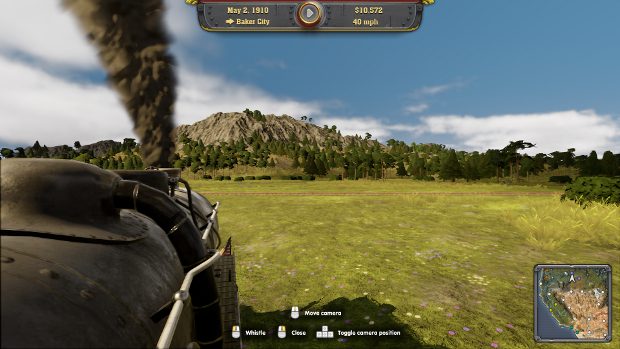 Competition ruins Railway Empire. In the campaign, scenarios and free mode, other train tycoons make their own networks, buying up businesses and laying down track, but they’re not playing Railway Empire. At least, not the version you’re playing.

In free mode or sandbox mode, you can choose to excise a lot of the game’s complexity by changing the rules about how tracks work. The standard, realistic rules make it so only a single train can use a track at one time, but the easier version let’s you lay down a single track for your entire fleet of trains. The AI only ever plays by those rules, even when you can’t or choose not to. This means you’ll be painstakingly plotting out an elaborate web of passenger and freight routes, obsessing over tiny details and making increasingly convoluted spaghetti junctions so that just one more train can reach Baltimore with the cloth its naked people so desperately need, but the AI… isn’t. 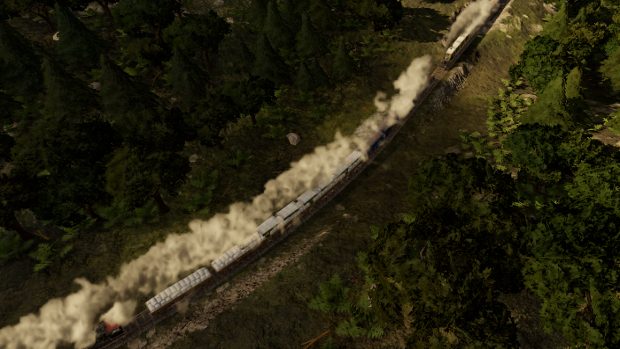 By the time I’d put 15 trains to work in my first mission with competitors, one of my opponents already had 100. The AI’s transport network was about a quarter of the size of mine, and it wasn’t doing a good job of expanding or creating manufacturing chains, but it was rolling in cash simply because there were never any delays or stops, while every single passenger or bit of freight got where it needed to go almost instantly.

It neuters the very sense of competition that these adversaries exist to promote. The AI’s not particularly competent (and that goes for train AI too, so expect your own locomotives to do stupid things like ignore free bits of track or begin a route on a jam-packed track instead of the completely empty one), but it doesn’t need to be. It reduces Railway Empire to who can churn out the most trains, which will never, ever be you if you’re playing with realistic rules. And in the campaign, you always will be. 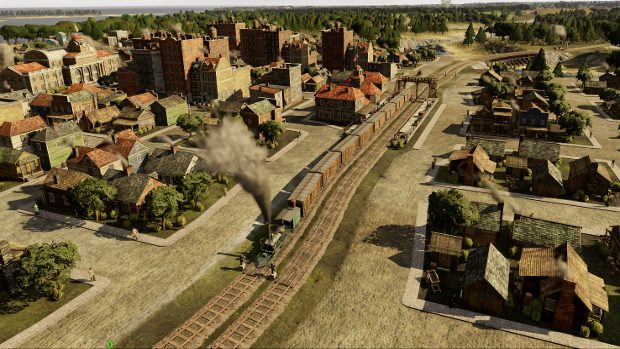 Since crapping out 100 trains isn’t likely, the only way to actually deal with other tycoons is by sprinting, full pelt, all the time. No rests. In the time it takes them to connect two stations, you need to connect five. No, make it 10. Are they building a new station in a town? Do the same. Steal their passengers, fill towns with cargo before they can arrive, harass them at every turn. Sabotage their businesses, bribe reporters, pinch their employees, tank their stock price.

I realise now that I’ve just listed a hell of a lot of systems that, out of context, sound pretty damn good. And they are, really. Railway Empire facilitates a lot of greasy, underhanded tricks, and there’s nothing like starting the day by reading a scathing newspaper report about a competitor. But it’s also full of convenient, less ethically questionable features like the ability to outbid competitors for tech at auction instead of using up research points. You can effectively run towns and businesses, too, not just connect them to each other. So you can buy up ranches and mines and start erecting universities and monuments, stopping other tycoons from doing the same. There’s no time to enjoy any of it. 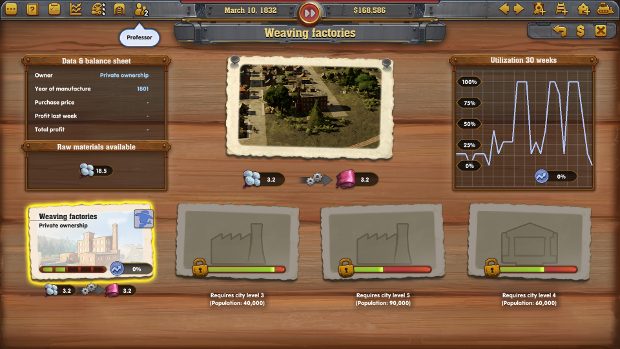 All it takes is 10 minutes of faffing around for the AI to catch up. Selecting the option that lets you pause reduces your score -- yes, pausing is considered a luxury -- but there’s another mode that pauses the game during construction as well, so there’s some room to catch your breath. But when time starts again, it’s back to that breakneck pace.

As the networks get bigger and the competition becomes bolder, that’s when Railway Empire starts to come apart. In addition to spamming trains, the AI starts sabotaging non-stop as well, along with all the other dirty tricks it has access too, because it effectively has a bottomless money pit. Worse, they constantly boast about their schemes, or pop up just to insult you, adding to the headache-inducing cacophony of chiming notifications and the rambling musings from your mentor. And then there’s all the visual clutter: auction and newspaper popups, alerts, tutorial bubbles that appear by their hundreds even when you’ve been playing the game for 10 hours. 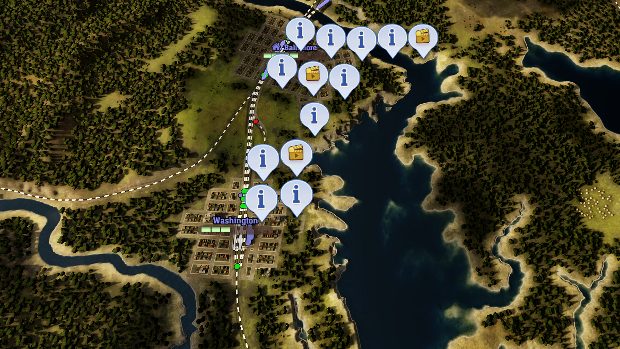 It becomes extremely hard to focus when faced with this onslaught. The pace alone is exhausting without the constant prodding. It’s like trying to hit an impending deadline with a toddler poking you in the face. Unless you want to smack your desk with your head over and over, I’d advise muting the game as early as possible.

In sandbox mode, you can only play solo, and it’s an option in free mode too, but that’s like cutting off your arm to save your hand -- you’re left with a rather conspicuous gap. Railway Empire is an adversarial game, and when you remove that, you’re sacrificing the stock trading, bidding wars and all the sneakiness. It’s less stressful, sure, and it’s certainly a better setup for learning how to play, but the loss of that dynamism leads of a duller game. 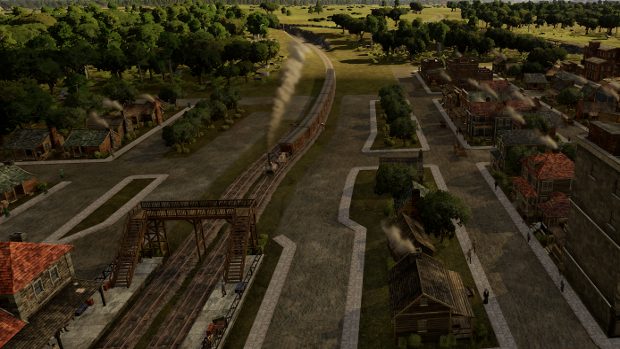 Railway Empire should be so much better. There are some extra track types and junctions that I’d like to see, but it’s still one of the best when it comes to the actual creation of a railway line. And on the economic side of things, it boasts a huge list of resources and manufactured items, reactive cities that change their needs as they grow and buy goods. And, of course, there's the stock market shadiness. On paper it’s my dream railway sim. The reality is considerably more disappointing.