I’ve been wondering for a while what kinds of games kids who grew up playing Minecraft and Roblox would go on to make for themselves. This is a generation that’s been immersed in modding culture and open objectives since it could grasp a mouse, and I’m fascinated to see how that might have formed new attitudes to games in general.

One particular answer is Unturned [official site], a free-to-play Day-Glo take on DayZ. Made by a Canadian school student, it’s just come out of Early Access, where it attracted nearly 25 million players. But was that simply because it’s free, or is there more to uncover in Unturned? Here’s wot I think.

Also, I’m trying to say that you shouldn’t take Unturned’s looks at face value. Unturned is brutal, deep and detailed. There is an enormous amount to do and deal with when you play, a natural product of Unturned’s nature as a survival game. It is, after all, directly inspired by DayZ, and has grown up right alongside the likes of Rust. It’s been around for about as long as Rust, having first launched in Early Access in July 2014, and developer Nelson Sexton has constantly added new features to it ever since. 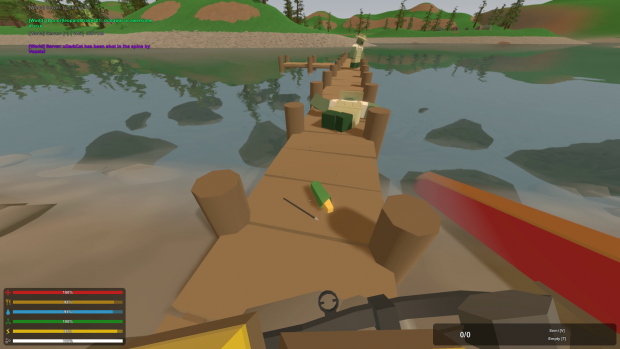 Not one of them is original. From DayZ come streets and camps haunted by zombies, loot to help you survive and the need to manage hunger and thirst stats, not to mention the social aspect of sharing the world with other players who may want to help or kill you. Also from DayZ are bullet drop, crafting, body damage hit zones, drivable vehicles, item durability, and susceptibility to sickness. From Rust, meanwhile, comes base building and starting each spawn naked (well, genital-less, and only if you’re not wearing cosmetic clothes) and XP and levelling (a system which Rust dumped at the end of last year).

So the loop of spawning, carefully looting to find gear and supplies, gathering XP from kills, chopping down trees and other activities, and building a base to keep you and your stuff safe, is all here, and it’s well implemented. Compared to DayZ, Unturned turns up the gear drops a fair bit, so you’re more likely to find good guns and useful stuff quickly. Still, it’s vital to know the maps if you want to do well, understanding where the zombie populations are dense and sparse, knowing where the most useful gear, such as night-vision goggles, tends to spawn. It’s also a good idea to learn how to build your base in such a way that players can’t easily steal your stuff. 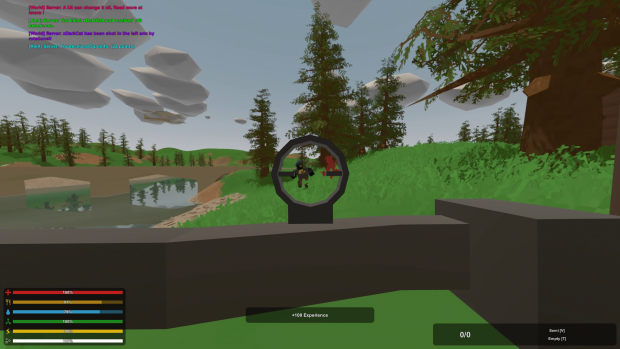 Gear is focused and has clearly defined uses. Clothes reduce damage to parts of your body, but they’re most valuable for the inventory space they grant. If you can survive more than 20 minutes or so, you’ll find even the pockets of your Firefighter Bottom, Fishing Top and Dufflebag bursting, with no space for the fishing rod and flashlight you just found. And yet fishing is a good source of food and the darkness and length of the night makes flashlights a necessity, so you’re always having to make choices over what to grab and leave behind, while always watching your back.

And it’s fine that Unturned isn’t very original! It’s a remake of a Roblox remake of DayZ, and anyway, Unturned is still very distinct. Those chunky, childish looks are the tentpole for a playful wink at the genre’s traditional grit and grossness. For one thing, it’s the only game I’m aware of that’s ever featured a level set on Prince Edward Island. PEI was for a long time Unturned’s only official map, but it’s now the smallest of a stable of maps that encompass Washington State, the Yukon, Hawaii, Germany, and Russia. 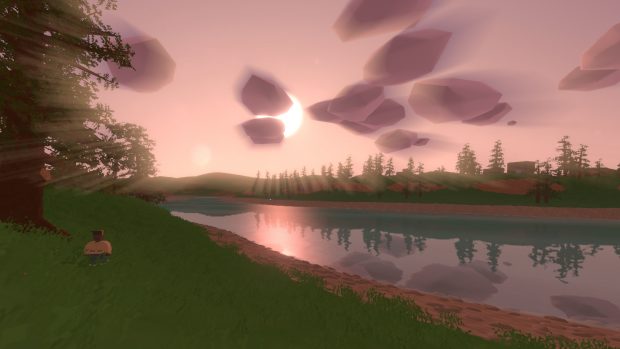 In PEI by day, the sun always shines in a blue sky set with white clouds that look like PlayDoh. Birds sing, the grass is green. Trees gently sway. While DayZ’s quiet and sense of solitude was always slightly threatening, walking through many of Unturned levels is almost bucolic. Every time I spawn on a PEI beach, I’m struck by how much it feels like - what the hell - Proteus?

Not that it’s high-minded, obviously. When you hit a zombie, blood splatters against every nearby surface so brightly that it looks like you had a cheery paint fight. The combat itself is functional. Guns don’t have the sense of pinpoint Arma-precision that underscores DayZ, and without all the smoke and particle effects that accompany most realism-based games they can feel a little weedy. It’s also often difficult to get a sense of where you’re hitting, despite bodies having hit regions. But there’s plenty of feedback with all the blood flying and ragdolls sent cartwheeling. 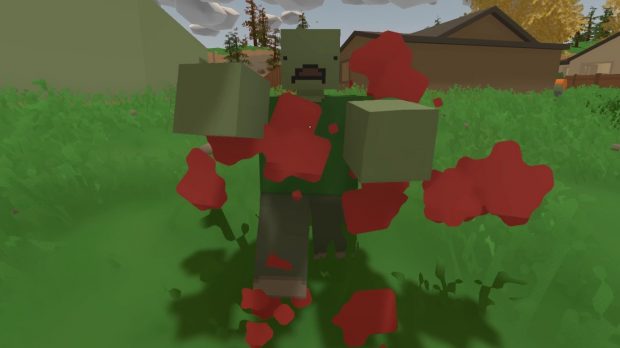 Melee weapons can also feel indistinct, partly because it’s difficult to gauge distances in Unturned. I often found myself flailing at mid-air, a frustration when it takes a shade longer than you’d like before most melee weapons are ready to strike again. There’s little strategy to melee, too, and most fights against zombies are a case of running backwards, repeatedly slowing to let the zombie into range, hitting them, and using the moment for which they're stunned to make them trail behind again. Melee, therefore, is best practised when you’re in full control, preferably having sneaked up and using a heavy attack.

While every level depicts the aftermath of a zombie apocalypse, Unturned’s Robloxian 3D art style makes it fun. And yes, it is an art style. Once on its wavelength I realised how consistently it’s applied, and how much character Unturned extracts from polygonal assemblages of boxes and cylinders in primary colours. There’s a destroyed military convoy on one of the roads in Washington, with crashed jeeps, wandering zombie soldiers and good loot, and being rendered in fat shaded polygons makes it a friendly sight. 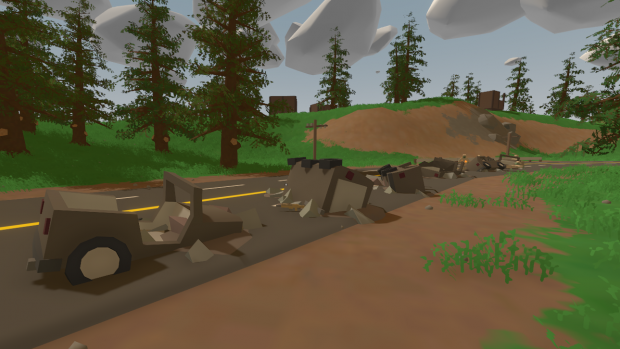 Maybe because in such a low-detail world everything tends to stand out, but every piece of scenery calls out a little story, supported by notes found here and there, and it helps the levels make some sense. But then again, on the Germany map there’s a zombie Kaiser boss to defeat in the castle, if you can gather together three components for the teleport that gets you inside. There are secrets to be found behind waterfalls, large-scale scenes such as space shuttles, and NPCs to trade with and do quests for. Exploration rewards with fun surprises as well as good loot.

Unturned is also far more refined than it looks. It’s deeply moddable, most objects can be destroyed and it’s pretty bug-free, in my experience. But there are rough edges. Aesthetically, some of the graphical effects, such as sunshafts, are ugly as heck. In practical terms, its sound lacks the nuance to help you figure out how far that gunshot is away or whether to run at that zombie groan, because everything sounds like it’s RIGHT NEXT TO YOU.

I also really don’t like how long and dark the nights are. As a terrible player with an average life expectancy of about 10 minutes, I find it tough to assemble essential gear (bedroll to establish a respawn point, flashlight, weapon to deal with zombies), night is a dead time that I find myself having to wait out. The crafting interface is a bit of a mess, inventory management is more of a pain than it should be. Flanker zombies, which move fast and are invisible, are bastards and I hate them. 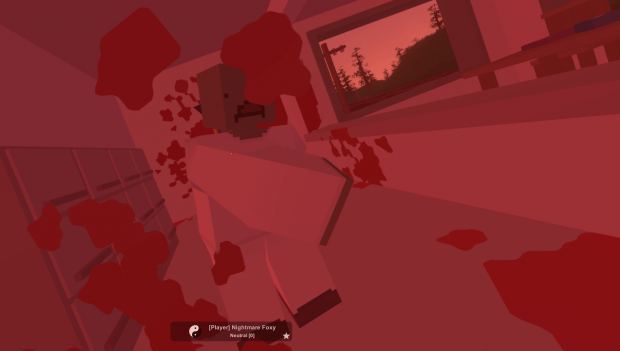 And then there’s the general attitude of other players. This is a game played by kids, and that seems to mean that everyone is out to kill everyone else. Sure, that led to some great tense times, such as when in the Seattle area on the Washington map I found someone had barricaded themselves into the top of a tall crane and was sniping across the entire city. I sneaked through zombie-infested back alleys and into an office building and managed to take them out after a long, long-range battle.

But in almost every encounter I missed the ghost of the early-DayZ frisson of will they, won’t they? The only times in Unturned when the only option wasn’t to pull the trigger first was when I spawned next to another fresh respawn and we both knew we had no weapons or anything to steal (and even then I got punched to death a couple of times).

Perhaps that’s just because of the servers I played on, but I suspect it’s more to do with, to a lesser degree, attitudes set by its breezy style, and, more importantly, its price. 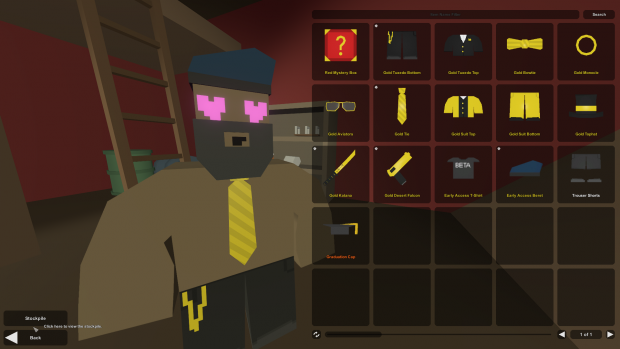 So, yeah, let’s talk about free. You can play Unturned for absolutely nothing and have a good time and see everything. But if you pay £3.99 (US$4.99) for the Permanent Gold Upgrade, you get various gaudy cosmetic things for your character, including gold trousers and greater beard choice, and extra character slots. But the main attraction is probably is access to premium ‘Golden’ servers, which are just a little less Wild West-y, and grant bigger XP rewards so you level faster.

That’s a great price for a large and still-growing game. Unturned is stuffed full of features and details, and it all works very well. It’s a good game, and it’s bursting with value. But it often feels that it’s a game that’s looking at value first, trying to be everything to everyone, instead of creating its own niche. It’s cartoon fun and hardcore survival all at once, and that means it doesn’t have something like the single-minded brutal weirdness of Rust, or the hardcore realism of DayZ. With the choice between all these games, Unturned feels to me just too breezy and hard to justify investing myself in.

And, you know, like so much about Unturned, that’s fine! Most of its players don’t have that choice, whether because of money or age restrictions. And for a first commercial game by a developer who was 16 when he launched it into Early Access, and has constantly honed it ever since, Unturned is an extraordinary achievement. I guess what I’m wondering now is what, armed with all this experience and skill, Nelson Sexton will do next.

Unturned is out now for Windows, Mac and Linux via Steam and is play-for-free.