When Wuppo [official site] begins you are gigantic and barely able to run. That is because your lazy character loved watching television so much that he ate one. As you progress, you learn to run and jump and fight, but most importantly you learn to help the people around you rather than being a jerk. Like Undertale and Chulip, this is a game about good citizenship.

It's a game full of those playful “they thought of that?” touches that make Deus Ex or Paper Mario titles rewarding. You have controls for movement, an action button that does whatever you need in a given context, and a dedicated button for whistling, which is never necessary yet often rewarding. Your nameless character's health meter is justified as “happiness” - when you make a friend, or watch a new filmstrip, or eat your favorite food, your maximum health increases. For all the Kirby-as-designed-by-Dr. Seuss trappings of the setting, Wuppo takes the idea of self-improvement sincerely.

And your character has a long way to go – he's introduced mid-prank-phone-call to Carlo, the manager of the hotel where he lives. It seems he does this all the time. And now he is you, and you're a jerk of such titanic proportions that after you drip ice cream all over Carlo's spotless hotel, he throws you out the window, into a jungle with no way home. The beginning of Wuppo, orienting the player to the game, primes you for a collect-the-blue-gun-to-break-blue-blocks Metroidvania, but it's something altogether different.

Take that TV you ate. Your first Chozo Statue caliber upgrade comes when someone robs you and steals the TV out of your mouth, making you smaller and more nimble. But the game is still basic at that point - you collect items, jump over pits, fight bosses, and make your way through a labyrinth to find your way home. 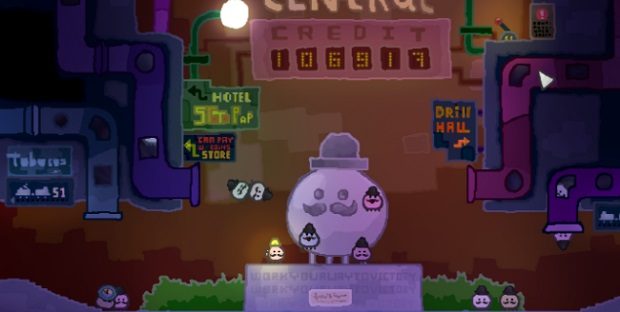 Then you get back to the hotel, and after all your travails the manager... has given away your old room and banned you for life. This is where the game opens up into its real shape – your only direction is to find or buy an expensive train ticket to the big city. As you explore the hotel and befriend its inhabitants, you help people out. You clean rooms, you stop a bloodthirsty dessert, and you make friends. You can even get Carlo to admit he'll miss you a little. You grow as a person, essentially.

A nearby theme park, Wondersplenk, is nothing but side content and gags – you never need to go there. But there is a lot to do, including side-quests and minigames and roller coasters that give you a happiness bonus. 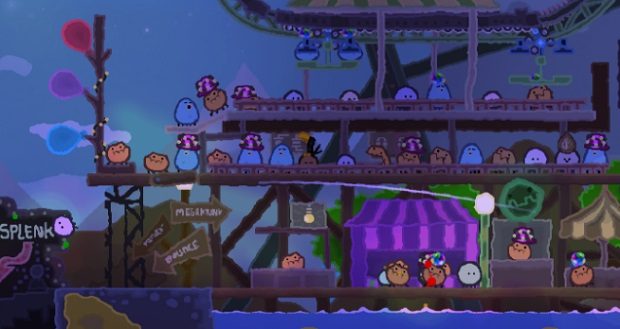 The roller coasters aren't themselves anything special, but in a move at once mind-numbing and mind-blowing, you have to queue up to get on them and get that happiness/health upgrade. Thankfully, there are only a few times in the game you have to do something like that. But it condenses everything else in the game into one element to force the players to feel empathy: these little cartoon people around you are all doing their own thing. No one cares that you're the player.

That grows more apparent in the next sequence, the big city, where a valid strategy is to leave the game on and wait several hours for other characters to finish everything for you. It's not the fun way, but it's an option. This is a world where other people have feelings and goals. It's great to see that in a game about a jerk learning to live with others.