As predicted, I spent most of the weekend playing XCOM 2: War of the Chosen [official site]. It's good to be back, fighting against the faux-benevolent burger-making overlords of future Earth, but I haven't actually made a great deal of progress in my new campaign. That's because there have been several new campaigns, and that's because I'm an idiot who can't resist the lure of an Ironman mode, while secretly hating the reality of an Ironman mode.

There must be others like me. I suspect, in fact, that many of you are like me. Death and its consequences feel integral to the very nature of XCOM (and X-COM). My strongest memories of the original game, back in the nineties, all focus on the heroic deaths of my favourite soldiers. Firaxis' XCOM games have gradually made characters less disposable, thanks to their specialisations making them integral to success and marking them out more strongly as individuals, but it just isn't XCOM if nobody dies from time to time.

And, to my mind, it certainly isn't XCOM if I can reload after a crappy mission or a stupid decision and magically resurrect the soldier who caught a stray stream of super-heated air right in the neck, or bring an entire squad back to life if I sent them too willingly and carelessly into a Muton meatgrinder.

And that's why Ironman mode is the only way I play.

And that's why I've restarted the War of the Chosen campaign three times in two days. 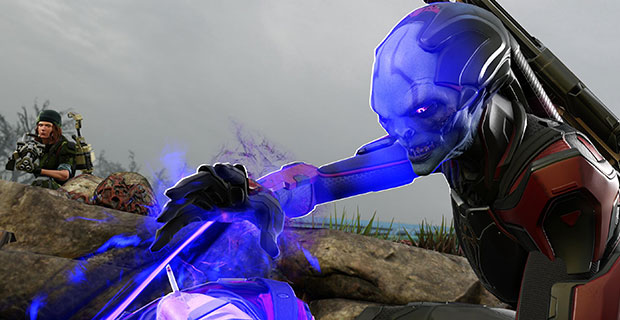 I tell myself that throwing the towel in after a few in-game months and starting over is somehow more noble than simply restarting a botched mission, but really it's just a waste of my time and I'm effectively resurrecting the entire resistance movement every time I restart, so it's not as if my way of playing is somehow more honest. If I really wanted to play Ironman rules, I'd play once and then delete the game when I inevitably failed.

The good news is that War of the Chosen respects my time. There are lots of monologued introductions and lengthy missions to introduce new concepts, but like the base game's tutorial and introductory voiceovers, they can be toggled on or off at the start of a campaign. And I don't feel like I'm repeating my previous steps because there's enough variety in mission and map types that I'm not watching my squads bleed out on the same streets every time. Sometimes they bleed out in tunnels now, or in diners, surrounded by not-zombies.

I started a new campaign this morning. It's an Ironman campaign, of course, but I've knocked the difficulty down to Veteran instead of Commander. This is despite experience telling me that I enjoy the game more on Commander difficulty, and that the price of that is probably walking back a few turns if I lose a soldier to an unlucky critical hit or miss a point-blank shot, the result of which is a chain reaction of events ending in the death of everything and everyone I've ever cared about.

The price of Ironman, for me, is restarting later rather than sooner. I don't have the endurance to pull back from a losing position in the early stages so I'm not going to tough out an entire campaign when I lose my best soldiers trying to rescue one of my worst soldiers, and I apparently don't have the willpower to resist the possibility of save-scumming if the option is available.

And that is why I am an Ironman idiot. I tell myself that all of this failure is character-building but in reality, I'm probably just ensuring that I'll never see the end of a campaign in the expansion so this is a habit I should probably break.