If you click on a link and make a purchase we may receive a small commission. Read our editorial policy.
Yakuza: Like A Dragon review
Yakuza: Like a Dragon presents a bold new RPG direction that pays off in spades. It's a great entry point, yet still an excellent adventure for long term fans.

Yakuza: Like A Dragon is a big stretch. Not in a “you’ve taken it too far, buddy” sort of way, I mean I can quite literally feel the click of Ryu Ga Gotoku Studio’s bones as they extend their arms to the sky and heave their collective sighs of satisfaction - finally, a fresh start.

They’ve taken this opportunity to strip all the best bits from Yakuza’s creaking action adventure foundations, and build something with renewed focus. If, before, the series had flirted with committing to the role-playing genre, Like A Dragon is down on one knee proposing to the JRPG with happy tears in its eyes. And this relationship works, alright. Oh yes it does.

After many, many years of cracking skulls, Kiryu Kazuma has passed the protagonist baton to Yakuza’s new kid on the block Ichiban Kasuga. He's a low ranking yakuza with boundless energy and unswerving loyalty to his family patriarch. They share a close bond, or so Ichiban thinks - until he’s left for dead in a confusing act of betrayal. It’s a compelling setup, and it leads to Ichiban tumbling out of a trash can in the heart of Yokohama.

Of course, Ichiban is devastated, but he doesn’t nurse any bitterness or throw out seething vows of vengeance like a certain Kiryu would. Instead, he bounces into action, and his playful personality quickly nets him allies in an otherwise alien city, a ragtag crew who join him in his pursuit of answers.

It’s refreshing to play as someone who isn’t afraid to let his emotions run away with him, and Ichiban's knee-slapping laughs and cheeky rebuttals make him rather loveable. There’s also a childish naivety to his determination, in both the way he plunges himself into Japan’s criminal underworld without hesitation, and his belief that maybe - just maybe - his boss will take him back. 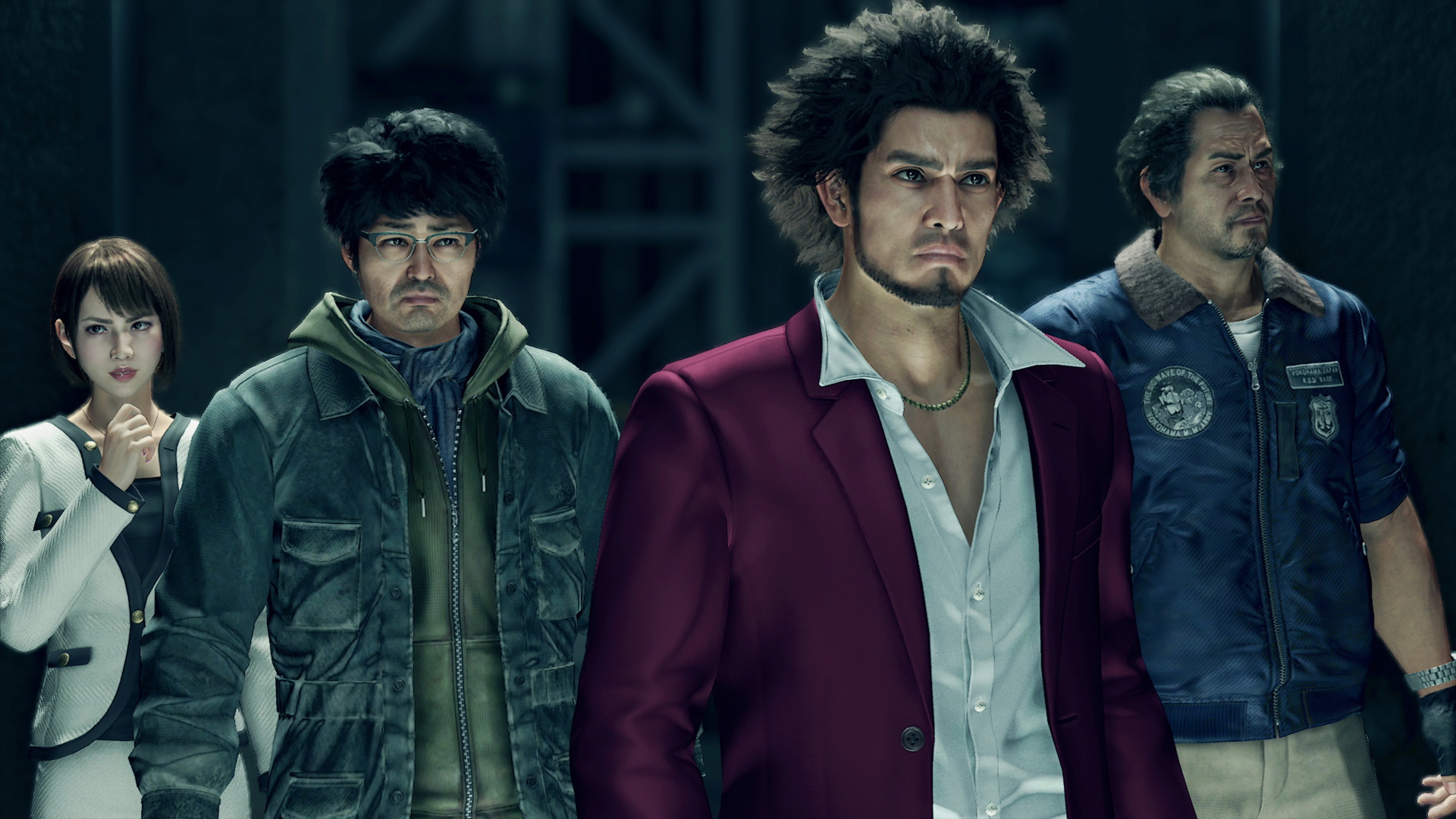 It's also evident in Ichiban’s dream of becoming a hero, a force for good like the character from his favourite game Dragon Quest. Ichiban's imagination colours his perception of the world, as if he’s playing an RPG in real life; it's a clever setup that plays into and enhances the game’s new direction.

Like A Dragon makes Yakuza's combat feel more impactful than ever.

I’m a big fan of Ichiban's new RPG-esque party members, too: You’ve got Adachi, a burly ex-detective with a penchant for massage parlours and a baton he’s keen to swing; Nanba, a former nurse who calls in crowstorms (lit. a storm of crows) by scattering beans at an enemy’s feet; and finally Saeko, a formidable hostess club manager who’ll batter you over the head with her handbag if you don’t back off.

They’re not just present to fill space. Each has their own murky backstory to uncover and emotional walls to break down, but, crucially, they also offer different perspectives on events, or a good laugh at just when Ichiban needs it. Conversation flows effortlessly between the whole group, and props go to Sega’s localisation team for bringing them all to life so well.

Plus, it’s nice to have some backup when cocky thugs stand in your way. Like A Dragon’s combat is turn-based, but it still retains the dynamic beat ‘em up style of the previous games, and the combination means the combat feels more impactful than ever. 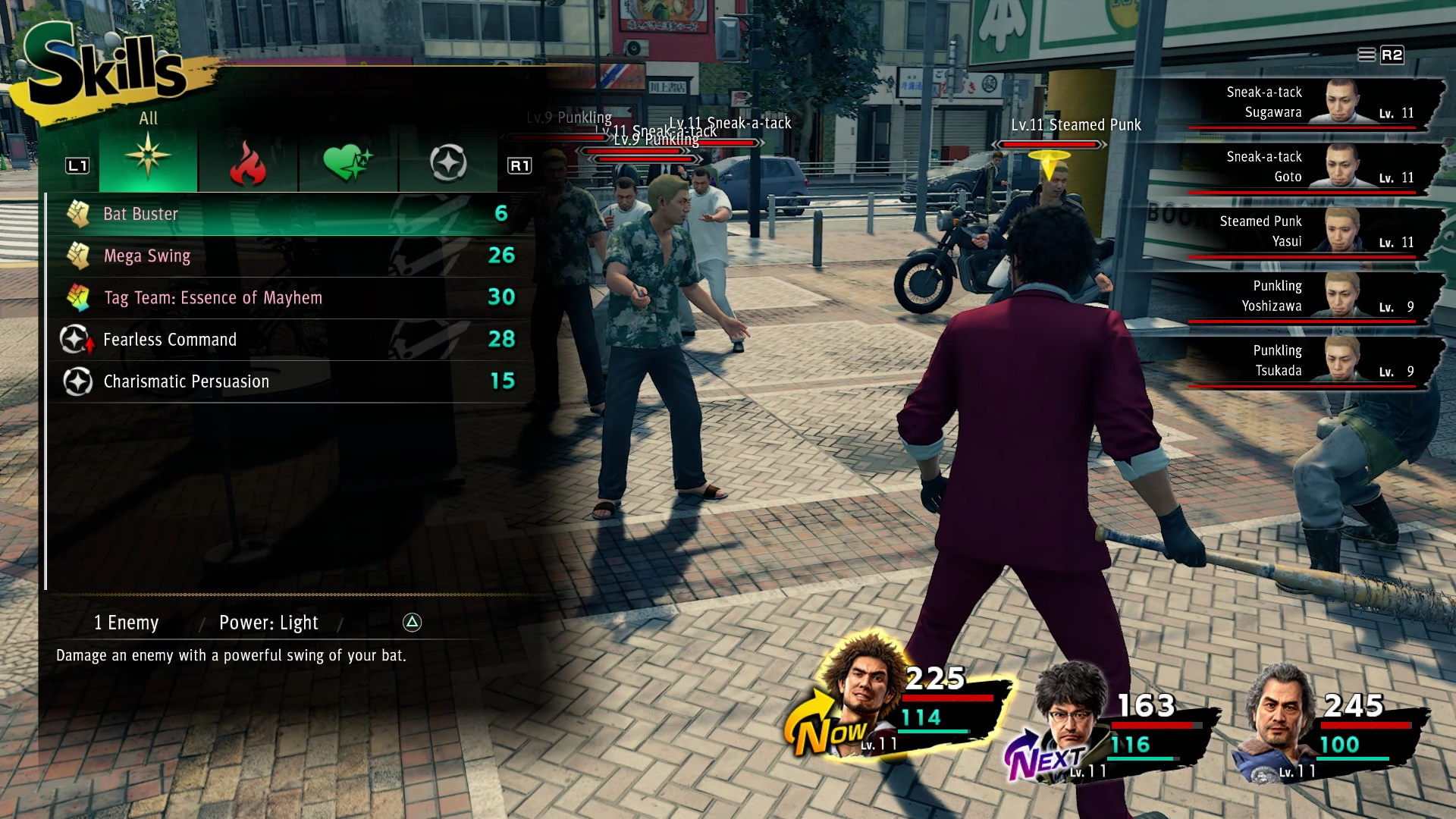 Time doesn’t freeze between turns, so you’ve got to think on your feet. What's the best use of your time? Blocking an incoming attack with perfectly timed key presses, crunching your club into a downed enemy for extra damage, or taking a moment to chow on a pork bento to heal up? I found it a little jarring that I couldn’t control the movement of all my party members in battle - but then again, it does give fights a messiness that’s reminiscent of a true scrap on the streets, so I’m not massively hung up on it.

You really do pick a fight with everyone, and everything. Half-naked city slickers literally drip with oil and spank you with lilos, while dine-and-dashers with t-shirts emblazoned with “I love rice” bop you with empty litre bottles of soda. Unhinged salarymen might get on the phone to call for backup, and many enemies draw upon moves which’ll buff themselves, or debuff your party, in an attempt to throw you off. It’s all hilarious and the variety is excellent, if not exactly difficult to overcome. 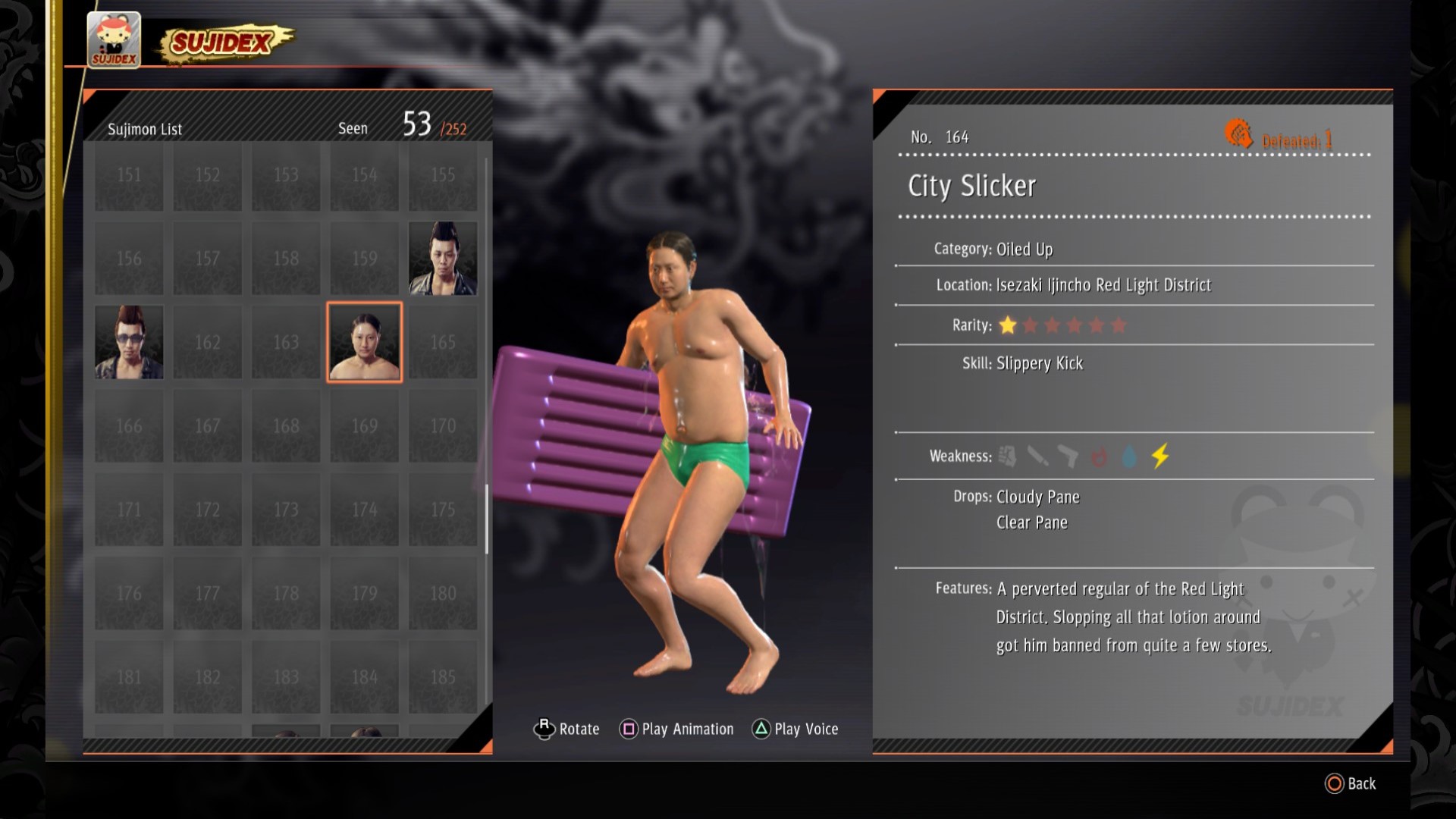 Like A Dragon’s combat isn’t a complex beast, then, but it does strike just the right balance between accessibility and giving you the tools to make each party member your own. There’s a host of jobs for them to take on, whether that’s transforming Ichiban into a Dancer or Saeko into a J-Pop Idol. Each has its own set of unique skills to use in battle and level up with XP.

And if you’d like to further bolster your squad, you can equip them with plenty of weird and wonderful items which can be found in stores, given as rewards, or stripped from the unconscious bodies of those unfortunate enough to cross you: electrically charged batons, bloodied briefs, armoured handbags - nothing is off limits. 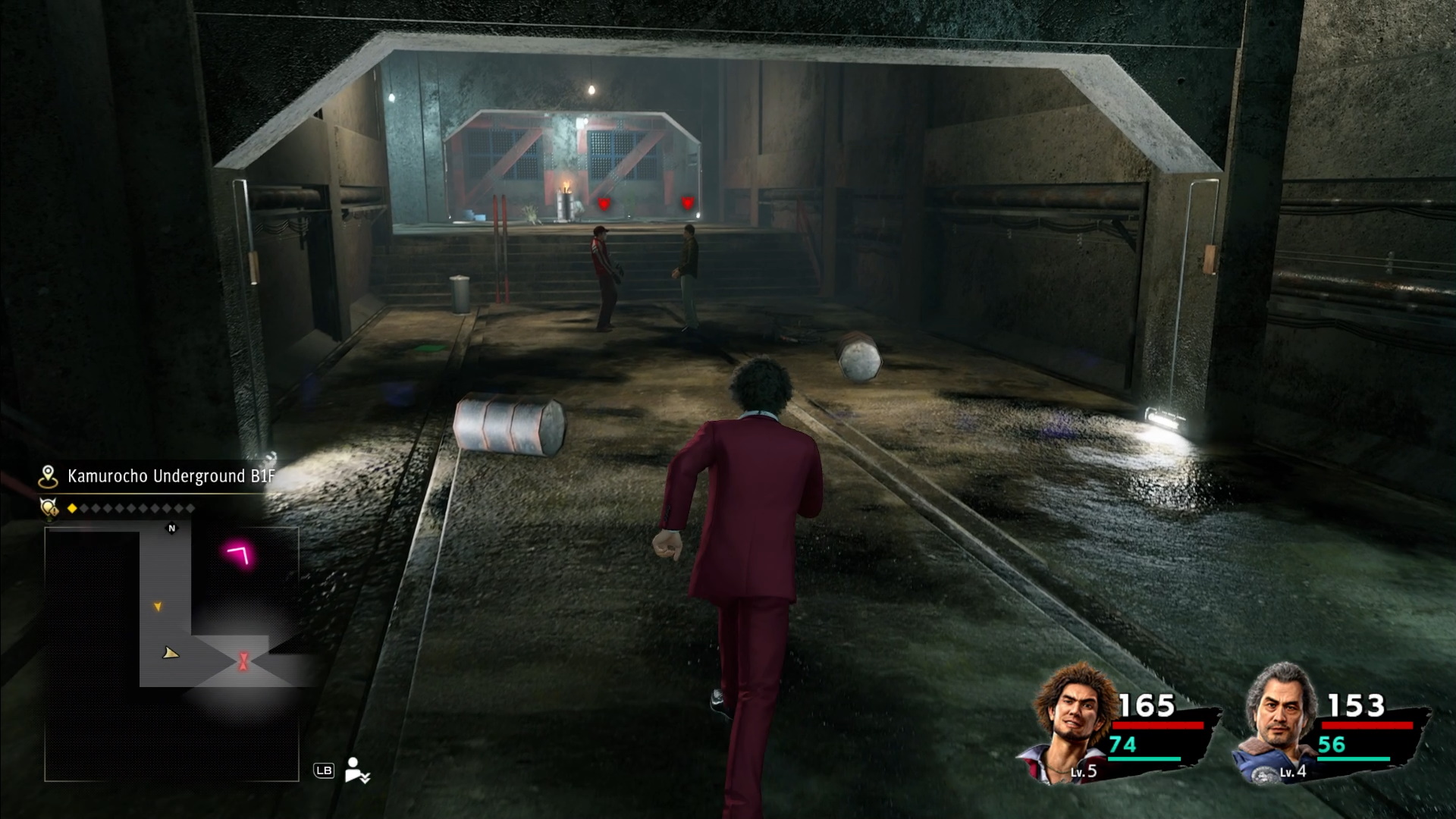 Shame about the dungeon crawling, though. Classically, Yakuza games have featured these climactic, The Raid-esque missions where you crash your way to the top of a skyscraper and mince everyone with your washboard abs and steely glare. While not perfect, these sequences moved at a roaring pace. Like A Dragon has replaced them with dungeon crawls that essentially feel like you’re a snail inching through a set of drab, cardboard corridors. They're not dreadful, but they lack the dynamism of, say, a Persona dungeon, especially when compared with the bombast and colour of the rest of Like A Dragon.

You’ll be pleased to hear that above ground, Yokohama is a delight. I have family there in real life, and hearing the city bubble with conversation as the iconic Ferris wheel peeked above the skyscrapers brought back a severe wave of nostalgia.

Not only do the streets hustle and bustle as much as your heart desires, but they’re home to restaurants with beautifully rendered food to salivate over, as well as a plethora of the expected Yakuza mini-games. Favourites like karaoke, darts, and the batting cages return, but, I couldn’t get enough of the new stuff. The competitive recycling races were a favourite, as was the vocational school which tested my appalling knowledge on, ahem, many things. And it all grants you valuable skill points to help you shape Kasuga to your liking. 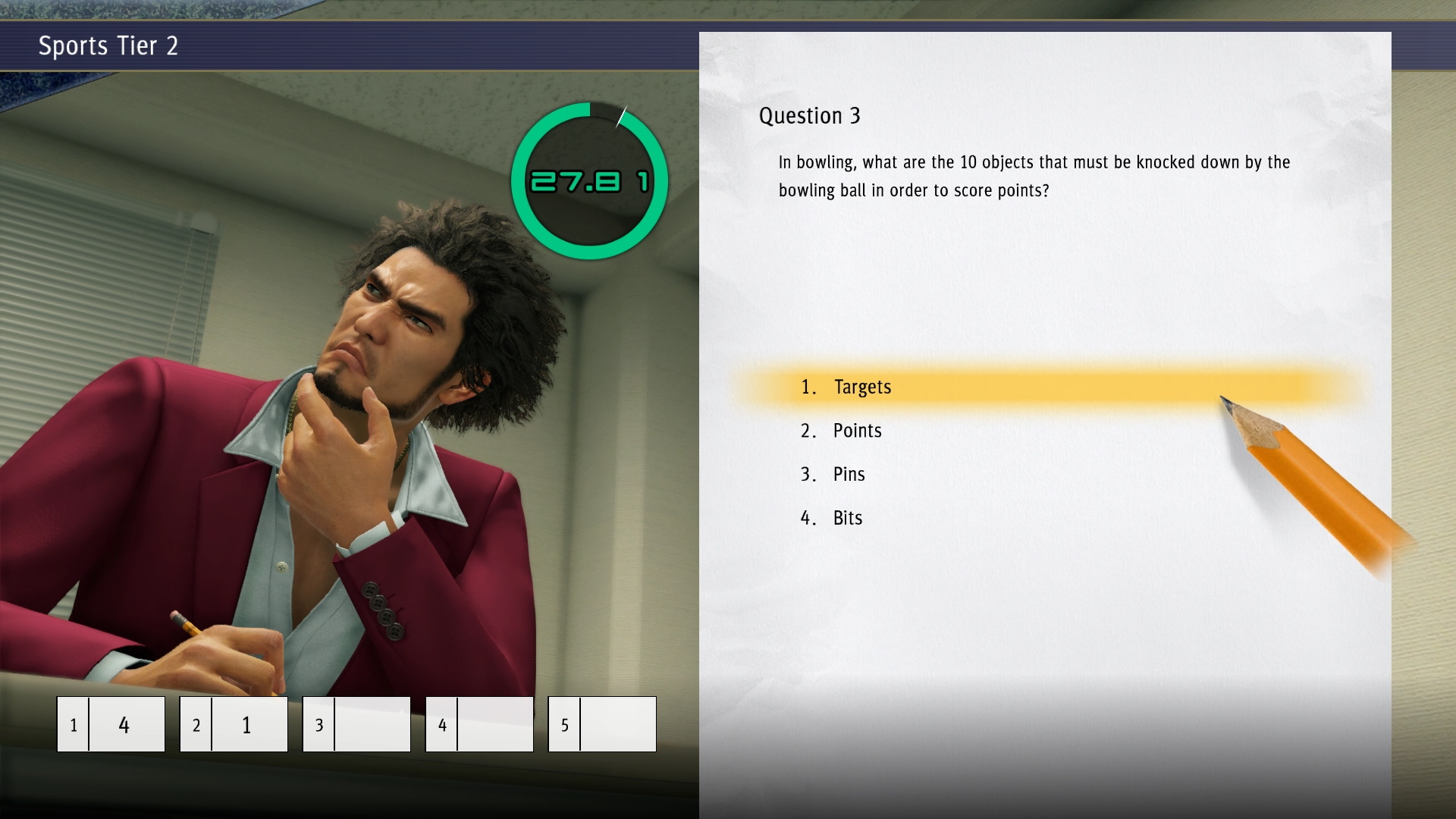 The real highlights are the sub-stories, Yakuza’s fabled side quests which see you uncovering the secret stories of the people of Yokohama. Often they’re subversive, leading you to believe someone’s a ludicrous jackass, before chinning you with their tear-jerking, tragic backstory. I fought a Piss Wizard, transformed a hoarder’s life, and drank warm baby’s milk with a diaper-clad yakuza clan (yes, the babies are back, baby).

I’ve also noticed a push to be more nuanced when telling these human stories. Where previous Yakuza games touched on issues like homelessness and sex work, Like A Dragon works harder to embed you in these environments and, importantly, be more understanding of the people in them. Early on, for example, it's revealed that Ichiban was raised by sex workers, and not long after this he stands up to a demonstration against sex work. As the protestors sling vile chants and question if anyone would be proud to be a prostitute’s child, Ichiban steps up and proclaims “I don’t mind!”. 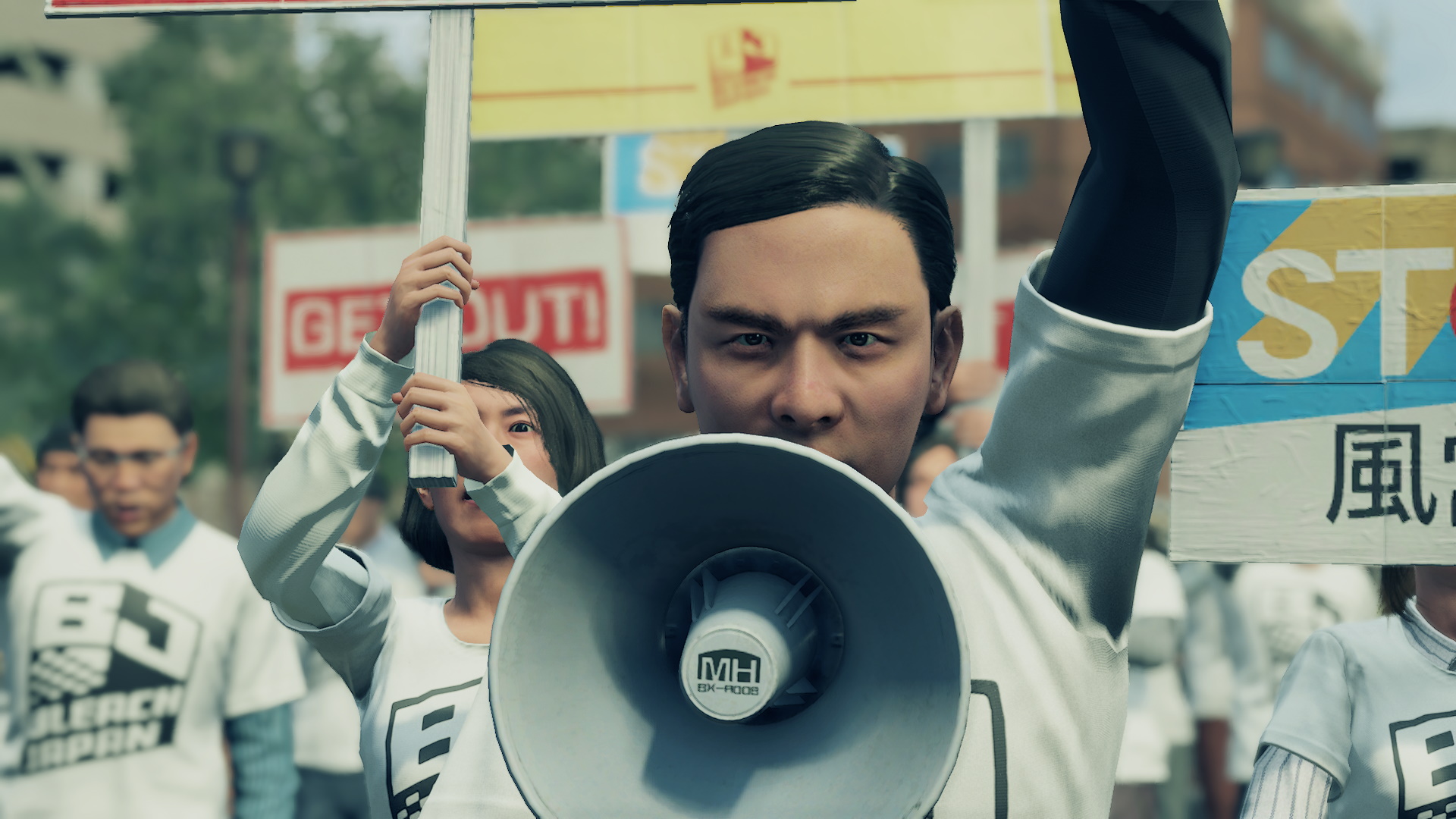 In another scene, Ichiban stands beside Nanba, looks out at the squalid conditions of a homeless camp they’ve stayed in, and questions why they don’t all just buck up and get jobs - surely it’s that simple?

Furious, Nanba explodes, “Nobody lives like this by choice. This isn’t somewhere you choose to be, it’s somewhere you end up.” Then cuts to the core of the issue, “You think we’re just too lazy to work? We all want a job and a living, man. But we can’t just erase all the things that keep us from having them!”

It’s perhaps a little basic, the way Ichiban confronts these issues, but it’s a positive step, and it's great to see him standing up, and learning from his mistakes with genuine sincerity. His aim, after all, isn’t to be just any hero, but a hero of the people.

Ryu Ga Gotoku Studio has set Yakuza on a grand new course, and Like A Dragon’s RPG switch up is sure to delight long term fans, while remaining a perfect entry point for newcomers. If it slipped under your radar, take this as me pushing Ichiban Kasuga into your room and suggesting you install he and his friends as house guests for a while. This really isn’t a game you should miss out on.