Firstly, it’s free on the Epic Store right now, and free is good. Secondly, For Honor is an axe-swinging good time for all involved, even those plummeting to their death from a comically high castle wall. It is zero pennies from today until next Friday, August 9. However, you’re only getting the base edition, so no Shaolin monks or creepy mystics for you, at least not at the start. Those are the unlockable characters. But if you scab together enough steel, the in-game currency, you can eventually muck about with those brawlers. Whether or not you get that far, you should give this brutish slice ‘em up a go. Mordhau has all the swordists in a loved-up tizzy at the minute, but I reckon For Honor is better. Let me break down why.

You can throw people into a pit

Just putting this up at the top, for the avoidance of doubt.

It has improved a heck of a lot 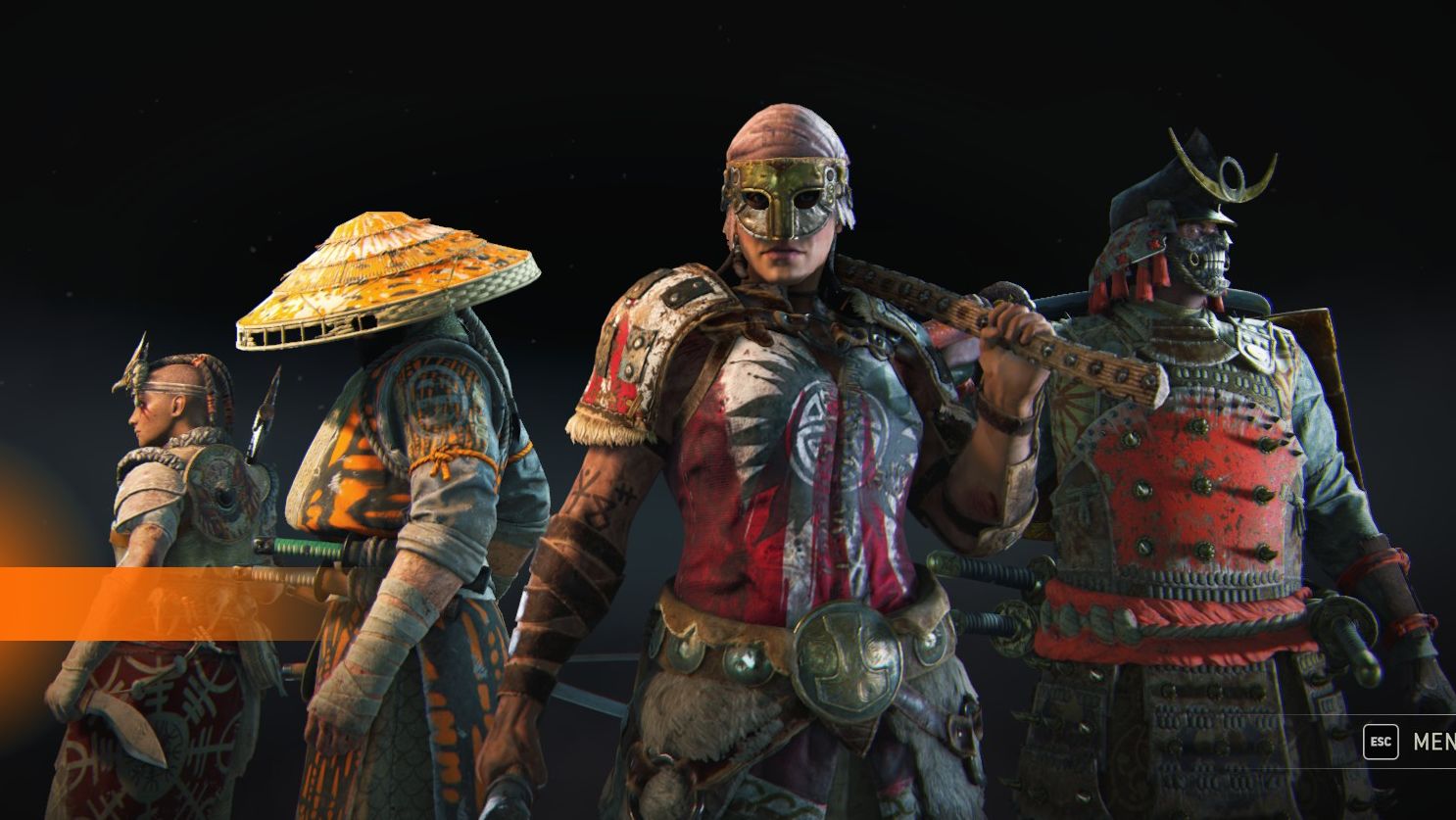 “Additions to the roster don’t feel like enough to save a game with a barrel of other flaws,” I wrote about For Honor in 2017, sitting atop a smug throne of videogame cartridges. Nearly two years later and I am a destitute buffoon, eating leftover rice from a wet box, while For Honor is the king, with a recent expansion and regular updates. It’s got new maps, modes, characters, and silly execution animations. Importantly, it now has dedicated servers, which has solved the metric fudge-tonne of connection problems it had at launch. In summary: don’t listen to past Brendan, he is an idiot. Listen to present-day Brendan. He just decapitated somebody without an ounce of lag. He is a wiser, happier murderer. This was always a good game, but now it’s at its goodest. 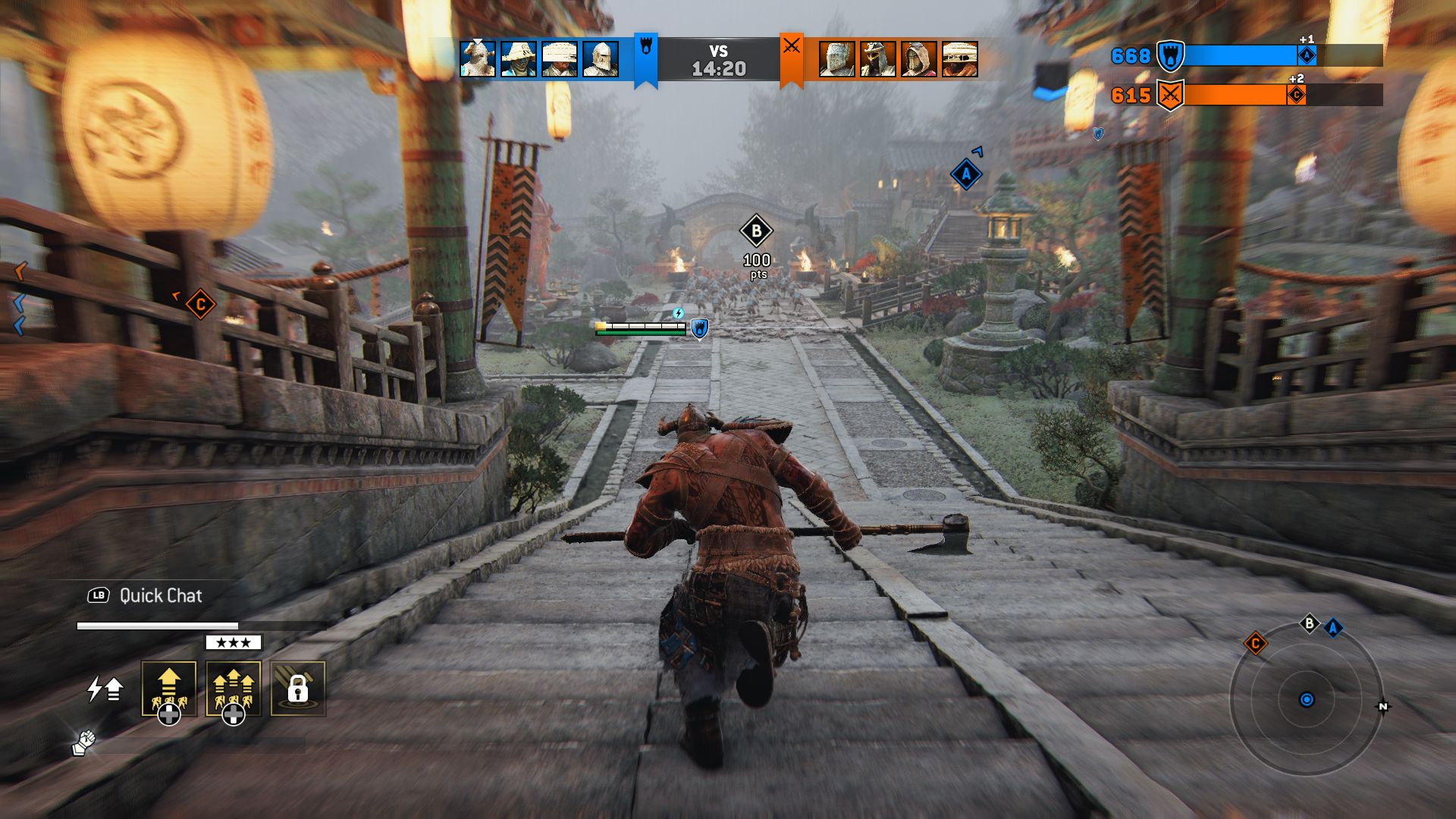 At least I think so. Mordhau has that wonderful medieval flavour. But a lot of the skill of that first-person sword swinger is too subtle for chumps like me. Millimetre wibbles of the mouse, composed swings and drags, precise twitching, contortionist dodging, all with a clean-yet-warped FOV. I can’t do it. Luckily, no such subtlety is needed in For Honor, which is (for better or worse) overrun with on-screen prompts and warnings. Red flashes show where an attack is coming from. Orange warn-o-blorps caution you about incoming unblockable attacks, so you can dodge. And little shields pop up, as if to shout “look out mate he’s grabbing you by the collar of your best smock, the brute!” You’ll still need to learn how to use your pointy metal with a bit of skill, but the game itself is helping you, and there are little training arenas to practice moves against bots. If Mordhau is a lethal baptism of fire, For Honor is a friendly communion of headbutts. Wee metaphor for the Catholics there.

It’s as tricksy as a bad snake

Bear traps, cheeky arrows, axes lobbed at the back of your head while you run away. There are a lot of ways to stun, deceive or simply blow up your foes in this game which is supposed to be about chivalric brawling champ-to-champ. One of the most basic fighters, the viking Raider, can crack an enemy in the forehead with the butt of a big axe, stunning them so much they’ll be unable to see where the next attack is coming from. Another fighter, the Nobushi, pokes you with a long spear, causing you to bleed all your life away slowly. You can also get skills to let you place traps or order devastating firebombs from an unseen trebuchet, or buff your pals as they clash with opponents.

Throw in all the environmental kills and this becomes a field of disgusting no-goodery. Bashing folk into spikes, kicking them off a ladder, heaving them over your shoulder and into a lake, shrieking like a sack of pigs. The tricksiness of Mordhau is mostly in the sword-swinging (okay yes, there is the noble art of hiding spikes in a bush). But in For Honor, the jerk moves are baked into the game, encouraged even.

It’s hard, it’s brutal, fights can be unforgiving. In the 4v4 big battle modes you will be crowded by three enemies at once and summarily chopped into many parts. But stop, take a breath, go into the duel matches. Here you will find good players, happy to teach. A lot of people mistake For Honor as an action game, or some sort of medieval Moba. There’s a bit of that, sure. But really it’s a fighting game. And the best way to learn is to get your bottom smacked over and over by players who are better. Just winning one round against the samurai assassin who killed you 12 times in a row is a good feeling. The sensation of improvement, the tendrils of skill slowly creeping into your brain and fingers. Keep it up. Failing that...

You can throw people into a pit

As an abundance of caution, I have decided to mention this twice.

That’s all I’ve got for you. It is a good fighty game. If you do pick it up, play through the daft story or training sessions first. That’ll teach you the basics and give you a bunch of shiny steel to buy stuff. Otherwise, it’s likely you will go one of two ways when you step into the murderpits. 1. You will froth at the mouth about being impaled by a gate, shut down your machine, and stamp noisily into the sea, never to return. 2. You will relish the bloodsport, upend your purse upon the keyboard, and search for that magic money card that will unlock the Chinese swordsman with the fashionable feathery hat.

I’d rather you take your time. As micro-buying goes, For Honor can still cost a fair bit. It’s comparable to the bits and bobs of Rainbow Six Siege (it’s £25 to buy the most recent expansion, for example, unlocking four characters and a new “arcade” mode). It’s also like 12 quid on Steam if you hate Epic enough to complain about free things, and would rather spend actual human cash. Whether or not you cast a shilling into Ubisoft’s megacoffers doesn’t really matter to me. I just want you to try your luck on the killpitch. I want you to feel the thrill of stabbing a man to death, then pressing the emote button to celebrate your first victory, before being summarily beheaded from behind, your rolling noggin still sporting the one thing your enemy cannot take from you: a smile.