There goes my head again. Rolling along the ground like a wet turnip. The ahistorical three-sided war of For Honor has always been a tough battleground. During a recent free weekend, it became a conflict not only between Vikings, Samurai and Knights, but between practiced veterans and absolute newcomers. I’m somewhere in between. A mediocre warrior returning to the fighting pits after a long absence, a little slower and flabbier than before. Two new heroes were also added to the game recently – the bloodthirsty Shaman and sword-happy Aramusha – but, as with previous additions to the roster, they don’t feel like enough to save a game with a barrel of other flaws, whose player numbers have dropped significantly since launch. I marched back into the decapitating grounds to try the new maps, modes and murderers, and spoke to the game’s director about its problems.

Firstly, about those player numbers. Everything we know about the number of concurrent players comes from third-party sites who hoover up Steam’s data and vomit it out in the form of a pretty graph. These are not precise, but they are helpful to give you an idea of how many people are playing. To give you an example, Githyp shows the game with just under 40,000 players at launch in February. Within a month that had dropped to 8000, and by the summer it had fallen to under 2000. Free weekends and new heroes give it a boost now and again (this week, for instance) although these numbers don’t show PC gamers who play exclusively through Uplay, Ubisoft’s own launcher. Nevertheless, they do provide a sense of the decline in sword-swingers. It would be nice to have a rounded figure from an official source, but Ubisoft aren’t about to give us one.

“I can’t give you a solid number, I’m sorry,” says Damien Kieken, game director. “What I can tell you is that we still have a lot of players in the game, that’s why we do all those things, we do all those patches… we have a solid number of players, many of them were in [on] day one, in fact before, in the closed beta. So we have a very passionate and a dedicated community.” 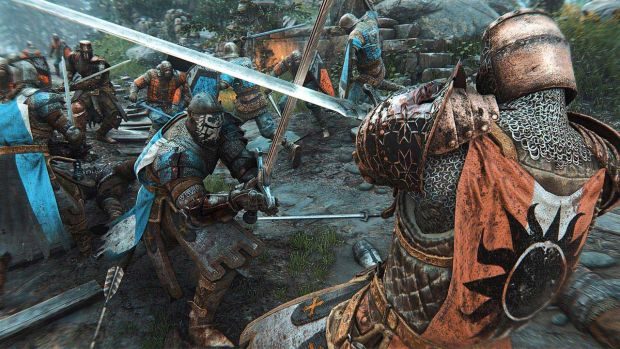 Right now, that passionate community is dedicated to chopping my head off. As the numbers have dwindled, the pool of fighters has concentrated into a fierce locker room full of killers. Out-of-practice fighters like myself are quickly cut down in the new Tribute mode. This is a kind of capture-the-flag game in which there are three flags, each of which grant damage boosts or defensive boons if taken back to your “shrines”. They are too short-lived to be much fun and the large map sizes don't feel suited to this style of battle. At one point I joined a Tribute fight that was almost over. That’s an irritation in any multiplayer game and, if it happens often enough, it suggests there’s a lot of rage-quitting or disconnections. In the case of For Honor, it has both.

“Some people have connectivity issues,” says Kieken, “this is not news and is something we’ve been working on a lot since launch.”

He’s referring to the peer-to-peer networking the game uses to connect players. The decision to use this over traditional servers caused a lot of problems, some of which have been fixed, and others which haven’t. The team working on the game has since pledged to switch to dedicated servers, but has yet to make the move. These servers aren’t planned until after the first year of updates. If he could go back, I ask Kieken, would he warn himself about using peer-to-peer? 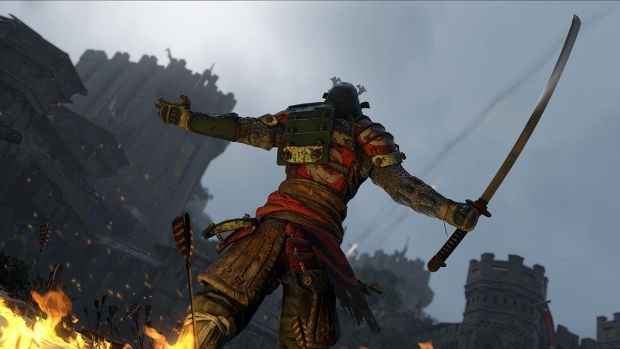 “What happened after launch is something we didn’t [see] in the closed beta period,” he says. “It was news to us… Right now peer-to-peer doesn’t bring any issue in Duel or in Brawl, its more in 4 v 4 matches. But Dominion [the 4v4 mode of conquering control points] right now is the most played game mode. It’s one of the favourites of the community so it is also the reason why dedicated servers make a lot of sense right now.

The new heroes are a good first step. Six new fighters have been added since the game’s release. Some are more complicated than others. Rich recently dismissed the elaborate-to-control Highlander in favour of the stamina-based Gladiator, who has a nasty fork and lungs like a sea lion. This time, I’m giving the Shaman a go. 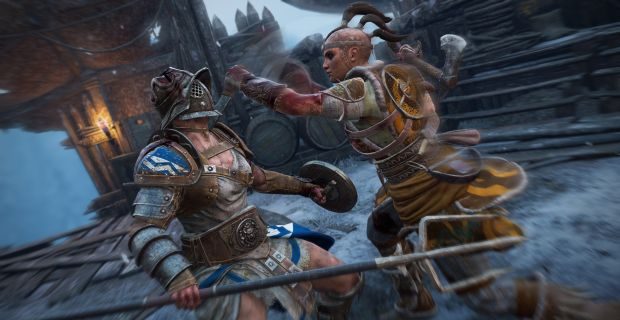 She’s a horrible pouncing prat who seeks to stab her victims with a dagger for bleed damage, at which point she’s able to leap on them and sink her teeth into their neck, taking away a tasty chunk from both body and health bar. It’s a great move, and it also recharges your own health, but it’s hard to pull off. Causing that initial bleeding wound means landing a chain of hits or deflecting a blow at the last second, then converting to the leap before your prey interrupts you. I could do the move against a bot, but in the heat of battle I was rarely able to get my delicious neck meat.

The Aramusha, for me, was much more fun. He has a twin-bladed defensive move that blocks incoming damage from all angles. You can follow this up with some heavy strikes or – my favourite – a bunched fist straight to your enemy’s nose. This leaves them stunned for a follow-up hit. This swordsman is all about feinting and counter-attacking and booting people in the belly. 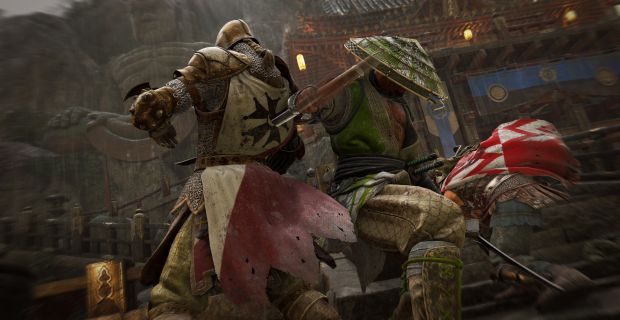 Again, it can be difficult to chain together the exact moves you desire but this is the first time I’d pick a Samurai character over a Viking one. I had a series of duels with an enemy Berserker (my usual go-to character) in which I rediscovered how good the game could be. My opponent valiantly avoided using ledges, spikes or fire to kill me (even once volunteering himself for death when he threw me off a ledge by accident) and we spent six or seven matches adapting to each other’s strikes and parries. He quickly got used to my opportunistic sprinting slash. I never got used to him feinting into a grab.

But the problems facing For Honor have never been the heroes, the complicated movesets, or even the hordes of skilled combatants. All of this has been plastered over with Ubistuff. You earn gear for your character, found in loot crates, bought with a currency called “steel”. Every match ends with an annoying splattering of XP awards and rubbish helms you’ll quickly melt down for a pittance. When the game’s audience complained and threatened to hold a boycott over the miserly rewards system, the developers responded by upping the amount of steel awarded.

“Yes we had some complaints,” admits Kieken. “It’s strange to be honest with you, it’s something I never had before. Usually when you ship a game and it’s not well-balanced, you have the feedback right away… for us it was really strange to have it like one month, one month and a half, after launch... it was an extra issue on top of the P2P issue, so it made the problem bigger than what it was.

“But then we looked at the data, et cetera, and acknowledged that, yes, there is a problem. The progression is not where we want it to be, and the steel incomes were not where we wanted [them] to be. So we patched it very quickly in one week, and since then the community is happy about it, we never had any complaints about that subject since then.” 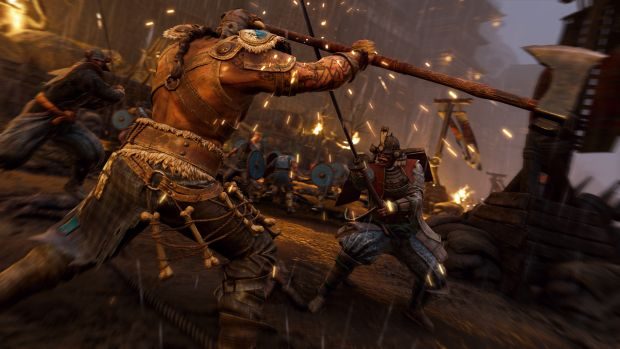 The boycott was called off. But playing now, it still feels like a treadmill. And the rate of rewards is not the real issue. The whole system is the problem. It remains a distraction, an extra unnecessary layer of game that is there for the sake of “progression” rather than for the fun of the fight. One of the best modes – Duel – doesn’t allow for stat-boosting gear at all. It makes me wish that the rest of the game was as level-headed and free of distraction. I don’t believe it would make me a better fighter (only losing my noggin a hundred more times will do that). But it would make the menu-cluttered, helmet-obsessed experience of playing neater and smoother.

Because I haven’t played since Spring, I spent a good hour or more practicing against bots just to remember all the combat’s tricksy details – the feinting, the interrupts, the counters, the deflections. Practice mode and custom matches were good for this, but they lack the customisation options present in traditional fighting games. Tekken 7, for example, lets you program a bot to repeat the same moves over and over, until you are sure you can deal with them. This made me wonder: will returning players get anything similar? To help them get back into the swing of things?

“That’s a really good question,” says Kieken, “We have different ideas within the team to smoothen the experience of the [returning] players… we’ll introduce new training experiences, new training modes and I think this will also help greatly the returners to get back into the game.” 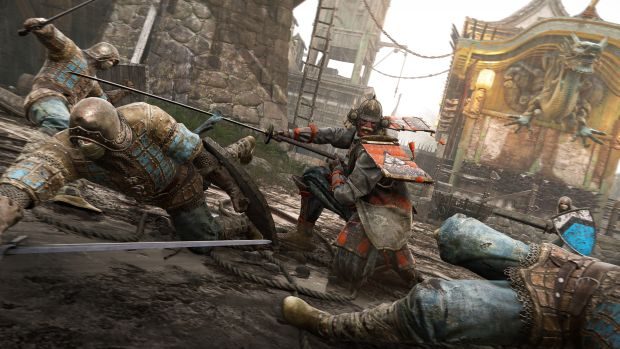 Like much of our interview, it sounds vague and non-committal. I don’t believe For Honor to be dead (it has been easy for me to find matches, but that may just be the recent influx thanks to a free weekend and the new heroes) however it would be silly to suggest that the game is healthy. Comparisons to Rainbow Six Siege are often made, a game that recovered from a low number of players to become a stable favourite among fans of bullets and flashbangs. Kieken believes that the comparison is helpful (“It shows things can change”) and For Honor has indeed improved. But not in the most important ways. Players are still waiting for dedicated servers, the progression system still gets in the way, and the trial of blood and steel that new (and returning) players need to run is neither welcoming nor encouraging.

Ubisoft show an awareness of these issues, but they've thus far been unable (or, in the case of loot boxes, unwilling) to fix them. They are baked-in. It’s a pity. The game itself and all its dishonourable scrapping – the pushing into bear traps, the tossing onto spikes – is fundamentally strong. It just has connection issues and a suit of paraphernalia weighing it down. I enjoyed my brawl with the Berserker, but when the axe came down and I was fighting for my life, I knew my Aramusha wouldn’t be enough. I'm afraid the same holds true with For Honor. Niether Aramusha, nor Shaman will be enough to stop its head from rolling.