Sony published a teardown video of their new PlayStation 5 console the other day, revealing an intriguing detail about its expandable storage options. While its internal 825GB SSD is soldered straight onto the PS5's mainboard, you'll also find there's an M.2 slot for additional SSDs underneath the main white cover. The same slot we PC folk currently have on our motherboards for connecting NVMe SSDs to it. Handy!

The video itself is a fascinating watch if you fancy staring at the innards of Sony's upcoming console while listening to the calm and soothing explanation of SIE's Yasuhiro Ootori (their vice president of the mechanical design department of Sony Interactive Entertainment's hardware design division) and the very ASMR tap-tap-click of his tiny screwdrivers - just remember to turn on the caption button so you can get those all-important subtitles.

In it, you'll see that Sony have designed the swishy white, blade-like covers of the PS5 so they can be removed at home without the need for any kind of tools. Underneath, you'll quickly spy a small grey cover above the Ultra HD 4K Blu-ray drive, which houses that all-important M.2 slot. You'll need a screwdriver to remove the cover, but once that's done it looks like you'll be able to slot those NVMe SSDs straight in without much trouble.

If you want to expand the storage of Microsoft's Xbox Series X, on the other hand, you'll have to buy a special custom 1TB expansion card from Seagate, which costs a rather eye-watering £220 / $220.

The PS5's M.2 slot has PCIe 4.0 support, too, although Sony have yet to unveil exactly which PCIe 4.0 SSDs are going to be supported by the PS5. Back in March when Sony's Mark Cerny did his (also very soothing) "Road to PS5" breakdown, he said that you'll need an SSD "that's at least as fast as ours" so that games that rely on the speed of the PS5's internal SSD still work flawlessly when they're installed on the expansion drive. 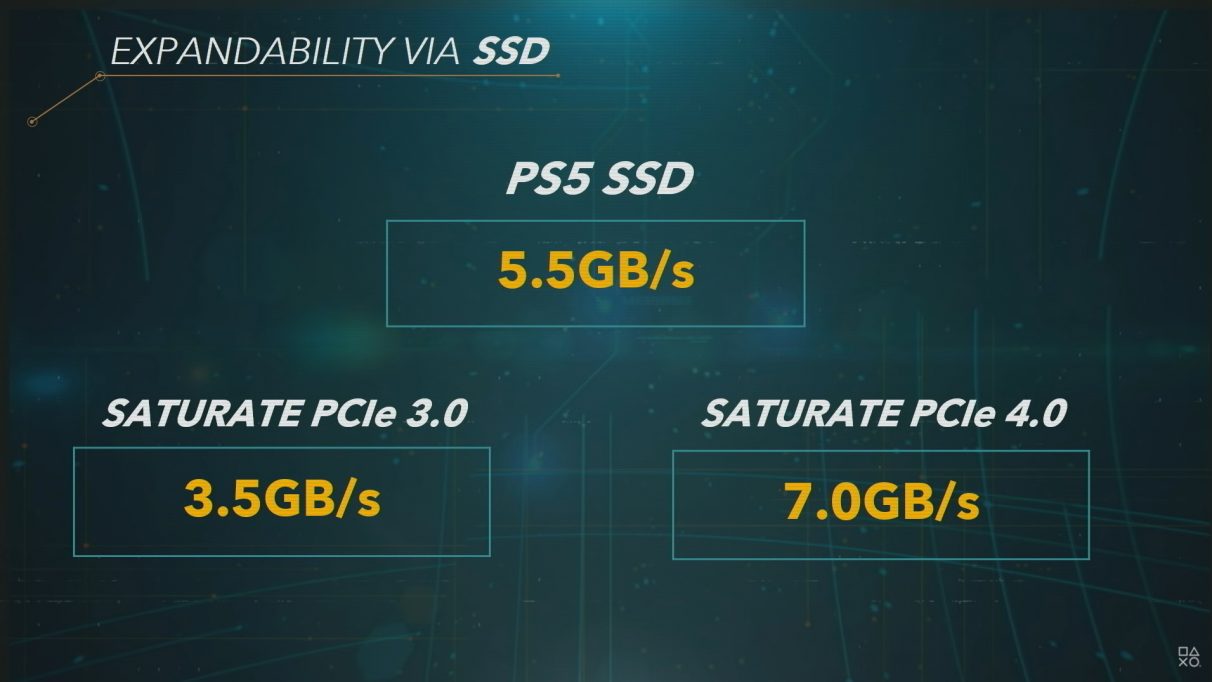 The key figure Cerny talked about here was 5.5GB/s. That's the speed of the PS5's internal SSD, and you'll need an NVMe drive that can hit that in order for it to comply with Sony's console spec. Current PCIe 3.0 NVMe SSDs often max out at 3.5GB/s, by comparison, and Cerny stated plainly that "no PCIe 3.0 drive can hit the required spec".

However, not all PCIe 4.0 SSDs are created equally, and Cerny said at the time that the samples he'd been able to test so far were only hitting around 4-5GB/s. "By year's end, I expect there will be drives that saturate 4.0 and support 7GB/s," he said.

PCIe 4.0 SSDs such as Samsung's 980 Pro, WD's Black SN850 and Gigabyte's Aorus NVMe Gen 4 SSD, however, have a maximum theoretical throughput of 7GB/s, which would appear to make them ripe candidates for the PS5. That said, Cerny also implied that simply meeting the required speed target isn't the end of the story.

"Having said that, we are comparing apples and oranges, though, because that commercial M.2 drive will have its own architecture, its own flash controller and so on. [...] That commercial M.2 drive also needs to physically fit inside the bay we created in PlayStation 5 for M.2 drives. Unlike internal hard drives, there's unfortunately no standard for the height of an M.2 drive, and some M.2 drives have giant heatsinks. In fact, some of them even have their own fans.

"Right now we're getting M.2 drive samples and benchmarking them in various ways. When games hit beta and are getting ready for the PlayStation 5 launch at year end, we'll also be doing some compatibility testing to make sure that the architecture of particular M.2 drives isn't too foreign for the games to handle. Once we've done that compatibility testing, we should be able to start letting you know which drives will physically fit and which drive samples have benchmarked appropriately high in our testing. It would be great if that happened by launch, but it's likely to be a bit past it, so please hold off on getting that M.2 drive until you hear from us."

Indeed, no SSD manufacturer has started marketing their new PCIe 4.0 drives as PS5 compatible yet (unlike the spate of new gaming headset announcements recently), although if I had to guess I'd be surprised if Samsung's 980 Pro and WD's Black SN850 didn't make the cut. Neither have chunky heatsinks to worry about, and their top speeds of up to 7000MB/s sequential read and 5000MB/s sequential write (or 5300MB/s in the SN850's case) should hopefully be enough to satisfy Sony's benchmark requirements. Still, we won't know for sure until Sony publish that official list.