Now streaming live:
Horizon Zero Dawn review
Horizon Zero Dawn is one of the most compelling, beautiful open world adventures ever made, and while its PC port can’t make up for a slight lack of innovation in game design, it offers a good few technical improvements.

If you’ve read anything I’ve had to say about Horizon Zero Dawn to date – and I’ve eulogised it twice already – the tone of this review shouldn’t come as a surprise.

I knew the PC port would have to be either unplayable, or introduce an inexplicable wisecracking pelican as Aloy’s sidekick, to change my opinion of what’s probably my favourite ever action game. And so here we are. Despite a couple of hardware wiggles, and some tough moments with mouse and keyboard in a game shot through with PlayStation DNA, there is no pelican, and Horizon Zero Dawn is, for me, a very Bestest Best. 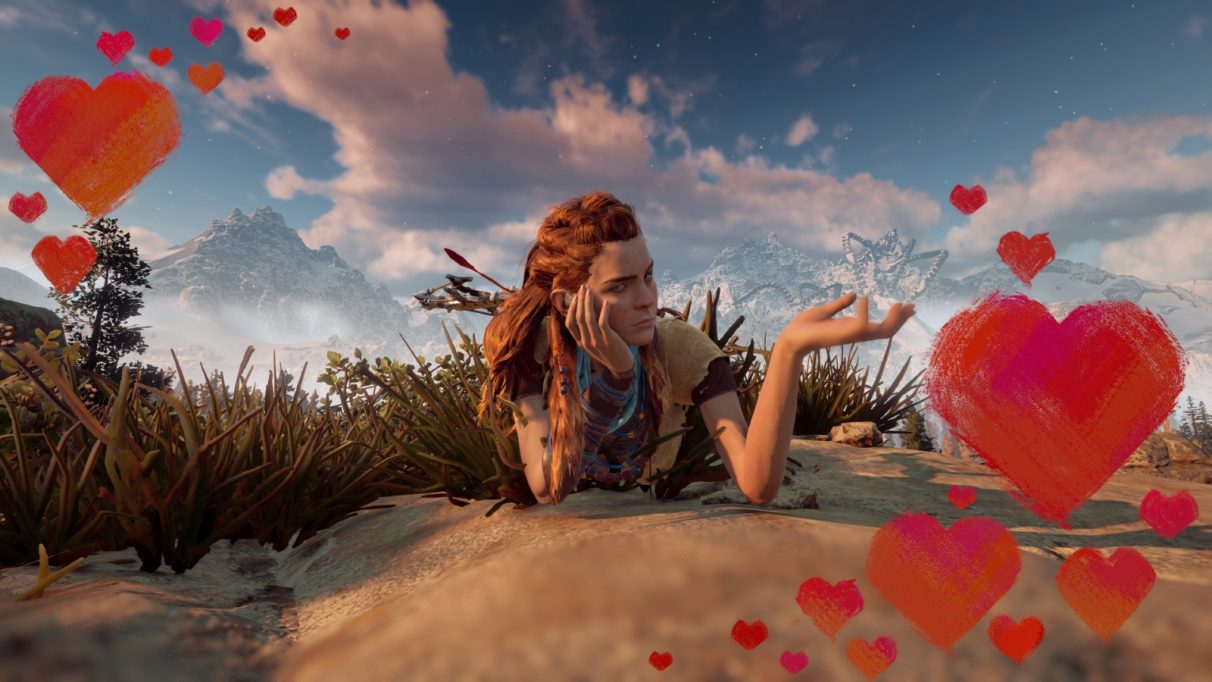 There’s a cracking photo mode, by the way, which is great fun.

I’m not a particularly hardware-conscious man, nor am I that bothered by whether things look good or mega-good. But with a game this pretty, you’ll want to know how well it dresses on PC, and what price your hardware will have to pay to outfit it. The answer is pleasing. On an Intel Core i5-8400 CPU and an Nvidia Geforce RTX 2060 graphics card, I found the game ran comfortably on the “high” graphics presets. I did experience a few framerate honk-ups, and occasionally someone’s fashionable, fur-and-cable adornments would clip through each other, but it caused me no sorrow. Other players have reported much more serious issues, though, and Katharine has been looking into that too.

Techno-dinos
If you are less of a barbarian than me, and want minimum specs, performance benchmarking and all that, RPS machine priestess Katharine has you covered. She’s also done a lovely a dive into the ultrawide settings, and is working on a massive graphics card test.

Beyond the wide range of display and graphical options in HZD’s PC port, there were a couple of small additions that made a world of difference. Firstly, the foliage now moves around Aloy as she scurries through it. I know that hardly seems like a fourth-paragraph-of-a-review thing to note. But Aloy does scurry through a lot of foliage, spending half the game hiding from big whirring bastards in tall grass, and given the game’s plants – which looked so relaxing to begin with – now sway about and that, it’s just that bit more immersive.

The biggie, however, is the ability to widen the field of view. Aloy, commendably, is not a hero from the glute-o-centric, 1990s-Lara-Croft school of design, but I nevertheless spent most of my PS4 playthroughs confronted by her bum, because she filled so much of the screen. In a third-person action game with A) some of the best scenery ever put to code and B) packs of robot gits who surround you and leap at you from all angles, it’s a godsend to be able to tuck Aloy just a little further into the centre of the screen. 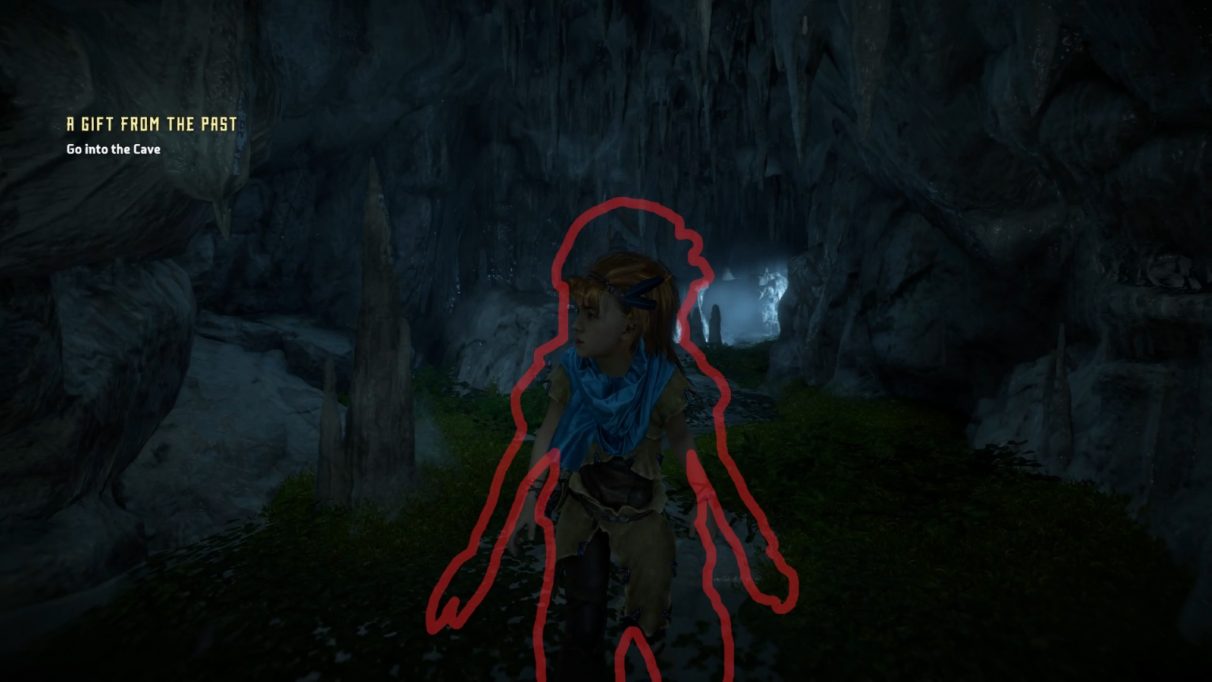 Here I have used sophisticated image manipulation technology to show the difference when you increase the field of view to max, by tracing the outline of the space Aloy (as a babby, in the prologue) would fill on the default setting. Bear in mind this is an up-close shot anyway, so the difference is usually more pronounced.

Dressing to the left
Mainly, things get busy on the left of the keyboard. Sprint and power attack share left-ctrl, while dodge-roll (aka the “don’t die” button) claims shift, and the weapon select wheel occupies tab. Much like Game Of Thrones, this provides a lot of jobs for Littlefinger to do, and poor old Aloy fell beneath the hooves of many avoidable mech attacks.

Speaking of leaping gits, here be the first hurdle for HZD on PC: the controls. If you don’t have one, you should just buy a controller to play this. Full credit to Guerrilla Games and Sony for their efforts in creating a workable M&K control scheme, and I’ll admit that mouse aiming for precision bow shots was a treat. But however much I fiddled with the bindings, and even after a couple of hours to get used to them, I never truly felt the security of having every vital ability tucked safely under a digit.

And now here we are, through the long grass of technology, and out onto the wide open plain of what a lovely game this is. I won’t wax too lyrical, because I already blew 2,000 words of my load on the “quick post” I told Alice I’d write when rumours of HZD’s PC release started circling in January. But I’ll allow myself three paragraphs to summarise. 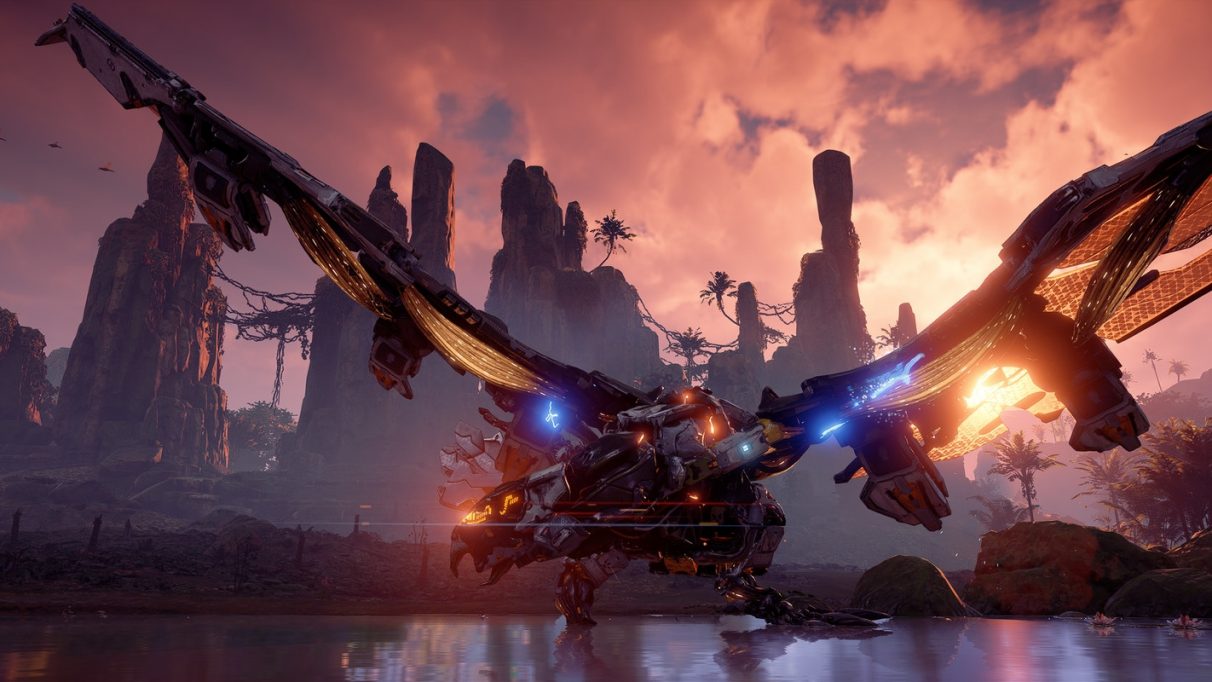 Horizon Zero Dawn is a stirring, sad, good-hearted story, told in a unique science fiction setting whose lore manages that oh-so-rare feat of being up to the calibre of the artistic direction it’s tied to. And given the quality of HZD’s art, that’s no mean feat. The mechanical bestiary of this game is impressively varied, and every one of its entries is a masterclass in creature design. And while the electro-beasts are the big, blockbuster hook for the game, the wilderness they inhabit is no less stunning, and there are moments of inspired visual design even in the most mundane aspects of Aloy’s world.

The fashion, for a start: Guerilla Games have had a right old think about how working, military and ceremonial garb might look if its makers had access to both natural materials and the components of ultra-tech machines, and so vegetable textiles, feathers and leathers are intermingled with LED cabling, weird polymer sheeting, and strange geometric scrap components. I’m not much of a clothes-knower, but when I get the time, I fully intend to write a picture feature on the very best outfits in this game. 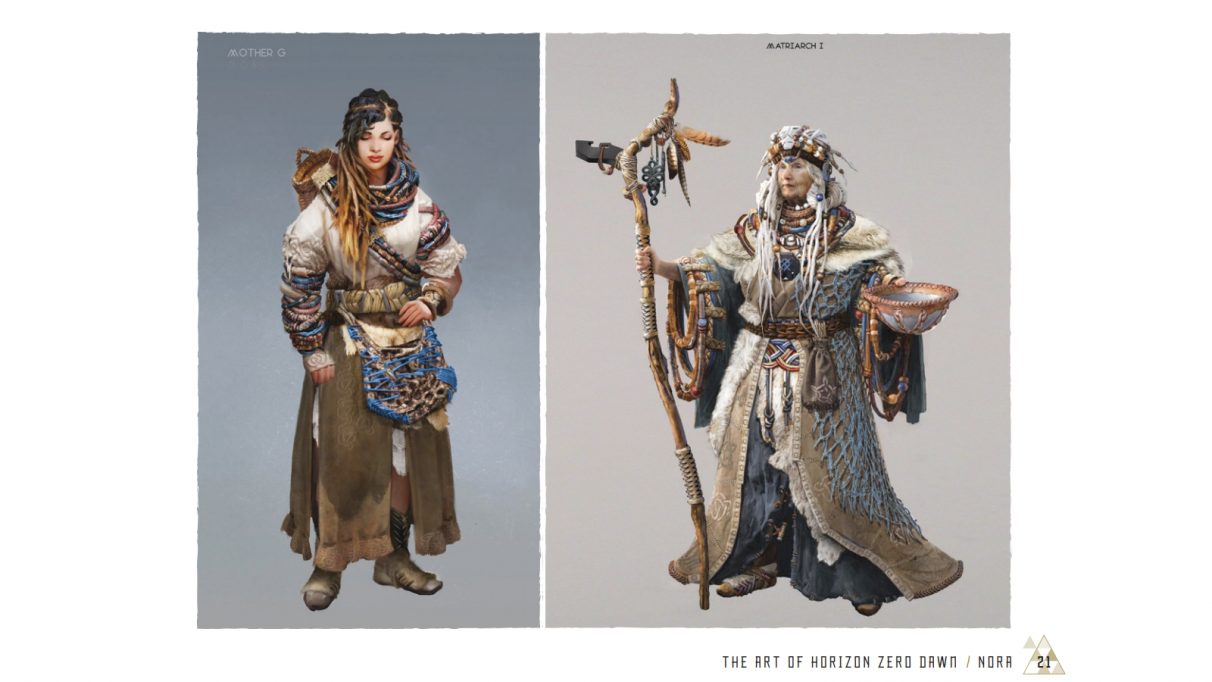 Fashion! (From the digital art book provided with the game).

Bollocks: I’ve just spent one of my three permitted paragraphs of unbridled praise talking about trousers and stuff. But fuck it, the trousers are great. Although I should probably mention the story, as that’s what really hits me about this game. Yes, it has its share of forgettable writing to go with its moments of beauty, but I think that’s reasonable given the necessary immensity of a triple-AAA open-worlder’s script.

The bottom line is that Aloy is one of the few game protagonists I’ve ever truly felt invested in and moved by, and the supporting cast ain’t bad either. Rost, her father figure, feels like someone 2018-version-Kratos met in a support group for gruff game dads, but he’s still rock solid, while the Nora matriarchs are fleshed-out enough to make made-up religious politics interesting. Tribal leaders Avad and Erend are both men learning not to be dickheads in different ways, Helis is a fucking maniac, and Sylens is… intriguing. They’re all superbly acted. 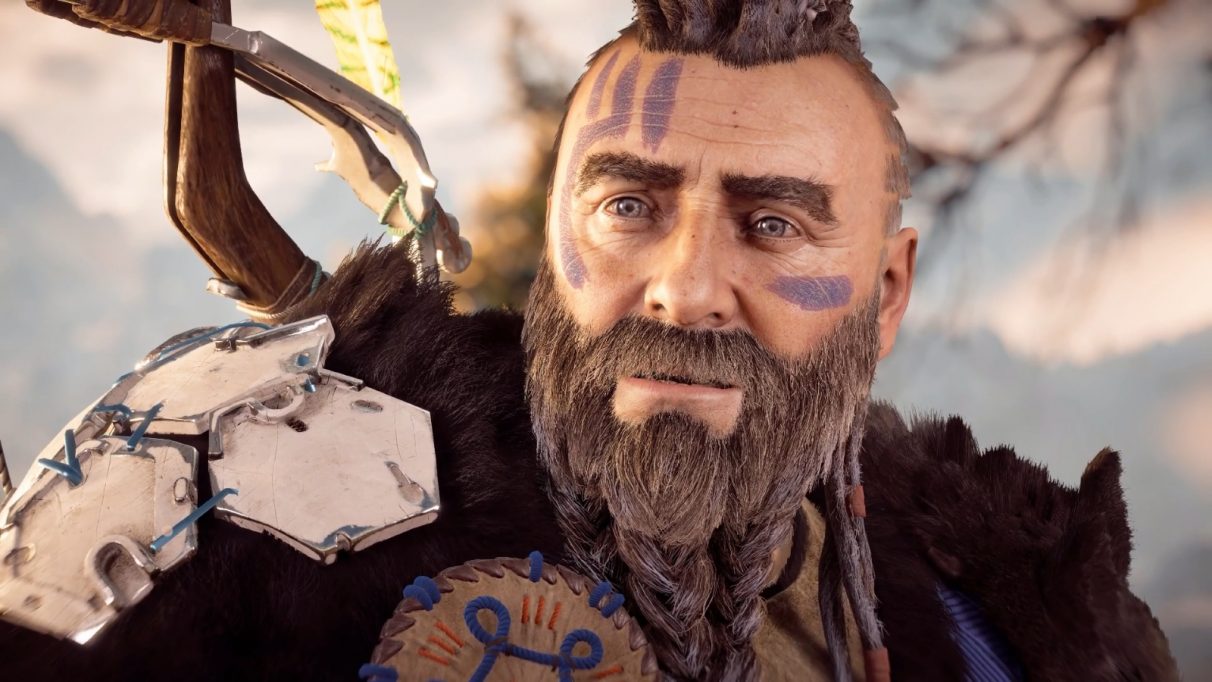 Good old Roast, looking uncannily like a weatherbeaten version of my mate Dave in this shot.

Time for a minor sting in the tail, though. I will admit, with my rose-tinted glasses dulled after my two playthroughs on PS4, that there are areas where HZD could do better. In particular, I wish its mission design had enjoyed as much investment of energy as its narrative and visual direction. The side quests are almost universally uninspired, quickly becoming repetitive, and for all that I love the game, I’ve beelined the main story in both my playthroughs to date, taking only occasional tangents where optional missions promised really cool fights. Altogether, as Colm summarised brilliantly in his video review for us, it does feel a bit like “a Sony-published Ubisoft game”. There are things to climb to reveal new areas on the map, you expand inventory space by finding different animals to gut a la Far Cry, and there are many, many icons to be cleared on the map.

It’s not bad in that regard, per se, just a bit lacking in innovation, even for a game released originally in 2017. There’s also the sense that it was originally planned as more of an RPG. Gear customisation and trading are present, but basic, while cutscenes occasionally feature dialogue options that feel a bit like T-rex arms: curious, vestigial stubs of what might once have been something larger and more useful. 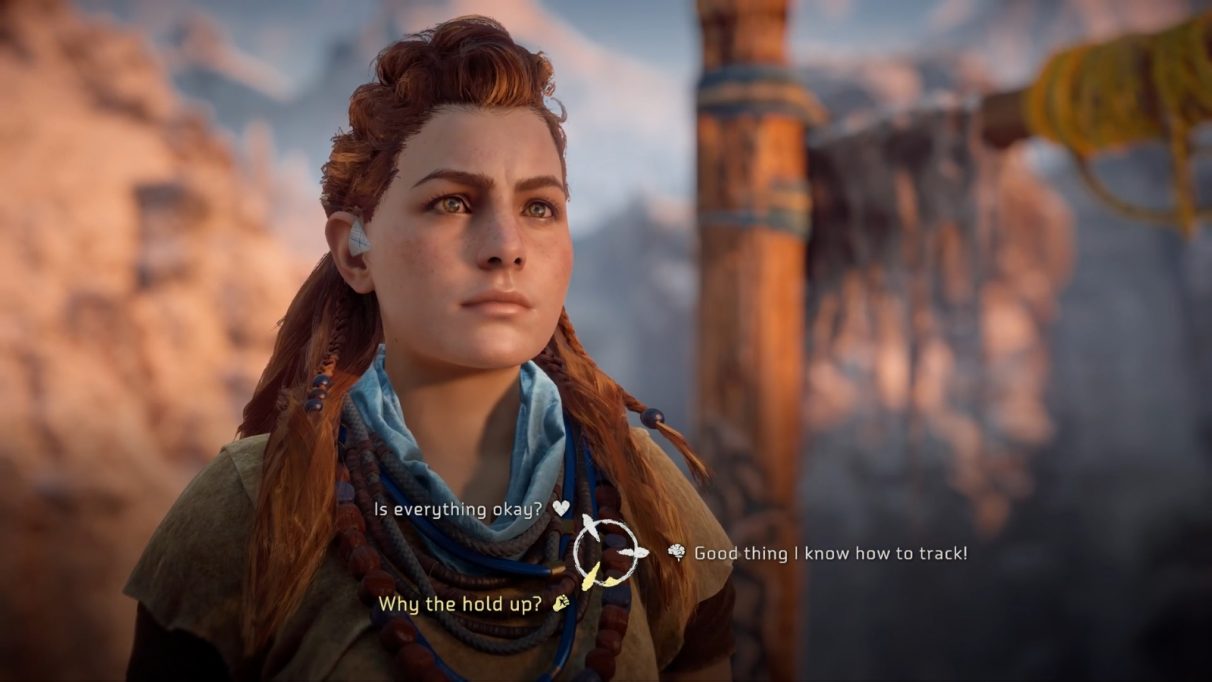 Luckily, Aloy is sufficiently well-written and -acted that I didn’t feel I needed much agency in her to be compelled. And equally, the icon-cleariness of the open world is mitigated somewhat – partially by the strength of the main story, which makes side objectives that much easier to ignore, and partially by the immense amount of balancing work that has gone into making the game’s most common activities satisfying. Much in the same way that it was rarely a chore to take long overland hikes in Skyrim, I find myself rarely resorting to fast travel in HZD. Not just because it’s a pretty world, either. 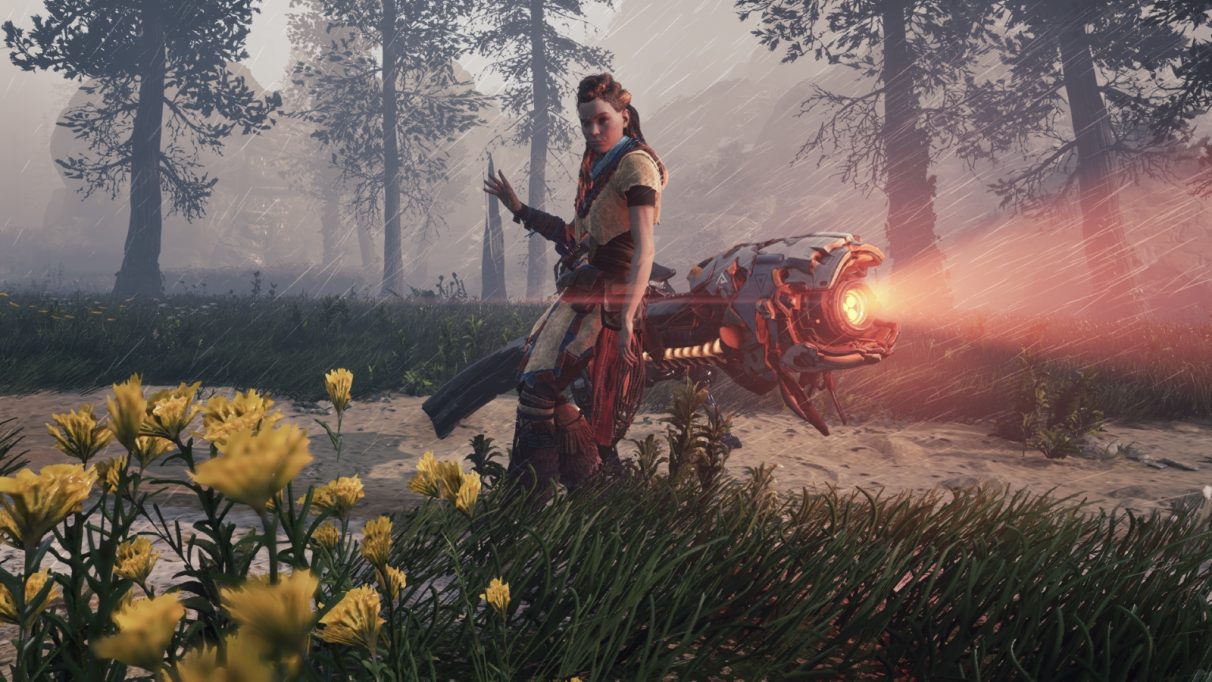 OK, following this excursion into photo mode, I’m now sort of wishing Aloy did have a wisecracking sidekick, so long as it’s this guy.

As I said in my gargantuan hype piece, the game really sells the idea that Aloy is a hunter, as you really do find yourself needing to hunt, in order to scavenge dead roboes for bits with which to make new ammunition, and barter for things you need. Since a big mission will often require a self-prompted hunting trip for the purposes of stocking up, it often makes sense to take a diversion on the way to a new quest to do so, ganking some Metal Michaels and maybe clearing an icon or two while you’re there.

And that’s that, really. Not the most innovative game in the world by any means, but one of the best adventures you can go on inside a telly, and one of the most beautiful, too – especially now that telly is a PC.