I was feeling a bit out of touch yesterday. Games Twitter was alight with loud opinions on Cyberpunk 2077 getting delayed until September, like a jungle full of cartoon animals reacting to the death of some kind of games Mufasa, but I didn’t really care. I worried that maybe I didn’t care enough about big important games any more. Then around 11pm, I read the news that Horizon Zero Dawn might be coming to PC this year, and I went berserk.

HZD is, hands down, my game of the last decade. My bestest of all bests, without a doubt. Even the rumour of its arrival, like the ripple in a glass of water that heralds the approach of a massive metal T-Rex, gives me an excuse to write a feature about it. So, I want to use it to infect you with as much of my enthusiasm for this game as I possibly can. Think of this feature as a derelict warehouse: I’ve locked the door, I’m taking bumps of meth off a rusty hunting knife, and you think I might have a gun. You’re not leaving until I’ve finished bellowing about HZD. LET’S GO. 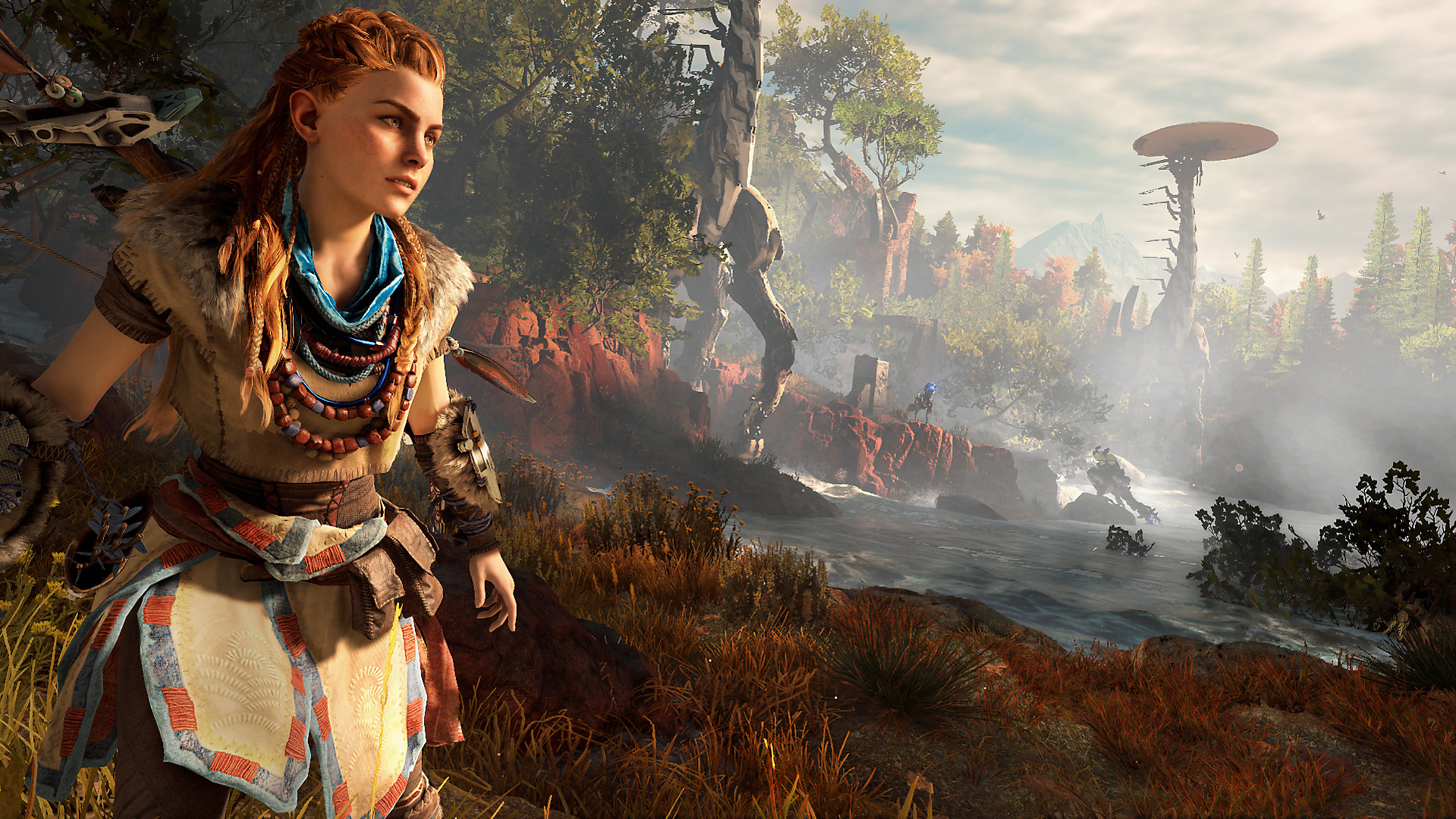 I’ve rarely encountered a game protagonist I’ve felt as much empathy for as Aloy, the main lass off of HZD. I’ve certainly never encountered one I admired more. She’s idealistic without being naive, brave while still feeling afraid, and her pragmatism is only ever outshone by her compassion. She’s human. And while she’s extraordinarily competent, not least when it comes to leaping, sprinting and archerying, she never falls into the stale, self-satisfied superhumanity of so many heroes. Her proficiency and independence never erode her warmth. Nor is she remotely enthusiastic about violence - there’s no quipping relish or swagger when she needs to get killy, no big, tired signposts that she’s a BaDaSs; she just does what she needs to do.

Aloy is, in the words of my wife, who’s even more obsessed with HZD than me, “a strong female character without a hint of Strong Female Character”; her feminism is a masterclass in the principle of show, don’t tell. The night before she gave birth, in fact, she (my wife, that is, not a hallucination of Aloy) suggested we give our daughter the middle name Aloy, and I agreed instantly. I couldn’t think of a better role model. And yeah, you don’t do that with a forgettable main character, do you? The rest of the cast are just as nuanced and memorable - although admittedly we have not given our daughter all their names as well. 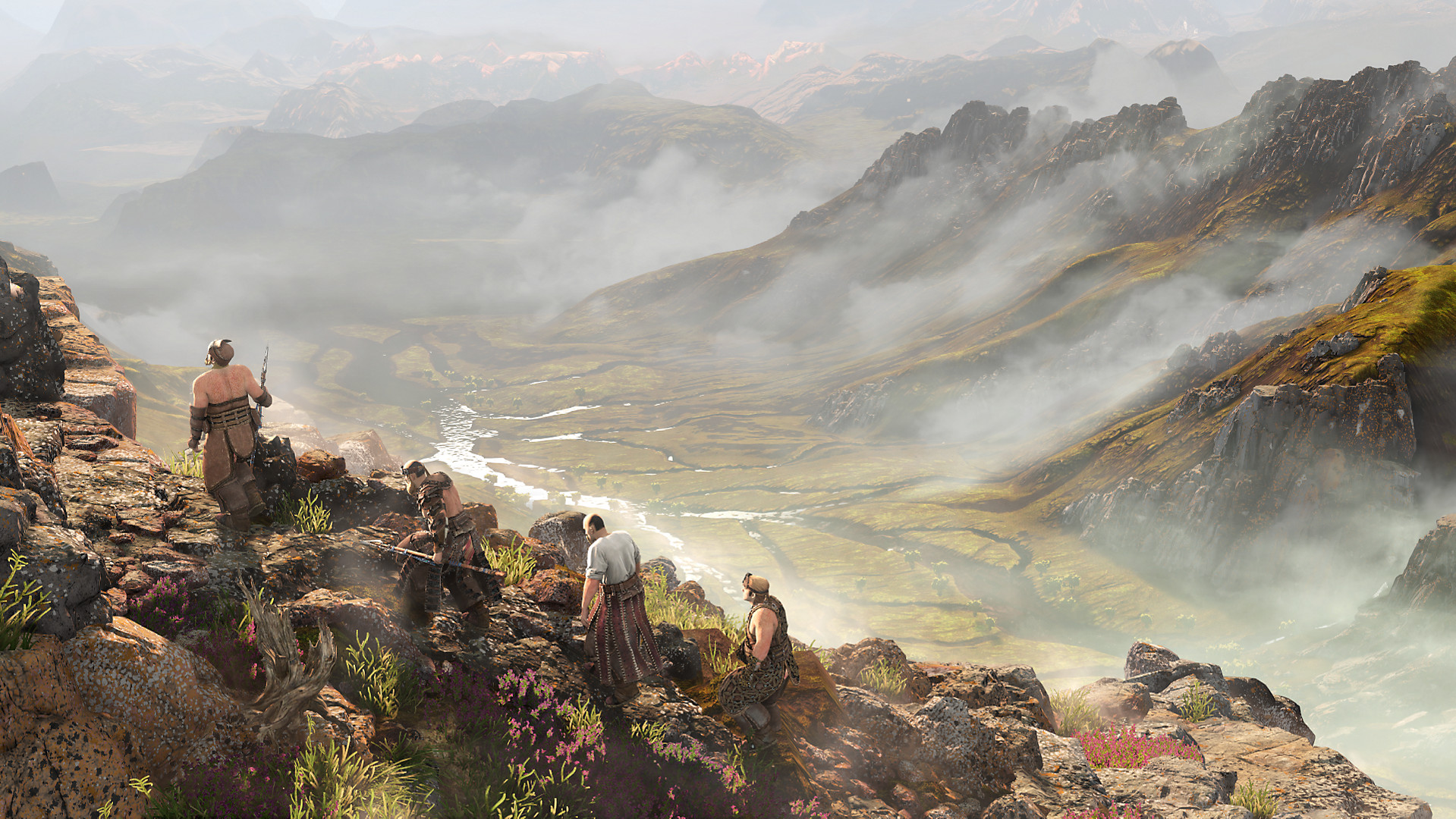 Oh crikey. The writing in this game. “It’s really all about grief” is one of the most tired cliches in very serious game writing, to the point where one sniff of it can drive me from playing a game like the smell of a corpse during a house viewing. But HZD absolutely nails it. It’s a story suffused with the most profound sense of loss, from the individual arcs of its cast, to the science fiction narrative behind it all - which at times, is seriously dark. But out of it all rises an unshakeable, soaring sense of hope, and it’s all carried on Aloy’s shoulders. I’ve rarely felt so responsible in a game.

And while it's an overused word, I know, it resonated. 2017 was a black year for me; I lost a lot. In fact, we* bought HZD after coming home from my dad’s funeral, looking for something fun we could do together. When we slapped it in the PS4 at 6am on a Saturday morning, we didn’t expect to still be on the sofa by 8pm, sobbing at the screen like a couple of pissheads and whimpering “Oh god but it’s so true isn’t it?” after every other line of dialogue. Perhaps some of that was circumstantial, but the game tapped into it nonetheless.

*I’m not going to keep saying “my wife” because I can no longer type it without hearing Borat’s voice over my shoulder. 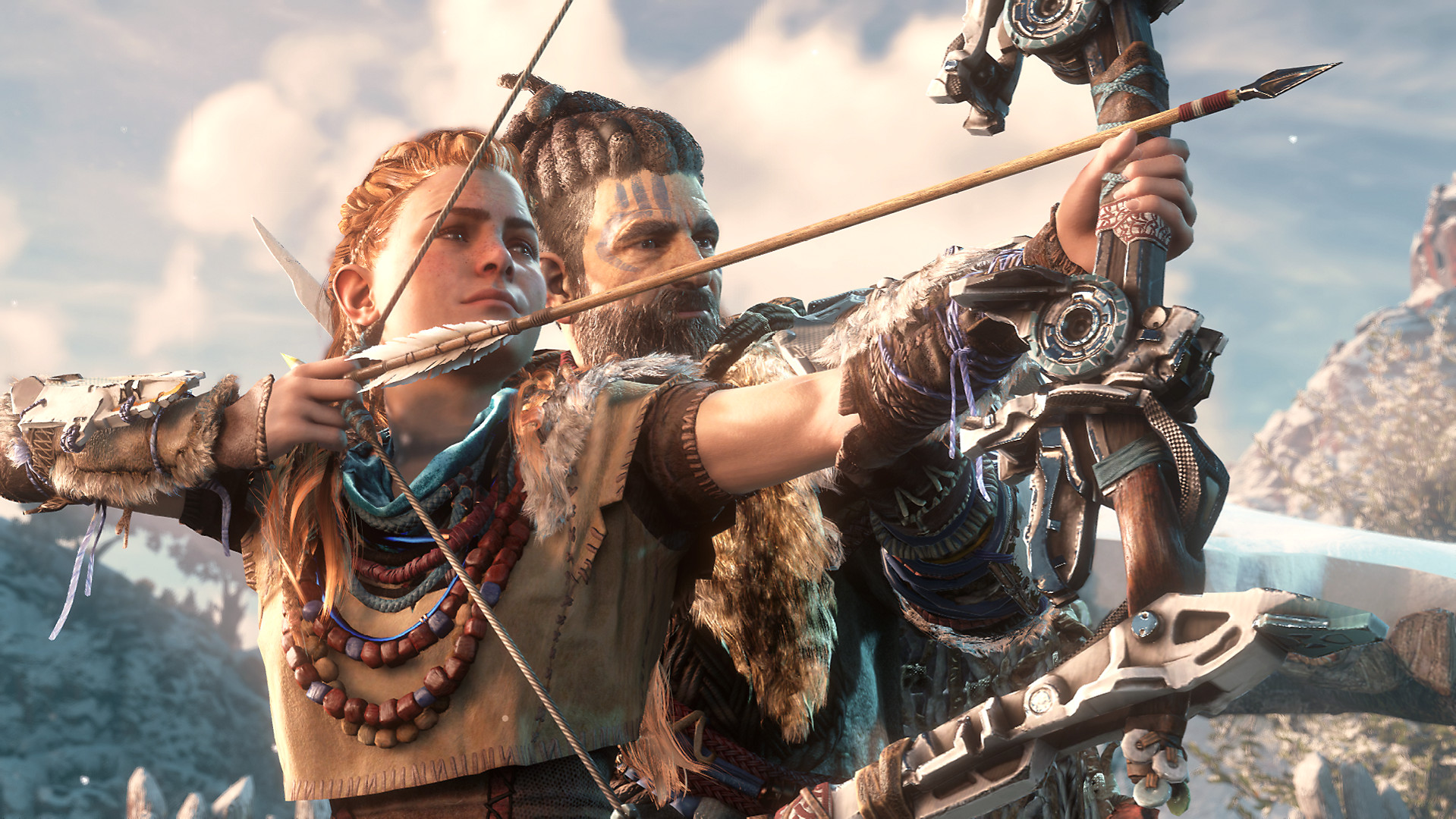 Yeah, sorry, I’m still on this. Because so were we: at 2am, 20 hours after we started, we were still playing. We only paused for a few, grudging hours of sleep before getting up, making ourselves coffee, and riding it through to a Sunday evening conclusion. I never usually do this with big budget games. However much they blow my mind at first, I always end up completing them in lumps over a few weeks, if I finish them at all. I think HZD is the only big open world game I’ve ever completed, and the story had a lot to answer for in that. It’s whatever the digital equivalent of a page-turner is. I can remember about six points in the story where we had to pause, put the controller down with a big plumber’s ooof, and sit in silence for a second before theorising about what might happen next.

HZD is also a rare, rare example of thoughtful, coherent science fiction outside of the printed page. I’ve gotten so used to sci-fi in games and films being a feast of style over substance, requiring almost voluntary idiocy to enjoy. Stories where the only law is the Rule of Cool, and where you can’t look down for fear of realising the scaffolding you’ve climbed is nothing but a rickety, swaying mess held together entirely by Mcguffins and sarcastic robots. Not so here.

Now I’m not one of those people who gets all cat-arsed about total accuracy in sci-fi - some joyless deGrasse Tyson type. But I do expect a story to offer some level of consistency, if not with reality, then at least with itself. Ultimately, any story driven by technology that doesn’t exist is a story driven by magic. And as any fantasy writer will tell you, magic quickly becomes meaningless when it doesn’t have rules. Just because HZD swaps out “a wizard did it” for “a technology did it”, it never gives itself a free pass to stop making sense. 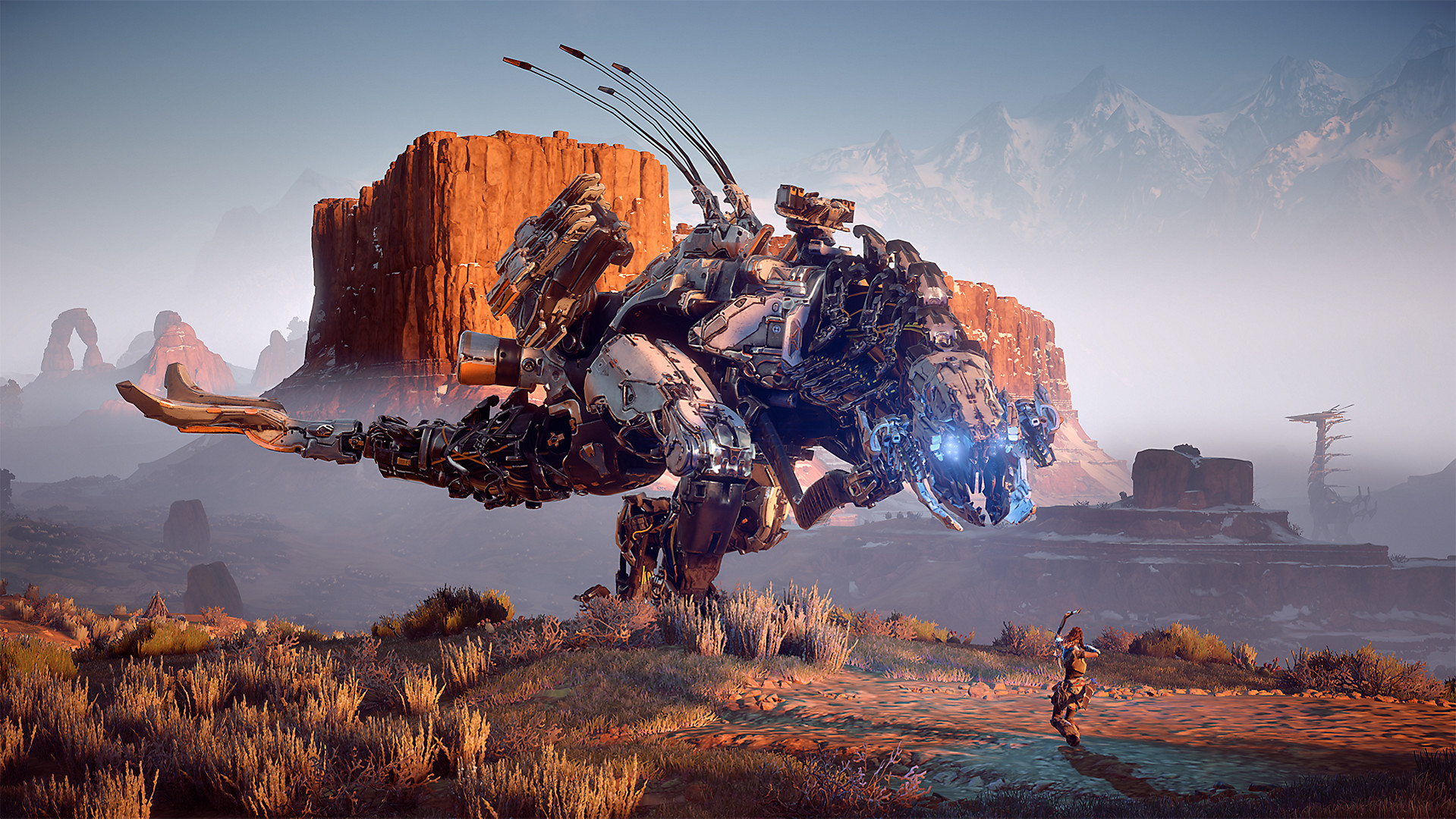 You’ll have to believe me when I say it was an act of restraint to get this far into the article before mentioning the colossal, fusion-beam-toting gigaphant in the room: HZD’s bestiary of mechanised megafauna. Even if they don’t know anything else about the game, people know it as “the one with the robot dinosaurs, right?”. And they really are showstoppers. From canister-backed grazing bots, to whip-tailed ambush predators and drill-faced, burrowing squamatomorphs [I asked Nate what this meant and he said "it means lizardy lad, basically" - Ed.] the size of trucks, the game’s 30-odd machines are a hit parade of creature design masterpieces. They feel just as real and alive as biological animals, and while they’re a thrill to fight (oh lord, the Thunderjaw), they’re just as satisfying to watch as they go about their daily business.

You need to watch them, too. Aloy, like many game protagonists, was raised as a hunter. But while this is usually just an excuse for a character to be very good at gunishing things, and is rapidly dropped in favour of you basically being a soldier, in HZD you never stop feeling like a hunter. The machines are the main source of the crafting materials and trade goods you rely on, and those goods run out fast. Even when the quests do get more soldiery, as you move across the landscape between them, you’ll frequently have to stop to plan hunting expeditions based on what you’re running low on, what beasts can be found in the local ecosystem, and what weapons and tactics you’ll need to take them down.

Every machine has a completely unique set of behaviours, attacks and weaknesses, and the only way to learn them is by studying them. Somehow, the game manages to convey the complex relationship between reverence and violence in pre-technological subsistence hunting, while also somehow involving plasma weapons. You’ll feel a lot of things about HZD’s enemies, but above all, you’ll feel respect. (With the one exception of the cargo-carrying, multi-limbed dickhead we dubbed “the bully crab”. This petty imbecile was forever shoving me into corners with its shield, then mauling me with its pathetic little hands. I will never, ever respect the bully crab.) 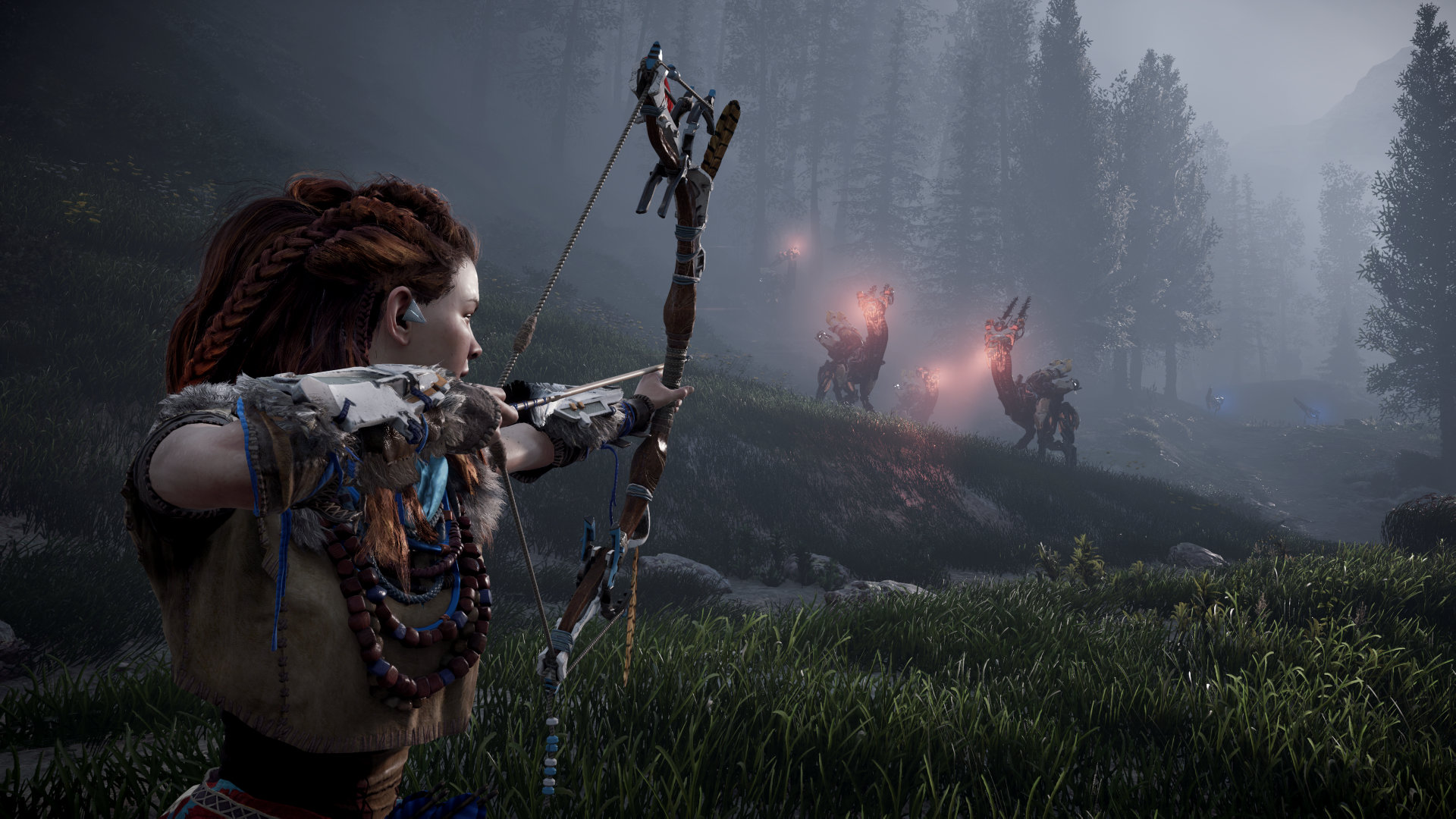 Look, I have to wrap up in a minute because this is getting ridiculously long for what is ostensibly a listicle published off the back of a rumour. But there is so much more. HZD’s machines are as good as they are because everything about the way they look and behave makes sense in the context of the game’s backstory. It’s that internal consistency thing again, and it applies to so much in the game. Guerrilla Games made the effort to go one step beyond cliche in every element of HZD’s design, and it makes a literal world of difference.

That world is as post-apocalyptic as it gets, with the last, rusted traces of our civilisation just poking through at its edges, but it dodges so many of the knackered tropes that have made me sick of the whole after-the-end genre. It would have been so easy to write in tragicomic cults worshipping MacDonald’s signs and the like, but instead the few identifiable vestiges of our culture feel peripheral, as relevant to the people of HZD's world as Sumerian pottery is to most people today. The new human civilisations which have sprung up to replace us are weighty attempts at speculative anthropology, with aesthetics, customs and cultures designed from first principles, rather than being palette-swaps of historical peoples. Admittedly, I’m in way too privileged a social position to judge how well these invented cultures dodged appropriation - there were definitely moments of doubt - but they did so much more than the Vikings-but-not, Romans-but-not and Zulus-but-not of most fantasy settings.

I’ve not even talked about how beautiful it all is. The genuine awe I felt as I crested a grassy ridge and looked out over a maze of red-rock canyons and warm green pools, thronged with iron crocodiles beneath a setting sun. The sudden, chthonic thud of heavy footsteps which jolted me into a panic, until an immense but harmless Tallneck strode gracefully into view. The plains of rippling grass, with half-grown-over shapes that seemed like boulders, until I noticed the rivets which revealed them as wind turbines. The mechanical horses you can tame and ride (I called mine Fantasy Boy), with their flowing manes of flex-cable. And the full four hours of the game’s soundtrack, which runs the gamut from heartbreaking orchestral numbers, through voice-and-percussion diegetic pieces, and the anxiety-inducing, doomy electronica accompanying some later boss fights. There’s even a three-movement religious choral suite, composed in the language of the sun-worshipping Carja; I’m listening to it right now, and getting a bit weepy.

There’s more. A lot more. But I won’t get to talk about it, unless this rumour proves to be true. Come on, Sony. I know you’re reading. If you can let Death Stranding cross over, you can let Horizon: Zero Dawn come to PC as well. Do the right thing, yeah?