It's been less than a month since ant-bothering shrinky garden survival game Grounded entered early access, but in the current era, three weeks could mean anything between a day and four hundred years.

In any case, I'm rather fond of the game, and have attacked my own friends for daring to menace its ants, as warned. So you can probably imagine how excited I got at the prospect of interviewing its lead designer, Obsidian's Adam Brennecke, about the ants. That's not all I asked him about, and I'll have more to share next week, but this article today is about mostly about the ants.

While Grounded is, technically, about surviving at tiny scale in a the jungle of a suburban back garden, the star of it is of course the wildlife, and a lot of that comes from how much personality each insect has. When you see an ant, it's not just a case of "there's a monster". Each creature has its own behaviour, and seems to have its own thing going on whether you're there or not.

This is something the team aimed for. Brennecke elaborates: "We were looking at the survival genre as a whole, and what new things we could introduce to it. I always felt like the worlds are pretty static. We had an opportunity to add more of a dynamic simulation element, where a lot of unexpected things could go on."

The insects specifically helped with that. The key wasn't to make them act exactly as they would in real life, but to use that existing familiarity players have. So when you encounter ants, you have an intuitive sense that they're curious, that they explore and forage for food. So in game, they'll notice you, and come over to investigate, and there are little animations like the ants tilting their heads, and the aphids leaping in surprise. Everyone already has preconceived ideas of what an insect's behaviours could be when a new one is introduced in the game. The team wanted the first encounters to be fun, and to build a place where you feel like you can explore.

So, I ask Bennecke, if I was to follow an ant going about its day, what would I see? 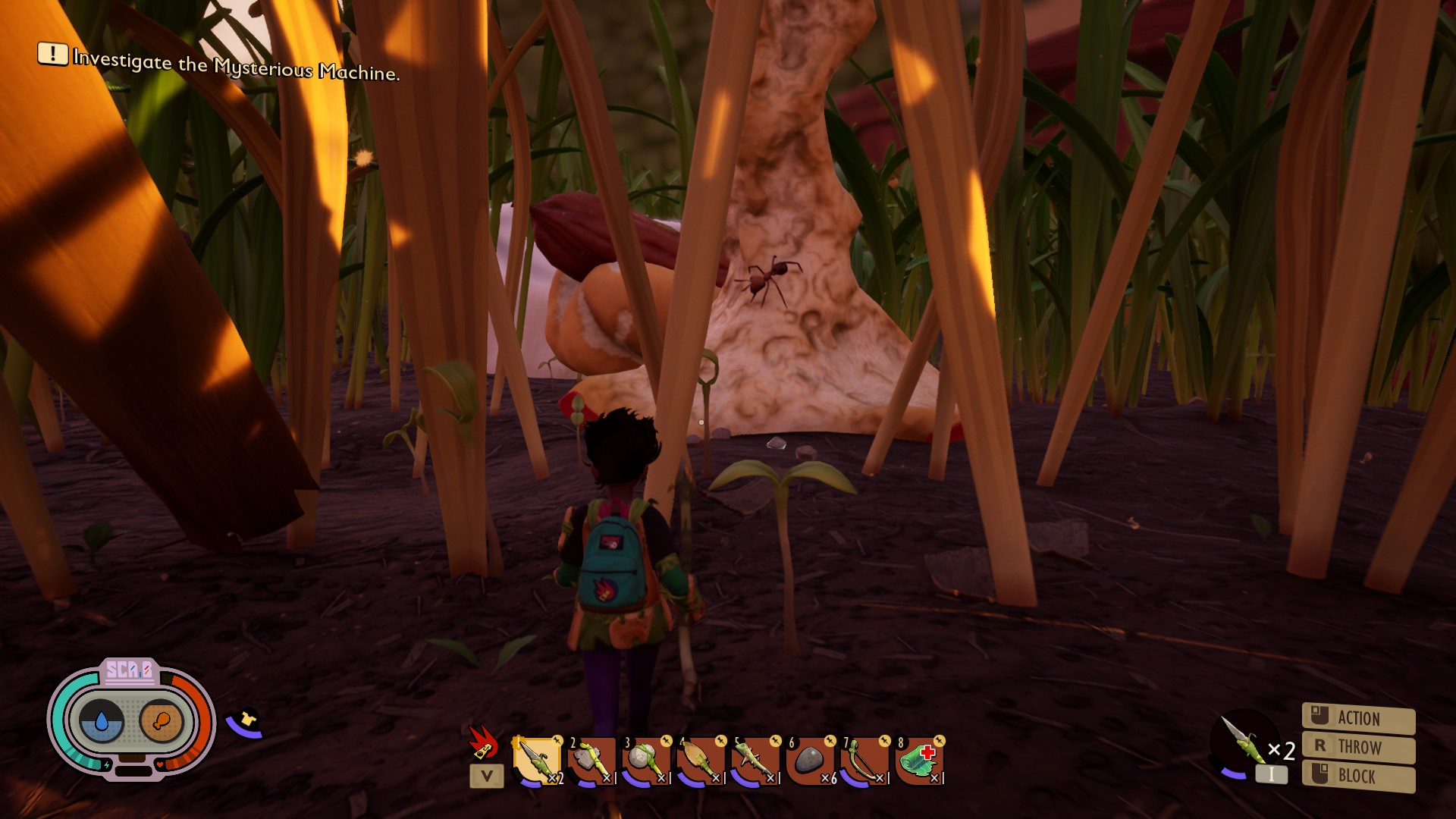 Brennecke grins. Ants were key, it seems. Around this time last year, there was still a concern that the world was too static. Brennecke co-ordinated with senior programmer Brian MacIntosh to revamp the AI, after reading lots of papers about AI, and virtual world games like The Sims. The ants were perfect to add movement and life because they're curious, and friendly at first. The dream was to add a trail of ants going to and from a food source, so the player stumbles across it and sees ants going one way without food, and going the other carrying food in their pincers.

They built on these ideas to give the ants natural behaviour patterns. They have a home where they actually sleep, and they actively scout to search for food - they're not programmed or scripted to go directly there. Once they find food, they'll harvest it and start carrying it back to special storage rooms in their nest. And at the same time, they're dropping pheromones.

My ears perk up at this. I'd suspected, but hadn't decided for sure if it was a dynamic system or just clever pathfinding. If you're into ants at all, pheromones and communication between the ants are probably the first questions you'll have when you encounter them in Grounded. Brennecke explains: "The way it works behind the scenes is they're dropping these little nodes and the nodes can be read by other ants. They broadcast information about where things are in relation to them. So they can use this pheromone path to find other food items, follow their friends around and stuff like that."

I ask if there are plans to give the player ways to mess with the ants a little, maybe manipulate their behaviour through the pheromones. The team have talked about it, he says, and there are long term plans to interact with those systems on a deeper level. That's the kind of detail that will add another layer to the game, and his excitement is obvious.

The ants are still getting some love in the meantime, before more ambitious updates. Obsidian have recently added eggs to the nests, and the plan is that once ants start getting killed off by the player or their natural predators, the ants will start laying more. Ultimately the goal is to introduce an ant queen who will replenish the nest's population by laying eggs, instead of the typical game thing of just spawning more adults in.

I'm curious how the game's roadmap is looking in terms of creature behaviour. The core of the game is already pretty robust, but there's obvious potential to not just add more stuff, but to deepen and complicate the interactions, the ecology. There's a lot to come, it seems, and at least some of it aims to be more than just additive. They've already experimented with flying insects, which will add another layer to base building and defence.

Brennecke says that the main question when a new creature is introduced is: how will it fit into the world? Obsidian try to look at it as a whole, because you never know what will mess things up behind the scenes. Apparently it's happened before. "We have like a bunch of knobs, and if they're not tuned quite right you might enter a game and wolf spiders have taken over the world," says Brennecke. "We have to be very careful about what we introduce to the yard. But we definitely have a good framework, and we want to continue to add cool behaviours and interesting things that make the creatures feel more alive." 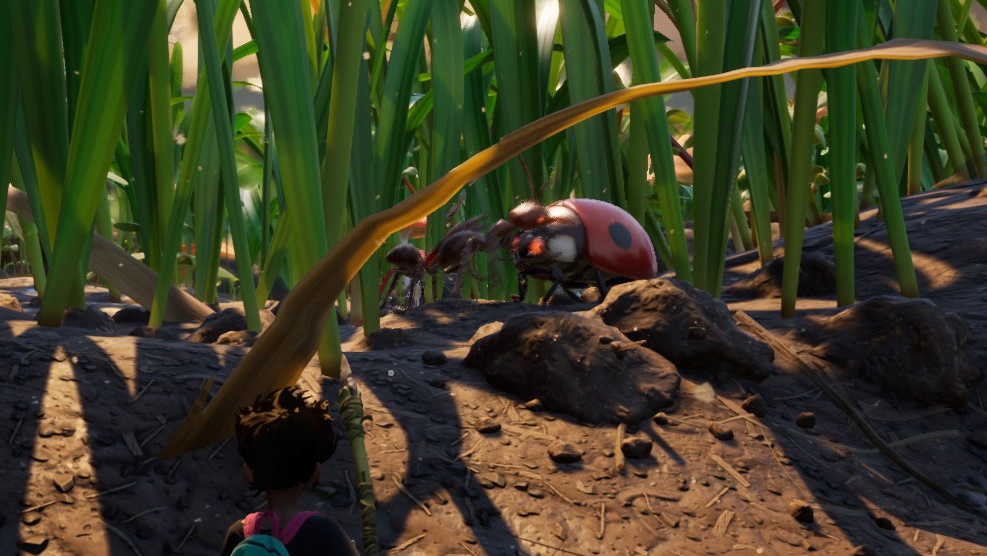 Brennecke goes on to say, and I have to agree, that it's this added touch of liveliness that separates Grounded from a lot of other games. As a developer and programmer, he loves looking at the parts and the systems and seeing what they can do, like when you see a ladybug and spider battling it out and you can get involved or just cheer on one side. That's fun for players too, and something I've enjoyed in any game going all the way back to Doom. It turns out that Doom was even one of Brennecke's reference games, where monsters could get pissed off with each other and start fighting while you hid and waited.

There aren't as many specific plans for the garden's plant life, although when I asked, Brennecke confirmed that it's an idea they want to explore more. Currently, the player interacts with plants a lot, but the creatures don't affect it much. They're looking for player feedback and suggestions on that subject in fact, which in a roundabout way brings me to asking what he can tell me about the bees.

Bees were in the game before its early access launch, but they were pulled out because of problems with pathfinding, and a few conceptual details. They fly so fast that it's hard to figure out how they should move, how they should work at that scale. Obsidian are working on those issues, but the current concept is for bees working as an upper layer, where you'll see them flying overhead but can't really interact with them right off the bat. You'll have to build up your tool set and knowledge base to even reach them. They're also working out how to implement their interactions with flowers, and how they can pollinate plants, or how the player will be able to craft things out of bee parts and products.

Brennecke says they definitely want some larger things in the yard at some point. The whole concept of the game is seeing things from a tiny perspective, so seeing something much larger than an insect would be exciting and impressive. It's tempting to speculate, but Brennecke is tight lipped. So what's around the more immediate corner for Grounded?

The August update, he says. There will be quality of life improvements, and bugfixes, as you'd expect. They're also debuting a new "creature" (he emphasises that specific word, but won't give a hint beyond that), and the ability to customise your character a little. Not so much the appearance, as there are already craftable outfits that are visible on player models, but the next update will enable the player to tweak their abilities in terms of stats. At present, Grounded is fairly light on stats, but it sounds like this could change a little.

Change is, of course, part of the point of early access. Grounded's Steam store page stresses the uncertainties of development, in a bid to be transparent, but Obsidian are aiming for a 2021 release. I'm excited to see what else they can bring to the game in that time. Mostly the ant stuff though, obviously.