To the untrained eye (eyes that haven't spent many an hour trained on an exquisitely detailed topographical map, checking on all corners of your immense empire), Humankind probably looks like any other 4X game where you shuffle units around and micromanage different settlements. But according to the hands-off demonstration shown at Gamescom this year, it ain't.

4X stands for explore, expand, exploit and exterminate, the four key things you have to do to run a successful and burgeoning empire (and in the game?), and Humankind is Amplitude's take on a big sprawling historical strategy game. Amplitude's previous games, Endless Space and Endless Legend, were apparently practise for this, their magnum opus.

Maxence Voleau, the lead game designer for Humankind, joined Amplitude just before the release of the first Endless Space, and said that, although a historical 4X game was always the goal, when the studio was founded, nobody there had made a 4X strategy game before.

"The idea was to start with a simpler game in terms of technical issues," he said. "Like, doing a space 4X is easier because you have no terrain to produce."

Then, moving to Endless Legend, they got the feel of working with terrain, and the issues connected to that. 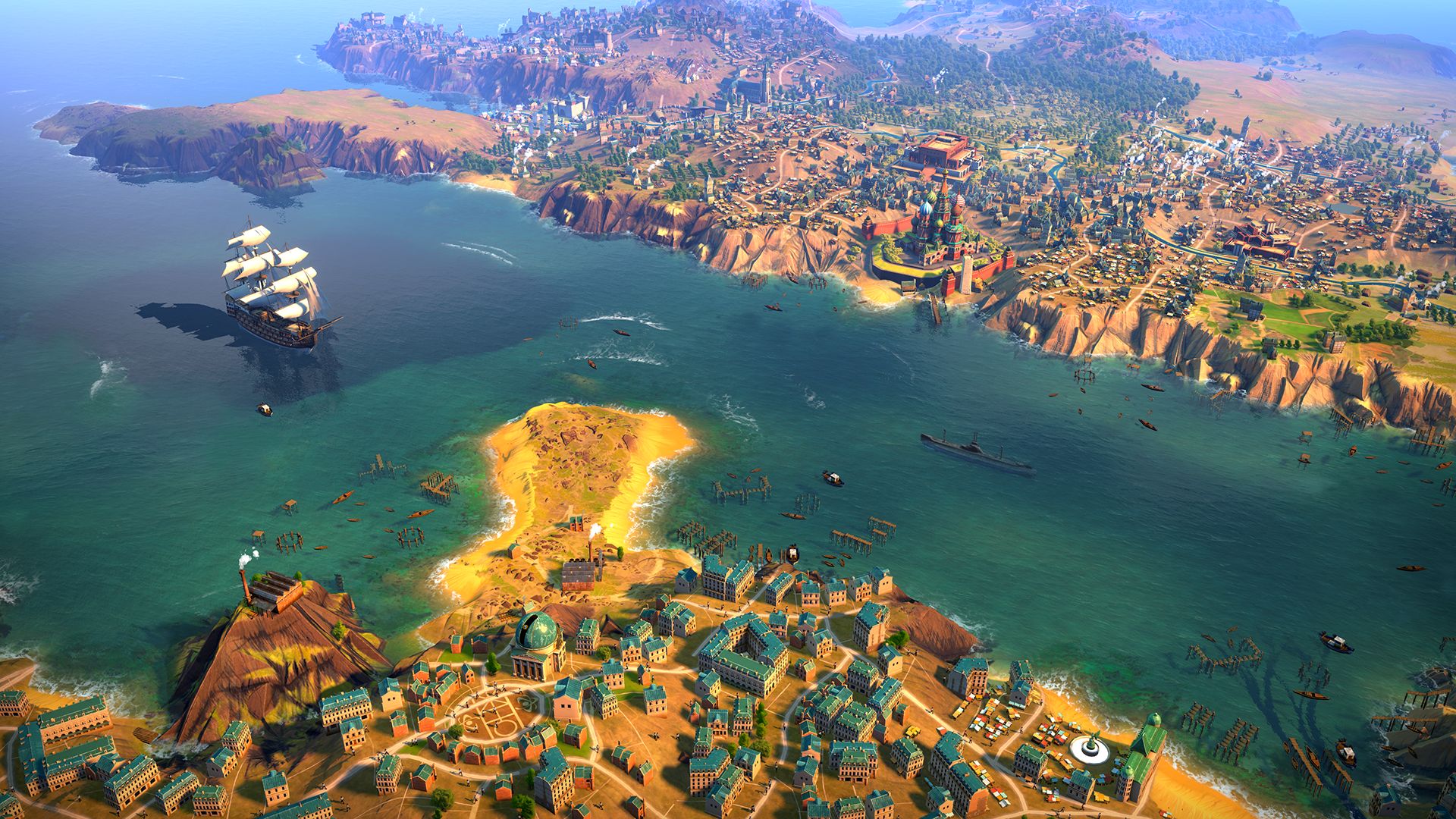 The terrain is going to be very important to Humankind (and in the game?). During our demo, when the camera zoomed in you could see little deer running around in herds, and people walking the streets of the cities (executive producer Jean-Maxime Moris said "the devil is always in the details"). But during the presentation and the interview, the importance of the map was emphasised, and almost everything in the game plays out there.

Voleau said that a downside to strategy games is that they often turn into games of multiple screens, switching from one to another, in a process that can be scary for players who aren't experts in the genre.

"We wanted to break that, wanted to avoid players being lost," he said, describing how they want the screen to be on the map most of the time. "It drives lots of design decisions to bring the action and the information into the map visibly. Everything will play there, from economy to battle, to expansion, everything."

Yup, war isn't instanced away from the map at all. You move your army around as normal, but when you start an attack it deploys onto the terrain where it is, spilling out into the different units that are comparatively giant next to the cities they're about to attack. Enemy units do the same. Sadly, this act of deploying was absent a sploot! noise that I imagined, but it still looked pretty cool. Moris said that they have more than a hundred units.

"Out of a million possible combinations, you’re going to see those armies getting ready for combat together, and yelling, and marching," he said, mimicking the little war cry that the soldiers made in the demo. "It’s going to be a surprise every time."

The "million possible combinations" stat he cites is probably an accurate figure (I haven't actually sat and worked it out), though it's hard to know at this stage how much it'll affect your final game. It's calculated via the other twist of Humankind, the ability to mix up different cultures and civilisations as you build your own empire. There are six ages to progress through (neolithic to modern), each with 10 different cultures to choose from.

But the thing is, your culture choices combine, so you end up with a civilisation that bear the marks of multiple cultural histories. You could have cities with Egyptian pyramids down the road from Japanese temples. There's also an option to 'Transcend', taking, for example, the Ancient Egyptians right up to modern times, although it's hard to pull off for more than one era, as your units quickly get antiquated compared to others. 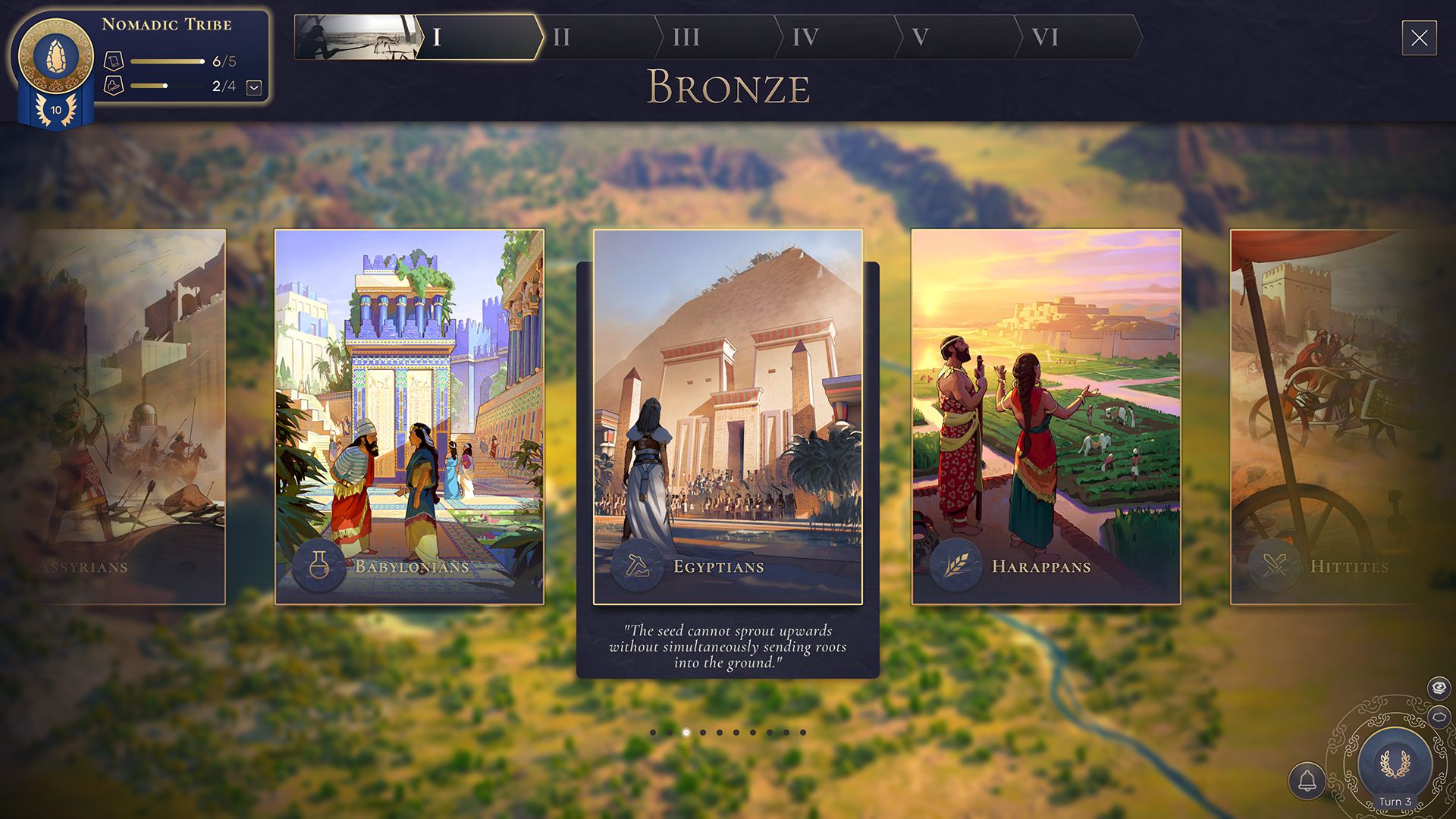 Once you get really good, you can perhaps predict tactics based on what your opponents have chosen. If they have sea ports unique to a culture that has sea-based bonuses, you can infer that they are, therefore, playing the sea. Even when you take over a city, it keeps its history. Common buildings will be replaced by your civilisation, but emblematic buildings won't.

"You will be able by looking at the map to identify who built the city and at which time, basically," said Voleau. Moris added that it's meant to be like visiting real cities, like how "if you visit the south of France you will still find remains of the Romans," the same as you do in Bath in the UK. This will, hopefully, make them stand out in the field against well-established heavy hitters like the Sid Meier-shaped elephant in the room, the Civilization series.

"We are huge fans of Civilization," said Moris. "But you know, they’ve been around for 25 years and it’s time for new ideas, and a bit of freshness." Voleau described it as a "friendly competition" and said that they're inspired by Civ, and hope they can inspire them too. "I think there are games for everyone, and they can co-exist, " he said, which I thought was a nice sentiment. Moris laughed, and called him a hippie, adding that they love "peace, love and humankind." 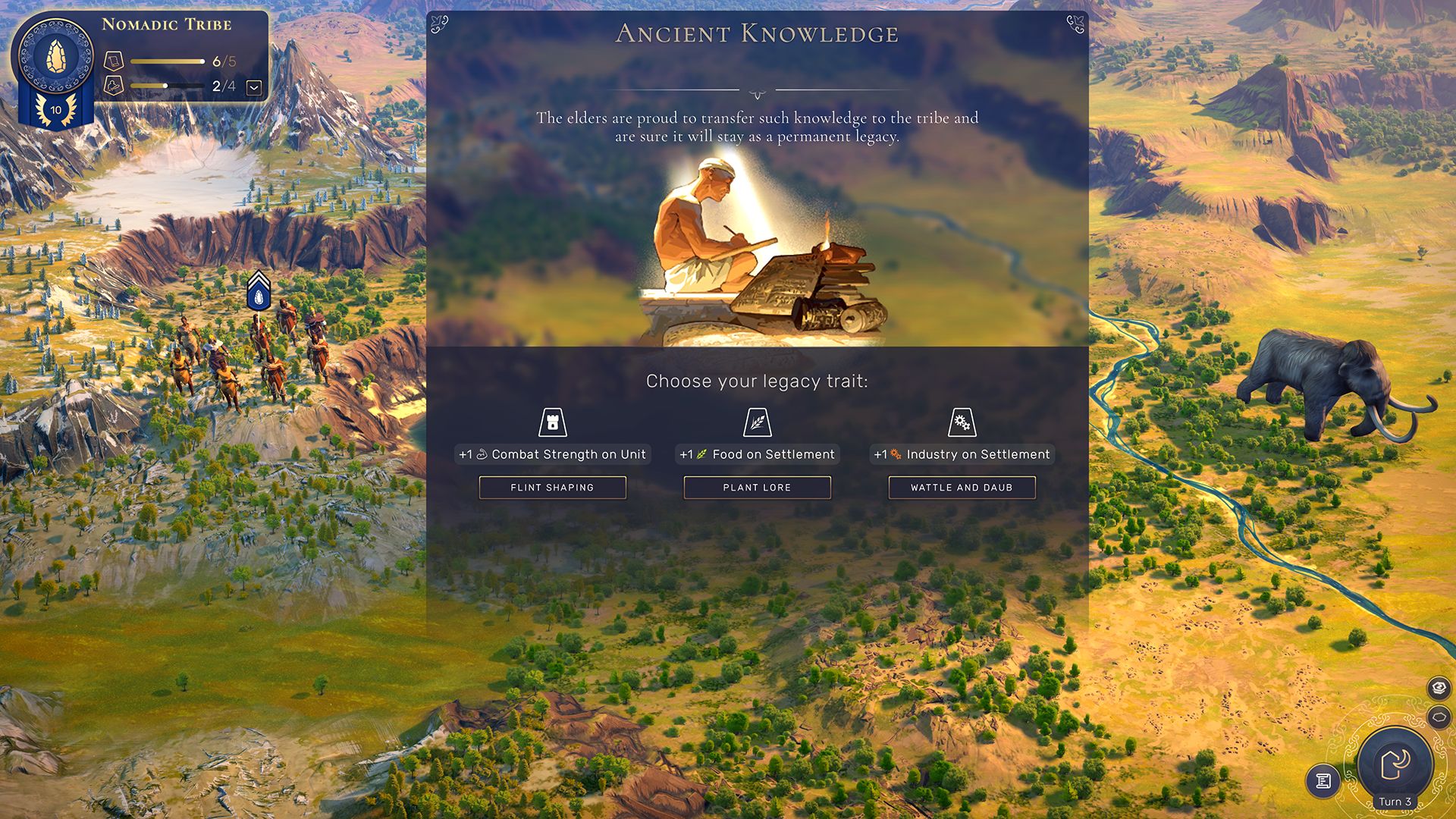 The name itself does capture how Humankind aims to be a bit different. Moris told me that a key thing driving the conception of the game is history and anthropology, and the blending of cultures over time, which is part of the history of every single nation on the planet. The hope is that players make a deep emotional connection to the civilisations that they create.

Moris also has an important role as the member of the team who didn't like 4X games before joining, though he has since "played the hell" out of 'em. His "newcomer approach" helps the team to focus on overall accessibility and user experience. 4X is a daunting genre to play if you're not already an expert in it, as it has so many established yet unspoken rules and tactics. Voleau said that Moris challenges the bias they have from already having made three strategy games, and are working at having better tutorials.

"For Humankind," he says, "it’s all about finding a compromise between depths. We don’t want to lose the strategy depth we have, but we want to open it to a broader audience."

Amplitude work closely with their existing audience too, via a platform called Games2Gether, where fans can vote on ideas or suggest new ones. Amplitude share design documents and concepts with their fans in advance. Open development can be a risky business, and Moris admited it "can get hectic", but that if you "sail a steady ship" your game will be better for it. Voleau credits have a strong and quickly defined vision for the game, to the point that the community can almost self-moderate ideas. It's still a "huge amount of work," he says, "but it's very satisfying." 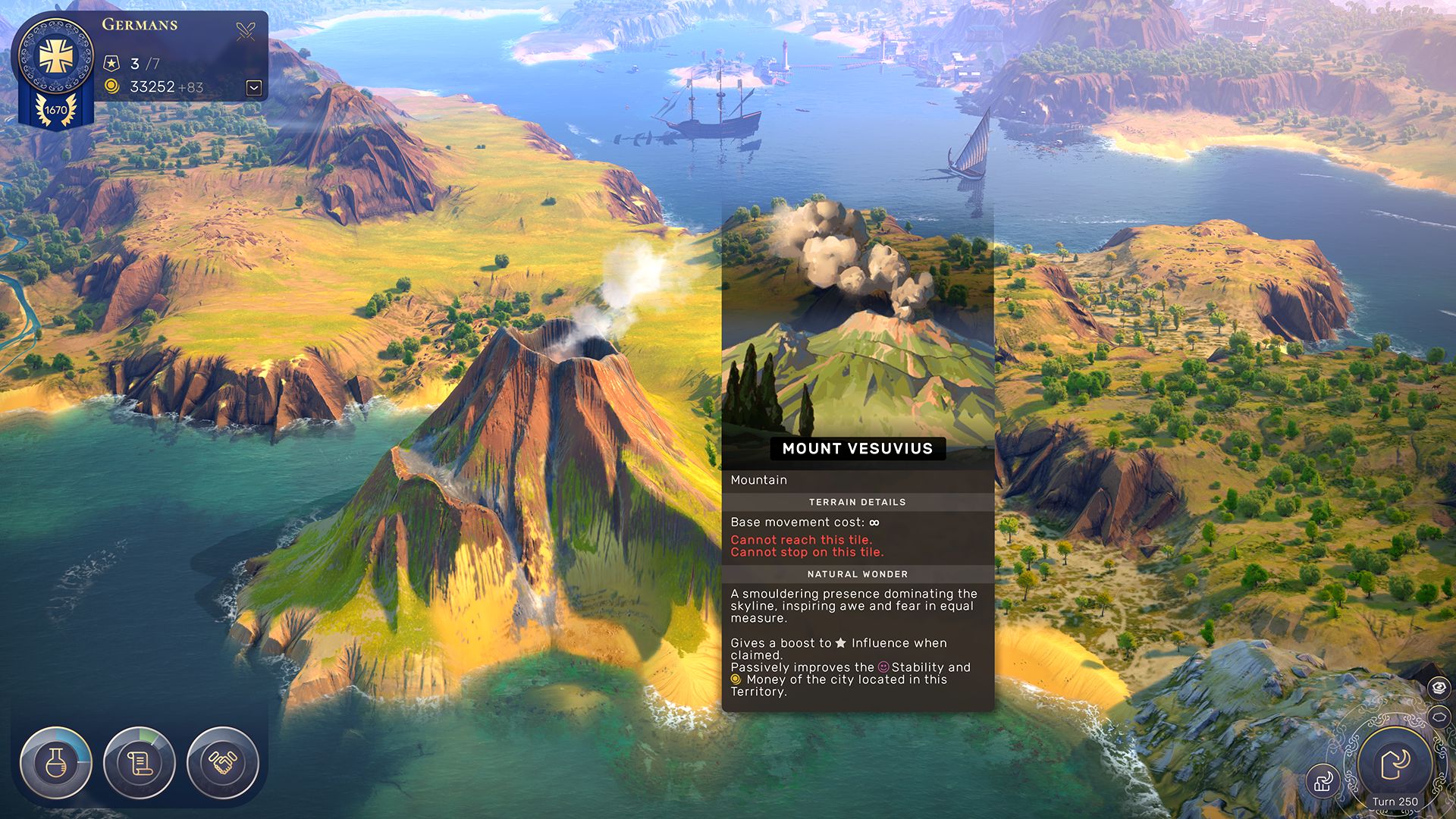 So far it seems Humankind has their general approval, but the hands-off demonstration we saw didn't show loads, at least not compared to the amount of stuff that ends up in a finished 4X. It did effectively communicate the tone, and it's perhaps slightly less po-faced than other comparable historical sims, which all seem to take themselves far too seriously. It did also look incredible. It's a strong enough opening punch, but more needs to follow.

I asked if they're planning to go early access or hold closed betas, and Moris said that they're not ready to talk about that, but do have some plans, and mentioned Amplitude's history of interacting with the community, and online interaction. Humankind is currently slated for 2020, but hopefully I'll experience some more interaction soon. (And in the g-)