If you click on a link and make a purchase we may receive a small commission. Read our editorial policy.
Developer: Asobo Studio
Publisher: Focus Home Interactive

I am famously not a fan of children in video games, because I think they mostly dead-eyed haunted dolls that are used as cheap, empty receptacles for player empathy. I don’t even like Clementine in The Walking Dead. Yes, I am a monster, etc.

I tell you this so you understand how cute Hugo in A Plague Tale: Innocence must be for me to love him. He is a little stampy only-just-not-a-toddler bundle of wonder. I want to pick him up and pinch his little cheeks.

You play as Hugo’s older sister Amicia, and both of them, the children of a local noble, are cast out alone into the local medieval French countryside to fend for themselves. Their home is attacked by the Inquisition, who are looking for Hugo. Thus the intrigue and danger are introduced to A Plague Tale, a third-person game that combines puzzles, stealth, occasional combat, and rats. Lots of rats. 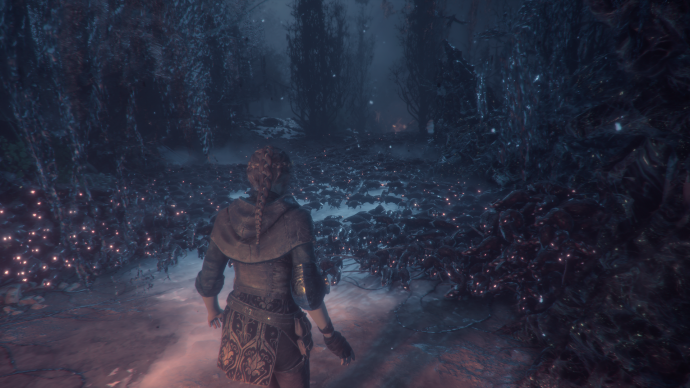 If you’ve seen anything of Plague Tale, it’ll be the rats. A seething, writhing sea of red eyes and wet squeaking that devours anything fleshy it comes into contact with, but fears light. The Rat Tech on display is really impressive; their little bodies tumble and scramble over one another, somehow moving both independently and as one unit, and the noise they make is grating and loud and horrible. As the waves recede before your torches, they reveal stripped, sticky skeletons or half eaten bodies, like bits of an old ship poking out at low tide. A Plague Tale is pretty goth.

But it does well in that it varies the darker scenes, like a rat-infested moonlight graveyard or a farm surrounded by heaps of pig carcasses, with sunlit moments of respite where you and the characters can all expel their tensely held breaths. The same game can look beautiful and magnetically awful at the same time. 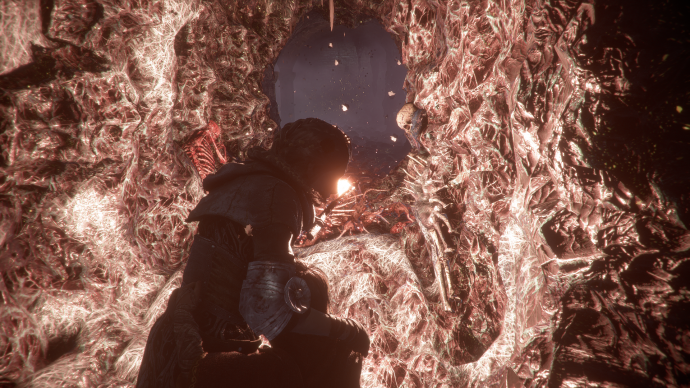 A Plague Tale has a story that’s way more detailed than the escape-to-safety romp I was expecting, involving bloodlines and ancient power, and one extremely evil leader of the Inquisition doing an extremely evil voice. Amicia and Hugo run from the stabby, fanatically religious clutches of the Inquisition into the screeching bitey teeth of the Black Death, with a side excursion into the Hundred Years’ War between France and England, and then back to the Inquisition and plague again. Sometimes all three get combined, and it makes the game an interesting challenge that you can approach in different ways.

Amicia wields a sling, and can collect ingredients to craft alchemical wonders to fling with it. She can light fires, put them out, send the rats in a particular direction with a smelly grenade, get rid of them with a flash of light, throw burning chemical bombs that force soldiers to remove their helmets, or, you know, use regular stones. The stones can kill an enemy without a helmet, but using your sling makes noise. You can also use your person-hands to throw pots or toss stones quietly at metal objects, to draw attention without giving away your position. 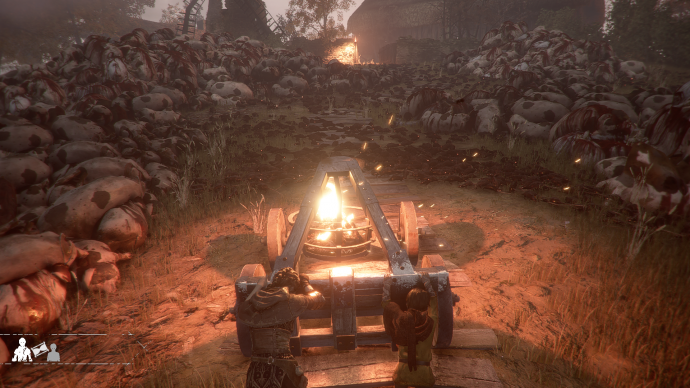 Your job is, broadly, to sneak from one side of an area to another, without getting one-hit-killed by grim adults or a horde of rats. Some puzzles only have one solution, but throughout the game there are many areas that present different routes. So do you want to break that guy’s lantern and see him swarmed by the rats, or draw him away so that you can sneak past? And if you do that, will the rats still be blocking your path? Will that other dude see you? Should you sneak around the outside in the tall grass? Juggling all these elements and deciding what to do is a lot of cautious fun, although the UI is tricky to wrangle with a keyboard.

And for a lot of the game you’re making all these considerations with little Hugo in tow, which is why it’s so useful that he’s such a cool, sweet little dude. He whispers “Yes!” or “Not a sound!” when you boost him over a high wall. In one sequence you’re following an aqueduct and he keeps calling it an “acky-duck”. He sees frogs for the first time and flips out. Exploring the map rewards you with collectibles sometimes, but more often than not you get a conversation with Hugo. Amicia makes a pact that if he teaches her about flowers, she’ll teach him how to use her sling. He’s sad that the ducks he sees wild are the same sort that they eat, and Amicia explains that the ducks eat frogs, and it’s just how life works. Their relationship goes from wary to genuine affection, and it’s one of the most special depictions of a sibling relationship I’ve seen in a game. 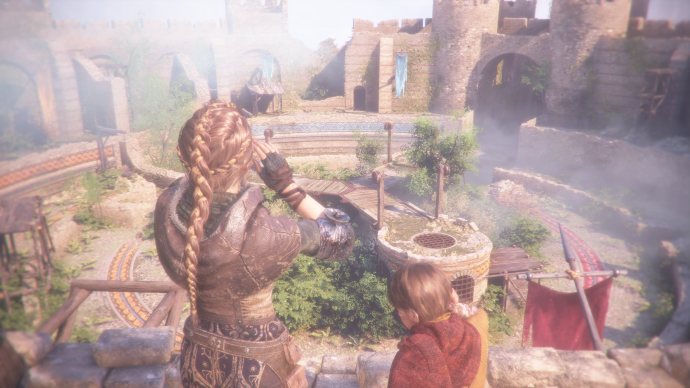 What surprised me, though, is that for a decent chunk of the game, you’re not with Hugo. Amicia accidentally puts together a sort of rag-tag Goonies gang of lost teens and children who have been orphaned, in one way or another, and Amicia approaches some levels by teaming up with one of them or even sneaking around by herself, while Hugo rests at their makeshift new home. In the game-y bits, you have to solve puzzles that require two people, and so Amicia can direct her teammate towards simple tasks. In the story bits, some relationships in the group feel rushed, especially when compared with Amicia and Hugo, but for the most part the emotional payoffs are earned (and carried very admirably by all the voice actors concerned).

I’ve been very positive about A Plague Tale so far, and it is indeed a good game. After a couple of scenes you’ll notice the same corpse models being reused as rat set dressing, things like that, but those aren’t the sorts of things I care about. What does let A Plague Tale down is three boss fights that interrupt the flow of a game that otherwise seems to have a strong sense of what it is. The first is, I suppose, getting you to understand how to use your sling offensively. The second is, likewise, teaching you a new skill. I can allow these. But the third is just annoying. And, worse, funny! It ends up making the rats, who were previously such a malevolent presence, look silly. Come on, man.

I can’t really explain why without massive spoilers, but I do wish that A Plague Tale had found other methods of communicating these moments to players. Would a nice cutscene or ending sequence, in a game that has good voice acting and strong story sensibilities, have done just as well? Yes, I think it would. But I’ll love Hugo no matter what.