According to the Iliad, the sacking of Troy only happened after a very specific set of things occurred in the right order. So, I asked Todor Nikolov, lead game designer at Creative Assembly Sofia, would players have to set up the same set of circumstances?

"You're probably talking about the Trojan Horse?" he replied. HahaHAHAHha yes of course, that's what I was talking about, it would be ludicrous to expect that a strategy game allowed players to plan for and/or orchestrate Achilles sulking and Patrolclus getting himself killed, and then Achilles going grief-berserk over his dead boyfriend. The topic had come up because we were talking about the just-this-minute announce new Total War Saga game, A Total War Saga: Troy. Guess where it's set?

The Saga series of Total War games focuses in on one flash point time in history, rather than spanning decades as the main series of strategy games do. The first Saga was called Thrones Of Britannia and covered the great Viking invasion of our little island. Total War Saga: Troy is about the great Trojan War, the legendary siege immortalised in a really long poem by Homer (who actually acts as your in game advisor, the big mad bastard). 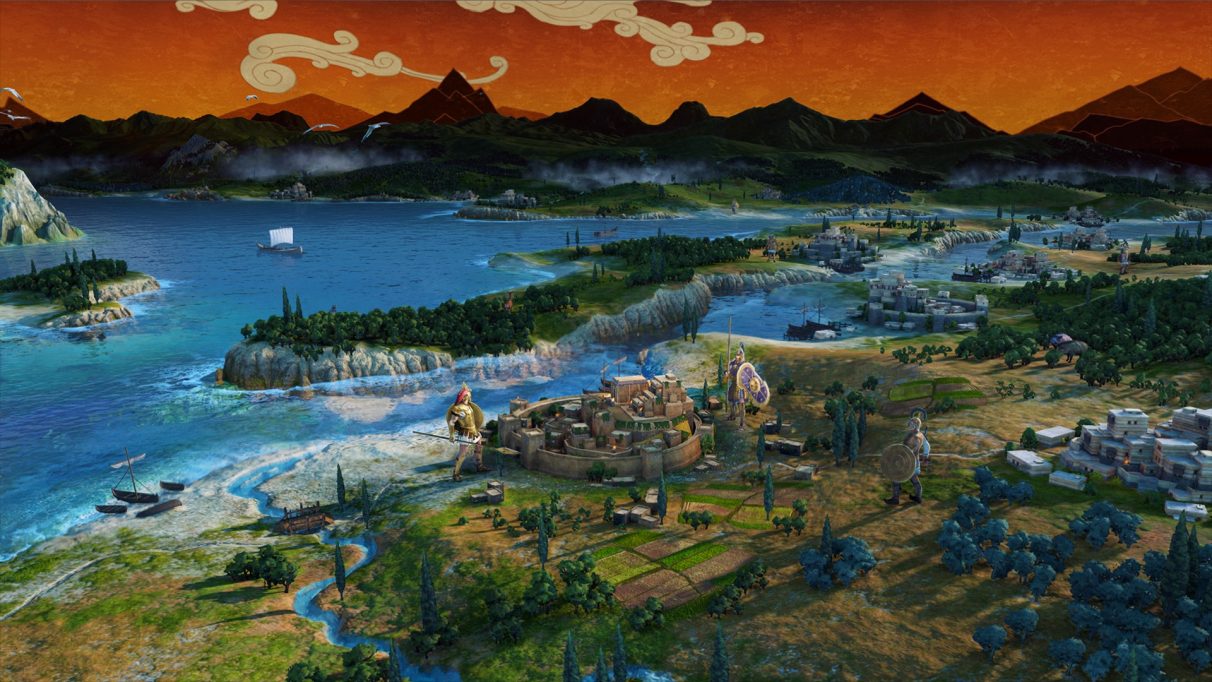 The game starts in the late bronze age, as Paris runs off to Troy with Helen, who was already married to Menelaus, King of Sparta. The phrase 'the face that launched a thousand ships' refers to Helen, because immediately after she buggered off to Troy, a massive coalition of Greeks sailed after her to bring her back to Sparta. It took somewhere between 10 or 15 years. Two massive, diverse armies and a relatively short timespan? A perfect Total War setting, Nikolov reckons.

Troy, whether the war happened as told or not, is interesting to Nikolov because it was one of the only stories to emerge from a dark age shortly after the time period, and it "shaped who they were. The Romans believed they were descendents of refugees from Troy. So, it's an immensely important story to tell."

There is, Nikolov explained, quite a breadth of archaeological evidence from the period -- the game's battle map of the city Mycenae is placed on the real life site -- but what they lacked was characters. That's where the Iliad comes in. 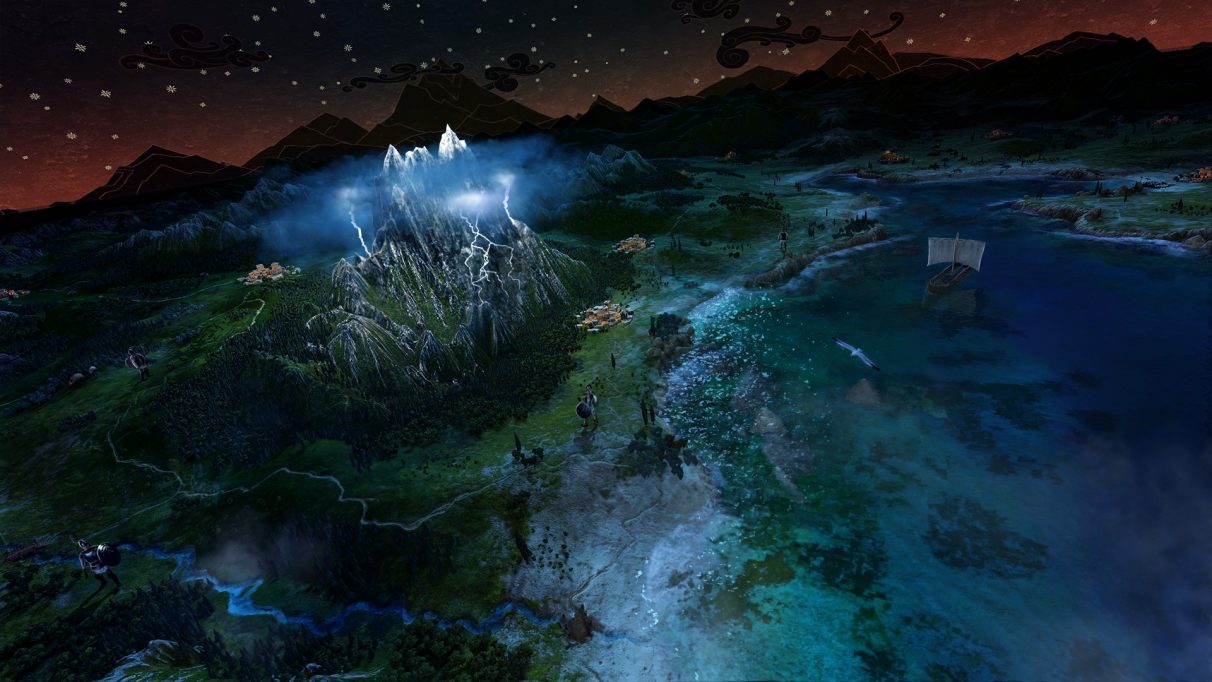 The Trojan War is wrapped up almost inextricably with the myth, but Creative Assembly are taking a sensible approach, "the best of both worlds", by trying to imagine what the truth could be that gave rise to such myths. This is represented by the campaign map, in which the shroud (Total War's version of a fog of war, sort of) represents the layer of myth, and has lines from the Iliad written on it. It burns away as you advance your campaign. Combining the two aspects of Troy in this way is, Nikolov said, "the only appropriate way to retell the story of the Trojan War."

Troy has all the usual bits of a Total War game, with the battles, the territorial conquests, the real-time sandbox fights and so on, but with a more… Troy-y flavour. The heroes, who can do exceptional battle feats, include fan favourites like Hector and Achilles. There are eight in total, four for each army.

Each has two abilities assigned to him. Achilles has 'Hot Blood'. He's governed by his emotions, so if he's enraged he does more damage, but settlements produce less; if he's insulted, he'll suffer penalties but his units, the myrmidons, fight harder to cheer him up. So, not too far removed from grief-berserking, then. Heroes can also issue challenges to each other, locking both up in one on one combat as the battle rages around them.

We were also shown the Minotaur, not exactly a Hero, but close. In the myth, the Minotaur is a monster with the head of a bull, who eats human flesh and is kept imprisoned in a maze. In the game, he's a mighty warrior who wears a bull's skull and pelt as a helmet and cape, who charges ferociously at the enemy.

Mount Olympus exists, and you can earn the Favour of gods, as well as their disapproval, but in a sort of… psychological way, in-keeping with the idea of revealing the truth behind the myth. So, if your troops think they have Ares on their side, they'll fight better. There are seven gods to keep an eye on in all, running through Ares, Hera, Athena, Aphrodite, Apollo, Poseidon, and back to back world adultery champ Zeus. 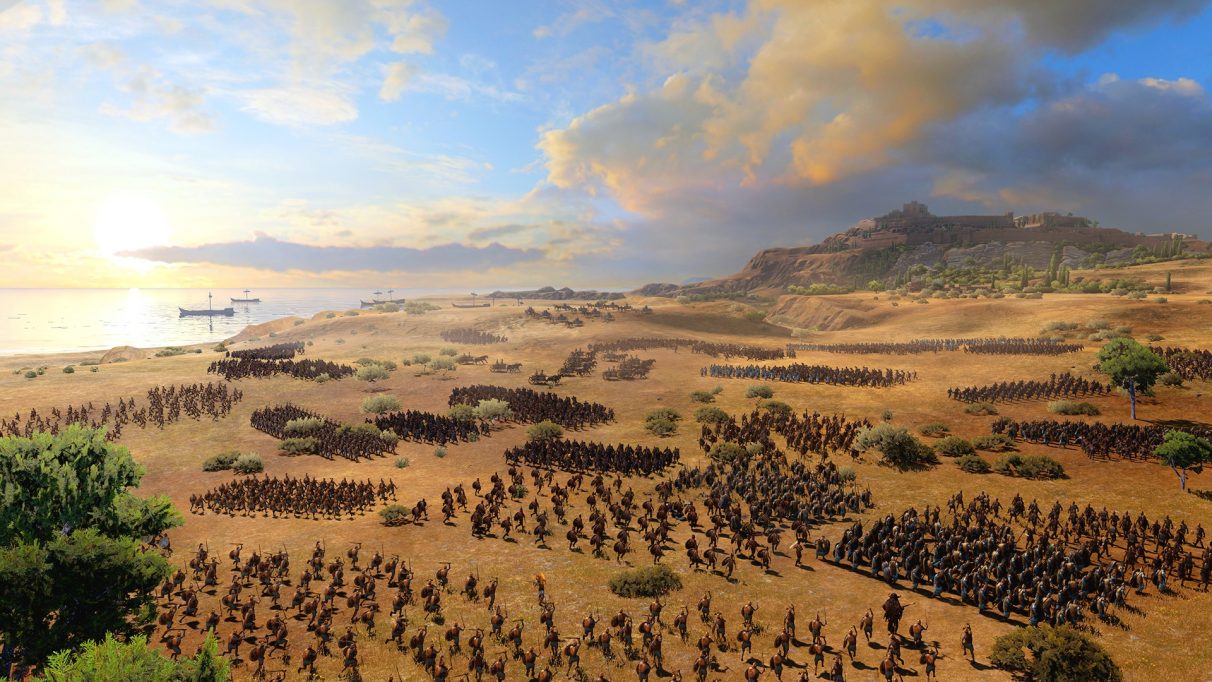 Most of the actions you take during your normal course of playing will gain or lose you favour. "For example," said Nikolov, "Ares is pretty straightforward. He loves bloodshed. If you win a battle and you capture some people, if you decide to kill them, Ares will be happy! If you decide to not engage in battle, or if you flee from battle, Ares will dislike you." But you can also have priests perform rituals, positive ones in your settlements or negative ones in others, to alter the flow of Favour, which is all tracked on a bespoke UI.

On the historical side, there's a multiple resource economy for the first time in a Total War game, comprising food, wood, bronze, stone and gold -- five resources instead of one, reflecting the period's economy.

The team also had to think about how to compensate for the different troop types of the time. There was a distinct lack of cavalry, for example, as horses were reserved for chariot troops. To keep battles interesting, they've strived to make greater distinctions between infantry troops, like heavy spears who are defensive, but much slower than some faster assault troops. Other units are immune to flanking, or psychological tactics, or change their weapons, stowing their shields for a more effective charge. Also keeping you on your toes are two new terrain types. Certain units can hide in tall grass, while others will be slowed in mud.

The aim is for "very varied battle gameplay," where you have to think tactically about which units can stand against chariots, or are quick enough to move out of the way, or perhaps can attack from a distance.

If this all sounds like a lot, don't write off this Saga just yet. They are apparently putting a lot of effort into tutorialising Troy, as Nikolov admitted that "obviously, Total War is a very complex game to get into. It takes a lot of time to learn all of the mechanics." They've been inspired by Three Kingdoms, and have introduced a version of the information overlay in that game. There's also a series of scripted tours to guide you through all the multi-step processes, tutorial battles incorporated to the campaign, and of course Homer will always be yakking on at you. Classic Homer. 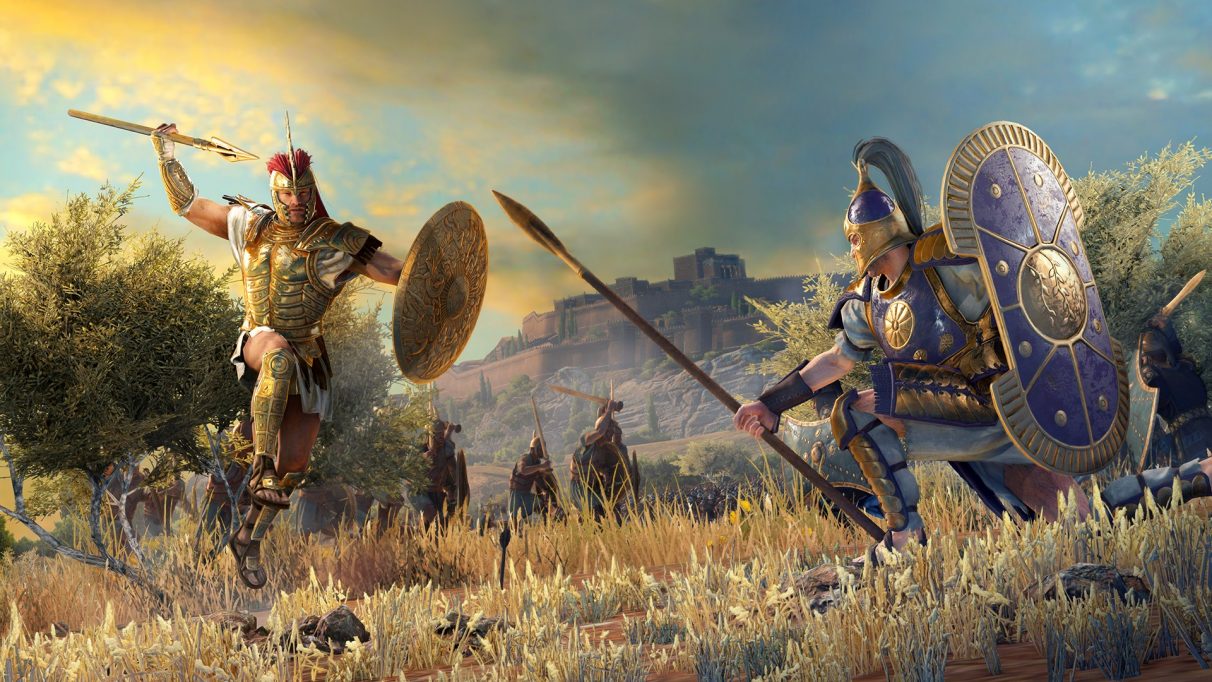 Depending on the route you take, though, even experienced players may never see Troy fall. If you play as Hector, and you're good at it, says Nikolov, you'd never let Troy be conquered. "I imagine you'd even take the war west over the sea to Greece and sack Mycenae," he added.

And what of that pesky Trojan horse? There are a number of theories as to what it could actually have been, one of which goes, roughly, that horses are the symbol of Poseidon who, as well as being the god of the sea, is "the earthshaker", as Nikolov tells it. There are archaeological remnants of what is believed to have been Troy, and they show that the city was besieged, and that an earthquake coincided with the siege. So maybe the horse was, in fact, a natural disaster.

"At certain times an event will strike where Troy will be hit by an earthquake. Buildings will be damaged, the garrison will be severely depleted for a set amount of time," Nikolov explained. The city will be vulnerable during these windows of opportunity, so it's important to pay attention to them whether attacking or defending.

I didn't get hands on with the game, and was only shown a small bit of real-time battle footage, but I have to admit that this kind of makes more sense than a bunch of men hiding inside a big wooden statue, and the Trojans thinking, "clearly the idiot Greeks have left this as a lovely present to us, the superior warriors!"

But if the game arrives in 2020 and Patrocles isn't in it, we riot.