AMD's new Radeon 7 graphics card launches worldwide in just three days time on February 7th, and from what AMD have said so far, the world's first 7nm monster card is set to be a potential RTX 2080 killer. I'll be bringing you my full review on the 7th to see how that claim holds up in practice, but in the mean time, I thought I'd take a tiny peek at the card itself, because even if it doesn't end up being better than Nvidia's RTX 2080, the stand that came in my press box means it should at least make a mighty fine doorstop.

Alas, this glass GPU stand won't be available in the regular Radeon 7s you'll be buying in the shops, but it would seem graphics card presentation is the hot new thing for GPU launches these days, as you may recall that Nvidia's RTX boxes function in much the same way, with the graphics card orientated in an upright position like you're lifting the lid off a Michelin star dinner - albeit in cardboard as opposed to a glass plaque.

Still, silly stands aside, from a pure design point of view, I think I actually prefer Nvidia's RTX cards over AMD's silver slab look. Yes, the Radeon logo down the side and the little, semi-translucent R cube on the corner are infinitely more preferable to my 'red is best' colour sensibilities, but as much as I like the Radeon 7's diamond cut edge and subtle bronze highlights, its plain silver chassis just isn't nearly as eye-catching as Nvidia's black and silver RTX combo.

You'll also notice that despite the Radeon 7 having three fans to its name, the number of individual fan blades on them is actually lower than what you'll find on the dual fans of the RTX 2080. Whereas the RTX 2080 has 28 fan blades, the Radeon 7 only has 27. It's too early to say whether one fewer fan will have any noticeable impact on performance, of course, but it just goes to show that more fans doesn't always necessarily mean better fans.

The Radeon 7 also lacks a USB-C output. It's not the end of the world, admittedly. You'll still find three DisplayPorts and one HDMI here, just like the RTX 2080. But the absence of that extra USB-C output means it's still a fraction less flexible than its RTX rivals, especially when it comes to VR. After all, the main reason why Nvidia's included a USB-C port on their RTX cards is so they can take advantage of the upcoming VirtualLink standard, which promises to deliver all the necessary power, video info and data over a single connection rather than the many-cabled warrens we deal with currently.

Again, it's hardly make or break for all the non-VR users out there, especially when AMD seem to be positioning this card as something that's going to be as much for professional video content creator bods as it is for enthusiast gamers. Case in point is that ludicrous 16GB of HBM2 (2nd gen high bandwidth memory) it's got, which is twice as much as you'll find on AMD's current top-end card, the Radeon RX Vega 64. No one needs that amount of video memory for playing games right now. 8K video editors, on the other hand, might say otherwise. 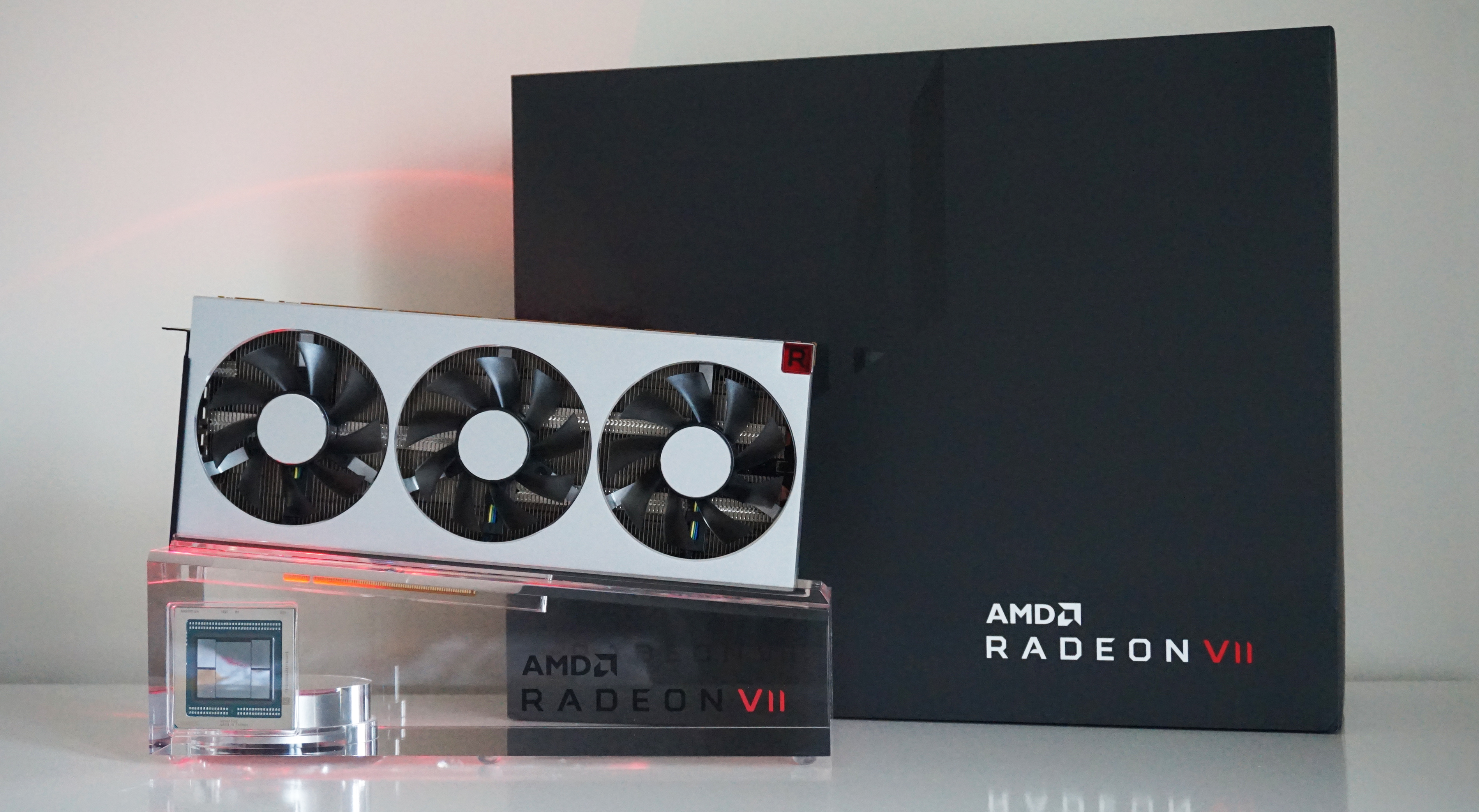 Still, the proof of whether the Radeon 7 will graduate from its current doorstop status will be when my review goes live on Thursday, where I'll be putting it through its paces in my regular suite of gaming benchmarks to see how it performs across every resolution going, and whether it's got the chops to break into our best graphics card list. I'll also be doing a separate, more detailed comparison piece between the Radeon 7 and RTX 2080 with some lovely graphs and the like, either on Thursday or shortly after, so keep them peepers peeled, folks.