If there's one game that has, for me, defined my last few years at RPS, it's American Truck Simulator. That singular nexus of deadly serious simulation and twinkly-eyed, chill-out road trip has helped hold me together at times when both the world and my own world threatened to fall apart, but it's also been a belated lesson that games need not be defined by skinner boxes and power fantasies. The magic of the ordinary, but the ordinary transplanted to another place, free from all pressures. Most of all, the peace and freedom of the road.

It's now time for me to say goodbye, to RPS and perhaps to the overall business of writing opinions about videogames. There's only one way to go out.

One last drive. And, thanks to some very kind folks at ATS developer SCS, I get to make that last drive in a work-in-progress build of the forthcoming Washington DLC - the state I've long been most desperate to drag 18 wheels across. 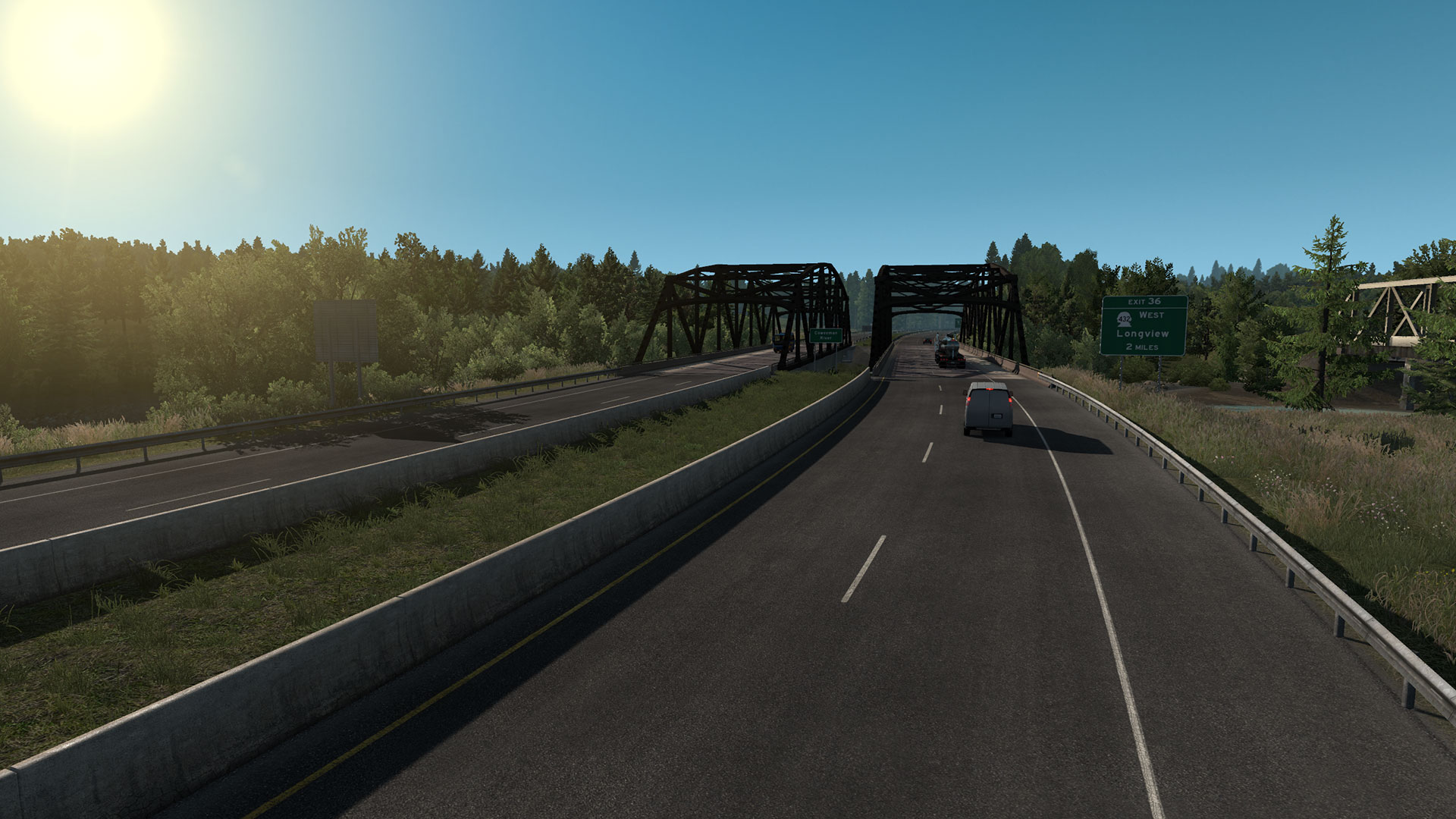 I should say first that the Washington State code provided to me is early and very much work-in-progress - please bear that in mind when you see the screenshots and video in this post. I'm getting a sneak preview of what's to come, not the experience of a completed build. Hence, no judgements here. Even so, it's very much what I was hoping for. Not just from the Washington DLC itself, but from ATS as a whole, since those first days touring relatively pint-sized recreations of California and Nevada. Scale and beauty, tarmac and trees, peace and engines.

Truck Simulator games are sold on their cities, on the implied scale and complexity from name-dropping California, Las Vegas, Portland and Seattle, but all those cities have ever meant to me are endings. I go in search of trees, mountains, valleys and rivers, the silent tourism of the rolled-down window. 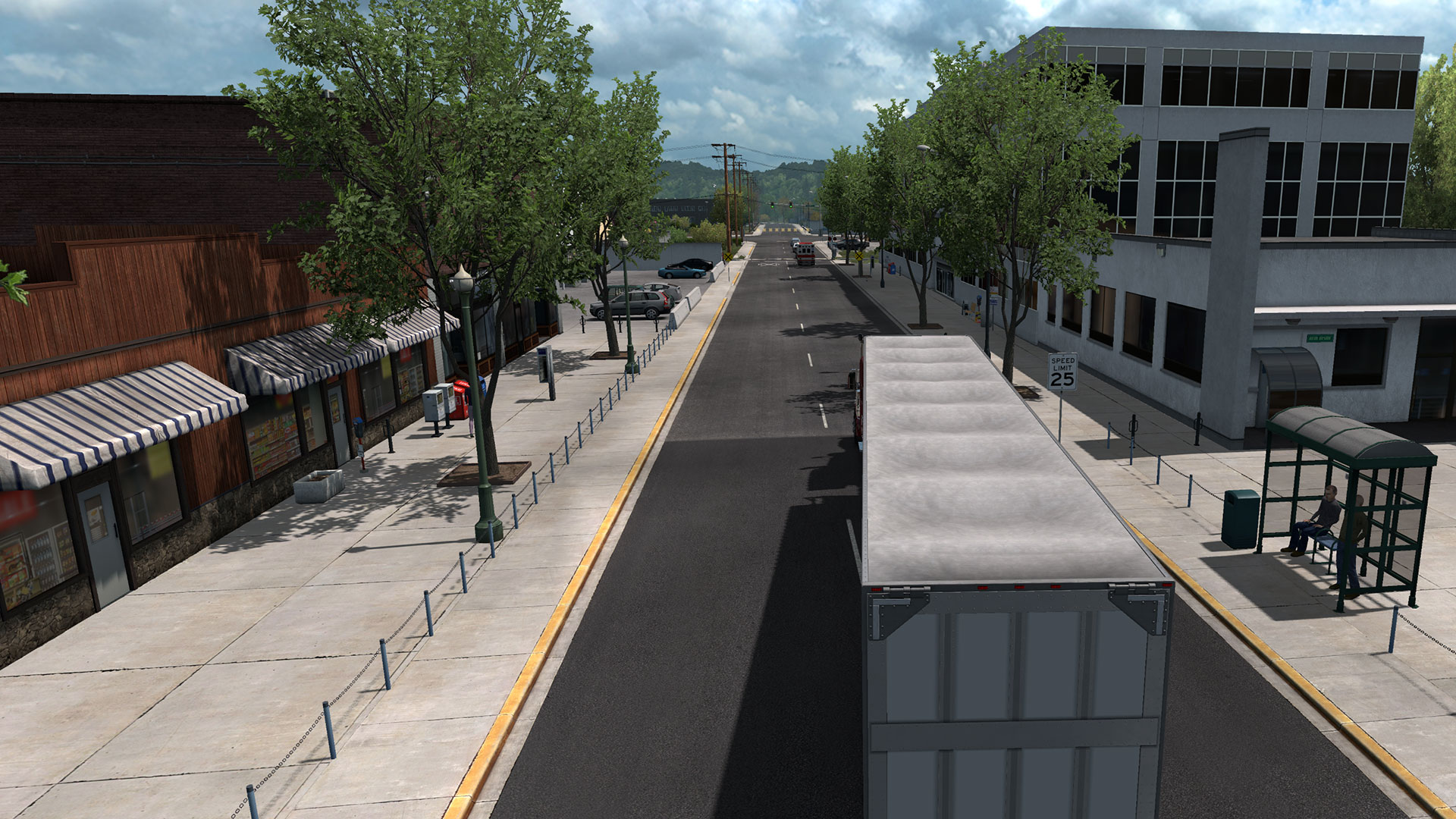 Cities, with their intersections, traffic lights and 90-degree turns, are a not entirely welcome necessity: the places I begin at, the places I must end at. Every delivery has a destination, and every destination is in the city.

But the power of the cities is in my escape from them: if ATS were all trees and mountain roads, there would be none of the relief I feel when the cramped road finally widens, as the buildings and lights fade into vanishing points in my mirror.

Clear the road, clear the mind. Onward, to the trees. 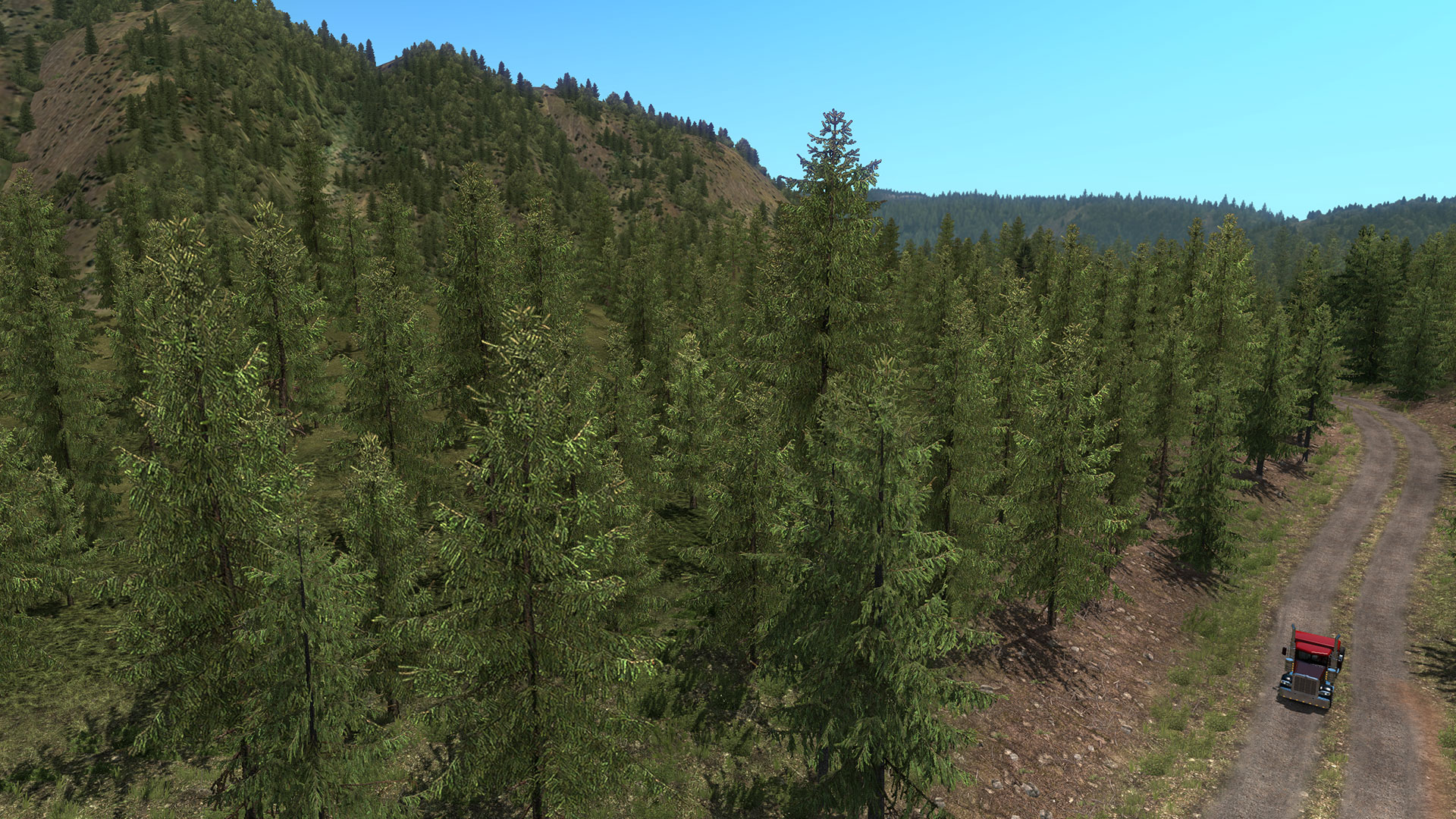 Washington State means Twin Peaks to me, and Twin Peaks means a lot to me, one of the main reasons for which is trees. Trees as wonderful, terrible custodians of daylight and darkness both. I want to go to the trees whenever life's fingers squeeze a little too tight around my throat. But I live in a city, and I have two young children and a job, so I have to content myself with the small, smoke-choked one that sprouts out of the traffic calming island outside my window. It is not enough.

But there is American Truck Simulator. Its trees are not, in truth, the best trees in the business, but they are trees in the right places, trees at the right, monumental scale, and most of all trees that go on and on as I drive past them on midnight roads, sunrise-lit roads and rainy afternoon roads. 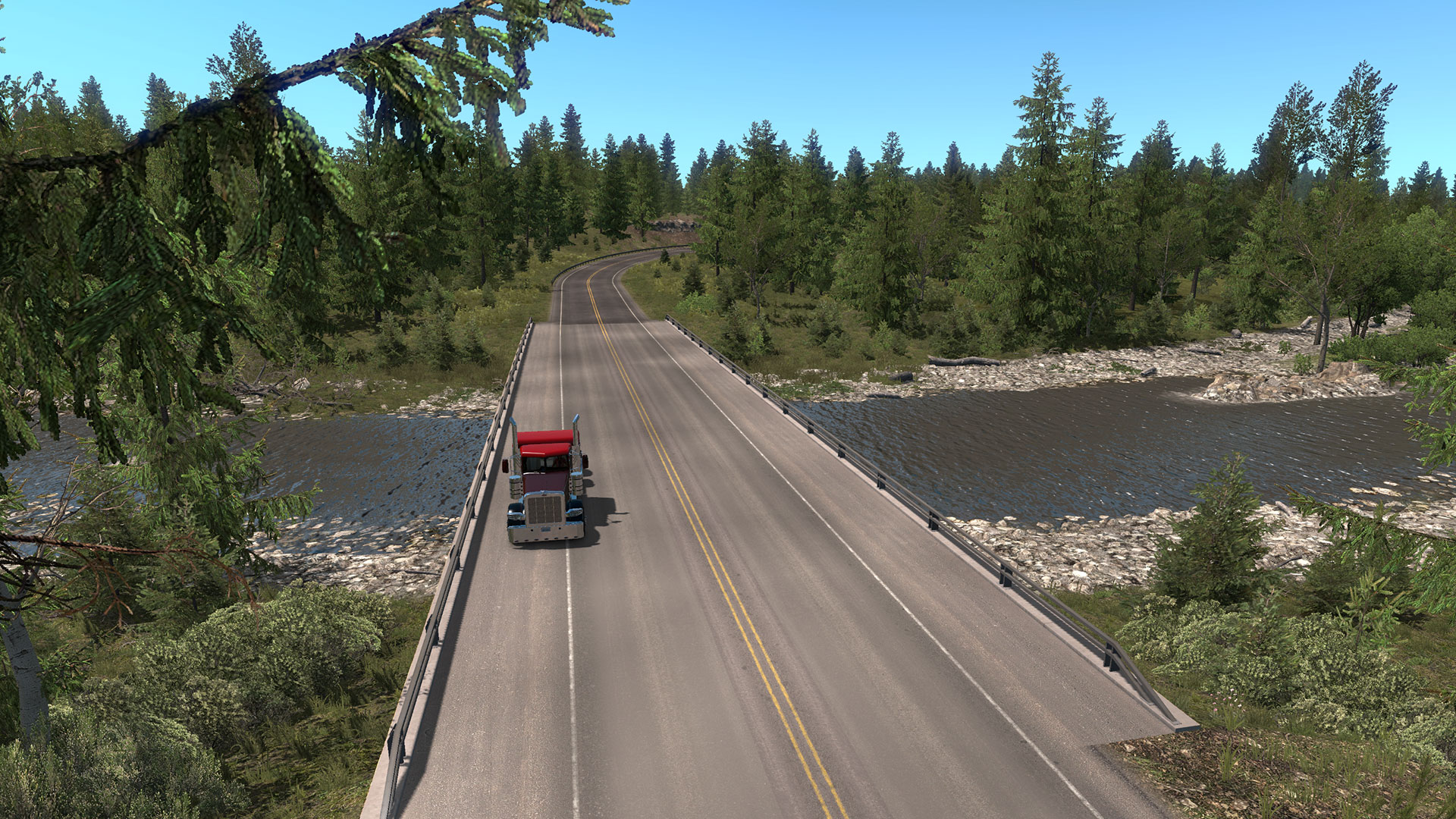 Many parts of America are defined by forests, but Washington State was always going to be the culmination of American Truck Simulator's trees for me. I thought I'd have to wait so long, that with rocks and shrubs so well-established the Texas trawl was surely inevitable first.

My breath caught in my throat when Oregon was announced after New Mexico. A road to my trees had opened.

And next, Washington. The trees, those endless dream-of-freedom trees I have long seen in my dreams, fuelled by Lynch and Frost's nightmare fuel yet aspirational television since late childhood, renewed with gut-punch force by the remarkable Return last year. 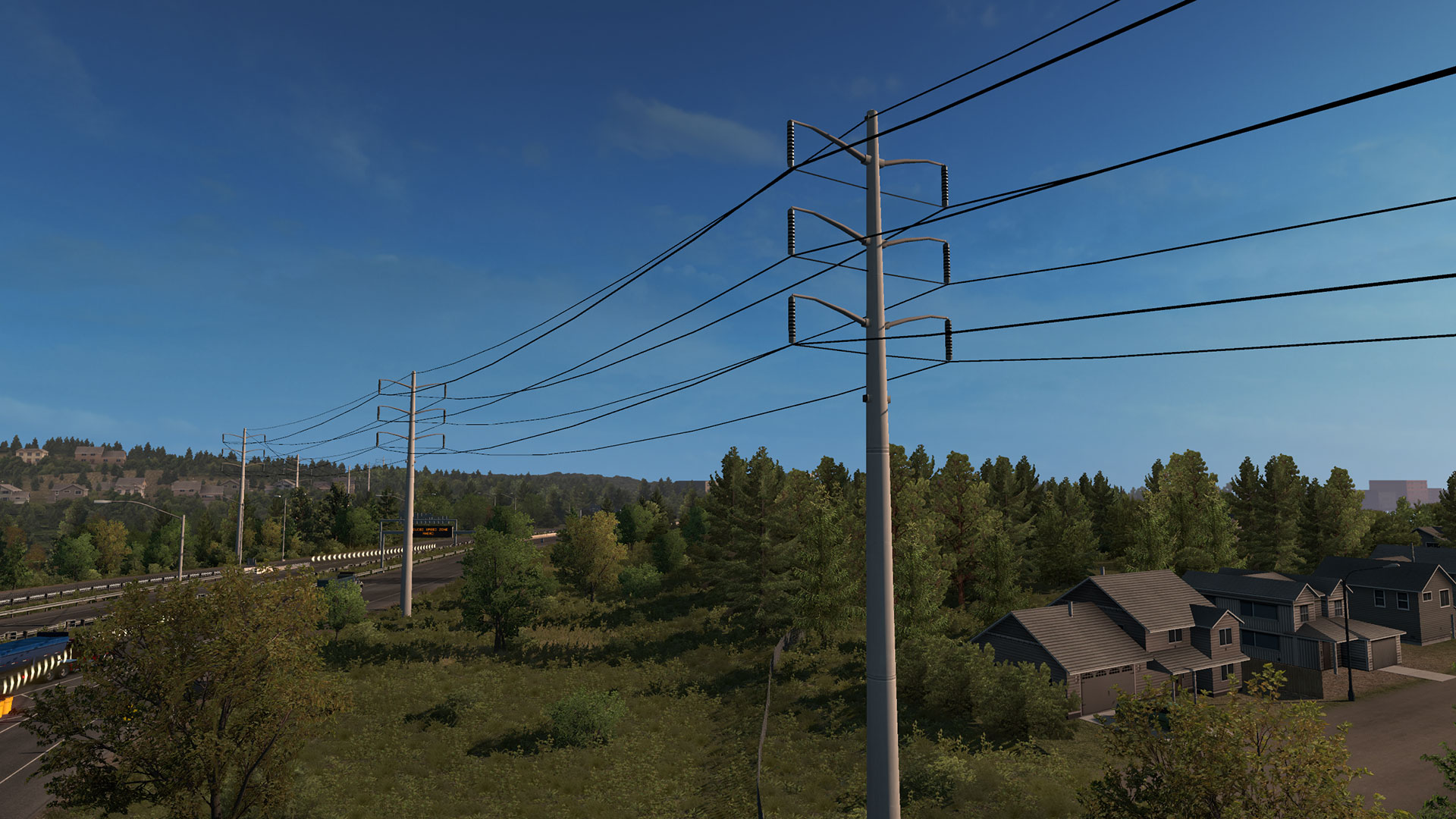 Washington isn't just forests, not by a long shot. There are cities large and small, rivers and mountainsides, plains and fields and, obviously, a whole lot of tarmac. But it is defined by trees, and how forests break suddenly to show water or concrete. My ATS screenshot archive is already thousands-strong, but after just a day in Washington it's almost doubled in size.

The logging road near Bellingham, in the far north of the state, is everything I've dreamed of from American Truck Simulator since the start. Bumpy and winding, dirt not tarmac, snaking around around a mountain, straight through dense forest on either side, until it suddenly breaks open into plateaus and the best views in the state.

Nominally, this is purely a work road, there to enable log collections and deliveries, but what it's really doing in ATS owning its second-string. Sight-seeing, escape and beauty, now fully away from the freeways and the traffic, just me and my truck and the trees. Driving simulator as walking simulator, a high-speed hike through exactly the kind of place I always go to in my mind's eye whenever the walls close in. Tree-lined bliss. 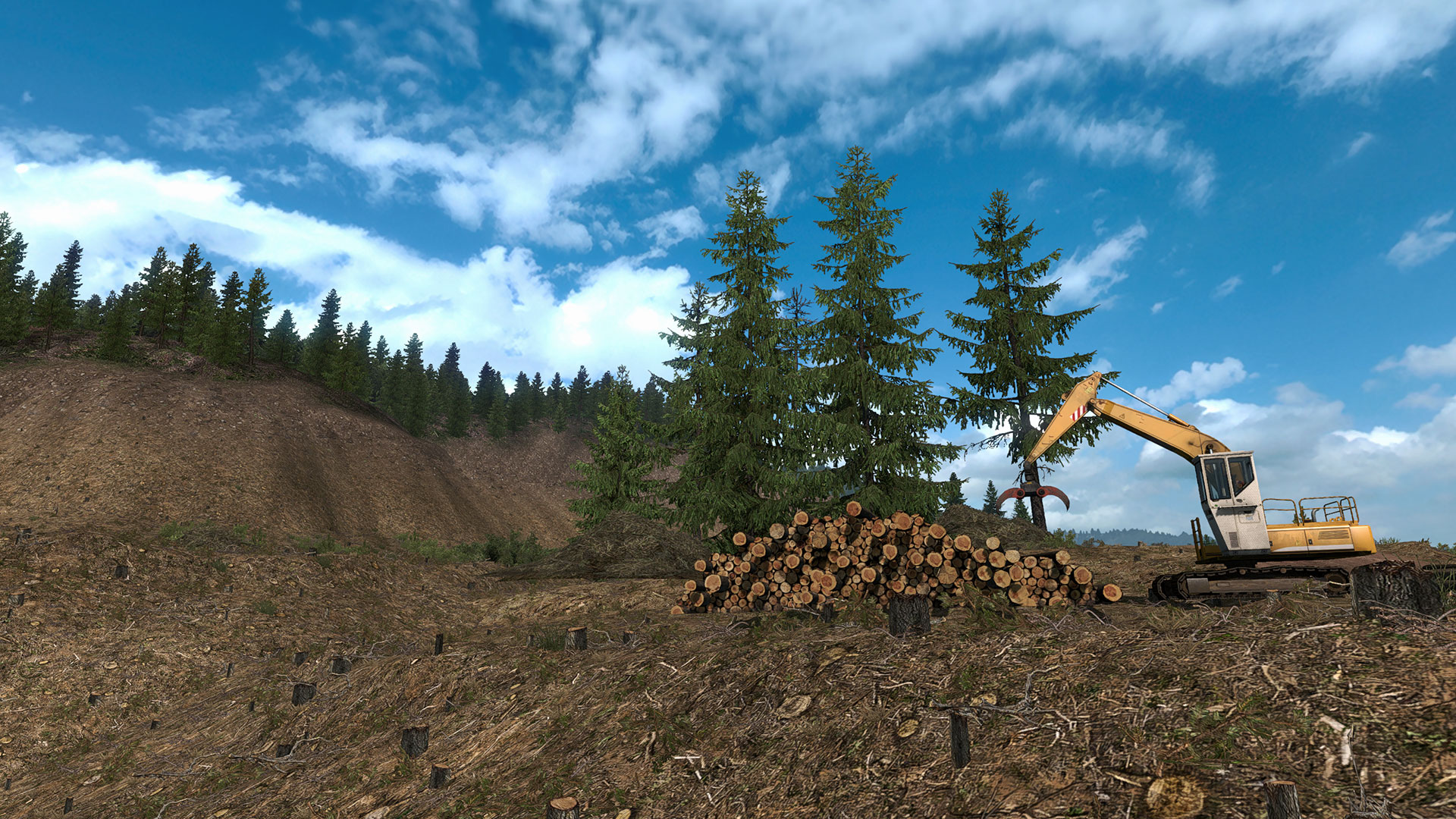 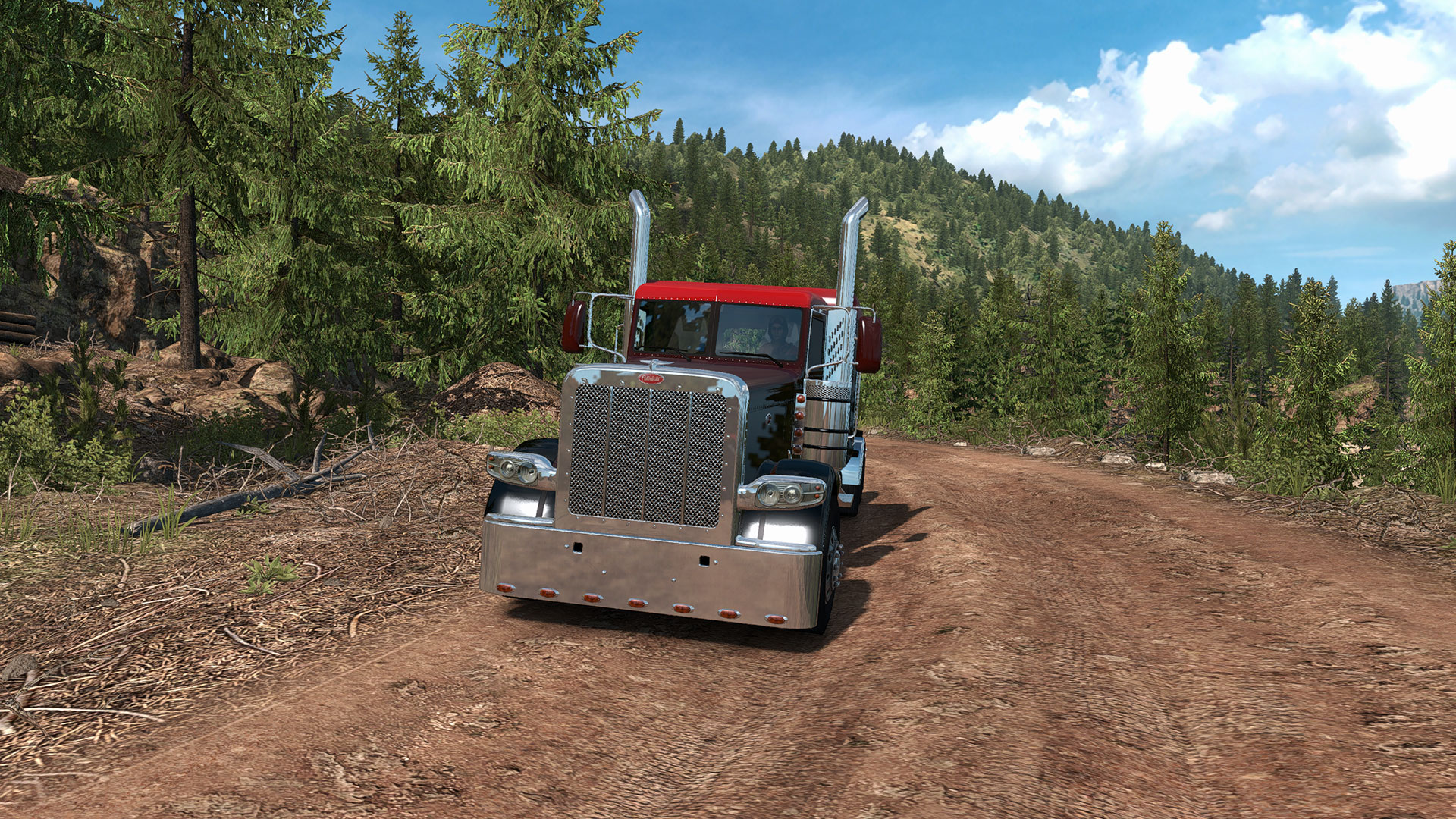 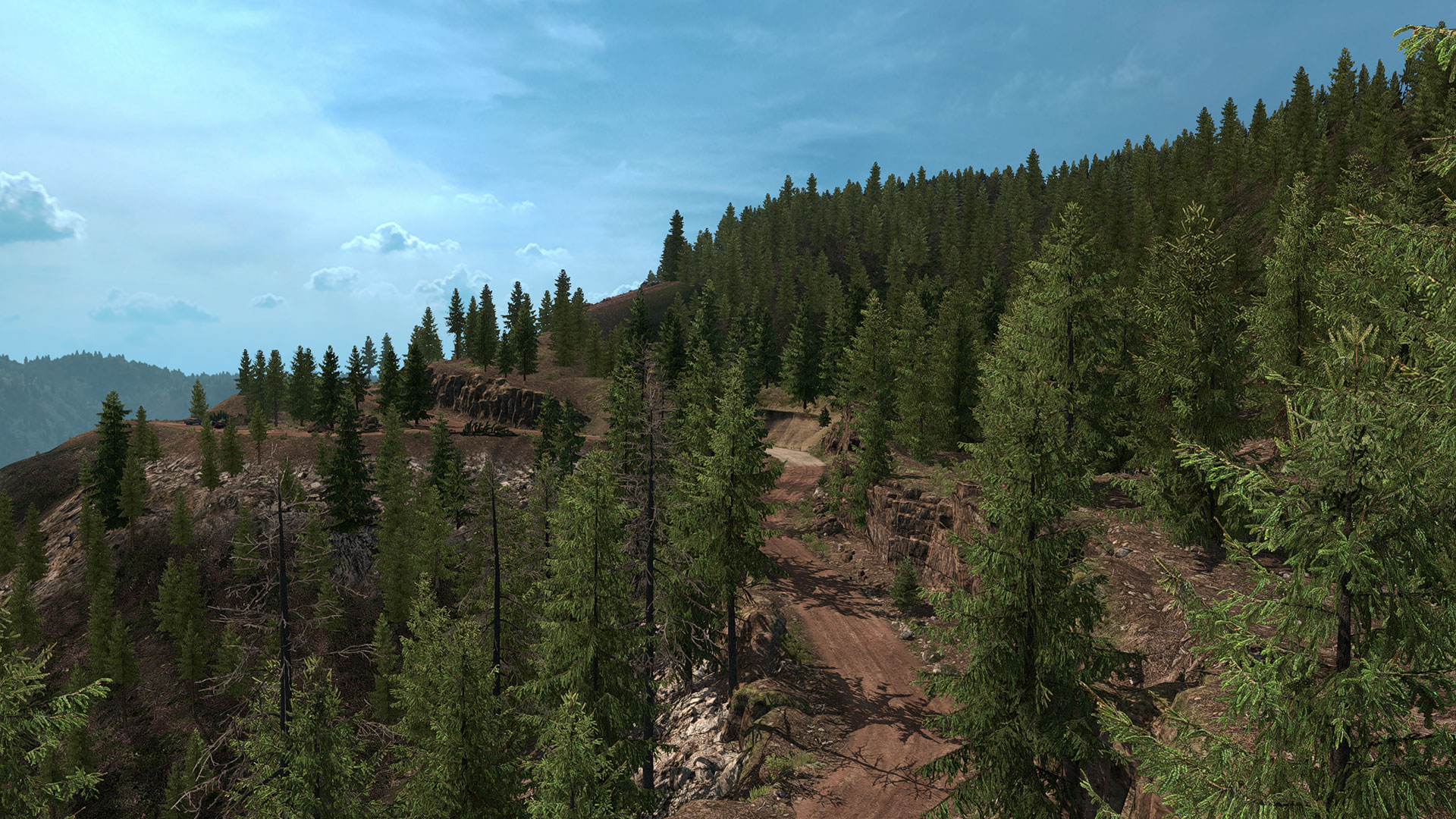 But I was also struck by Seattle, which is not the squat, compressed conurbations of so many other ATS cities, but instead a gleaming jewel of modernity that provides an immense backdrop to my escape into the woods. As always, a city is not my favourite drive, but in terms of city as scenery, this Seattle is a mecca that particularly calls to me, that manages to tear my mind away from dreams of pines and furs and into a yearning for an ending. The city! The lights, the bustle, a sense of home. A place to leave when it all gets too much, a place to come back to when the road grows too long. 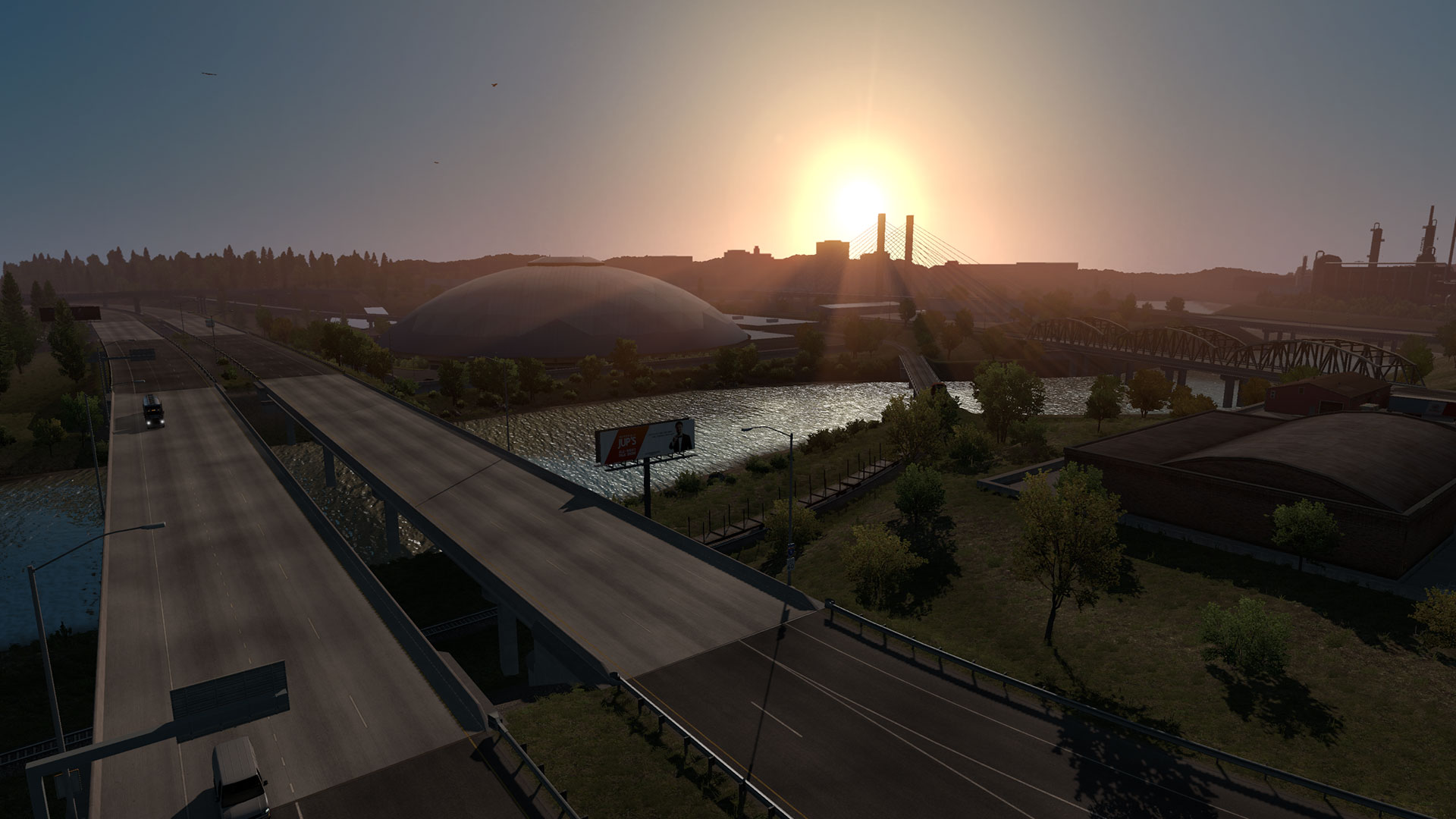 The city and the trees. The silent splendour of the lonely voyage between them. The relief of escape and return. Thank you so much, American Truck Simulator, for what you have given me these past few years. Travel journalism to semi-real places. Peace and purpose from behind an imaginary but tangible wheel. One day soon, I shall drive from Hobbs, New Mexico to Bellingham, Washington. It will take hours. It will be exhausting. It will be perfect.

Before all that, there was one thing I had to do. One thing I was not sure would be possible, was terrified would not be.

Snoqualmie Falls, the Twin Peaks waterfall. Famous, but famous enough, and roadside enough, to be included in this semi-compressed virtualisation of Washington State? I looked at the in-game map, compared it to real-world maps of Snoqualmie. Many roads missing, so much land excised. It seemed so unlikely.

Grimly, I turned onto the I-90, the only road that came anywhere close to where the falls could be. I drove and I drove and though the woods were beautiful, there was no space for a forked waterfall. 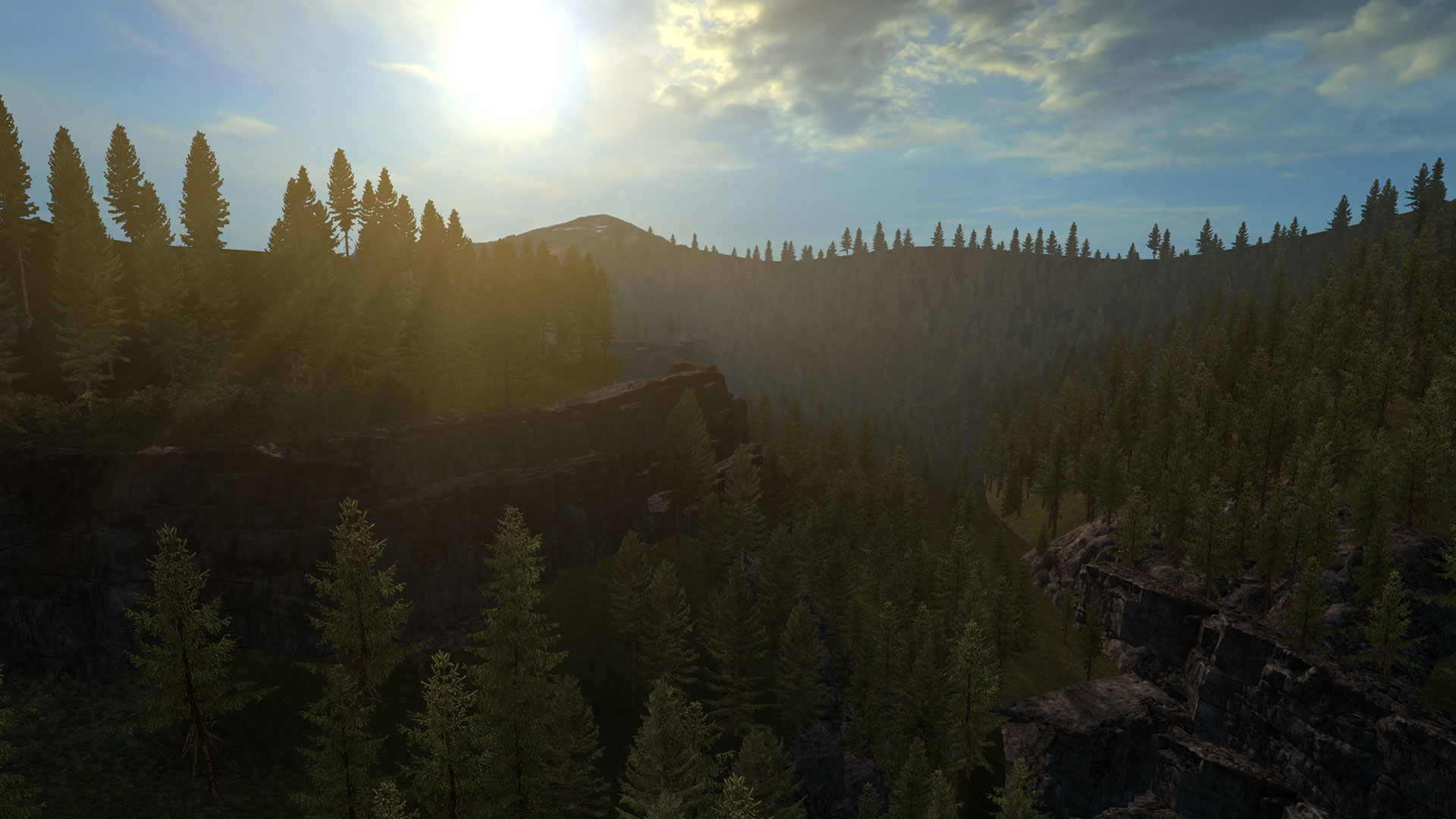 Then the ground beneath the road fell away, replaced by towering concrete struts. The land had parted. And, in the distance, a sense of froth and mist. 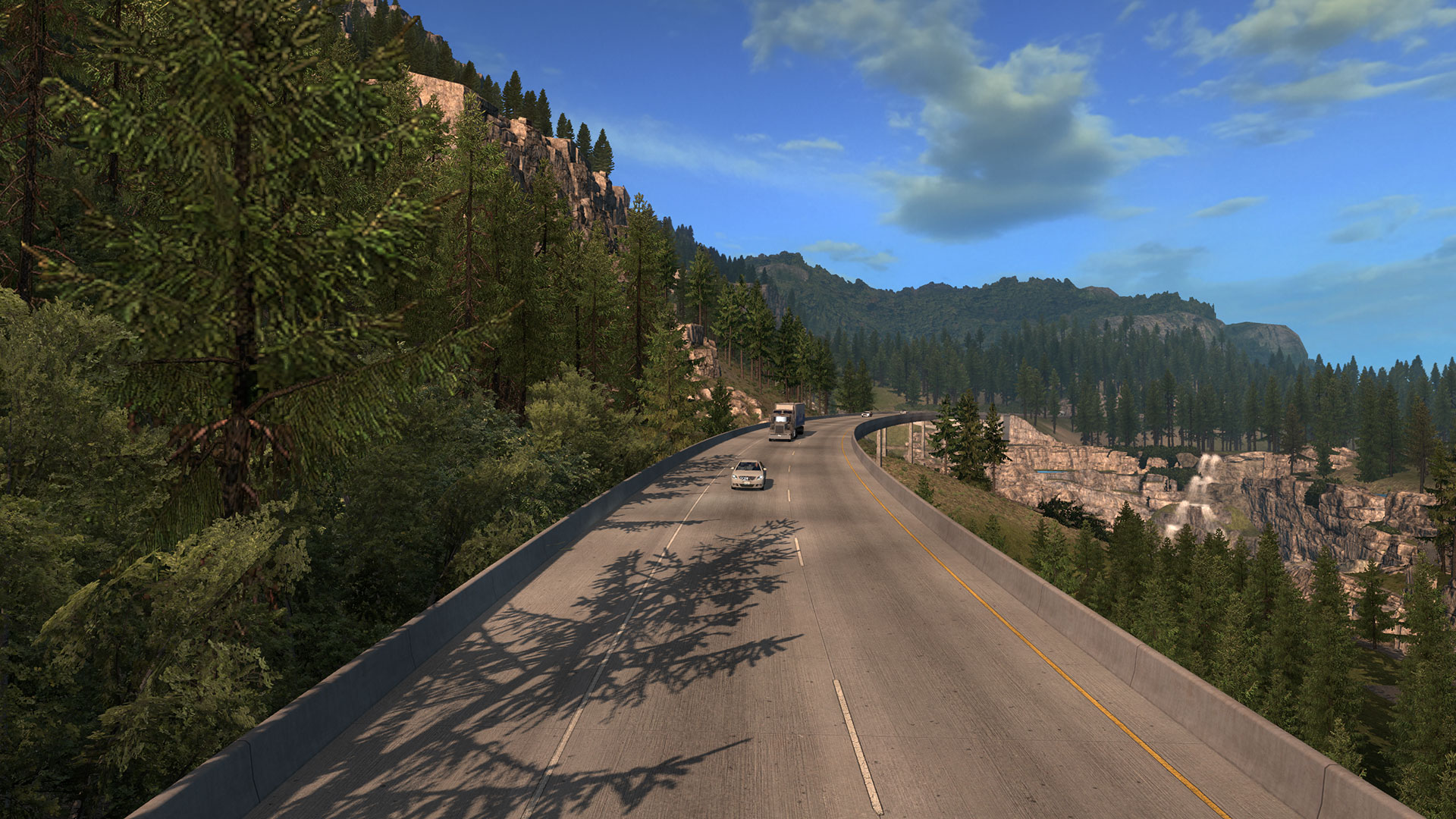 Falling water. Twin streams of falling water. The gatekeeper of a place where a made-up man named Dale once came to be free, only to lose himself instead. I have always wanted to go there, to do both. 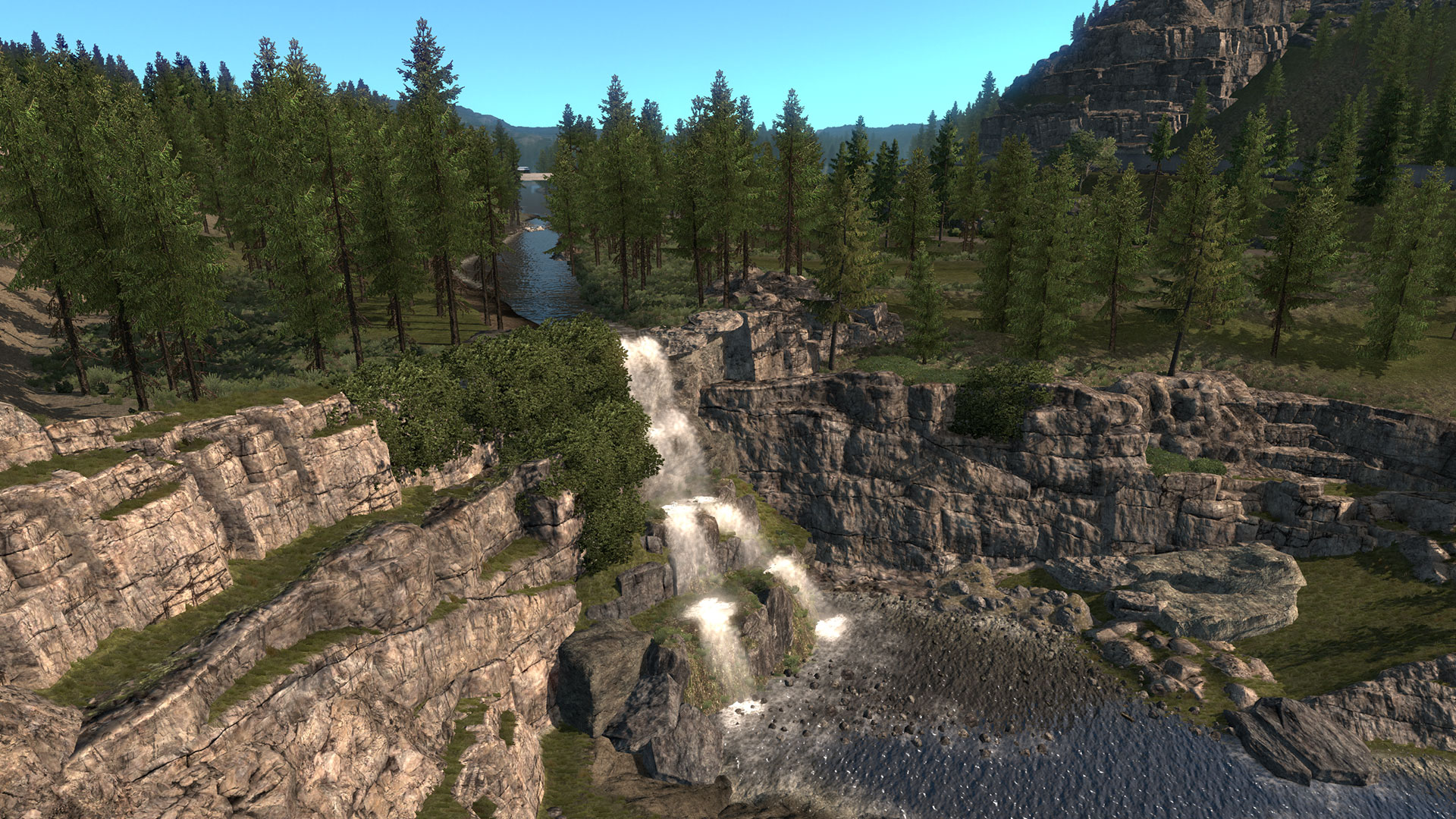 Sat alone at his personal computer, a plastic gamepad in his hands, his face blue-lit by the flashing pixels of his monitor, a 40-year-old man wept as he witnessed a digital recreation of an American waterfall he's been seeing in the back of his brain since 1990.

Videogames and television. Silly things. They shouldn't mean so much, but, sometimes, they really do.