If you click on a link and make a purchase we may receive a small commission. Read our editorial policy.
Among Trees
Though there's more to come, Among Trees is already a peaceful sandbox where you can fish and cook and hide from slightly janky bears.

I don't usually like survival games. I like the idea of survival games - the idea of making a safe home out of the wilderness and learning to make my own boots out of rabbit skin, and so on. I would never be able to do this in real life, obviously, because I am small and fragile and I don't really enjoy even the most glamp of glamping. Sadly it usually turns out that I can't do it in games, either.

But Among Trees, a woodland survival sandbox released into early access during this year's PC Gaming Show, is different. It doesn't seem so hostile. And, joy of joys, it has three different difficulty settings and a "Zen" mode that removes dangerous creatures like bears. For the hardened survival game veterans that might be a turn off, but for me it means Among Trees is a game that can be many things to me when I need it. And you don't have to make it easier; you can make it harder if you want. Fill yer boots with poisoned mushrooms. Except not, because the harder difficulty makes food more scarce.

Currently what happens is, you wake up in front of a ruined cabin, gather some scattered plants to rebuild it, and begin to cautiously explore the forest around you. It is a beautiful forest, full of animals who seem to be specifically programmed to pause for a second so you can catch a glimpse of them before flying away, or hopping into the bushes. There are fuck loads of rabbits and woodpeckers, but the majestic stag is glimpsed but rarely, and I feel genuine reverence when it happens. 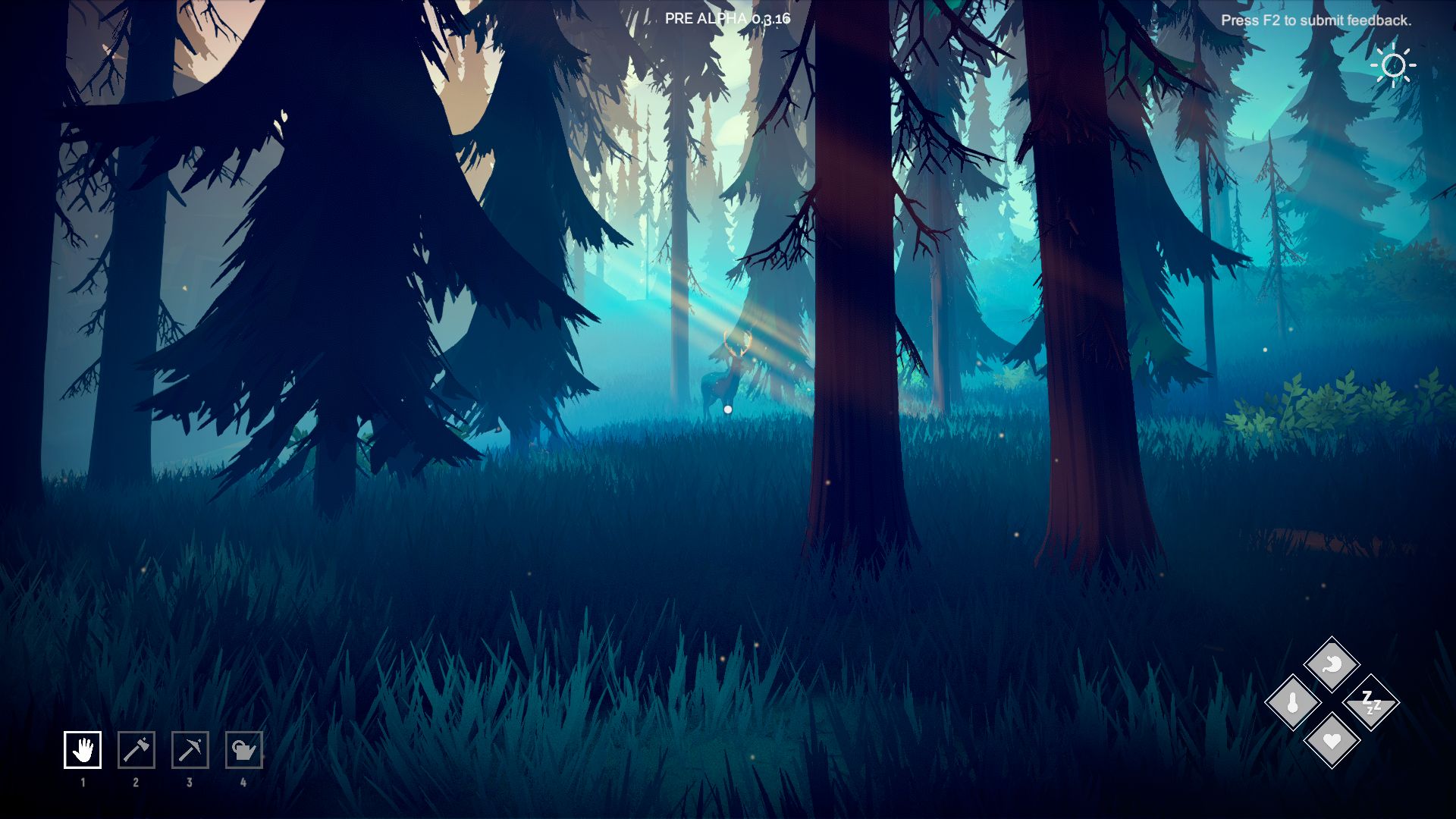 In addition to animals, the almost wholly peaceful forest, only occasionally disturbed by rainstorms, is full of really great mushrooms, mosses, berries, the telltale buzzing of bees (similar to the telltale heart in that sometimes you can hear them but cannot see where the fucking hive is and run around the same patch of trees for ages, driving yourself to distraction) and other natural resources to craft ropes and axes and maps and more annexes for your home. There are also collapsed, ruinous towers that look almost like collapsed fire lookouts, sticking up in the forest like broken teeth, surrounded by man-made things like nails and screws. In this way you progress from stuffing cold, uncooked mushrooms into your dry mouth to stop yourself dying from starvation, to having a second floor sewing room and a greenhouse next to your kitchen.

This progress is gradual but consistent (at least until you butt up against the limits of the early access build), and the game does some interesting things to breadcrumb you from one thing to the next. Once you've built your crafting room, cooking room and storage loft, all using materials you can find close to home, you want to build your greenhouse, and for that you need some mineral deposits and a specific kind of tree sap. 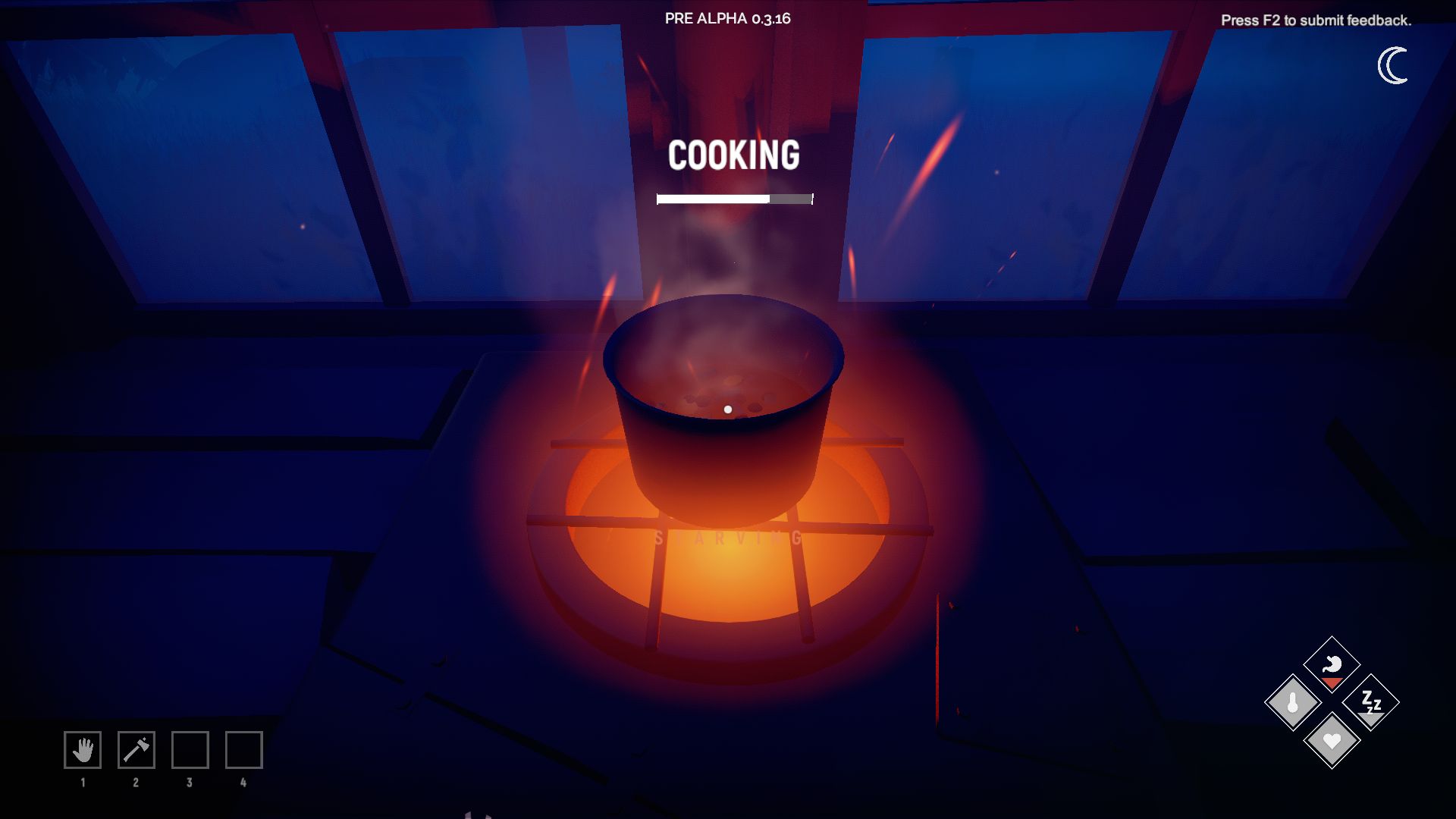 Ah, the bears. The map in Among Trees is deceptively huge, and until you craft the map from rags and blackberries (??) you're going to need a good sense of direction to remember where things are - except for your house, which is always marked on your HUD, don't worry. The further you get from home the richer the rewards, but also the more dangerous. If you want to spend a night away from your weatherproof cabin you'll need a tent, or you may freeze to death. Plus, bears. 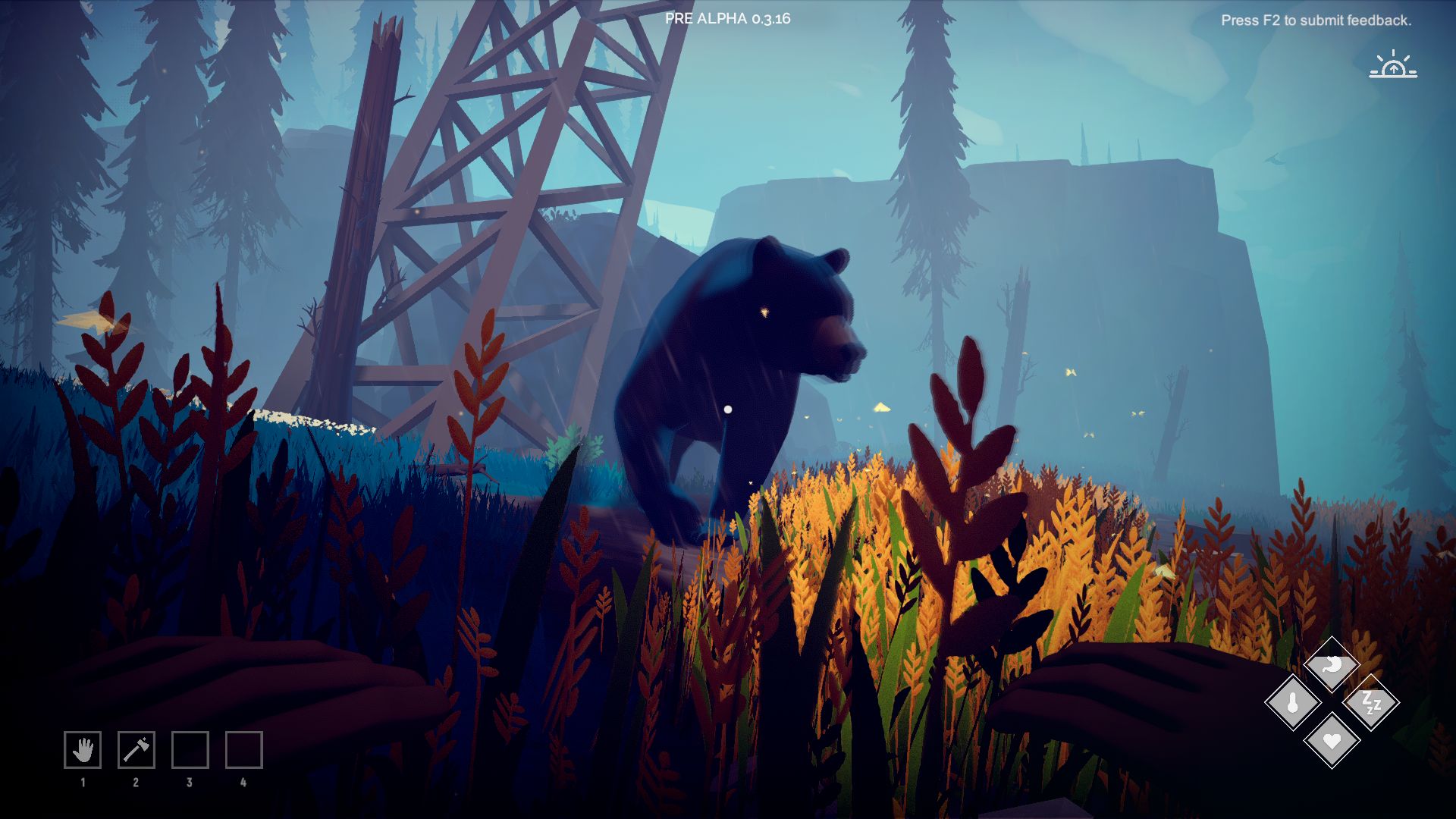 The bears don't roam just anywhere. They're an additional layer of danger around areas, like some of the ruined towers, to attach risk to the reward of grabbing some metal pipes and the crafting recipe for a watering can. They are impressively massive and seem, as you are crouched in the obligatory long grass nearby, about the size of an actual house. But they need a bit of tweaking currently. Sometimes when they spot you and bound at you, they then bug out a bit and stand still indefinitely. They also walk freely through the long grass, which I consider to be cheating. You're not allowed to walk through the thing I am using to avoid you.

There are other things, too. You can choose to have the recipe for whatever you want to build next display on screen, 0/28 pine planks, but the game takes that number from what you have in your inventory, not what you have in storage, so it'll say 0/28 unless you are actually carrying nearly 30 planks around with you. That trail of breadcrumbs could use some finessing, because it's hard to find the start of it unless you know where it is, and sometimes it disappears until you backtrack to a tower you've already stripped for parts and find that it, like a berry or a mushroom, has regenerated boxes of steel wire and a new map hint.

The roadmap indicates that there are a lot of features still to come, though, including a story, a brewery, and a pet. But even without that future, Among Trees is in good enough shape for you to get a decent few hours of relaxing entertainment out of expanding your cabin - and then for it to be a peaceful fishing-by-a-lake sim when you've maxed out on extensions. My living situation in Among Trees is better than my real life. I cannot fully describe how delightful and relaxing it is to wake up in my cabin and look at the morning light streaming into my new greenhouse. 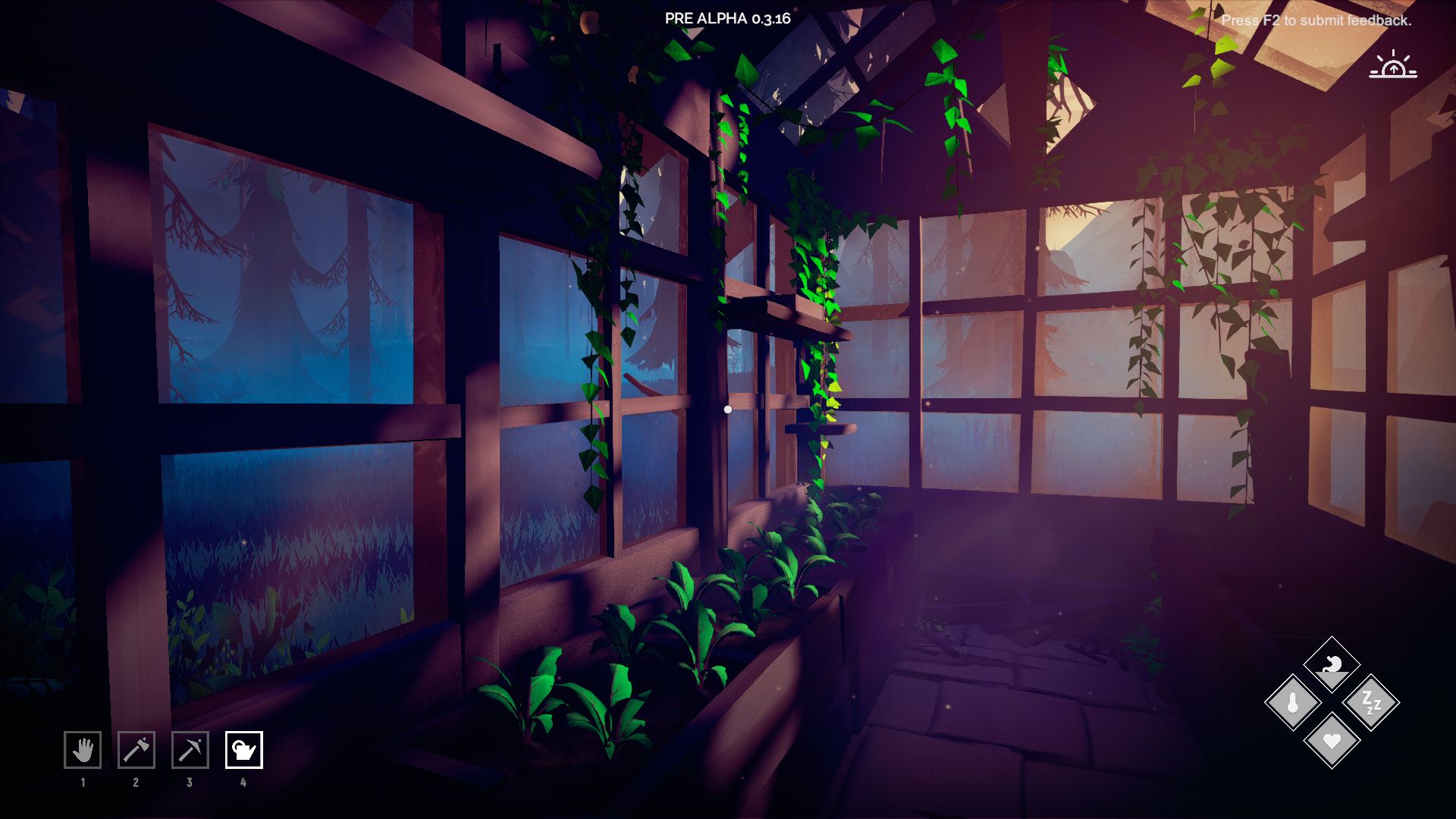