The funny thing about the friendship wrecking Among Us, a game where a small group of killers try to undermine and murder the crew of a spaceship, is that it's best played with friends. The wounds cut deeper when you're accused of sabotaging an engine by someone who knows you. The bloody betrayal by a BFF leaves you bereft and baffled. To get the most out of it, you need risk losing everything.

I have not been playing it with buds, pals, acquaintances, or even long lost relatives who Googled me. I've been on the public servers, where the cruel social examination and deliberate misdirection more resembles a group chat of teenage liars. It still works, it’s just a very different experience from the one that’s all over Twitch right now. And it has revealed to me how good I am at being a lying, traitorous murderer.

At the start of each round, the ship of ten players is sorted into crewmates and imposters. Being a crewmate is exhausting. You're given a series of small tasks to perform, like fixing wires and downloading data. You wander all over the ship, always on edge, trying to keep track of who you're with and where you are. Each task is a small mini-game that covers most of the screen, so while you're dragging things around or clicking buttons, you're tensely aware that you're vulnerable. I have died buying a drink, a fear I thought I'd left behind when I moved away from Glasgow. 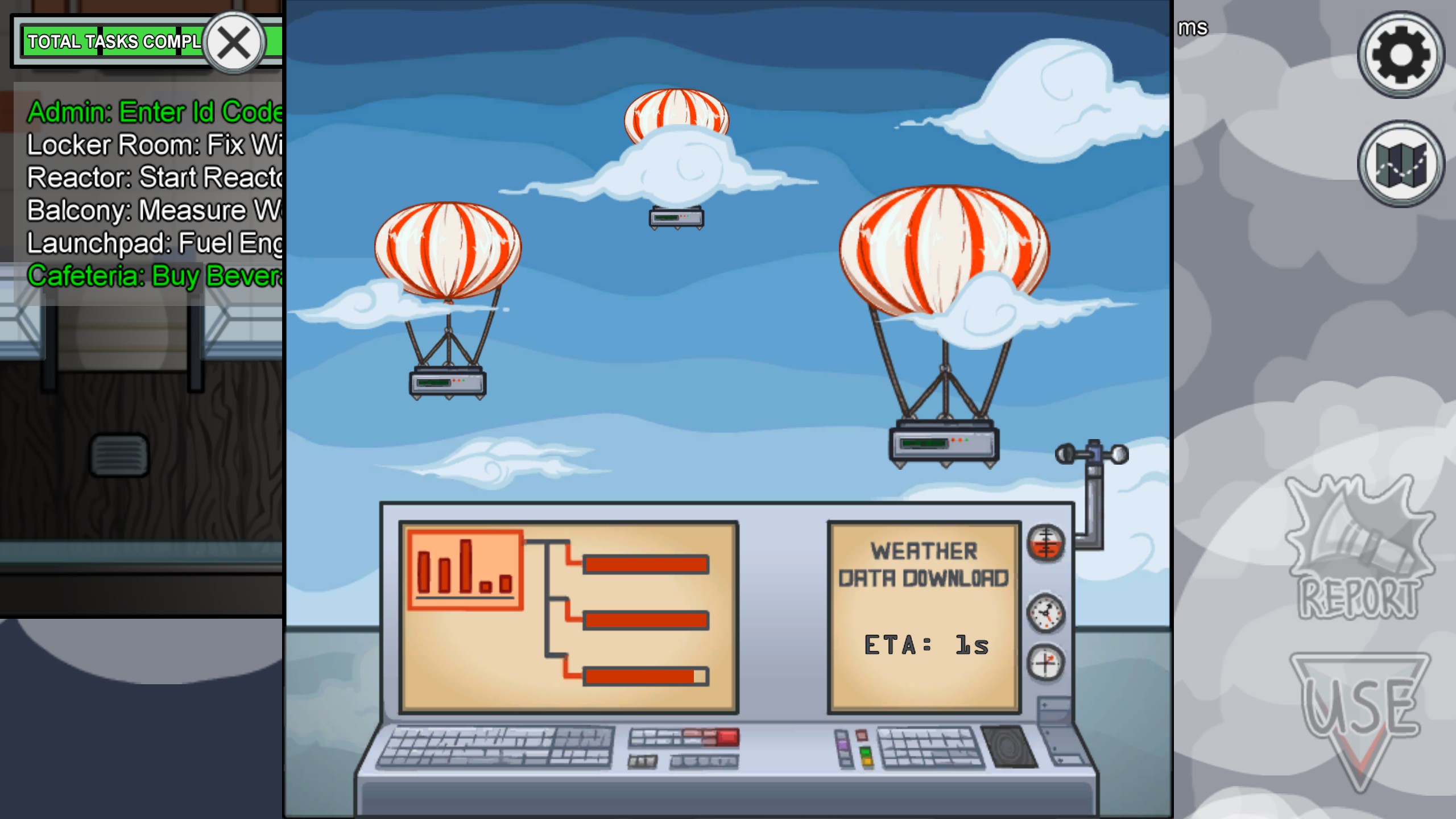 When a body is discovered, or if someone has another player to "j 'accuse", a meeting is called. There's no voice chat, just a text chat room where terse questions and accusations fly around, as each coloured crewmate starts trying to win the game, usually in a language foreign to them.

It's hardly Agatha Christie, but it gets the job done. After the chat, people start to vote for who they think the killer is. The colour with the most votes is kicked into a pool of lava, or thrown into space. So long Cyan, you murderous bas - oh, it wasn't him? Awkwarrrrrd!

Poor Cyan. He was just doing his job. Back to the murder ship. Rinse and repeat until the bodies pile up or you finally figure out the murderer.

Being an imposter is a lot more fun. For starters, you're not there to keep the ship running. You're just pretending to as you start sabotaging systems. The sabotage serves to scare the crew, but it's also a way to funnel people around the level. Killing is a solitary act. If you want last, you force people to flee to the corners of the ship, to suffer a dark and lonely death. Killers can pop up through vents, meaning you can quickly vanish from a murder. Then you wait until someone discovers the body, and the accusations begin. 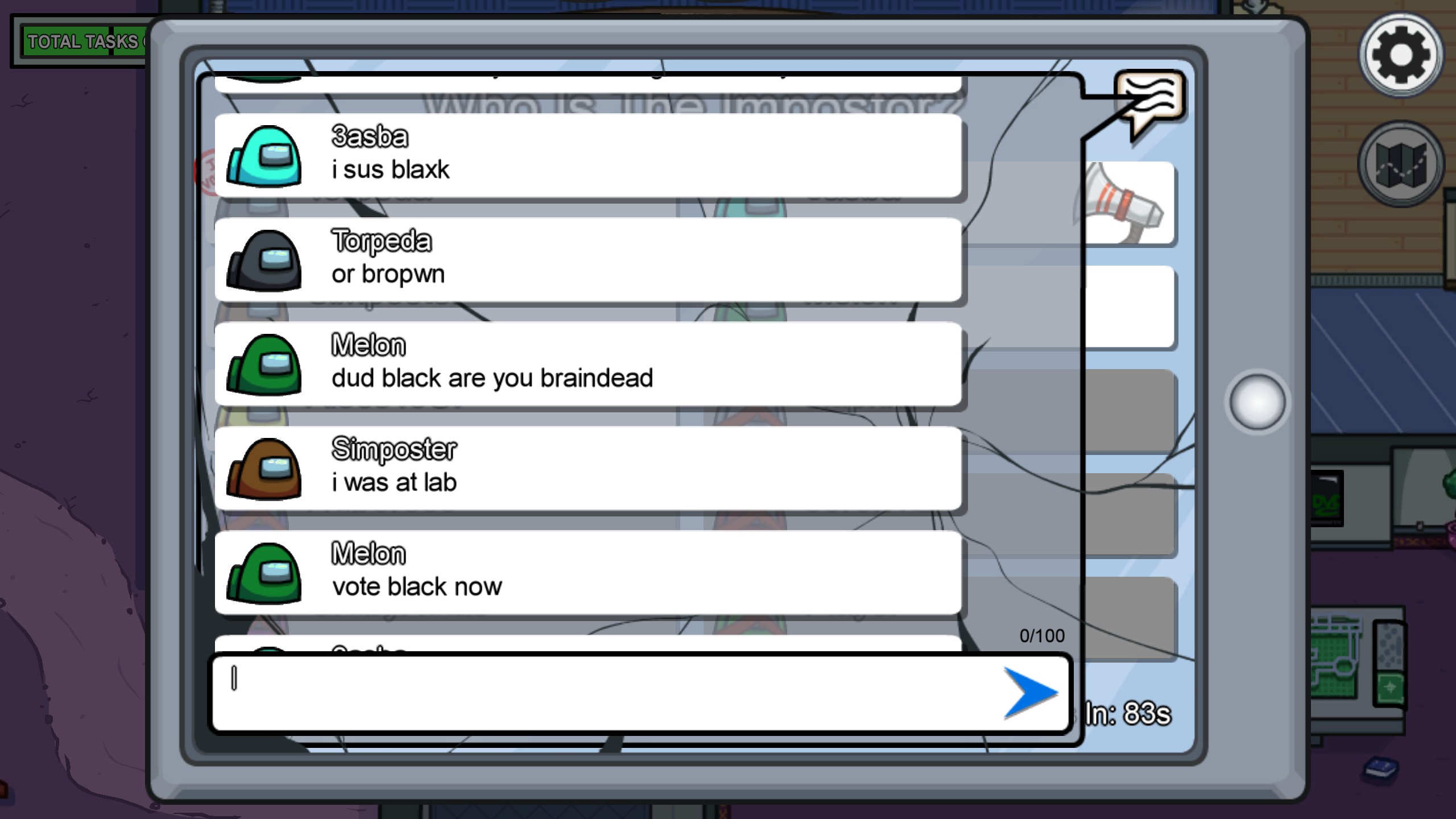 The group chat takes on a whole new dimension when you've killed someone. If you haven't been spotted killing or fleeing, you have a chance. It largely depends on what the other players were doing at the time. A cluster of them could easily realise you were not around, eliminating everyone in that group. But I never fell into a hole I couldn't all caps my way out of. I always start with a lie, saying one of the innocents couldn't be the killer, because I'd spotted them elsewhere. That's generally enough to get someone on your side. It's a cheap tactic, but I've yet to be uncovered as a killer, though there have been some close calls.

A meeting was called, and a player in a blue spacesuit accused me. I feigned surprise and shock and suggested they were trying to frame me. I DEMANDED proof. That's a fun thing to do because they can't present it. There's no evidence system, just claims and counterclaims. Typing can be a superpower in Among Us. If you can out-type an accuser, you can out-accuse them, too. So I did.

You might think you're not capable of being a good liar. I worried about that, too. It turns out I'm a great liar, and I have no moral concerns about attempting to have an accuser killed. Sorry, mum. Your boy's a wrong'un.

It's a thankfully quick little game, and easy to learn, because the servers are currently very flaky. Falling over, or filling up, so you get sent back to the main menu when the connection fails, which is time-consuming. Finding a game is as hard as finding an imposter, but I was usually in and sleuthing in under a minute.

You also get thrust into rooms filled full of random languages, unable to communicate who did what and where. I kept getting matched with Filipinos, and don't know the phrase for "Blue did it" in Tagalog. I'll have to learn if I carry on. I probably will. It's a compelling, anti-social exercise. Playing with strangers doesn't have the weight of playing against people you know, but it also makes it easier to be a complete and utter bastard.