As pre-launch demos go, Anthem's VIP demo the other week left a pretty bad taste in everyone's mouth. PC performance issues abounded. Load time were horrendous (if you even managed to get connected to one of the servers, that is), lag times were all over the place, and the frame rate went up and down like a yo-yo.

Happily, Anthem's open demo, which finished yesterday evening, seemed a lot more stable. There were still moments when the frame rate took a bit of a dive (much like my attempts to control my Javelin with its horrendous mouse and keyboard controls), but on the whole I rarely ran into any problems. So, even though it's early and not yet completely final, I thought I'd try a couple of graphics cards on it anyway - Nvidia's GeForce GTX 1050 Ti and RTX 2060 - to see how they performed and what kind of frame rates we might be able to expect come launch day on February 22nd.

Of course, it goes without saying that all of the speeds I'm about to talk about may well change by the time the full and final version of the game comes out, and I'll be doing a much more thorough PC performance test on Anthem with a much wider variety of today's best graphics cards nearer the time. 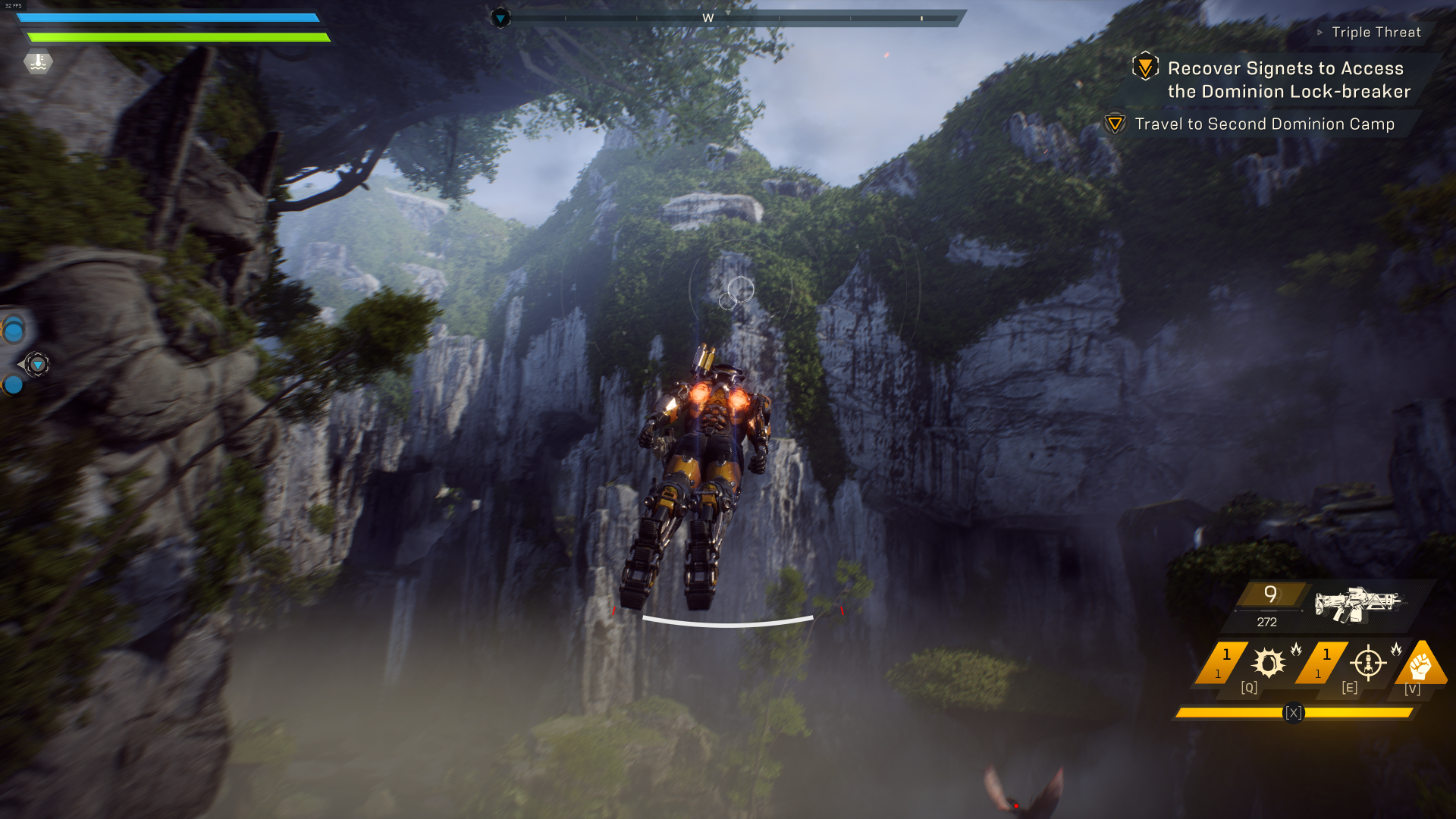 Still, I thought it would be interesting to have a little poke around the game early, as any one who did manage to hop into one of Anthem's Javelin suits and live out their video game Iron Man fantasies this weekend will have found that even this eminently more stable build of the game was still pretty demanding on the old PC performance front.

Before we dive into the specifics, though, let's remind ourselves of Anthem's minimum and recommended PC system requirements:

The minimum specs seem quite promising for those still in possession of rather more elderly systems, as a GTX 760 / Radeon 7970 would imply a pretty low barrier to entry. The bad news is that neither EA or BioWare have actually given any indication as to what kind of speeds or resolution you might be able to get from those specs, and judging from how hard I found it to get a consistent 60fps with the GTX 1050 Ti at 1920x1080, I'd imagine these specs are probably for 720p play at the very most.

Anthem's recommended specs, however, are probably more what you should be looking at if you're targeting 60fps at 1920x1080. The RTX 2060 is, of course, a slight anomaly here, as this is significantly more powerful than either the GTX 1060 (see our GTX 1060 vs RTX 2060 comparison piece to see just how much faster it is) or the RX 480. However, I suspect this is because Anthem is one of the handful of games that's got confirmed DLSS support so far (although quite when it's coming 'shortly after launch' no one knows yet), so you'll need at least an RTX 2060 to take advantage of it. DLSS, in case you've forgotten, is one of the fancy performance-boosting features of the new RTX cards - and man alive are they going to need it to hit that perfect 60fps on maximum settings at higher resolutions.

But enough specs chat. Let's get down to some numbers. Specifically, some numbers for the GTX 1050 Ti - and ooof, it's not pretty. Even on Low at 1080p, I was looking at a range of 45-60fps in main hub of Fort Tarsis, where you do all your mid-mission story moving on and talking to NPCs and the like, which then dropped to between 40-45fps in the Forge area over where your Javelin lives.

Now I wasn't privy to the VIP demo, but by all accounts a similar drop in speed happened when you entered the Forge back then, too, so it may just be that the Forge's busy, market stall hub structure is going to be a bit of a natural problem area. Indeed, even the RTX 2060 had difficulties maintaining a consistent frame rate here compared to speeds I saw elsewhere in Fort Tarsis, so it certainly doesn't seem to be something unique to the GTX 1050 Ti. 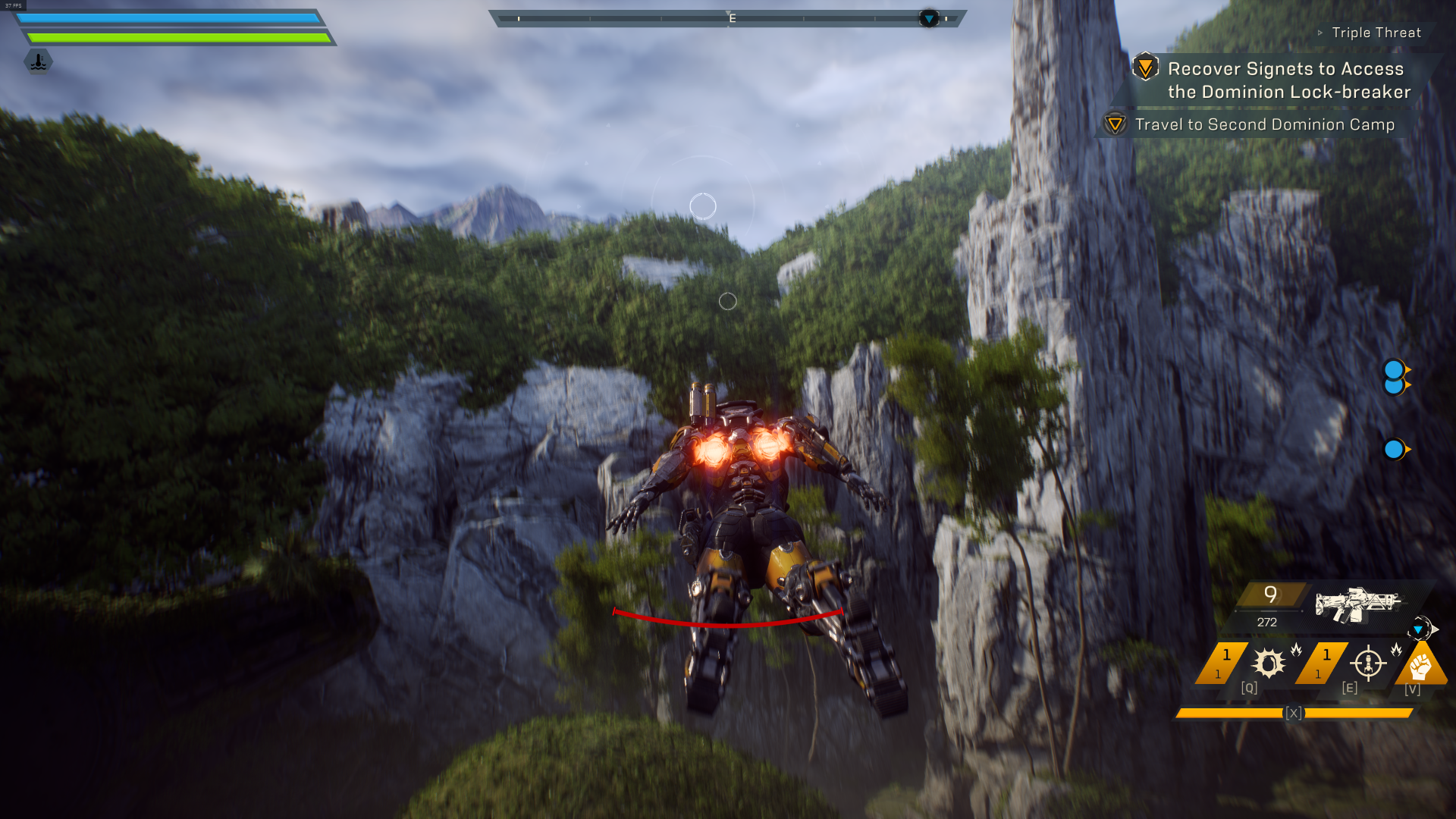 It's a shame, given it's one of the areas you'll probably be spending a lot of time in, but overall I found the speeds I got in the Forge were largely reflective of what I saw outside in the wider game world. For example, the frame rate mostly stayed around the 40-45fps mark when I engaged my aforementioned Iron Man fantasy and started whizzing around the world map on a proper mission, and I only really saw it creep back closer to 60fps when I happened to be looking at a particularly bland bit of sky or empty cave section.

That's probably about as good as it's going to get 1080p, however, as knocking the settings up to Medium at 1080p started to get a bit dicey. Over in the Forge, the frame rate varied between 32-40fps depending on where I happened to pointing the first-person camera, while out in the wider world I was looking at something closer to 29-37fps. It wasn't unplayable, per se - if anything I imagine this is probably closer to what you'll experience on consoles, judging by our pals at Digital Foundry's verdict on the demo. However, there were certainly a couple of slideshow-like moments when a swarm of exploding spider enemies came onscreen, for example, and decided it would be a great idea if all of them self-combusted at the same time. There were fleeting highs of 45fps when I was flying around not doing very much, but more often than not it was down in the 30s somewhere.

As a result, I think Medium at 1080p is going to be very much the upper limit for GTX 1050 Ti owners, no matter how much time you spend fiddling with its various quality options in its Advanced Graphics Settings menu.

Thankfully, the RTX 2060 was a lot more promising, as you'd probably expect given it's essentially just as powerful as Nvidia's GeForce GTX 1070 Ti. Indeed, Ultra at 1080p posed no problem for the RTX 2060 whatsoever, as I saw frame rates as high as 120fps in Fort Tarsis, and at least 60-100fps in the Forge and the world outside, making it an ideal candidate for high refresh rate monitors.

The RTX 2060 handled Ultra at 1440p pretty well, too, running at 70-80fps in Bastion and between 55-75fps over in the Forge. I didn't see the frame rate go much higher than 65fps when I was out doing a mission, all told, but on the whole it was still lovely and smooth, with the frame rate rarely deviating below 55fps. The lowest I saw was a brief dip to 45fps during a particularly heavy firefight, but nothing too immersion-breaking.

Still, Anthem's DLSS support will no doubt come in handy for situations like this, and if the eventual performance boost is anything like the 10-15fps I saw in Final Fantasy XV, then that may well be enough to push it back up to a constant 60fps - although how much of a dip in overall image quality there might be as a result of Nvidia's AI gubbins filling in some of the texture detail as opposed to the GPU is anyone's guess. Until it's added to the final game and I've been able to test it, it's impossible to say. 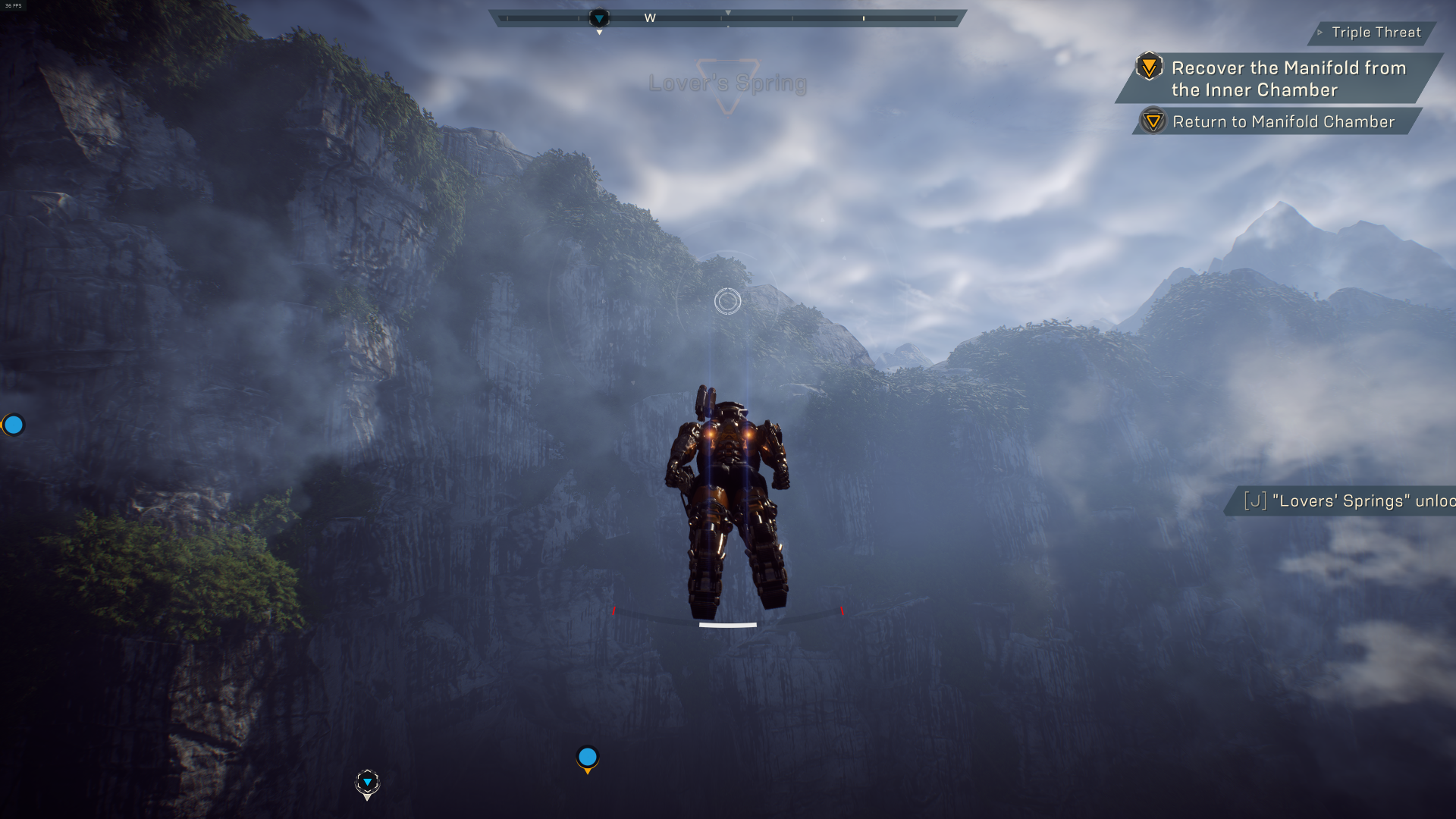 Still, even without DLSS at its disposal, the RTX 2060 still has enough juice to do a competent bit of 4K on Anthem if you've got the appropriate monitor for it. Ultra is sadly out of the question unless you want a borderline 30fps horror show that has as much trouble maintaining a playable frame rate as I do controlling a Javelin with a mouse and keyboard, but Medium is doable if you don't mind hovering around the 40-50fps mark, which in my eyes is still a pretty decent speed all things considered. However, given its heavy focus on shooting everything that moves, I suspect Anthem is going to be very much a game where you'll want to prioritise the frame rate over anything else, especially when your console box mates are all going to be stuck around 30fps.

As I said at the start of this piece, I'll be testing the game with more graphics cards closer to Anthem's proper release date on February 22nd to see what you need to do to get the best speeds at the best settings, but hopefully this has given you a glimpse at what these particular cards are capable of and where the potential sticking points might be. On the whole, though, the game was pretty stable throughout my brief time with it and looked absolutely fantastic when I could get it running at 60fps.

I do hope BioWare can sort out their mouse and keyboard controls before launch, though, as it felt like I was flying through treacle last night, not soaring and swan-diving like the nimble robot lady I've been dreaming about from the trailers. I imagine my team mates were all hanging their heads in shame as they saw me repeatedly slam myself into every conceivable surface while I wrestled with the mouse controls, and it certainly didn't make me feel like I wanted to come back for more shooty-flying Javelin action in a couple of weeks time. That won't deter me from bringing you my proper graphics card performance test, of course, although I may take the liberty of using a controller for that rather than contend with its awful mouse and keyboard controls again.

In the mean time, make sure to check out Dave's in-depth Anthem guide for all your Javelin-related needs and questions.