If you click on a link and make a purchase we may receive a small commission. Read our editorial policy.
AOC C27G2ZU review specs:

240Hz gaming monitors are all the rage among competitive esports circles at the moment, but I have to admit that I've never felt creakier or more decrepit playing games than I have with AOC's C27G2ZU plonked on my desk. To be clear, I'm not casting shade on the monitor itself. This 27in, 1920x1080 gaming display has an absolutely top quality curved VA panel, and its AMD Freesync Premium support works beautifully with Nvidia and AMD graphics cards alike. It's not one of Nvidia's officially certified G-Sync Compatible monitors (yet), but it's a fantastic gaming monitor nonetheless. I am, however, officially too old to keep up with its blistering 240Hz refresh rate.

There's been a lot of dubious talk over recent months about how 240Hz gaming monitors are the best gaming monitors you can buy because they can make you better at games, but having played several rounds of Valorant on the C27C2ZU, I can confirm that I'm still as terrible at it as I was on a normal 60Hz monitor.

If anything, I'm probably worse at it because playing with the frame rate cranked up to the full 240fps (which is very easy to do thanks to Valorant's PC requirements being so gosh-darned low) is just too damn quick for my eyes to keep up with what's happening. My reaction times just aren't fast enough to make the most of that extra smoothness - which is very smooth, I might add, like almost comically so (a torrent of hot butter doesn't even begin to describe it) - and I'd even go as far to say it often made me feel a little nauseous.

AOC C27G2ZU review in a nutshell

A great value 240Hz gaming monitor with a superb curved panel, but its 1920x1080 resolution means it's less suitable for both work and play.

As I said, this problem isn't unique to the AOC C27G2ZU, which is the first of five new 240Hz monitors coming from AOC over the next couple of months. It's just 240Hz monitors in general, and personally I'm not really sure there's much benefit to be gained by opting for this kind of higher refresh rate than, say, sticking with a 144Hz monitor such as AOC's superb 24G2U. You can, of course, choose to limit the C27G2ZU's refresh rate to 144Hz or below using Windows' display settings if you prefer (with the intention of having 'room to grow' at a later date if you feel up to it), but there's no getting away from the fact that 240Hz monitors still cost a lot more than 144Hz monitors. 144Hz I can just about deal with, but 240Hz is too much.

Perhaps that's just the old curmudgeon in me speaking, as 240Hz certainly seems to be the new standard that monitor makers seem to be aiming for these days. As I said, the C27G2ZU will soon be joined by four other 240Hz monitors in the AOC fold, and Dell have just refreshed their line-up of Alienware 240Hz monitors as well with the AW2521HFL and AW2721HFL. Asus, on the other hand, are looking even further ahead with their upcoming 360Hz gaming monitor, which was announced back in January. The only way is up, as they say. 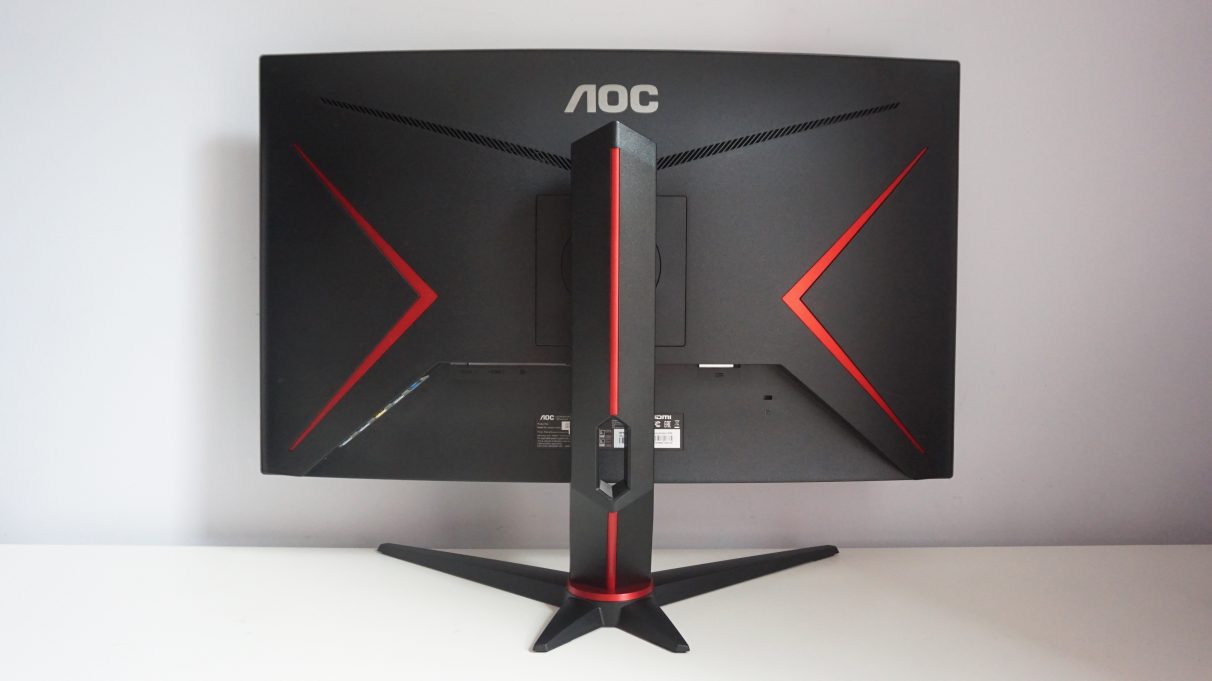 Still, if you're determined that 240Hz is the right refresh rate for you, then there's still plenty to like about the AOC C27G2ZU. Its curved VA panel is another first rate job from AOC, and my X-Rite DisplayPro i1 tool showed it was displaying an impressive 99.0% of the sRGB colour gamut straight out of the box. As a result, there was very little need to fiddle around with any of its settings in its onboard menu system to try and get a better picture (I did try, but got an identical sRGB result), and it means you can pretty much use the C27G2ZU as is without spending ages calibrating it when you first set it up.

Combine that with a lovely high contrast ratio of 3147:1 and a low black level of 0.08cd/m2 (the closer to 0.00cd/m2, the better), and the C27G2ZU ensures images, games and other daily desktop apps always look their best. It's not the brightest gaming monitor on the planet with its white level peaking at just 278cd/m2, but that's still more than enough for everyday use, and I didn't have any trouble seeing the screen in bright sunshine, either. All in all, it's a great-looking panel.

Its AMD Freesync Premium support is another bonus, too. Whereas normal Freesync monitors will automatically change your monitor's refresh rate to the number of frames being spewed out by your graphics card once you hit a certain threshold (normally around 48fps), a Freesync Premium monitor effectively removes that minimum frame rate threshold thanks to AMD's Low Frame rate Compensation tech. In short, it means you'll get that same super smooth, tear-free gaming experience at 30fps, 25fps, or whatever frame rate your graphics card can cope with. 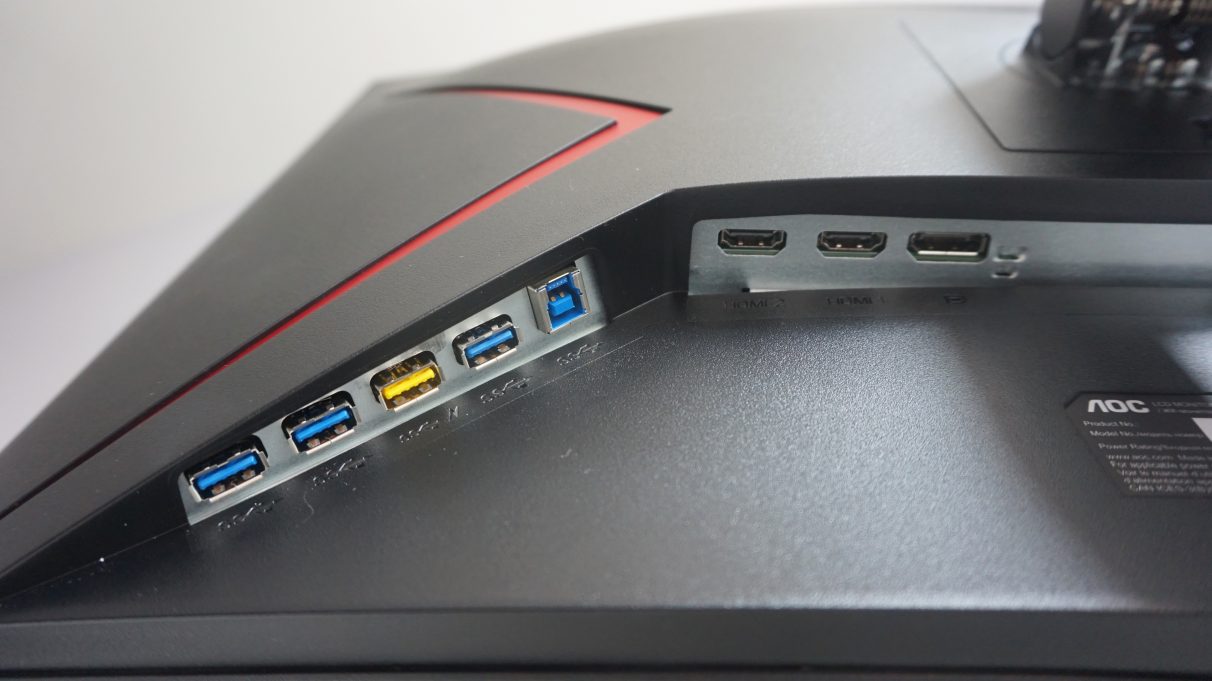 Plus, while it's not one of Nvidia's officially certified G-Sync Compatible monitors just yet, I didn't have any problem using an Nvidia graphics card to play games on it. While all Freesync monitors are technically G-Sync compatible (with a small 'c'), some monitors are more compatible than others, with the worst ones resulting in blinking, pulsing and strange colouration when paired with an Nvidia card. I didn't see any of these defects during my testing, so I'm confident that Nvidia GPU owners will be able to get just as good a gaming experience as big 'C' G-Sync Compatible monitor.

The AOC C27G2ZU comes with a great selection of ports, too, including two HDMI 2.0 inputs and one DisplayPort 1.2 input, plus four USB 3.2 (Gen 1) ports for all your peripherals and a headphone output. The ZU part of its model number also means you get a height-adjustable stand, giving you plenty of flexibility to get a comfortable viewing angle. The ZU is important, you see, as AOC are also releasing a C27G2ZE model very soon, which has a fixed stand and doesn't come with the USB hub, so make sure you pay attention to that last letter of the monitor's model name to make sure you don't buy the wrong screen.

The only downside is its 1920x1080 resolution. I always urge monitor buyers to try and go for a 2560x1440 resolution when buying a 27in monitor, as everything just looks that bit crisper and more distinct. A 1920x1080 resolution on a 27in screen is pretty borderline in my books, and while it's just about doable for the odd bit of work, letters and desktop icons can look a bit fuzzy and pixelated round the edges. 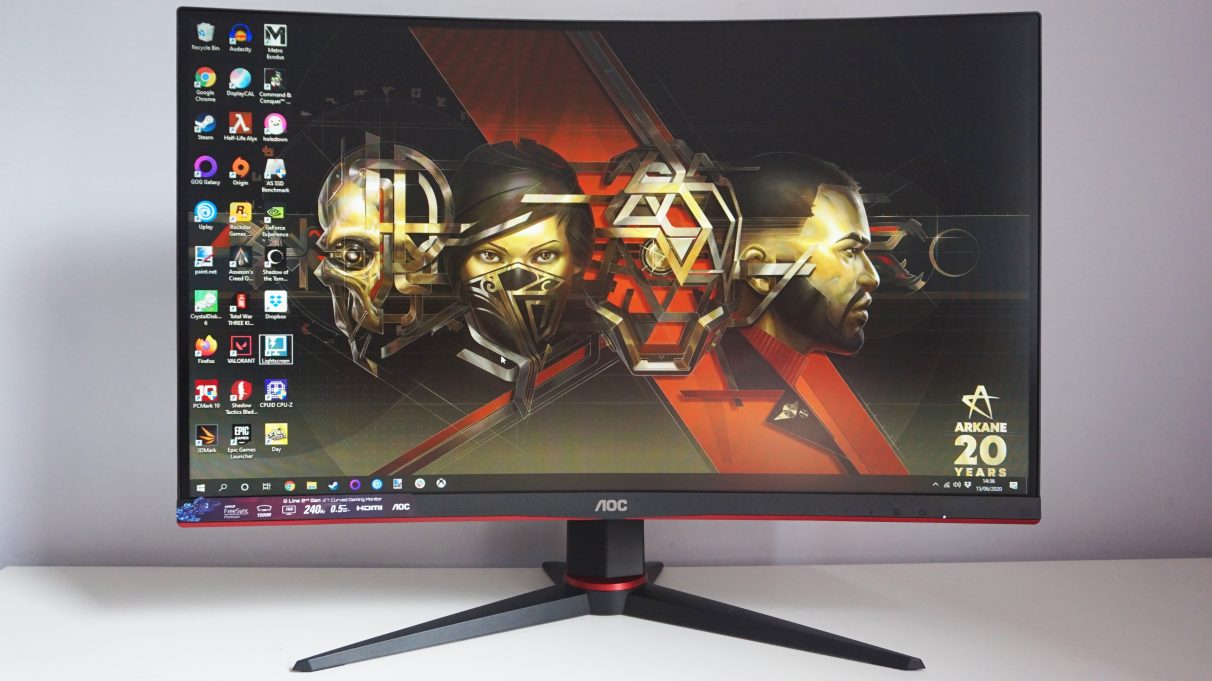 It's not something I'd recommend if you're planning on using this monitor for both work and play. However, if you're just looking for a pure, 1080p gaming screen, then the effect is a lot less noticeable. Big colourful games still look great on a monitor of this size, and even more detailed games such as Total War remain perfectly playable. Text is generally more legible than it is during regular desktop tasks as well, and I was able to read dialogue boxes, UI text and other bits of onscreen information without issue. In short, I wasn't forever questioning whether I needed another eye test while playing games on the C27G2ZU, which is more than I can say for typing up long word documents on it.

The best thing about the AOC C27G2ZU, though, is the price. While £300 (US pricing TBC) is by no means pocket change for a 27in monitor, it's pretty darn cheap when you compare it to other 240Hz displays. Even Dell's smaller Alienware AW2521HFL still costs £330 at time of writing, while its 27in AW2721HFL sibling goes for £400. Samsung's 27in CRG5 comes closest at £298, but you only get a fixed stand with that one, plus a single USB port.

All in all, the C27G2ZU is pretty great value compared to the competition, making this the 240Hz gaming monitor to buy if you've got the eyes and the reaction times to make the most of it. Otherwise, I think you'd be perfectly happy sticking with my current best gaming monitor pick: AOC's smaller, 144Hz gaming display, the AOC 24G2U, which can usually be had for as little as £180 / $180 when stock levels are back under control.