It's no surprise that Apex Legends, the battle royale from Titanfall devs Respawn, is a game all about movement and mobility. There's a lot to like about the fluidity and freedom of movement in Apex Legends, but beneath the surface there's an awful lot of nuane, and a tonne to learn. To that end, we've prepared a two-part Apex Legends movement guide for you.

This first part of our Apex Legends movement guide will cover the basics; how to sprint, climb, slide, use Ziplines, and get from point A to point B quickly. When you're done here, there's a link at the bottom of the page that will take you to the much more advanced part two, for those players looking for the ultimate top-tier movement tips, from Bunny Hopping to Wall Kicking, and much more. 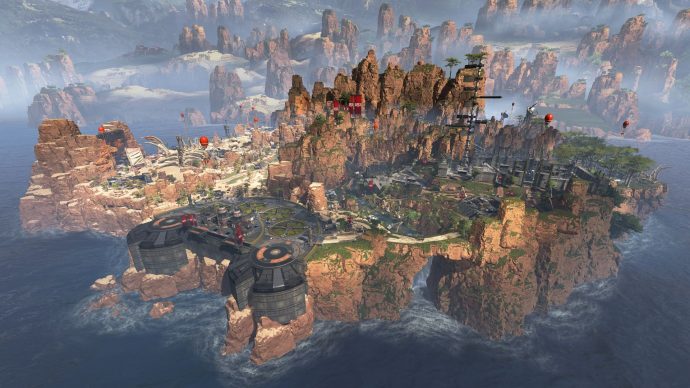 This two-part guide is just one section of our massive guides series, so if you're looking for more general info on the game as a whole check out our Apex Legends tips, which is packed with useful information along with links to all our other Apex Legends guides. So whether you want to decide which of the Apex Legends characters you'd like to play as next, or to check out all the stats and behaviours of different Apex Legends guns & weapons and Apex Legends Armor and Gear, we've got you covered.

In this two-part Apex Legends movement guide, we'll start with a recap of the basics, covering such things as sliding and vaulting, before moving onto some more interesting aspects of getting around the map. If you're after a particular piece of information or a specific part of the guide, then simply click any of the links below. 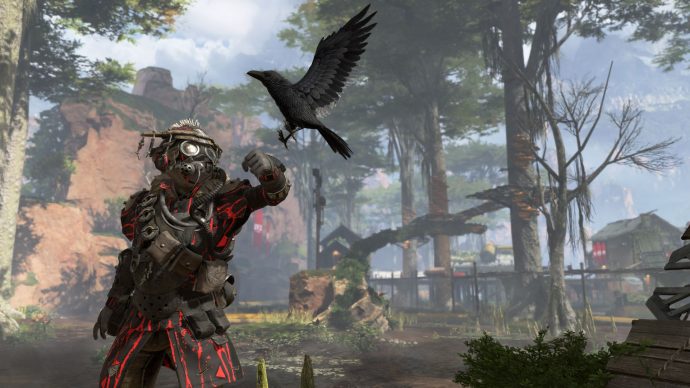 We won't spend much time on this, because if you've played the Training/Tutorial mode of Apex Legends you'll likely know this already. If you don't, it's similar to most other first-person/third-person games out there. The following is how you move with default settings, but if you want to change any of the keys you can do so in the Settings menu either from the Main Menu or in-game:


How to slide in Apex Legends

Sliding is an enormous aspect of movement in Apex Legends. Not only does it allow you to move much faster than sprinting for short periods of time, but it also makes your character model more compact and difficult to hit. The entire map of King's Canyon was built with sliding in mind, with tonnes of inclines and cliffs or varying steepness. It's a good idea to train yourself to see your surroundings as a collection of opportunities for sliding.

To slide, all you need to do is to crouch while sprinting. You can slide forward, or you can strafe-slide by holding either "A" or "D" while sprinting and crouching.

Sliding works best while travelling down slopes, because you continue to slide until you reach the end of the slope (or are blocked). Bear in mind that there is a maximum speed for sliding which you quickly reach after about a second of sliding, so you won't continue to accelerate if you slide down a large hill.

You can also slide along flat surfaces very effectively (though not for as long as if you were sliding downhill) and you can even slide a very short distance uphill, though this is by far the worst use of sliding in Apex Legends. Experiment with combining slides with sprints and jumps in the Training area until you've got a good handle on how to get from point A to point B quickly.

Pro-tip: This is a little more advanced, but you can actually run and slide backwards as quickly as you can forwards. This is useful when you're engaged with an enemy and need to reposition without taking your eyes off them and still being able to respond to incoming threats.


How to climb in Apex Legends

This is not actually something taught in the Training/Tutorial area of Apex Legends, but it's as imperative an aspect of movement as sliding, and - again - the Apex Legends map was built with this ability in mind.

While Apex Legends lacks the horizontal wall-movement of Titanfall, it features a very flexible and robust vertical wall-movement feature, which allows you to scale walls of surprising height nearly as quickly as if you could sprint straight up them. To do this, just walk or sprint up to a wall, and jump when you reach it. Your character will automatically start to climb, and as long as you continue holding down "W", they will continue climbing until either they reach their climb limit or they reach the top of the doodad they were climbing.

At the end of the climb animation, your character will automatically perform a jump to reach just a little bit higher, so you don't have to worry about doing this yourself. All you need to do is aim at the wall and keep holding down "W" after you've started the climb.

Hundreds upon hundreds of surfaces across King's Canyon can be climbed, and you can use this to travel quickly across difficult terrain, or to reach otherwise impossible-to-access areas (which, incidentally, might hide a rare Loot Tick once you get up there - see our Apex Legends loot guide for more info on this!). 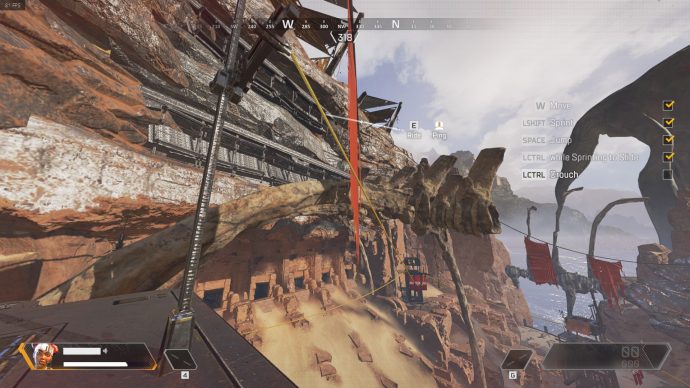 Another lovely method of travel across King's Canyon is by using ziplines. With the exception of Pathfinder's ultimate ability (see our Apex Legends characters guide for more details), all ziplines are pre-built into the map and they always appear in exactly the same places every match.

There are three kinds of ziplines in Apex Legends; horizontal ziplines, which allow you to travel in a fairly horizontal manner from one point to another in a short space of time, generally over cliffs; vertical ziplines, which do the same but allow you to scale directly upwards to a higher ledge; also finally, Balloons, so-named because of the red balloons at the top of each one, which you can use to travel straight upwards, and if you reach the top then you will push off and deploy your rockets once more, just like when landing at the beginning of a match.

To interact with either of these types of zipline, all you need to do is walk up to one and hit your Interact key (default "E"). You will automatically latch onto the zipline and begin your journey along it. You can jump at any moment while on these ziplines (there's no fall damage in Apex Legends so no need to worry about injuring yourself), and you will detach from the zipline and jump off, while maintaining the momentum you gained from the zipline. This is particularly useful with horizontal ziplines, because you can jump, turn 180 degrees, and quickly attach to the zipline again in order to change directions.

Bear in mind that Balloons will only give you the rocket effect if you reach the very top. If you jump off yourself, then you will simply fall straight down.

Holster your weapon to move faster

This is an extremely useful feature that should be used whenever you are not in immediate danger. To holster your weapon, hit "3" by default (I'd advise rebinding this key to something more immediately accessible, because you should be using it pretty much all the time). To take out your weapon again, you can either hit the holster key again, or hit one of your specific weapon slot keys (default: "1" and "2") or your Cycle Weapon key (default: "Mouse Wheel").

With your gun holstered, you will sprint quite a bit faster, and you will have more momentum for sliding and jumping too, making holstering your weapon one of the very best things you can to to improve your mobility and movement capabilities.

Now it's time to combine everything you've learnt so far. The following is generally the fastest way to move about in Apex Legends:

This slide-jumping technique is faster than any other method of travel across flat terrain, though if you are sliding down a hill then simply sliding until you are at the bottom will always be faster. The above method can even be used to good effect while travelling up slight to moderate inclines, but if it's a really steep hill then simply sprinting up it would get you to the top quickest.

It may take you a bit of practice to figure out the exact point of your slide where you should jump, as well as how long you need to sprint for before sliding, but spend some time in the Training area and you'll have it figured out in no time. You can of course do this exact same thing with your gun out if you're in the heat of battle, though it will be slower and you won't cover ground as quickly.

Now you're ready for our advanced movement guide!

That's it for movement basics; now you're ready to head over to our Apex Legends advanced movement guide, which will explain more advanced and complex maneuvres such as the bunny-hop, the wall-kick, and much more. So I'll see you there!