How vexing. I'd planned to devote the lion's share of today's column to that portion of Veitikka's debut title last month's overwhelmingly approbatory preview-cum-review didn't cover. Like many I was expecting this friendly top-down conflation of Close Combat, Combat Mission, and Command Ops to ship with something the preview code lacked. A campaign. 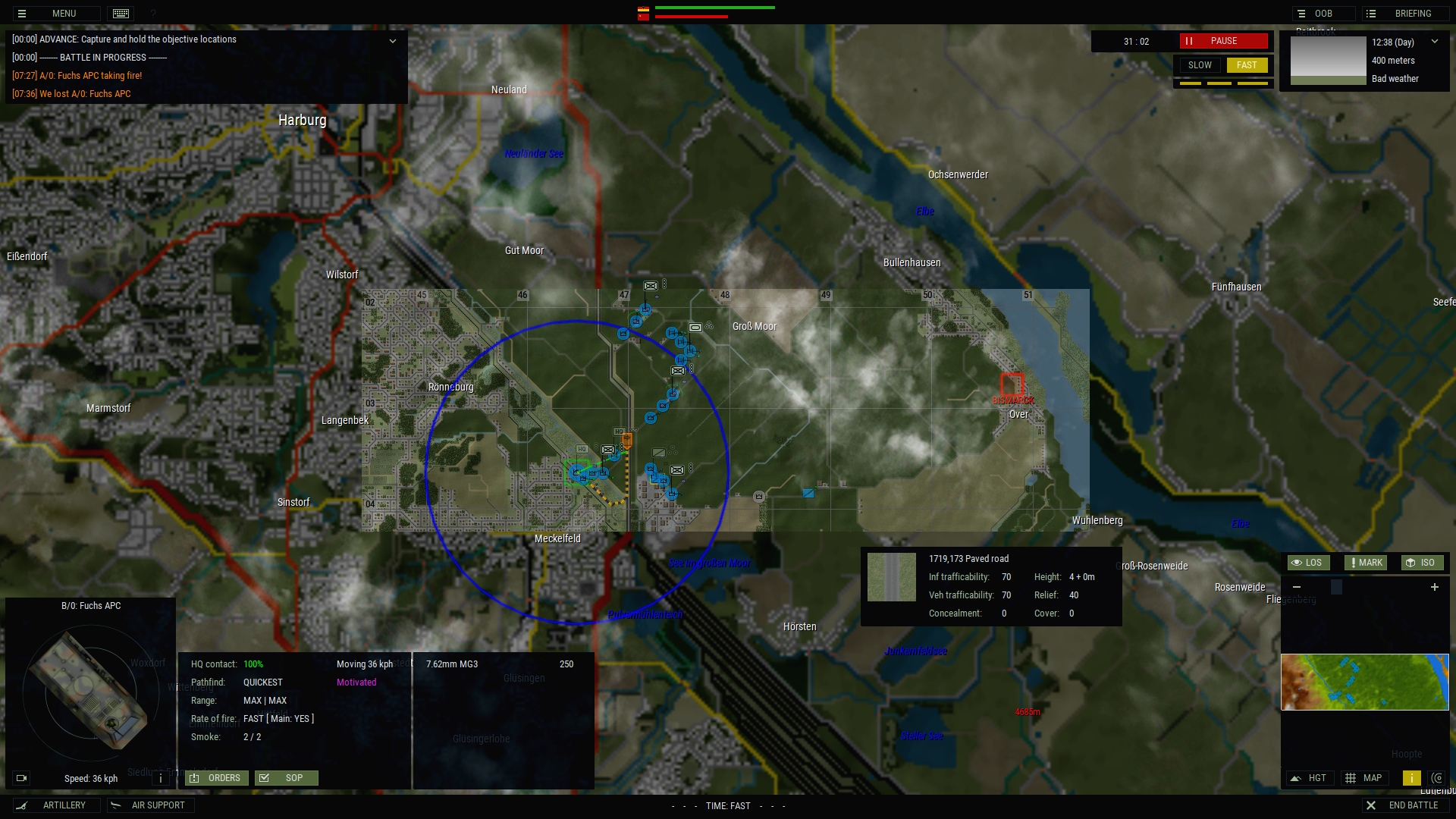 The dev's failure to provide anything resembling a long game is a major disappointment, especially when you consider that such a mode need not have involved months of additional coding. Juha Kellokoski and colleagues have a ready-made foundation for compelling multi-battle operations staring them in the face in their 'master map' system. 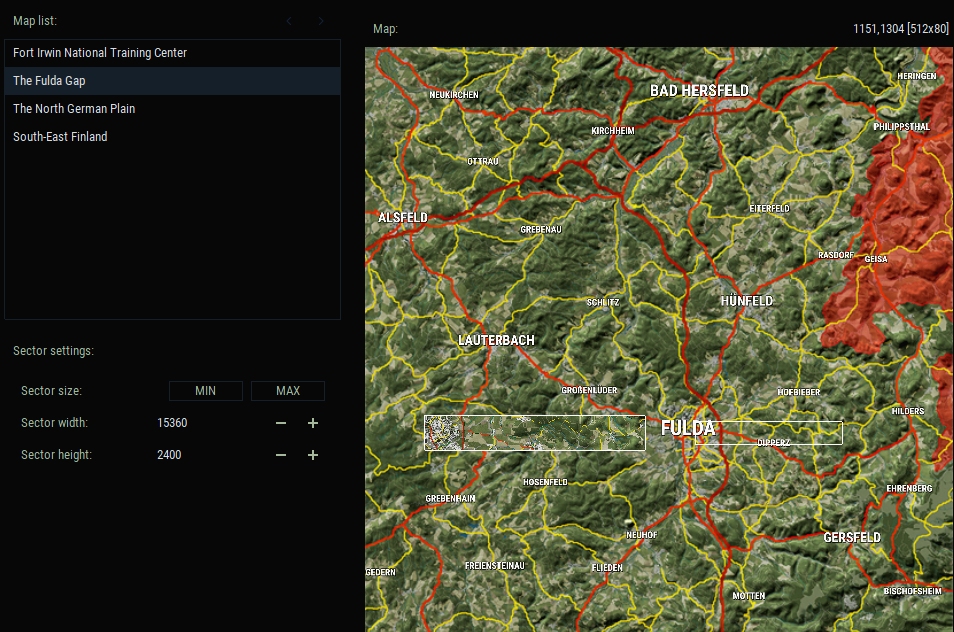 As you'll recall, AB's peerless skirmish generator relies on battlefields manually selected from four large source maps by the player. You place a customisable selection rectangle on any tract of terrain that takes your fancy and, hey presto, your venue awaits.

Mentally squint and it's dead easy to picture strips culled from master maps serving as operational playgrounds. Push westward or eastward... Victory Locations secured in one battle serve as deployment zones in the next... Between scraps, bolster your battered core force with purchased reinforcements... You know the sort of thing. Ops unfurling in this manner could have been AB's crowning glory. 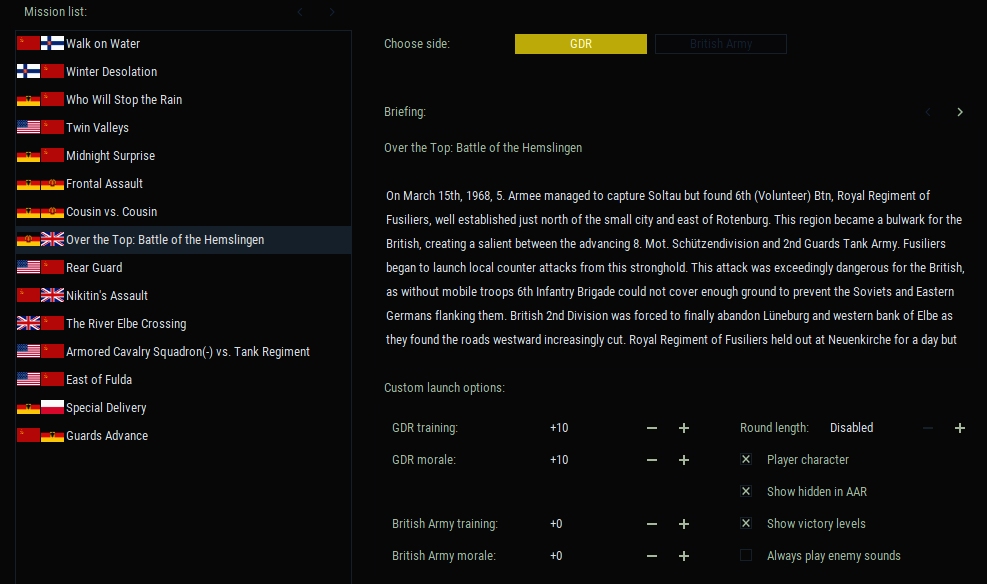 Instead we get a late-in-the-day announcement in an easy-to-miss forum thread pointing out that campaigns (branching mission sequences) are due to arrive in DLC. And we get fifteen single scenarios that, though varied and well constructed, fail to provide this important addition to the RTT genre with the tungsten carbide core it deserved. 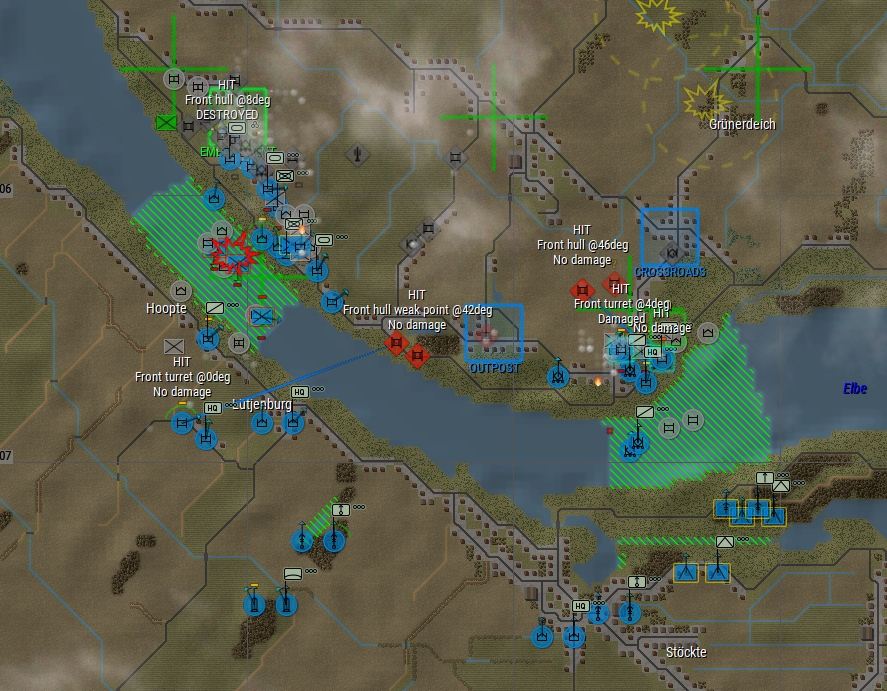 Don't get me wrong. I'm thoroughly enjoying the authored missions. Sometimes designed to showcase engine capabilities not utilized in skirmish mode – things like no-go zones and river fords – or to illustrate just how much attention to detail has been lavished on mechanics like spotting and weather, they frequently show AB at its best – an accessible, drama-rich wargame able to combine scale and subtlety on the same icon-dotted screen.

Scenarios like Winter Desolation and Who Will Stop the Rain? demonstrate the impressive lengths the devs have gone to to simulate the impact of weather, different light levels and battlefield obscurants on Cold War (1965-1991) combat. I love the way wind nudges smokescreens and parachute flares, and drives dust clouds and bushfires. Few wargames illustrate the challenges of night warfare better or hide static infantry as assiduously. In darkness, waypointing a unit past a blazing wreck is seldom wise. In a heavy rainstorm, pushing AFVs quickly past a seemingly deserted copse can invite disaster. 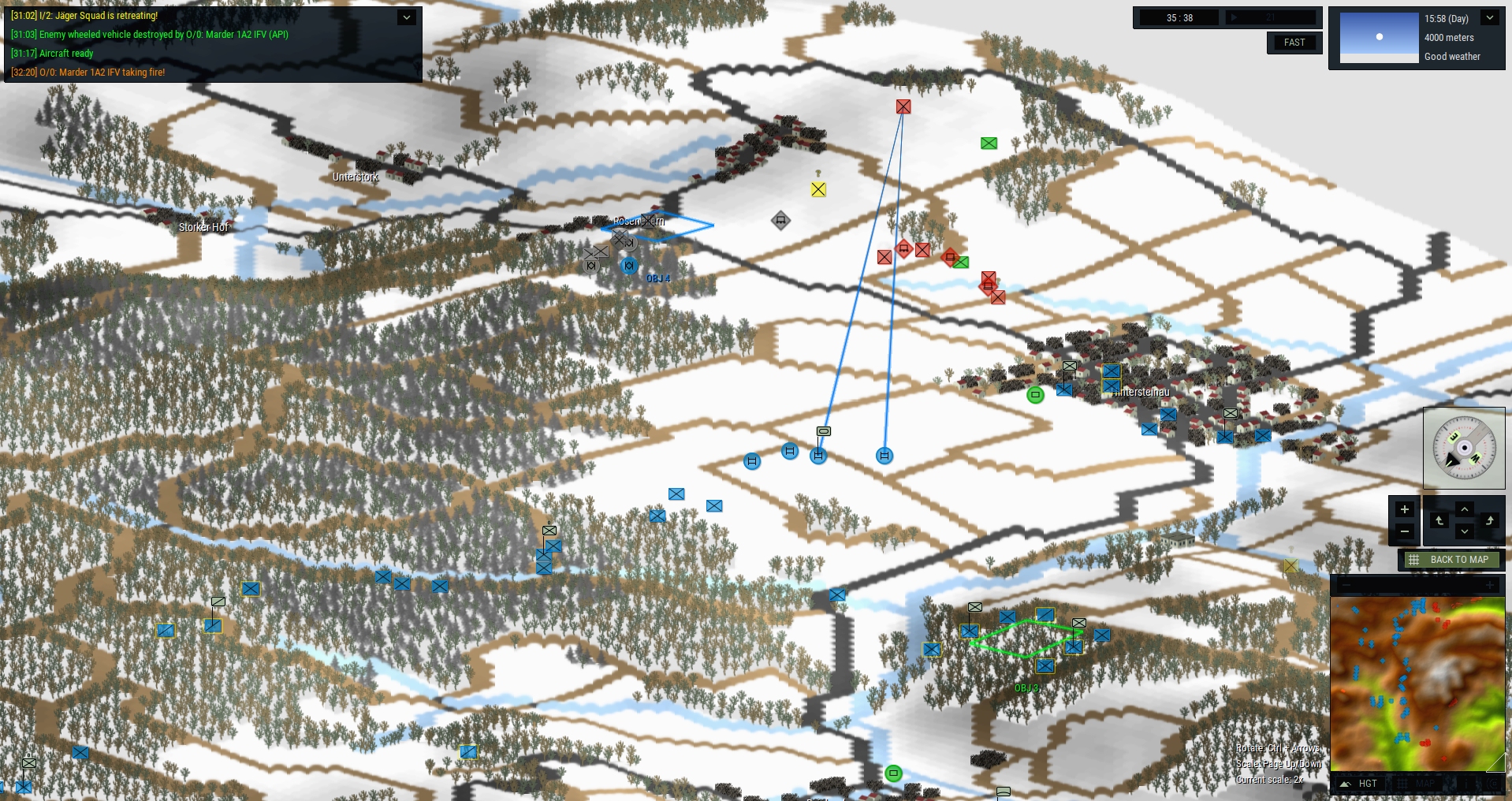 Does the game's unscripted AI adjust its behaviour to suit prevailing conditions? I'd love to say yes, but I've yet to see clear evidence of such adaptation. Since I wrote my original piece, although I've been beaten by AB's artificial adversary on numerous occasions, I've not witnessed anything that could be described as genuine cunning. Always entertaining and usually competitive, the AI rarely squanders its winged assets or fails to cause hurt with its off-map howitzers and mortars, but often sustains unnecessary losses because of its questionable coordination skills, willingness to lead with armour, and reluctance to pause periodically and ponder. 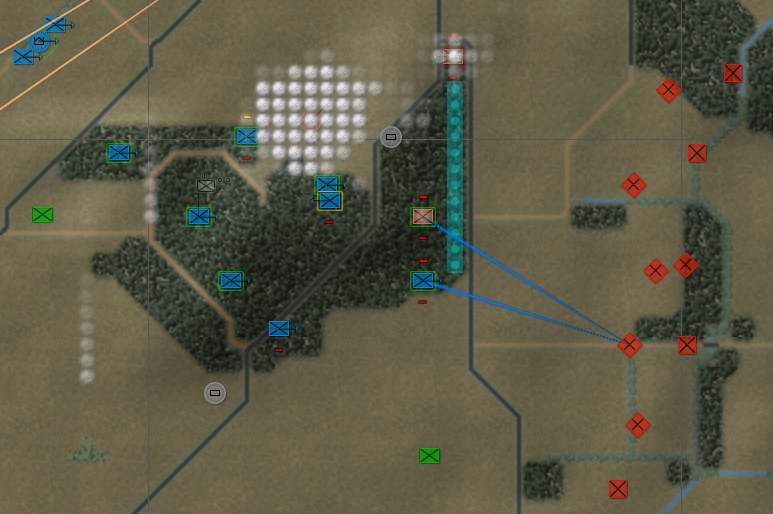 An unassuming 'force type' flag on the skirmish set-up screen has a significant effect on how the CPU approaches a task. Unless that flag is set to 'infantry' (a choice with unit purchasing implications) the computer has a habit of putting AFVs rather than foot sloggers in the van of an attack. Knowing that your enemy is likely to send tanks right into the heart of VLs, even if those VLs are in dense woodland or urban areas, encourages counter tactics that probably wouldn't work against the kind of living, breathing COs the game currently doesn't support. 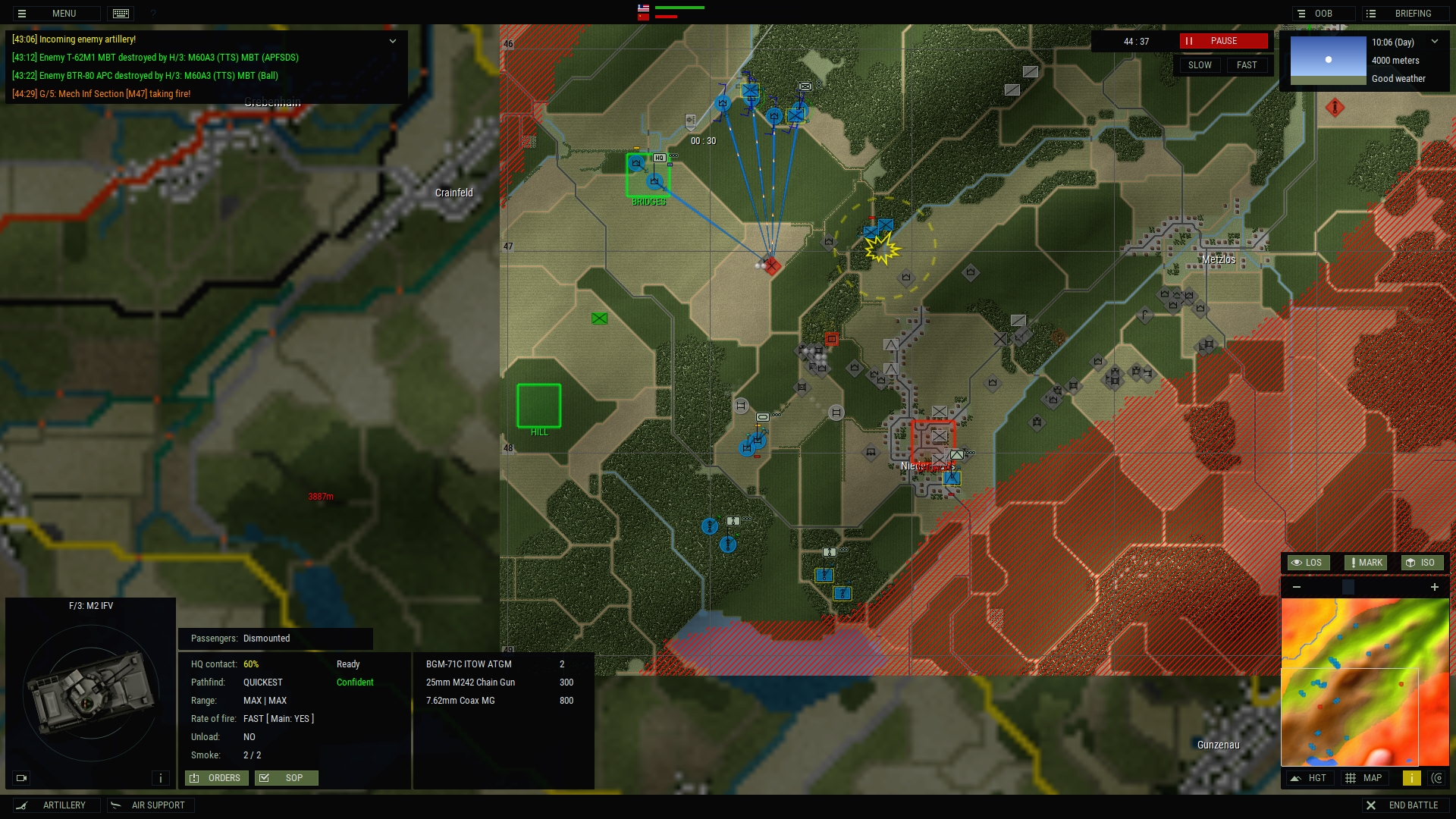 In October I failed to notice that AB offered something called 'round mode' in addition to pausable continuous time. The manual describes this option as akin to WeGo but in truth it's a pretty poor substitute. In round mode you define the length of the pause-separated rounds (30 to 360 seconds) at the start of a game, and can't pause or save while a round is in progress. Unfortunately, what might have been a tempting alternative to real-time play is rendered fairly pointless by the lack of Combat Mission-style order bans or action phase replays. Because you're free to issue commands while rounds are in progress, and can't review/savour interesting incidents when they're over, there seems little point in fracturing game flow with this option.

My earlier piece also contained scant information on aircraft and artillery treatment so let me shed light on those facets now.

Beyond assigning them target zones and choosing the moment they enter the fray, you have no control over the antics of fixed-wing friendlies. Helo control is, by AB standards, a little convoluted. They must be assigned multiple 'battle positions' and target zones before a battle starts, and, after kick-off, can only be persuaded to leave their pre-arranged loiter spots by enemy pressure or a special request from an avatar unit* . Whatever the simulatory justification for the chopper strictures, it would be nice if they were optional rather than mandatory.

*Ticking the 'player character' box on the set-up screen allows you to cast any friendly unit as an avatar. Vehicles or squads honoured in this way boast bulletproof morale and aren't affected by the order delays that trouble all other forces. Valuable as arty observers and helo controllers, their one drawback is their irreplaceability. If your avatar kicks the bucket it's game over. 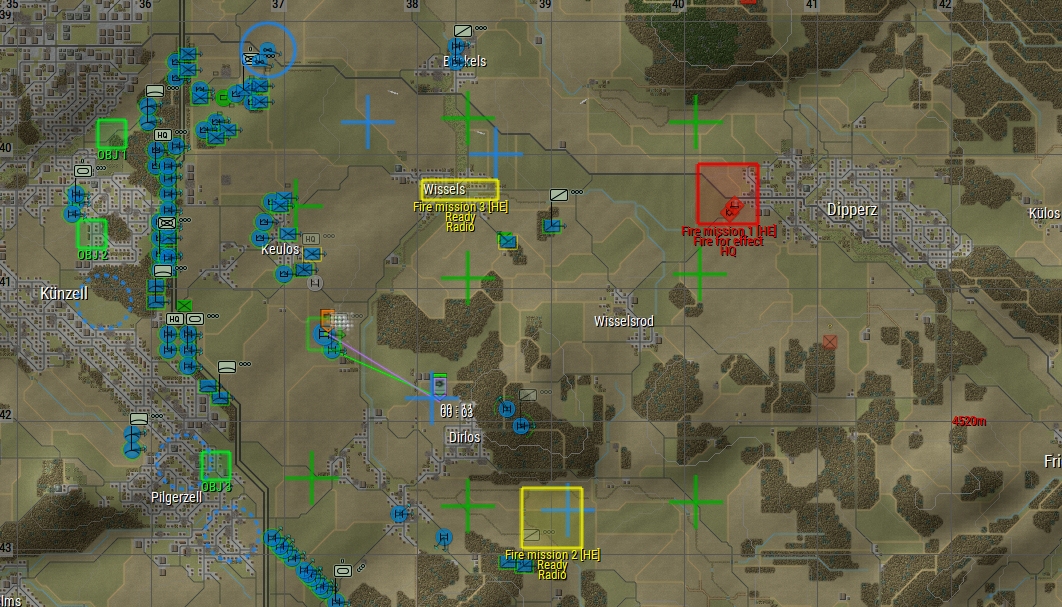 Units capable of indirect fire can be individual on-map SPGs, MLRSs, mortar carriers, or static mortars, or off-map batteries composed of the same. Because the target zones of the former are always single 30m x 30m grid squares and the target zones of the latter are always unrotatable blocks of grid squares, CMx2 Forward Observers accustomed to daubing artistic circles and lines on maps probably won't be overly impressed. Although the targeting mechanics are somewhat crude, barrages are simple to set up and halt, easy to follow (thanks to status labels and countdowns on the map) and surprisingly dramatic. Centre the view on a pounded position and the racket is impressive, the screen shake alarming. 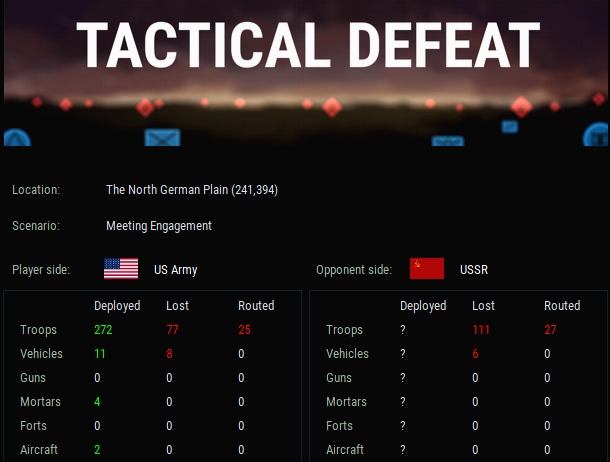 AB upholds the Difficulty Compact in skirmish mode by letting you alter relative force sizes, hand-pick units for one or both sides, and skew an air superiority setting. Before single missions you can tinker with morale and training levels to modulate challenge. As I'm still losing balanced Meeting Engagements to the computer on occasion, I expect it will be a while before I give the foe a helping hand.

From a modding perspective, AB shows considerable promise. Altering weapons and units or adding new ones to the database looks to be a piece of cake. A simple change to a config file turns the skirmish generator into a scenario editor and there's nothing, except indolence/full-time employment, to prevent you adding extra master maps. The question isn't “Will there be WW2 scenarios?”, it's 'When will the WW2 scenarios start arriving?'

I'd be surprised if anyone who enjoyed any of its touchstones (Combat Mission, Close Combat, Steel Panthers, Flashpoint Campaigns and Command Ops) ended up bitterly regretting purchase of the £30 not-available-on-Steam-currently Armored Brigade. While the missing campaign element and simulatory compromises like single-occupancy terrain squares (see previous article) mean I can't reach for an RPS Bestest Best sticker right now, once the Fulda Gap at the heart of Armored Brigade has been filled, stickerification may well be possible .