Compared to Asus' usual crop of PC peripherals, the ROG Strix Flare is a refreshing sight. Unlike the ROG Claymore, the ROG Strix X470F-Gaming motherboard or indeed anything else bearing the ROG moniker, the Flare doesn't have a single bit of sci-fi / Aztec / cyber text pattern anywhere on its grey plastic chassis - and looks all the better for it. There is, admittedly, a tiny RGB ROG logo peeking out of a small, triangular cut-out in the top right corner (which can either be removed or swapped for your very own 3D printed something-or-other, according to Asus), but otherwise this is a decidedly plain - and dare I say even vaguely stylish? - mechanical keyboard.

Okay, so you've still got RGB LEDs up the wazoo, whether it's the Cherry MX switches themselves, that aforementioned ROG logo, or - wait for it - its pair of underfloor RGB strips (yep, you heard me). Not everyone will be on board with all of that. But as mechanical keyboards go, the Flare does a pretty good job of making it all appear quite tasteful - and more importantly, doesn't charge you extra for a number pad like its Claymore cousin.

As alluded to above, the ROG Strix Flare makes a good first impression. The two-tone matt / brushed finish that shears diagonally down the right hand side of the keyboard all the way through to the detachable wrist rest (which is just about visible in the picture above) gives it a smart, but subtle look that not only helps breaks up the rest of its large, grey, slab-like tray, but also gives the impression its plastic chassis is made out of slightly higher quality materials than it actually is.

The braided 2m USB cable is another nice touch, as is its USB passthrough support, and I also like its clean, rounded corners and generously sized media keys - even if their left-sided placement leaves the rest of the keyboard looking a little empty. 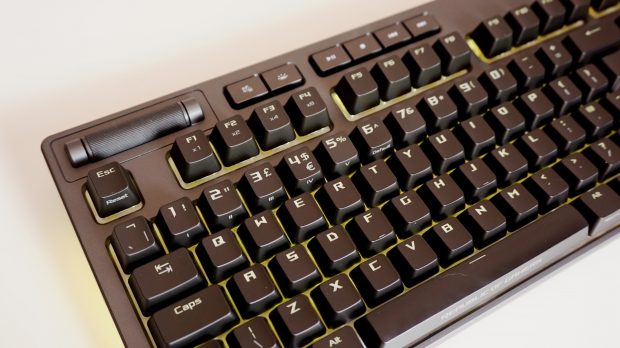 I also have a great fondness for its delightful volume knob. The ends are maybe a bit too close to Esc and F1 for my liking, but luckily the gap between those two keys essentially doubles up as a tailor-made runway for your middle finger, making it a lot easier, not to mention more comfortable, to roll across its rubbery, grooved surface as you please.

Out of the box, the RGB lighting isn't so shouty that you immediately want to turn it off, either. You can customise everything down to a per-key level by downloading Asus' ROG Armoury software, which also lets you match your chosen breathing/rainbow/rainfall/whatever light scheme to any other Asus peripherals you might have using their Aura Sync tech and record your own set of macros to any key you like, but on its default settings, everything (the keys, logo and underglow strips) just phases from one colour to the next as a single, cohesive unit. It's smart, restrained and won't immediately blind you as soon as you plug it in.

You can always turn it all off using the dedicated backlight key if you prefer (which also offers four different levels of brightness intensity), but on the whole I found its measured, out-the-box settings quite pleasing on the eye. I'm normally quite averse to wild RGB antics, especially when I have to spend ages trying to tame it into something remotely acceptable, but even the underglow strips were surprisingly subdued, providing a nice little extra something to the overall look of the keyboard without going absolutely bananas with it.

Indeed, they weren't distracting in the slightest. I feared they'd be the keyboard equivalent of Philips' Ambilight tech that you may have seen on their TVs and monitors, which is meant to help 'extend' the picture onscreen by using rear-facing LED lights to project its most dominant colours onto the wall behind it. Personally, I've always found this immensely irritating in a display context, as I just can't get past the idea of having vague clouds of colour appear beyond a screen's big, thick bezel.

On the ROG Strix Flare, however, it's a much more tempered affair, with each strip maybe providing an extra 10mm of light poking out each side as opposed to several feet. In fact, from a normal seated position, I barely even noticed the underglow on the right hand side of the Flare, as it was largely hidden by the rest of the keyboard. Only the left side was really visible to me, and even then it was fairly understated.

Typing on the ROG Strix Flare was perfectly pleasant as well. It's available with either red or brown Cherry MX switches, so the overall feel of the keyboard should be instantly familiar to mechanical keyboard veterans. I had the red version in for review, so each key had a much sharper, cleaner kind of press action than it would if you opted for the more tactile, bumpy brown switches.

Red switches are generally considered the best for gaming due to their fast, smooth keystrokes, but they were still great for typing on day-to-day, even if their overall noise level were so high that they could be heard clacking away in all corners of my home. Brown switches, meanwhile, are a fraction quieter and have a little bump when you press them down, giving you a more tactile-feeling keystroke that's a bit slower than red but is largely thought to provide the best of both worlds when it comes to gaming and general typing. 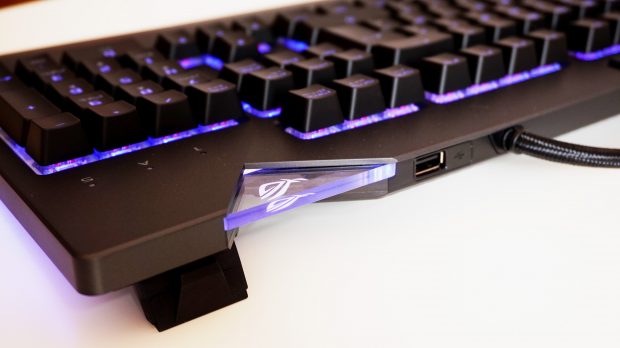 I certainly didn't have a problem with Cherry's brown MX switches when I used them in Fnatic's Streak and miniStreak keyboards - the bump was so small I barely even noticed it - but if you've never used either before then it will largely come down to whether you prefer a bit of resistance when you type (in which case go for brown), or whether you like your keystrokes to be as fast as possible (in which case go for red).

The only thing I wasn't so keen on was the ROG Strix Flare's wrist rest. Admittedly, I've probably been a bit spoiled by the frankly incredible wrist rests on Fnatic's Streak and miniStreak, but when they're hands down (sorry) the best wrist rests on the entire planet, I can't help but want all other keyboards to follow in their footsteps when it comes to overall comfort and flexibility.

For instance, while you can theoretically detach it from the Flare and use it as a standalone wrist rest without hooking it into the bottom of the keyboard - a bit like MSI's excellent Vigor GK80 - its four little feet just aren't quite grippy enough to stay in one place when you're moving your hands up and down the keyboard.

Even the act of attaching it to the keyboard was rather fussy. Instead of snapping it into place like the HyperX Alloy Elite or Corsair K70 Lux, the Flare has two little grooves on its underside that can simply be placed over the rest's corresponding little blobs at either end. This makes it easier to put on and take off, as you don't need to worry about breaking anything compared to its snappy rivals, but in practice the grooves are so shallow (and the feet so small) that you often think you've done it properly when actually you've missed the mark entirely.

It's a minor gripe, all told, as once you've done it wrong once, you'll know not to do it again. Still, it just doesn't feel quite as secure, or as satisfying, as a good old-fashioned snap mechanism, or indeed Fnatic's more pronounced multi-groove system.

Either way, the wrist rest certainly  shouldn't deter you from considering the Asus ROG Strix Flare as your next mechanical keyboard. Personally, I still prefer Fnatic's Streak and miniStreak overall, but the Flare's clean, elegant design is definitely one of my favourites in recent months, and the fact it's both cheaper and more fully-featured than Asus' ROG Claymore makes it much better value.

The Flare will still set you back a not insignificant sum of £140 / $180, but I'd definitely choose it over the £150 Corsair K70 Lux RGB, and I'd even be tempted to pay the extra over the £96 HyperX Alloy Elite as well. In the US, it's a more difficult sell, as there the Corsair K70 Lux RGB costs $130, while the Alloy Elite currently goes for just $110. Still, it's definitely a contender for one of the best gaming keyboards you can currently buy, and if you're after a smart, elegant mechanical keyboard, it doesn't get much better than the ROG Strix Flare.