Cities: Skylines turned three a couple of weeks ago, meaning that it’s time to dust off our best Cities: Skylines mods list and see what wonderful community creations we can fill it with. On the day of its launch, Skylines already had pages and pages of buildings and complicated junctions waiting to be downloaded; now there are 1,000 of them, containing a ridiculous 145,948 mods.

That’s quite a lot of stuff to get through. And you should absolutely give Steam Workshop a browse -- you never know what you might find. If you don’t want to faff, however, I’ve gathered a bunch of the best, including some personal favourites that I can’t live without. Most of these mods will work with the base game, but there are a few you’ll need one of the expansions for, and remember to check for conflicts. 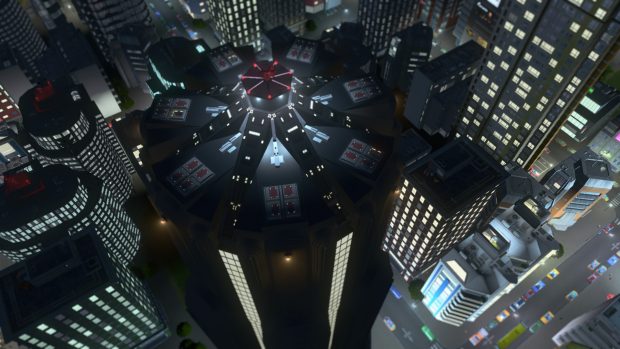 Ghost in the Shell Buildings

The first question I ask myself when building a new city is how futuristic and gaudy do I want it to be? The answer is always: as gaudy and futuristic as possible. You’ll undoubtedly notice a theme in this list. This makes the Ghost in the Shell Buildings pack essential, though it’s more understated than a lot of my sci-fi mods, making it a solid addition to a contemporary city as well.

While we’re talking cyberpunk, let’s not forget about Blade Runner. You can’t get more ostentatious than these two buildings. The Tyrell pyramid is particularly impressive, and it’s perfect if you want something in your city that screams malevolence. The police tower looks a little bit off during the day, I think it’s all the black, but at night it’s incredible. 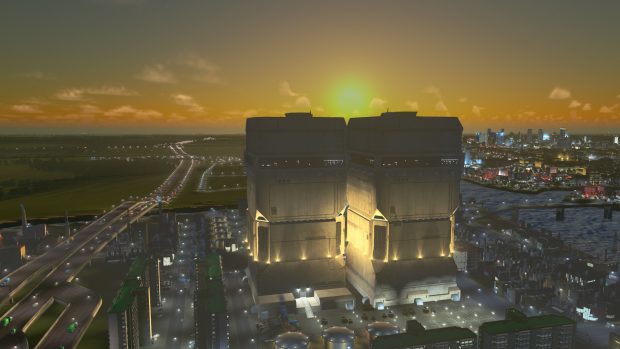 Let’s stay in the future with the imposing, monolithic power station FOGBAE-TOWR4. Is there a hint of Brutalism about it? Who cares, it looks bad ass. It’s also practical, providing electricity for all the terrified ants scurrying below. Get this building to let all your citizens know that the state will crush them.

Okay, Okay, you don’t all want futuristic cities. Gula’s Architectural Designs is a 24-item collection from the titular modder, and it’s a corker. It contains everything from a giant hamster statue to a KFC, Taco Bell combo. There’s plenty inbetween, too, including schools and skyscrapers. It’s a diverse, high-quality pack.

The Quad Collection contains a whopping 166 items, and while I’m a fan because of the vast number of flashy sci-fi or sci-fi-adjacent buildings like Xenophilia, it’s also full of contemporary skyscrapers and offices that would fit perfectly in any modern city. If you don’t want to sift through hundreds of buildings, this is a great time saver.

I love it when cities try to hide large buildings and infrastructure, making them seem more open, so I guess I like sunken train stations too (whether in brick and concrete). If you’re looking for subtlety over flair, then this is the transport link for you.

But if you want a train station that’s also an in-your-face piece of architectural art, then you’ll be wanting something like Amsterdam Centraal Station. It’s a gorgeous six-track station based on the real Amsterdam Centraal, and it’s fat with details. Just take a peek inside! 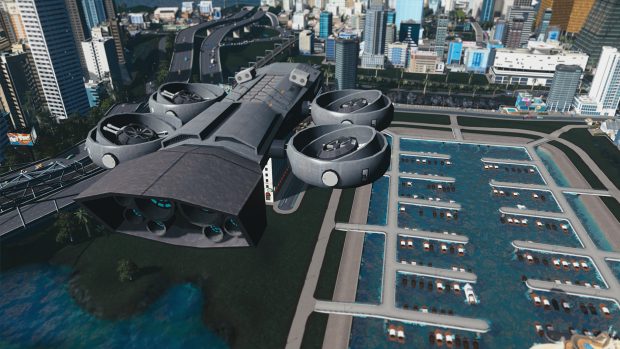 This collection of junctions is a mainstay for me, and has been since just after Cities: Skylines launched, though it’s grown a lot since then. I love making road networks, as I suspect anyone who came to Skylines after Colossal Order’s Cities in Motion would, but it’s tricky and takes up a lot of time. Timboh’s Marvelous Interchange Emporium alleviate some of the pressure, and show you want talented people can do with some tarmac.

Sharp Junction Angles does what it says on the tin, allowing you to make sharper angles when constructing roads, freeing you up to make a more elaborate, fine-tuned transport network. It also comes with Road Anarchy, a crazy mod that lets you make physics-defying streets that wouldn’t look out of place in Trackmania. 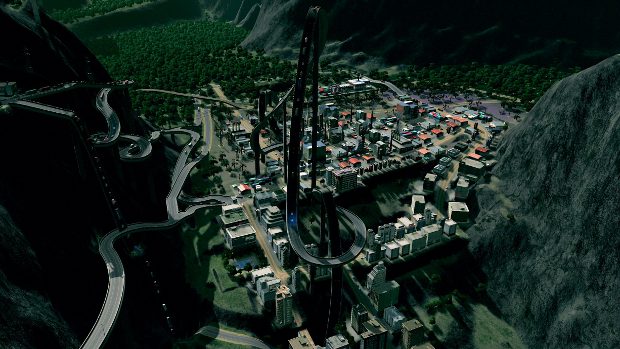 Speaking of Road Anarchy, here’s its bigger sibling Advanced Road Anarchy. It’s largely the same mod, allowing you to throw caution to the wind and construct the most dangerous, ill-conceived motorways anyone has ever concocted. But it also has buttons, an options panel and info text.

When the Mass Transit expansion came out, we finally got chubby blimps that could fly around the city, picking up and depositing excited citizens and tourists. Blimps are pretty retro, though, and by now I’m sure you know what I like. Yeah, let’s turn those blimps into helicarriers. The CTCN Transport is a functional blimp, but sexier. Fill the skies with them!

Planes deserve some love, too. The Better Planes Pack introduces two plane types and eight liveries to make them stand out. Right now they’re mostly US planes and paint jobs, but more international ones are coming. And while they’re functional planes, there are also prop versions, allowing you to dump them anywhere. 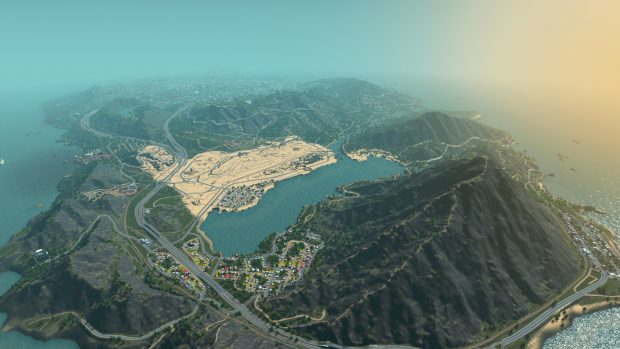 When the Mass Transit expansion arrived, it came with some transport-specific scenarios, but what if you don’t have Mass Transit? Belmont County Transport is a scenario map that tasks you with linking a bunch of little towns together, transporting 1 million citizens in 750 weeks, without using the metro. Try not to use other transport mods if you want the full challenge. 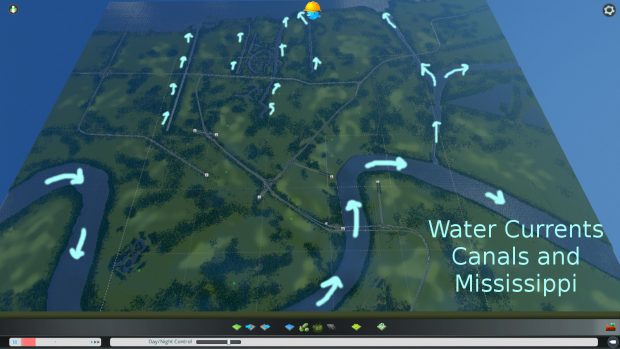 If you’ve got the Natural Disasters DLC and are looking for a scenario to test your sanity and ability to remain calm and collected during a crisis, you might want to take a gander at New Orleans Disasters. The map uses realistic elevation and sea levels, so it’s extremely prone to flooding.

It’s not a proper city builder without a nice big map of New York to play with. This is just a really cool space to build a city on, whether it’s your own version of New York or something entirely new.

You’ve wandered around the map for 100 hours, now build a modern city on it. Skyrim is an unusual, tricky space to build on, but it’s also one of the most stunning Cities: Skylines maps that I’ve seen. There’s such a huge attention to detail that I feel terribly guilty plonking down big, ugly industrial buildings. This is definitely a map you’ll want to build a green city on.

One of the first big map mods, GTA V’s Los Santos remains one of my favourites. Like the Skyrim map, the limitations force you to really plan ahead and make a city that conforms to the dramatic environment. 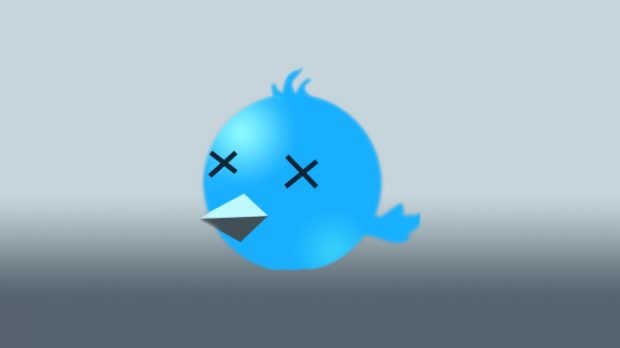 What do your citizens see when they walk through your city? This first-person camera mod lets you see through their eyes. It’s pure novelty, but ever since Dungeon Keeper let me possess my minions, I’ve always had a soft spot for management games that let you get down to street level.

This mod unlocks the whole map, expanding the building zone from 25 tiles to 81. That’s a big city. You can unlock them one-by-one, just like you normally would, or all at once, letting you expand in all directions straight away. This will obviously have a performance impact, especially once your city starts growing.

Burned down and abandoned buildings linger, ruining property values and making your city look hideous. Demolishing them one by one, especially in a huge metropolis, is a right pain in the arse. This makes Automatic Bulldoze, which knocks them all down at the touch of a button, absolutely essential. 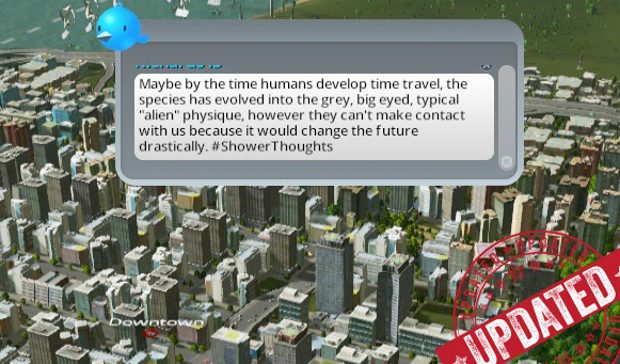 Chirpy, Cities: Skylines' Nazi-free version of Twitter, can now keep you informed of all the newest posts on any subreddit you fancy. See, Chirpy can be useful.

No, Chirpy is a demon who must be excised from the game, and that’s exactly what Chirpy Exterminator does. With it, he’s gone forever, never to ruin your mood with the inane thoughts of your idiotic citizens.

More Beautification introduces props to the main toolbar button under the Decoration tab. You can place as many as 65531 props in the game, though it doesn’t add new props, it just gives you access to the existing ones. Grab Prop Snapping and Prop Anarchy as well, to extend the capabilities of the mod.

We’ve reached the end of list, but by no means the ends of City: Skylines mods. This will be more than enough to get you started, but there’s a whole universe of weird statues, spaghetti junctions and towering skyscrapers out there. And as always, if you’ve got some favourites that haven’t made it onto the list, let the world know in the comments.